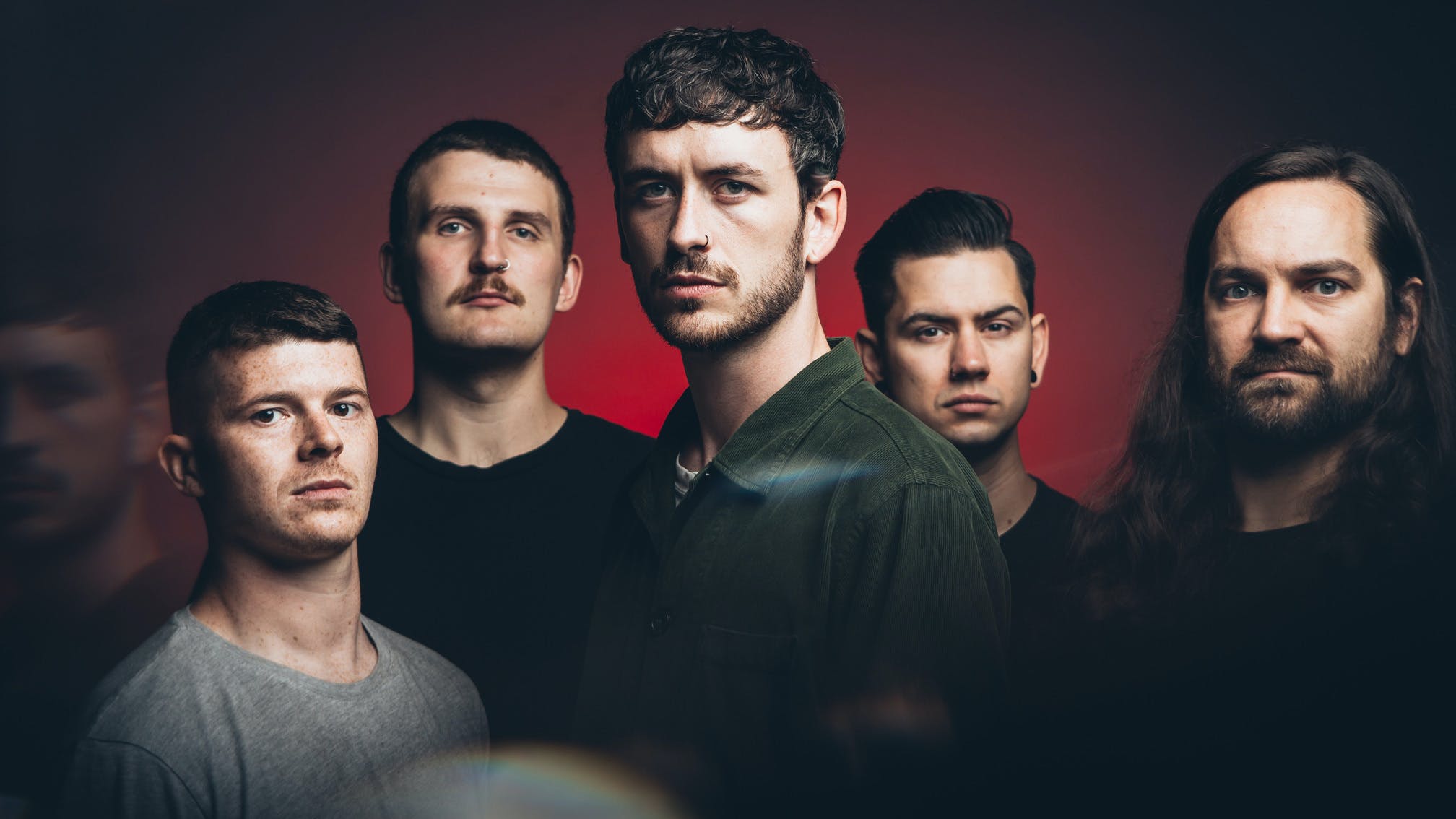 Some bands are able to forge an entire career producing variations on a theme. AC/DC have just proven that a simple formula can remain effective pretty much forever and the same thinking can apply even in the foetid depths of the underground. Hardcore in particular is filled with acts that rely on aggression and intensity alone. There’s nothing wrong with that, and there’s a thrill to be had in a familiar format done well. But for other bands, stasis equals death.

When Palm Reader first emerged almost a decade ago, they were frequently referred to as the UK’s answer to The Dillinger Escape Plan. It’s not a description they particularly agreed with – frontman Josh McKeown tells Kerrang! today that the constantly applied tag “felt a bit lazy” – but you can see why the ferociously technical assault of their 2013 debut album Bad Weather and the rampant energy of their live show drew comparisons to the New Jersey luminaries.

Since then, they’ve made it their mission to stretch their creative muscles and test new ground, while still retaining the furious bite they started with.

“We’ve always been of the opinion we’re never going to write the same album twice, or even the same song if we can help it,” nods the vocalist. “We try and explore as much as possible in terms of our sound, so evolution and progression is the only way. If you’re not doing that then you're sitting on your laurels and playing it safe. You get stagnant and that's not what it's about for us.”

While you can certainly trace that willingness to try new things back through their first releases, it’s started to accelerate recently. Last album Braille was a far more dynamic record than its predecessors, but brand new full-length Sleepless is the single biggest leap that Palm Reader have taken so far. Those dizzying mathcore flourishes are pretty much gone, replaced by far more nuanced textures. There’s still plenty of aggression on display, but it’s no longer the defining characteristic and the album ebbs and flows with a dramatic, almost cinematic intent.

So was it a conscious decision to make such a bold step forward?

“I don’t know if we tried to do it, but we definitely took a bigger step sonically with this record than we have in the past,” Josh says.

“I don’t think it was a case of looking to see where we wanted to go, more looking at what we'd done over three records and going, 'Maybe it's time that some of these elements have run their course,’” adds guitarist Andy Gillan. “I don't think there are any fast, techy elements to it, so it was seeing what would effectively and tastefully fill that void. That was quite exciting, because it gave us a whole new set of markers for experimenting and trying new things.”

Not that the writing and recording process always went entirely smoothly. Andy describes Sleepless as a “fun but frustrating” record to write, and it did spark some internal disagreements within the band.

“On [the song] Brink, we all had a huge argument with Dan [Olds, drums] because he didn't like the way it started. It kind of had a northern soul vibe going on it's all led by the snare,” the guitarist says as he taps out the beat over our Zoom connection. “Once all the other elements were brought in, the keys and vocals, it became a different beast. He loves it now, but the bits that nobody talks about are the bits that aren't fun and joyous…”

Sleepless is not a lockdown record. It was predominantly written in the second half of last year and recorded in January. The release was pushed back a little, like so many others, but despite that relatively fortuitous timing – the band had planned to take some time off between making and releasing the album anyway – the lyrical themes of the album seem perfectly suited to these tumultuous times.

Palm Reader have previously written a lot of songs about standing up and rising above your problems. Like pretty much every other hardcore-oriented act, frankly. If there’s one thread running through Sleepless, though, it centres on and spirals around the theme of empathy.

“It's a question of getting people to think about what it is they're doing, saying and thinking and how they affect the world,” says Josh, who serves as the band’s primary lyricist as well as singer.

This time out he explains he made the conscious decision to “explore other points of view or try and write from a storytelling perspective”, and that has led to some surprising areas. The emotionally wrenching Willow, for example, deals with the pain of losing a child. It was inspired by the story of a friend who met up with a young woman he had not seen for years in the Willow Suite of a children’s hospice.

“I took a deep dive into what the willow tree represents, because in some cultures and that they're a safe space kind of thing,” he says. “I took that and tried to write about the strength of mothers. It’s the hardest thing you can imagine – especially for a young mother. I'd like to bring the vulnerability in my writing to the forefront, because usually it’s all about strength and honour. It’s because it's such an aggressive sound, but you can use that sound and that passion and intensity to write about something that's not necessarily big and aggressive, but is more deep and meaningful.”

Keeping with that theme of vulnerability, A Bird And Its Feathers is a bona fide love song. Again, this isn’t overly common in the realms of hardcore – even if Josh adds that it’s also about how love can feel like “a dark spiral… that’s intoxicating at same time as being the best thing that ever happened”. Previous single Hold/Release, meanwhile, deals with the inability – particularly in men – to open up and communicate.

“An aspect of masculinity is not talking and that's awful. The consequences are fucking dire,” Josh sighs. “All you have to do is look at suicide rates in the UK and a lot of that is having no-one to talk to or not feeling like you can talk. I'm trying to encourage people to talk; it would be nice to have a positive effect on the situation, even slightly.”

As for Andy, just playing in a band like Palm Reader gives him a vital sense of release.

“I have to play this kind of music really loudly to vent in ways that I can’t do verbally,” he explains. “It's incredibly cathartic, just being able to stand in front of a loud amp and feel your teeth rattle. Then when you combine that with the synchronicity of playing with other people and creating something that's more than yourself, there's nothing can touch it. Which is why I think that this year's been really hard – not just for bands, but anyone that enjoys live music.”

The ongoing pandemic has, of course, had a major impact on tour-intensive bands like Palm Reader, for whom the live show has been such a major factor. It also means that Sleepless is being dropped into a whole new environment with, according to Andy, all their prior plans for promoting it via gigs “in the fucking bin”.

What happens to it now is largely out of the band’s control, but there’s no doubting that they’ve made one of the finest albums to have emerged this year. It’s beautiful, brutal, accessible and challenging all at the same time – and it sets them up to go pretty much anywhere from here.

“We're diving a bit deeper into the ocean of what I would consider to be Palm Reader's potential sound,” smiles Josh. “It's us finding our feet and feeling more comfortable with the fact that we don't have to sound like anything. We can do what we want how we want to do it.”

For anyone willing to join them, that sounds like it should be quite the ride.

Palm Reader's Sleepless is due out on November 27 via Church Road Records.