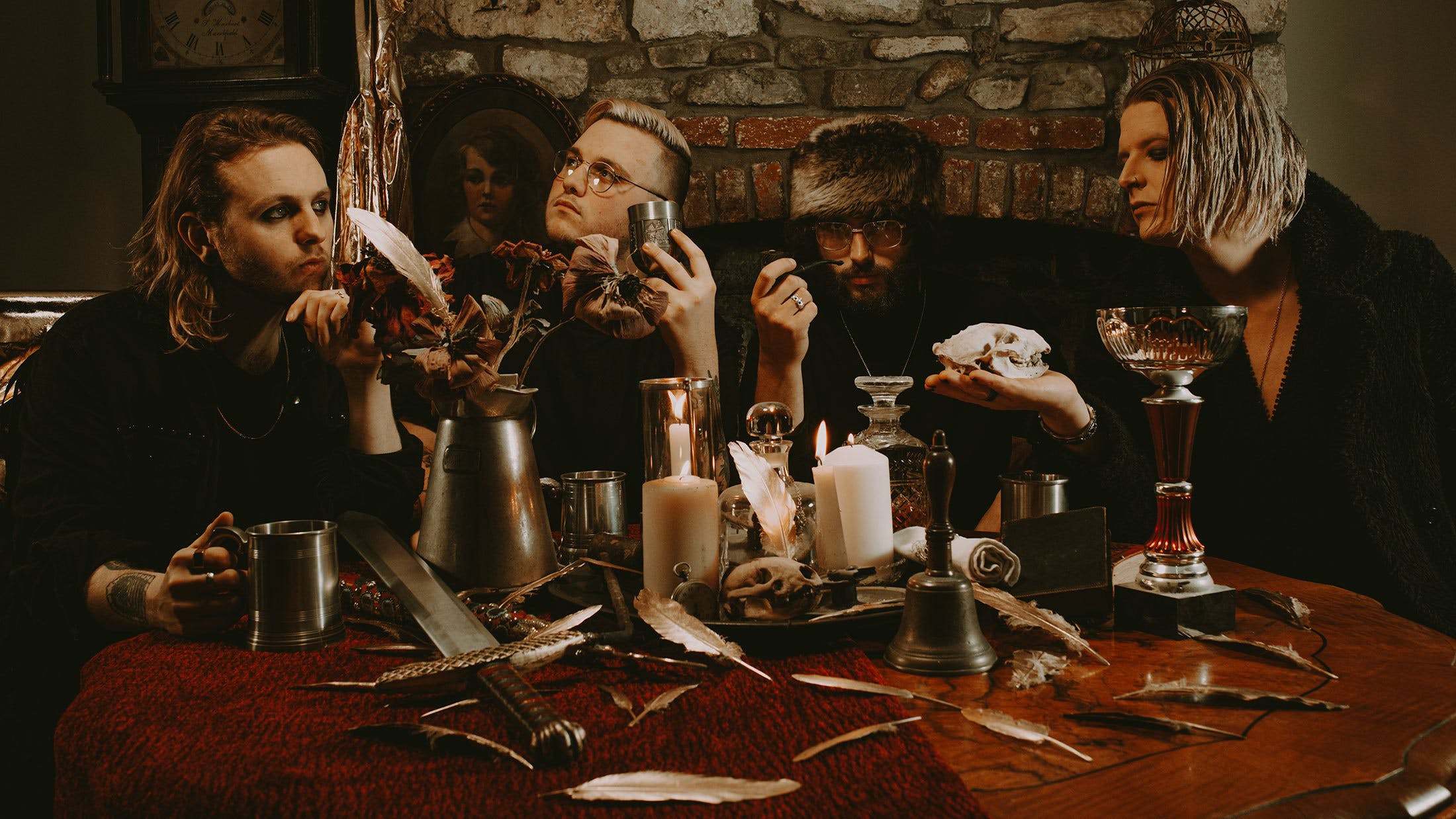 Phoxjaw aren’t your average band. Formed in Bristol in 2016 by vocalist/bassist Danny Garland and guitarist Josh Gallop, the music they make spans the whole gamut of rock, the four-piece – completed by guitarist Alexander Share and drummer Kieran Gallop – having released everything from indie-rock earworms to desolate, black metal-esque ragers.

Likewise, when it comes to the music’s lyrics and themes, eclecticism is key. Debut EP Goodbye Dinosaur was inspired in part by Danny’s childhood love of all things prehistoric, whilst their superb follow-up, A Playground For Sad Adults, covered self-described “football anthems”, depression, heartache and more. For their first full-length album, Royal Swan, released in July via Hassle Records, Phoxjaw have once again thrown themselves down the rabbit hole and come out with a gloriously off-kilter collection of songs that are uniquely theirs.

“We like flipping things on their head,” Danny begins when quizzed about the direction of Royal Swan. “Initially, the intention was to really go down the route of incorporating a strong medieval theme into the record. It didn’t quite end up as a full-blown concept album, but there’s definitely a ritualistic and Pagan vibe to Royal Swan. Take a song like Charging Pale Horses: it’s got a real ceremonial theme to it, and the album as a whole is built around metaphorical references to British history.”

A seasoned traveller, the idea for Phoxjaw to write an album about representations of Britishness was in part inspired by conversations Danny had with those from other countries. In the age of Brexit and with a history of colonial rule, he came to realise Britain isn’t always held in the highest regard by the international community.

“I was really exposed to the discourse around colonialism and how we should ‘pay for what we’ve done’,” Danny explains. “That attitude definitely exists within Europe because of Brexit. I’ve spoken to many people from other countries about their attitudes towards British people, and, to be honest, it feels like everyone is laughing at us. I’ve seen loads of cartoons in magazines in France and Germany mocking Brexit and the mess it is.”

Having felt an air of hostility around the issue of Brexit while on tour in Europe, Danny felt compelled to write about Phoxjaw’s experiences. But rather than tackle the subject head-on and pen a wholly political album, he made the decision, in true Phoxjaw fashion, to “dress it up in metaphors”.

“I don’t want our music to be preachy – I find that boring,” he says. “Phoxjaw is a fun band, and one that prefers working with fantasy and fiction.”

To get to grips with their feelings about Britishness, Danny and the rest of the band took the decision to isolate themselves in the rural village of Devil’s Bridge in Wales. Surrounded by an area rich in history, Phoxjaw set to work creating an album that simultaneously tackled the anti-British sentiment they’d experienced, and celebrated the mysticism of British history.

“We’d always longed to just chuck ourselves in the middle of nowhere with no distractions and make a record that way,” Danny says. “Wales has an ancient language and it’s a place with a mythical side to it that I really love. We wanted to capture that in the record. Royal Swan has an old, vintage sound, and the location we recorded in really reflects that – it was a jaw-dropping environment to be around.”

Danny describes Royal Swan as an album that acknowledges the anti-British discourse he’s witnessed and flat-out rejects nationalism, but one that also takes the perspective of being proud of where you’re from and “embracing the great people of our country in what is a strange time for us all”.

There is, however, an undeniable tension between those two goals, and a similar such strain was present within the Phoxjaw camp during Royal Swan’s creation. The result of enforcing isolation upon themselves was a particularly tense creative environment, something that was only enhanced by the decision for each band member to record alone in separate rooms.

It was tough going, but Danny has no regrets.

“We definitely all fell out at different points,” he remembers. “But that’s part of the process, especially when you’re as passionate about something as we are. I’m very hands-on when it comes to the creative side – I kind of see myself like a film director – and I write a lot of the music and the lyrics. Consequently, I can be a difficult person in the control room because I don’t like to budge on my ideas. I remember a specific disagreement between myself and the rest of the band about the song Half House. The situation became pretty awkward, even more so because I was going up against [producer] Lewis Johns, who is someone that really knows their stuff. In the end, I had to accept that I’m not always right.”

Ironically, given the current COVID-19 pandemic, Phoxjaw find themselves once again in an environment characterised by isolation. Their experiences at Devil’s Bridge somewhat prepared them for lockdown, although Danny openly admits he’s struggling to come to terms with what is happening in the world.

It would be easy to dwell on the negatives, but the Phoxjaw camp are doing their best to take a more hopeful look to the future. A UK headline tour with Poisonous Birds is booked for February 2021 and several shows have already sold out, while Danny is excited about a split record they plan to release with an as-yet-unnamed band before the year ends. Moreover, plans are afoot for a second album which is all-but written, though coronavirus may put a stop to some of the more ambitious thoughts Danny has for its inception.

“We’ve got an idea of where we want to record, but because of COVID I don’t know that we’re going to be able to do it,” he says. “It’s a shame, because I wanted to get the local musicians from that place on the record and do something like Paul Simon’s Graceland, where he went to South Africa and made an album with musicians over there. Even if it doesn’t work out this time, I’m determined to do something like that with Phoxjaw.”

Whether they can pull off that project remains to be seen, but for now, Danny and his bandmates can rest easy in the knowledge that Royal Swan has confirmed their status as one of Britain's most exciting and innovative rock bands. It’s an album that has exceeded expectations and established them as a true creative force, and despite the strain that came with its formation, Phoxjaw’s frontman would do it all again in a heartbeat.

“I’ve been amazed by how well Royal Swan has done, and how quickly it’s become an album that means so much to a lot of people,” Danny concludes. “I knew it was a good record, but seeing people enjoy it in the way they have has given me a real sense of self-worth. This album makes people happy, and that, more than anything, is what music is about.”

Royal Swan is out now via Hassle Records

Check out the video for Phoxjaw’s new song sungazer, which the band hope “digs deep into your brain and burns out your eyes”.

Come to the Phoxjaw K! Pit in Bristol with Dead Man’s Fingers Rum

Phoxjaw will hit The K! Pit in Bristol next week with our friends at Dead Man’s Fingers Rum – see you there!