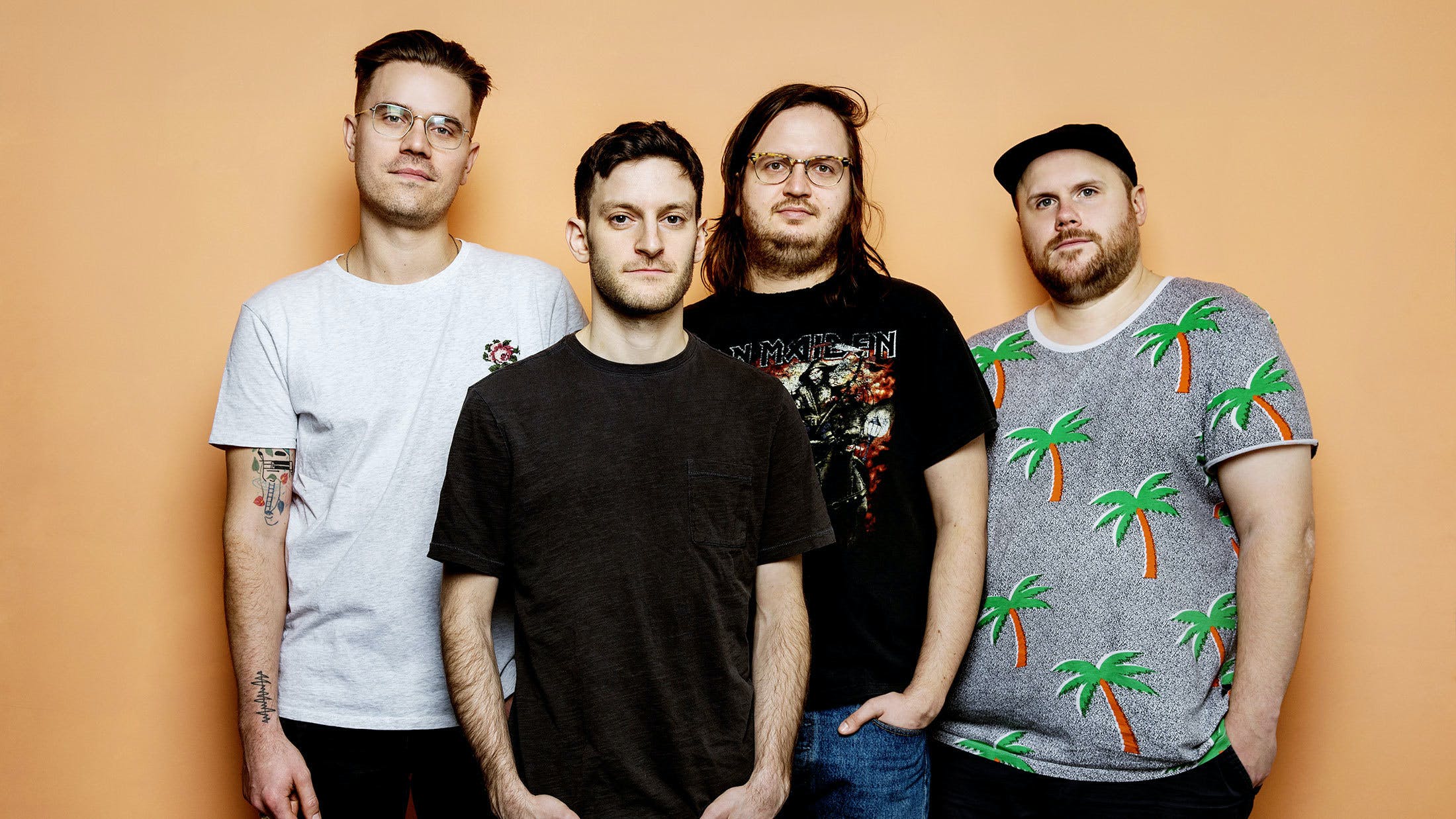 Kerrang! is on a private Zoom chat with one half of PUP, sharing lockdown stories and swapping homemade turkey soup tips. Now read that back and imagine trying to make sense of it 12 months ago. This, though, is the heady reality of life in a punk rock band grounded by the pandemic that’s swept across the globe over the past year.

“I honestly have no clue what I’m doing,” confesses singer and guitarist Stefan Babcock, as he potters around in his kitchen, clanging spoons and pans in mild distress.

“I tend to use a crock pot slow cooker,” chimes in fellow six-stringer and backing vocalist, Steve Sladkowski, keen to offer some calming words of advice across the digital streams. “You’ve just got to get a rolling boil and let it go from there. In fact, I believe that’s where the word ‘simmer’ comes from…” he trails off, suddenly aware that etymology and culinary insights, riveting as they may be, probably aren’t what we’ve dialled in to catch up with the Toronto gang about.

This is the truth of the matter, though. This should have been the year that PUP hit the stages of Coachella and Download Festival, for example, taking advantage of the momentum kickstarted by the raucous fun of 2019 album Morbid Stuff. Instead, they’ve been making soup. Chances are, all of your favourite artists have been doing something similarly ordinary.

“Staying at home, making soup, talking about soup… it’s a great time to be a rock band!” Stefan jokes, poking fun at himself and the obvious pathos of the situation. But nobody is really laughing. Making soup might just be the highlight of his day today, offering welcome respite and a sense of purpose that differentiates it from yesterday, a day which could have been a Monday, Wednesday or a Saturday for all anyone really knows anymore. When the world around you is crumbling, however, perhaps the best and only thing to do is close ranks, find comfort in the mundane and take control of what you can, however minor it may seem. There’s grace in that.

“I would kill for a Tesco Meal Deal right now,” says Steve, offering a surprise response when prompted about what he’s missed most about touring in the latter part of 2020 – the elephant in the room of pretty much every music discussion right now. “We were talking about this in our group chat the other day. I would absolutely fuck up a Cheddar cheese Ploughman’s sandwich in, like, Birmingham, or wherever. As much as I was maybe a little more burnt out than I was willing to admit when lockdown began, I miss the road way more than I thought I would. It's like a part of me is missing.”

It gives fresh poignancy to the double meaning, in-joke-made-public title of new EP, This Place Sucks Ass, a reference to what the quartet – completed by bassist Nestor Chumak and drummer Zack Mykula – used to say to each other as they rolled into whichever beaten-down town their tour schedule had brought them to on any given day.

“This is a band that wrote a song called If This Tour Doesn't Kill You I Will,” the vocalist says laughing. “That’s always been tongue-in-cheek, about how much we whine about touring, but we love it really and we love each other. We're rehearsing for our first ever livestream right now and it's fucking hilarious to play that song.”

Time, seemingly, has a great sense of irony and humour.

On the bright side, had PUP not been forced to down tools and call temporary time on their eight years of almost constant touring, the six songs of This Place Sucks Ass might not have ever seen the light of day. Characteristically seething new tune Rot most definitely wouldn’t have, informed as it is by events of the past few months. Fittingly recorded in a Toronto studio with band members socially distanced as producer Dave Schiffman Skyped in from Los Angeles (“To pretty much tell us that we fucking suck”), it finds Stefan sneering ‘I’m doing something productive with my self-destruction / It’s the one thing keeping me sane’ as the song lurches towards its mid-point explosion.

“That’s almost this band’s motto,” he explains. “In every PUP song that’s angry, dark, sad or whatever, there is always a silver lining. We make sure that there is, because I don't want to make music that’s sad for the sake of being sad. That doesn't help me as a writer, and it doesn't help the listener. There’s nothing worse to me than self-serious emo.

“We all have negative emotions,” he continues, stressing how pivotal this track has now become in the PUP story. “The point of us playing in a band together and making these songs has always been to take those emotions and to try doing something positive, so that we can feel good about ourselves and our contribution to the world. Rot is angry, anxious, frustrated and fired up. All that pent up aggression comes from what's been happening in the world, but even if the song’s dark, there's a joy in us four friends being in a room together, making something awful fun.”

It’s a neat encapsulation of where PUP as a collective find their heads at, given everything that’s happened this year. In merely fighting back, in doing something and refusing to be beaten by circumstances, they’re winning. Like everyone else, they’ve had no choice but to reflect and take stock on who they are, what they’re doing with their lives and perhaps just as importantly, what they want to do going forward. Naturally, that’s come at great cost.

“This year has wreaked havoc on our mental health,” Steve admits, “but we're in a pretty privileged place. We’ve realised how lucky we are. The four of us as a creative unit have always been steadfast in wanting to improve the work that we do from a songwriting perspective, but that is something we’ve tried to extend to how we conduct ourselves. That matters. We have a platform and we need to use it responsibly, whether that be through charity work or ensuring that it's not just people who look like us on stages alongside us. To try to do better and to be better people is the reason we do this.”

This is a year that has fundamentally changed everything. Within that every single person has been changed too. There will be a tangle of PTSD to unravel in the aftermath and the full extent of the damage may not even be known for a long time to come yet. All PUP know is that they want to make sure they change for the better. Moving forward, they’ll bring that attitude with them into everything that they do. Starting with the small matter of their very first livestream. But if this is where you might expect to hear the big sell, well, think again. This is PUP.

“It might be absolute dogshit!” says Stefan, a man who has never really been one to mince his words. “I’ve hated pretty much every livestream I've seen and in the first couple of weeks of lockdown it seemed like every shitty band was doing one and they all sucked. But we realise it's stupid, dumb and awkward, so we’re big-time leaning into that. We're just trying to find a new way that we can be as PUP as possible, in this weird new world.”

Rather than wallow in self-pity about touring life being stuck on pause, this is an opportunity to try something different. This is just the latest challenge in a long line that PUP have stared down and emerged stronger for it.

“Nothing about this band was supposed to end up here,” says Steve of their resilience and staying power. “If we were anything other than four of the most stubborn motherfuckers you'll ever meet we could have easily thrown thrown our hands up and just gone, ‘Fuck it!’ but we haven't done that yet, and I don't know why it would happen now. We're going to continue creating and trying to be better human beings, both in the band and in the world at large. Either way, whatever happens, that’s who we are.”

“I haven’t even thought about next week,” says Steve, sighing a sigh we can all relate to.

“Buddy,” Stefan begins, “the EP is called This Place Sucks Ass. What do you think our outlook is? There's nothing for us to do now except plough forward and try to figure out how to be a punk band in 2020. It’s going to be rocky to begin with, but we're gonna figure it out, because we always figure this shit out. We have to – none of us have any other skills!”

With that, Heinz, Campbell’s and PUP fans alike will rest a little easier tonight.

This Place Sucks Ass is out now and is available to buy/download and stream.