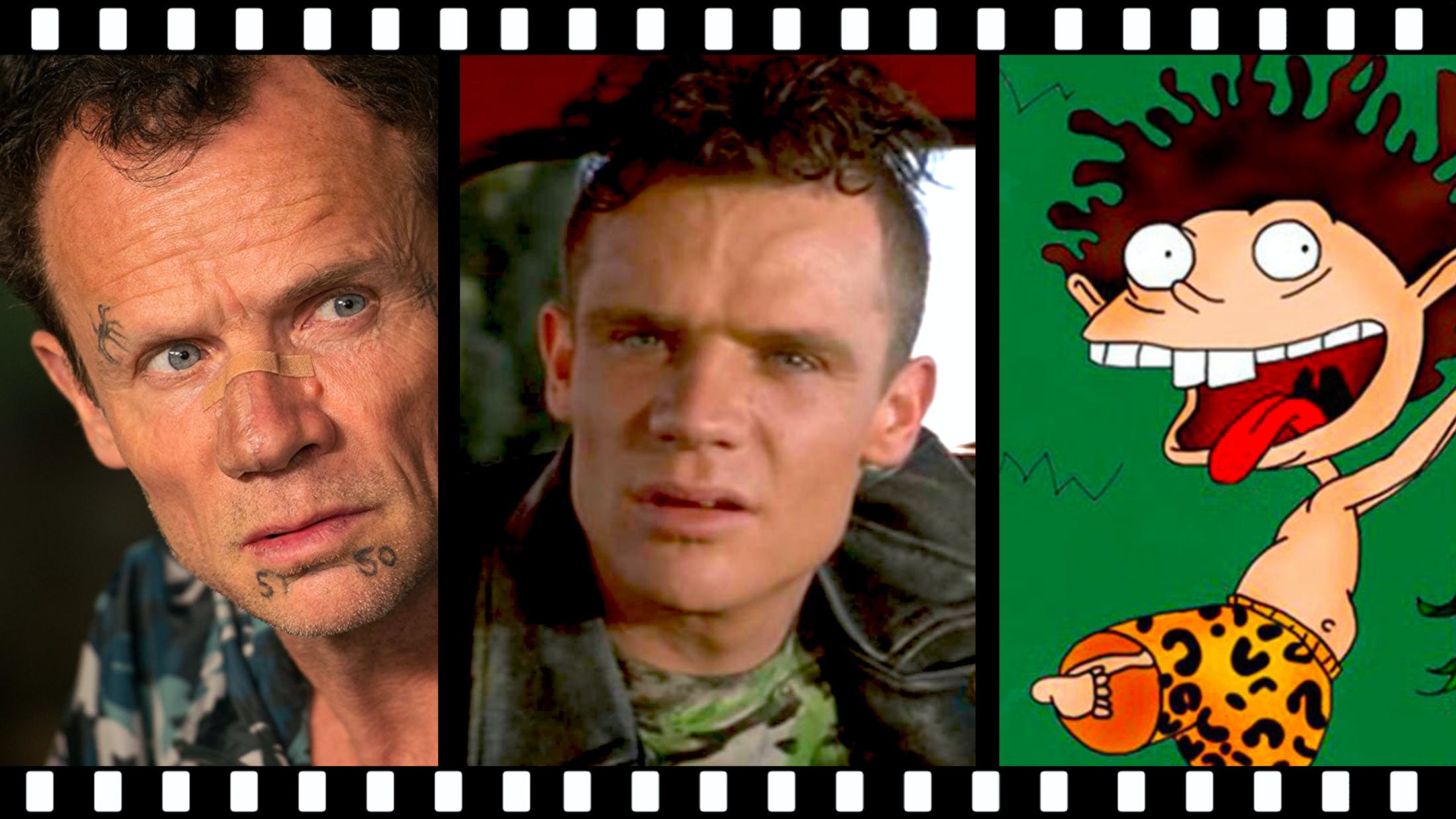 There’s a lot more to Michael Peter Balzary – aka Red Hot Chili Peppers’ Flea – than just poppin’ and slappin’ the bass for the Californicating funk rockers. For a start, before RHCP burst onto the Hollywood club scene, he was actually quite an accomplished jazz trumpeter, and he still busts out the horn every now and again. Even more frequent, however, is his foray into acting, something he started in the mid-’80s. In fact, his first role – as a punk upstart called Razzle in the film Suburbia – was filmed before RHCP even released their self-titled debut album.

Here, we run though the gap-toothed hero's 10 greatest acting moments, however brief they may have been.

One of Flea's most recent full-length movie roles was in Edgar Wright’s acclaimed film about a young getaway driver. Flea plays the part of Eddie, the hardened criminal upset that he has to wear an Austin Powers Mike Myers mask for a hold-up rather than a Halloween Michael Myers mask. It's an easy mistake to make. Still, it shows how effortlessly Flea can combine scary tough guy attitude with comedic silliness.

Given his musical history, both as a jazz trumpeter and within the hedonistic world of the Red Hot Chili Peppers, it’s little surprise that Flea didn’t just star in this film but also executive produced it alongside bandmate Anthony Kiedis. The film follows the (true life) story of Joe Albany, an accomplished jazz pianist who struggled with heroin addiction. Flea plays Joe’s close friend (and fellow addict) Lester Hobbs, but be warned – it’s a pretty unflinching look at drug addiction.

While Biff Tannen is Marty McFly’s main rival in the Back To The Future series, fellow school acquaintance Douglas J. Needles – played by Flea – also has something of a rivalry with Michael J. Fox’s character. In the second film, he appears as an older version of the character and convinces a similarly aged Marty to participate in a shady business deal. Were it not for his tooth gap, he probably wouldn’t be recognisable, caked as he is in layers of prosthetic make-up.

Okay, so technically it’s the same role as above, but in this instalment, Flea plays a much younger version of Needles here, so it’s almost a different character. Now appearing as a young whippersnapper in a leather jacket and a punkish hair style, he challenges Marty to a drag race in town (and, thankfully, not in the old Wild West). And while Marty – literally – backs out of it, it nevertheless alters the course of his future.

This classic Cohen brothers film follows the antics of unemployed slacker The Dude, played exceedingly convincingly by Jeff Bridges. In a typically weird and off-kilter Cohen brothers fashion, however, at various points The Dude encounters some German nihilists, who act as foil to his easy-going, 'whatever, man' attitude to life. Flea plays Nihilist #2, aka Kieffer, who speaks his few lines with an accentuated (but not too over-the-top) German accent. He doesn’t get much screen time, but to just hear him order a “Lingonberry pancake” is a (nihilistic) joy to behold.

Based on the animated TV series of the same name, this film – which follows protagonist Eliza Thornberry on a quest to save a cheetah cub from some poachers – shows Flea is just adept at voice acting as he is at the real thing. By which we mean the high-pitched, hyperactive yelps of the feral child Donnie that he voices sound nothing at all like a noise Flea could possibly make. But he does. And it’s weird and kind of awesome. It’s not the only animated role he’s had, either – Flea also voiced Mind Worker Cop Jake in 2015’s Inside Out.

Not, Alfred Hitchcock’s 1960 original, as that came out two years before Flea was even born, but Gus Van Sant’s almost shot-for-shot 1998 remake. Flea makes a cameo as meek store clerk Bob Summerfield, who works for Sam Loomis, whose estranged wife checks into the Bates Motel. And we all know how that goes, don’t we? In the original film, Bob – played by Frank Killmond – is smartly dressed with a shirt, tie and sweater. In the remake, Flea looks like he’s about to go to band practice.

Another Gus Van Sant film – we’re getting a Tim Burton/Johnny Depp vibe here – this movie is loosely based on three of William Shakespeare’s historical plays (Henry IV parts 1 and 2, and Henry V) and stars River Phoenix and Keanu Reeves as teenager hustlers on a voyage of self-discovery (who also turn gay tricks in Portland to get by). Flea plays fellow hustler/rent-boy Budd, the acquaintance of Bob Pigeon, who oversees all of the hustlers, and to whom Budd – a recasting of remains thoroughly (and believably) devoted until the end.

Flea wasn’t the only musician to star in this movie. Following the adventures of a man (played by Charlie Sheen) who, wrongfully convicted of a crime, kidnaps a wealthy heiress (Kristy Swanson) in an attempt to escape prison, it also features Anthony Kiedis and Henry Rollins. Flea’s role is as a monster truck driver who attempts to knock Sheen’s vehicle into the guard rail while screaming “Time to be heroes!” – although things don’t quite work out as he probably expected.

Directed by Penelope Spheeris – who had been behind 1981 punk documentary The Decline Of Western Civilization and who would go on to make Wayne’s World – this movie came out either the year before or a few months before the first Chili Peppers' album, depending on where in the world you lived, and tells the story of a hitchhiking teenage runaway called Sheila. Flea, who’s listed as Mike B. The Flea in the credits, plays Razzle. Confusingly, he’s addressed by another character as Flea, but then corrects him: “Hey, my name’s Razzle, man.” Whatever you say, Flea. Sorry, Razzle.

Henry Rollins' famous 'talking shows' are set to hit the UK and Europe next year, as the punk legend will be crossing the pond for a 43-date tour…

Every time a band showed up in '90s movies

Bands sure loved making movie cameos in the '90s. As this exhaustive list will attest...

Henry Rollins Gets Shirtless And Paints With The Shirtless Painter

The punk icon is a man of many talents. Watch out, Picasso!