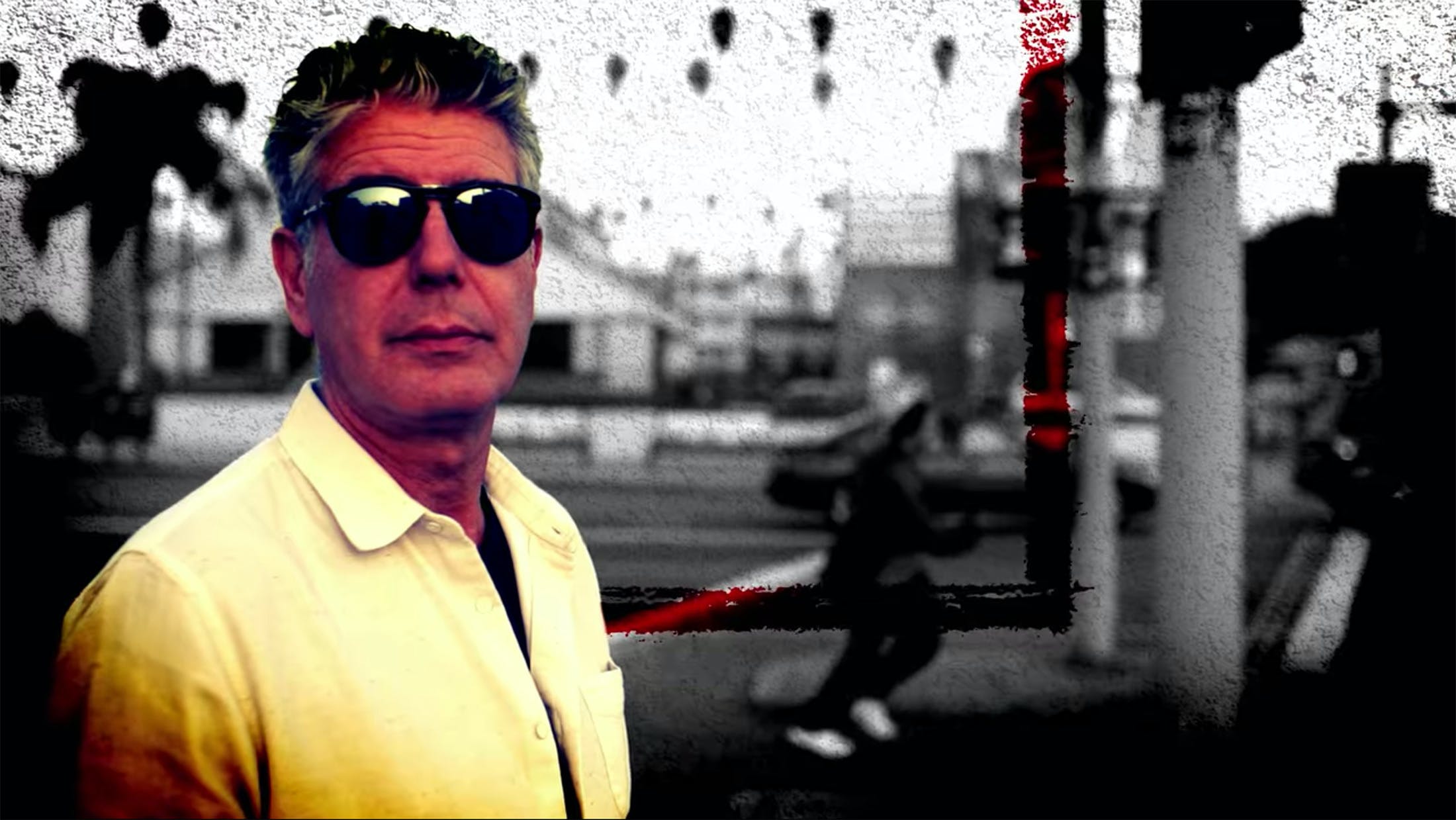 Until his passing in June 2018, Bourdain made a name for himself first in the kitchen and later as an author, journalist and documentary maker. Through his books, his TV shows and his cooking, he touched the lives of many, dedicating his later years to understanding people, places and cultures through his travel series including No Reservations, The Layover and, finally, Parts Unknown.

But the man was also a huge music nut, with a penchant for punk rock that leaked not only into his kitchen, but also the books he wrote and the shows he made. In his breakout best-seller, Kitchen Confidential: Adventures In The Culinary Underbelly, he described the process of putting together a kitchen crew, as recruiting "every young, pot-smoking, head-banging hooligan we’d ever worked with, filling their heads with dreams of glory. We’re forming… like… a rock’n’roll band, man, an all-star group of culinary superstar… kinda like Blind Faith."

Bourdain walked tall, kicked ass and imbued everything he touched with the holy spirit of punk rock. He was once quoted as saying, "I like my food like I like my music: loud, fast and sloppy." He also famously cooked for some of his favourite artists at the legendary punk venue CBGB in his home city of New York, stating, "Since most of our favourite musicians had no money, we fed them for free in our restaurants in exchange for tickets." And if that isn’t punk rock, we don’t know what is.

His humility, wit and charisma attracted the likes of Bill Murray, Sean Penn and even Barack Obama (notably, while in office) to join him in far-flung cafeterias to pick over a meal and talk about life. Over the course of his career, the great and the good of rock’n’roll also sat down with him in front of the camera – and it made for compelling and award-winning viewing. So respected was Bourdain by certain members of the rock world that Parts Unknown’s theme tune was even written and performed by Queens Of The Stone Age’s Josh Homme and Mark Lanegan.

So, to mark Bourdain Day – a commemorative day of sharing memories and travel stories inspired by the late chef, held on his birthday every year – we reflect on some of his most rock’n’roll encounters.

Alice Cooper and Anthony Bourdain met at the shock-rocker’s restaurant/sports bar Cooper’stown in Phoenix, Arizona back in 2008, where the pair talked extensively about their mutual passion for baseball. Following the chef’s death, Alice tweeted, "He was a rock’n’roll guy, he definitely should’ve been in the band. He made it actually cool to be a foodie. May he rest in peace."

Who better to show Bourdain around Armenia than the most vocal Armenian-American in music: System Of A Down’s Serj Tankian? The singer guided Bourdain through not only the country and its rustic cuisine, but also its history, including the Armenian genocide, which SOAD have been instrumental in raising awareness about.

A self-confessed, die-hard Iggy & The Stooges fan, Bourdain met Iggy Pop in Miami while shooting Parts Unknown. Of the encounter, he wrote "Of all the people I've met, I've never been more intimidated, more anxious, more starstruck than when I met Iggy Pop." The two sat down to "eat healthy", a fact that clearly amused the chef, who quipped, "I wouldn’t have thought that, back then, in my dorm room, that all those years later… I’d be eating healthy with Iggy Pop. BBQ shrimp for the godfather of punk!"

When Bourdain took his own life two years ago, Iggy commented, "I’m in shock having just heard that Anthony Bourdain has passed away. I loved the guy, and he was a light of kindness and good vibes in my life."

The Dead Weather and The Kills frontwoman Alison Mosshart welcomed Bourdain into a house party at her Nashville home, Disgraceland. The chef made himself useful in the kitchen and Jack White also made a small cameo as Alison and Bourdain were getting tattooed. What a party. Interestingly, when he visited London, who was there to take him out drinking? Alison’s The Kills bandmate, Jamie Hince.

Producer to Nirvana, Pixies, Jawbreaker, Mogwai and more, Steve Albini joined Bourdain in Chicago restaurant Ricobene’s to chat about the local music scene and enjoy a steak sandwich. Sometimes the simple things in life really are the best.

Josh Homme In The California Desert

Bourdain visited Josh Homme’s Rancho de la Luna deep in the California desert, hitting up local dive bars, eating BBQ and smashing Josh’s guitar to pieces on a palm tree. The pair were close friends and, after the chef’s passing, the guitarist shared a letter to his daughter. In it, Bourdain recalls an incident in a bar when a fan accosted the musician, resulting in him guiding the fan "by the thorax to a security guard". Bourdain added, “I would have broken my beer glass across the man’s skull and then jabbed the remnants into his fucking neck. That’s the kind of guy I am. I had your daddy’s back – just like he had mine.” Wild times.

Bourdain described guitarist Mark Lanegan – famous for his work with Screaming Trees, Queens Of The Stone Age, Kurt Cobain and many more – by saying, "To my mind, he’s one of the greatest living singer-songwriters making music today. His songs and lyrics, reflective of a long, hard life, cut me right down to the bone." The segment also features Bourdain rolling and smoking a joint soundtracked by Mark Lanegan’s Strange Religion. Just beautiful TV.

Harley Flanagan may be known for his vocals and bass playing in legendary New York hardcore outfit Cro-Mags, but Bourdain saw him play a show in his previous band, The Stimulators, when Harley was just 13. The pair sat down for a chat about their home city in 2016 where the musician revealed that his mum was a huge fan of Bourdain. It’s short and sweet, but genuinely moving stuff.

If you think ‘New York punk bands’, The Ramones are undoubtedly the first to spring to mind. It may come as no surprise, then, that New York’s own Anthony Bourdain was a huge fan of the band and featured Marky Ramone twice on his shows. One notable outing saw them visit the Rock & Roll Hall Of Fame in Cleveland where they reminisced about their love of the genre. Interestingly, Bourdain was such a huge fan of The Ramones, that he was invited to appear in the video for Joey Ramone’s posthumously released New York City (also featuring Andrew W.K.). Skip to one minute and 23 seconds if you want to catch him holding the street sign for Joey Ramone Place.

Bourdain wrote that rock’n’roll has always been about "sex, aggression, rage, self-hatred, frustration, heartbreak, love and the occasional burst of pleasure," and we’re inclined to agree. Today, we’ll be embracing that burst of pleasure to mark Bourdain Day. Turning up a playlist of his punk rock favourites, cooking up something tasty in the kitchen and raising a glass to the greatest rockstar the culinary world has ever seen, Anthony ‘Tony’ Bourdain. Gone, but never forgotten.

If you’re struggling with depression or suicidal thoughts, or just want to speak to someone, please reach out to the Samaritans on 116 123, or visit Samaritans.org.