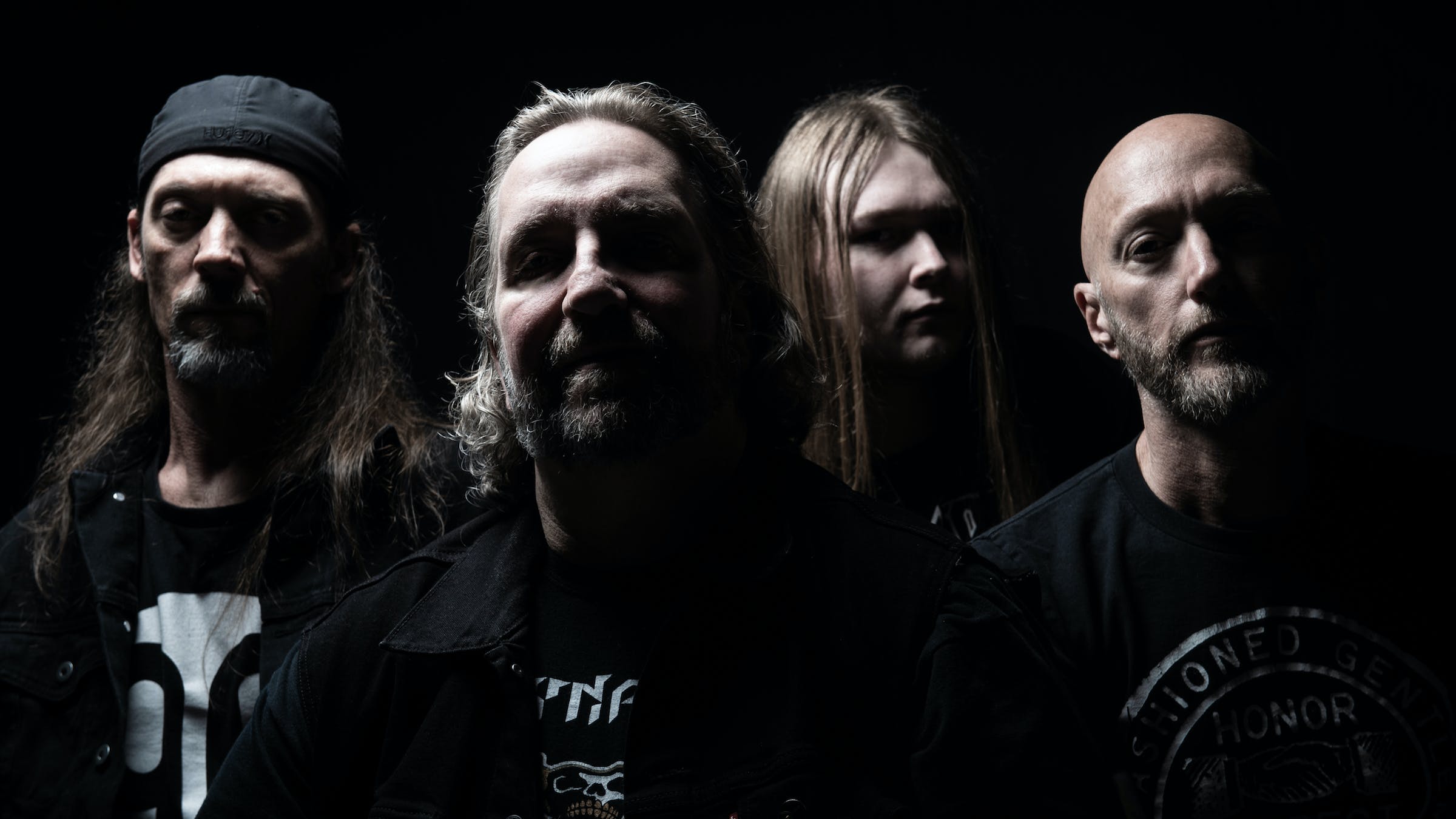 Mention Sacred Reich to your average metal fan, and the imagery and atmosphere that probably comes to their mind involves ripped-up denim, hi-top sneakers, and shotgunned tall boys. And with good reason: in the late ‘80s, the band released some of crossover thrash’s most iconic and powerful albums, most notably 1987’s Ignorance, 1988’s Surf Nicaragua EP, and 1990’s The American Way. But sit down with frontman and bassist Phil Rind in 2019, and the fantasy trappings of thrash take a backseat to a more mature, nuanced outlook on life.

“I’ve been practicing Tibetan Buddhism for the past 20 years,” says Phil with a beaming smile. “It’s been absolutely life-changing to me, and I wouldn't be here without it. It’s the biggest positive thing in my entire life.”

For Phil, Sacred Reich’s comeback and their upcoming new album Awakening -- the band’s first in 23 years -- are all about positivity. His spiritual growth as a Buddhist, coupled with the band’s maturation as people, have added a dynamic new lens to the band’s worldview that overcomes metal stereotypes. And while some contemporary maniacs might roll their eyes at the concept of Buddhist thrash, one listen to Awakening’s burly, old-school sound will have them along for the ride. In Phil’s mind, that satisfaction -- the love of the music above all -- is what really matters.

“For me, [Buddhism] the best thing to do, but it’s certainly not for everyone,” he laughs. “My kids don’t even fully get it. But if they’re ever ready for it, that’s when it’ll be the time for them. There’s the phrase, ‘When the student is ready, the teacher will appear.’ You can teach something a hundred times, but it won’t go through to them until they’re ready. I’m just trying to do my best. My lyrics on the new record are overwhelming positive, encouraging, and hopeful. Sometimes we forget that things have always been the way they are. The wonderful and the terrible come at the same time, and it depends on what we focus on.”

Most people would think of Tibetan Buddhism and hardcore thrash metal as being at odds with each other.

That would be a huge misunderstanding. Why do they have to be mutually exclusive? Just because they’re not a natural combination? One thing has nothing to do with the other. On this new record, I want to be a lot more positive. You take everything as it comes, accept things as they are. Don’t fight the world, go in the stream and flow with it instead of trying to swim upstream. We gotta accept the way things are and not be angry and fighting the world. Who are we to tell the world what it needs and doesn’t need? I think if we all take a deeper look into ourselves, we’d be a lot happier and better off.

Was there a specific moment where you--

There always is. Whenever you meet someone with a religious thing, it’s usually from a traumatic experience. You meet a convict who found God in prison, or a family who lost everything and then turned to religion. It’s just something that you can turn to and find comfort in when you’re in your time of need. You try finding a deeper meaning in it, and go 'What the fuck is this, what have I done?' Same for me: I split with my wife, my stripper girlfriend just cheated on me with my best friend, it was Christmas and my kids were away from me, and I was just like, ‘What the fuck happened, man?’ I didn’t want to be there. I did it all to myself. Karma. Every action you’ve done led to this place, so you better try changing your path. That’s when I came across Buddhism.

Speaking of your lyrics, I wanted to ask about your anti-Trump song, Don’t Do It Donnie, that you released on your split with Iron Reagan. Interestingly enough, it’s not saying, “Go fuck yourself, Donnie,” but more like, “Please don’t kill us all, dude.” It’s more of a plea than an attack or insult.

I feel bad for him. Deep down inside, he’s really in over his head and just doesn’t really know what to do. He’s absolutely not prepared. Anyone whose done a job that they were woefully inadequate for, they know that feeling, even if they’re this narcissist who doesn’t want to admit the problems that are fronting them. It’s gotta be really hard every day that you don’t know what you’re doing. I just hope he doesn’t fuck shit up. But also, we’ve been through so much shit, from Civil War to Black Plague to the World Wars -- it’s gonna be okay. If it’s for eight years, people are going to get hurt and displaced, and lots of fucked up shit, but it’s going to be okay. I’m not a fan of Donald, but I can’t be enraged all the time for the next four years. Who does that help?

That’s interesting, because for a lot of people, thrash metal has a political edge that thrives on outrage. It’s self aware to a point of anger. Like, look at how awful all of this is!

People don’t know better, that’s why. I always ask my kids how they feel when they’re angry. Do you want to feel angry? No. Why do you then? I’m sorry I turned this into a sort of fucking self-help session!

No, this is amazing! We talk day-in day-out with people about metal, and it’s all about negativity and anger. To hear you talking about using metal in a positive way is super refreshing.

I’ll tell you, man, the new record is called Awakening, and the first track is about breaking through depression and negativity. Like, you’re stuck in a deep, dark place and then you get through it in a positive way. We have a song called Salvation on it, and it’s all about music. Playing festivals and meeting new people. I’ve had people come up to me and say songs like Who's To Blame saved their lives, and that’s just really fucking powerful. I know it’s not about me, but if I can help a person in a tiny way, it’s awesome. I think the reason music is the greatest art form because it creates a real connection between people. When people get depressed, they feel a disconnect. We’re not meant to be like that. We’re all interconnected, and music helps that connection. There’s someone out there that feels like me, which is fucking amazing. Music is the best.

What came together to make this album so strong? The lineup, the timing, your personal experiences? All of it?

Of course, all of it! It couldn’t be any other way. With the band coming together, and Dave [McClain, formerly of Machine Head] coming back…the way everything came together was just organic. Machine Head’s record wasn’t even out yet, so I just contacted Dave, and he was so fucking stoked to do it. He said he needed a year and a half for touring, and it was like, it’s already been 22 years, what’s another year and a half? You don’t want just any ordinary guy, y’know? You want THE guy. So we decided to flesh out the songs and my friend Tim demoed drums with us, and his son Joey did guitars. Then Dave came in, and things didn’t work out with Jason, so we decided to work with Joey.

Joey’s significantly younger than the rest of the band, right?

He’s 22 and he’s just destroying things, with the most positive attitude. He’s a monster in the studio! At first, it was like, ‘Do you really want to tour with a bunch of fifty-year-old guys?’ But he’s kind of like fifty-year-old in a way. He loves all the old music and he hangs out with his dad and his friends, and he’s just super talented. On the second day, I was like, 'You’re our fucking guitar player.' It was just all so killer and pure. The first day in the studio we were just kind of like, 'Are we actually doing this?' We were just pinching each other and smiling. That was the whole process. Everything just came together so naturally.

Going back to Dave -- in your opinion, what made Dave so perfect for the band? Why is Dave THE guy?

Well, first of all, when Greg left the first time [in 1991], he quit just before our tour with Sepultura. He couldn’t do the tour, and we were just wondering what to do for the eight weeks in Europe and nine weeks in the US booked. Then we get a call, and the guy says, ‘I’m Dave, and I’ll be your next drummer.’ So I said, ‘We’ll see,’ and tested him out, and he was perfect. He joined our band, he fit in perfectly. Killer dude, killer drummer, and we loved him. Years back, we played with Machine Head at HellFest, and after they finished their set, Dave came over and jammed with us and then just hung out. I told him, ‘I just want you to know you’ll always be a special part of our family, we love you.’ Then Greg quit the band again, and I called Dave, and he said, ‘I always hoped there would be a time I would be in Sacred Reich again.’ That’s what makes him The Guy.

People always talk about their latest work being their best album, their perfect line-up, and it usually comes off as bullshit -- but it feels like you truly believe it this time around.

It is! It absolutely is. I’m not going to sell it on any other bullshit reason, other than it is our greatest record. Every band says it, but this record is so fucking heavy. I would start crying after listening to it when it was done. It’s 20 years of my life on that record, dude. It doesn’t matter if people connect with it or don’t. It’s all out of our control. It doesn’t matter if nobody buys this record or goes out to see us. At the end of the day, it’s just a rock record. It’s going to be exactly how it’s supposed to be.

Sacred Reich's Awakening comes out August 23rd on Metal Blade Records, and is available for preorder.

The band are heading out on tour with GWAR and Toxic Holocaust later this year, followed by a headlining European trek, so make sure to catch them at one of the following dates: