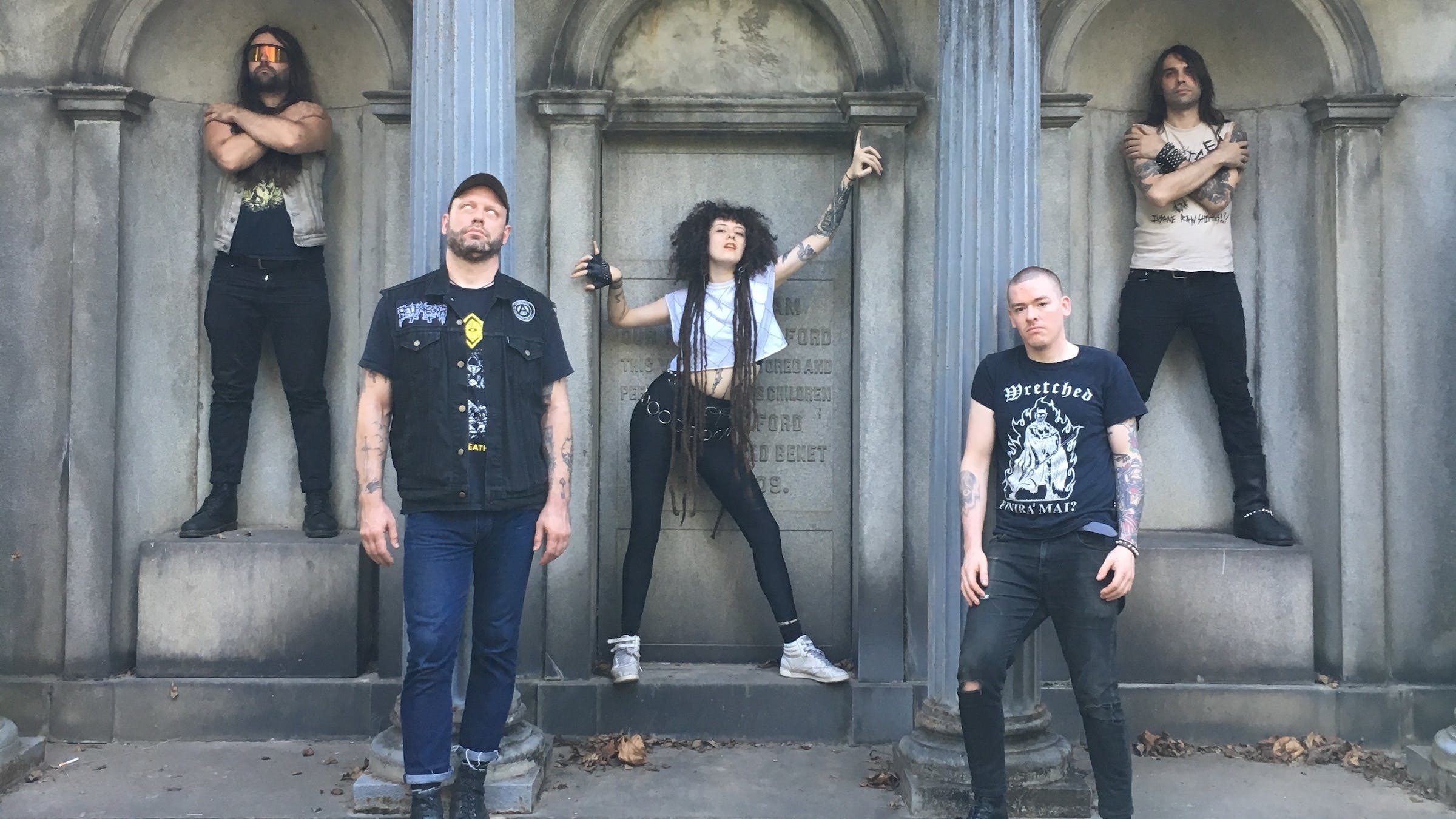 Like most New Yorkers, Jeff Filmer and Tanya Finder are busy people. As the sound man at Brooklyn’s Saint Vitus Bar, arguably the most important metal venue in the city, Jeff is responsible for making everyone from Pig Destroyer to blink-182 sound decent onstage (when he's not working sound at our Brooklyn K! Pit events). Tanya, meanwhile, is a tattoo artist and illustrator, who tours conventions and art fairs selling original prints when she’s not inking bizarre fantasy art into someone else’s skin. But even with everything they have going on, both Jeff and Tanya are excited to sit down and discuss their combined artistic endeavor: their heavy metal band, Shadowland.

“I can’t not do what I do,” says Jeff. “I would lose my mind if I had a day off. I love it. I love being at shows, so of course that’s what I do for a living. Mixing and doing sound is the next best thing to playing in a band. And also, I get exposed to a lot of music I wouldn’t otherwise. That’s the best thing about it.”

That constant influx of music -- both metal and otherwise-- is vital to Shadowland’s unique sound. While in many ways traditional heavy metal in the style of Raven or Anvil, the New York City five-piece throw plenty of curveballs at the listener. Tanya’s vocals echo both the gothic wails of Coven or Wooden Stake and the snarl of Di’Anno-era Maiden, while the moments of chugging riffage and thundering drums show off the band’s appreciation for gritty punk and hardcore. That, coupled with Tanya’s Stygian album art, makes Shadowland more than your average vest-metal act.

"I think we’re doing everything really intuitively,” says Tanya, adding with a snicker, “which maybe isn’t the best thing for our popularity. I think if we sat down and said, ‘We’re going to take a little of this, these things are doing well in the market now, we’re going to package it in a more modern way,’ that would push us forward a lot faster. If anything, I think we push too much stuff in there. I used to be in a goth band, we all used to listen to punk...it’s not a discussion about what we’re going to do. We just do it.”

With everything you guys include in Shadowland’s music, is there anything you specifically try to avoid?

Jeff Filmer, guitars: Certain cliches. Not just having every song be about Satan and metal -- not that those aren’t two of my favorite things! But I’ve never really wanted to be one of those retro bands. This is all who we are and what we listen to. It’s less about sounding like an old-school metal band and more about sounding like a metal band.

You both wear many hats in your lives -- what’s the creative breakdown of writing for Shadowland?

JF I basically sit in my room and write songs with fake drums and overdubbed guitar tracks. [The rest of the band] will then be like, ‘This one kin of works, but these other three riff salad shreddathons are for something else.’ The last two we wrote, I tried to tone down a little bit -- I’m also very influenced by hair metal, and that stuff’s all about chorus chorus chorus. The only thing that matters is putting good music out into the world -- everything else that comes with it is just cool. That’s my role in the band -- songwriter...and lead douchebag.

TF: Jeff and I were the latest additions -- [the other members’ previous band] had lost some members, and decided they weren’t that band anymore, but we kept playing together. I had seen Chain, the previous band, and I told them that I thought their riffs were really cool and suggested that if they looking for a singer I’d be down...And for the art, I kind of just strongarmed it. JF: Everyone’s just doing what they’re good at, and Tanya does the art because she’s good at it. You’re the smart one, I just churn out riffs.

Jeff, as the sound guy at Saint Vitus, do you find yourself seeing bands at work and thinking, ‘That’s cool, Shadowland should try that out’?

JF: All the time. There’s so many bands that I draw inspiration from in a more aesthetic manner -- like, this person did something that looks really cool onstage, or this person has their gear set up in a way that works or sounds really good. Even merch -- what are you selling, how are you selling it? It’s almost always something aesthetic if not musical.

Tanya Finder, vocals: One time you showed me this band, being like, ‘Their singer’s standing on an actual pedestal…’ and I was like, ‘Yeah we’re not doing that.

JF: She had a milk crate in front of her monitor! It was sick! But we’re a little more subdued. We’re a classy ‘80s metal band!

TF: I’m having a cape made currently!

Tanya, your art definitely lends a darker, more nuanced aesthetic to Shadowland than your average reptile-Satan-fighting-skeletons art. Do you mean to pull the band’s whole look in that direction?

TF: I do! I’m dragging these guys along, and they’re pretty down with it so far. I’m much more focused on the subtle, cosmic side of horror. When I’m writing the lyrics and doing the art, I’m just trying to tell stories. My whole concept for most of the stuff in Shadowland is taking us on a journey. ‘You’re walking alone, you don’t know how you got there, you hear distant oceans…’

JF: We all like skeletons and swords, but it’s been done to death. Anything we can do that’s scary but can be different is cool for me.

TF: For me, my favorite bands have a whole world surrounding them, so I’m into world-building. And I’m really into not being bored -- not to shame modern bands, but there’s very little money and glory to be had playing underground music, so the only reason to do it is you want to do it and be creative. At this point, I just don’t want to go to a show and be bored. Just something genuine.

Do you find there’s something unique about playing traditional heavy metal in a city that’s very trendy and modern? Does something about New York inform Shadowland’s music?

TF: I think for me, playing heavy metal in New York, what I’ve noticed is that...I’m from Portland, and here, it’s a little challenging, because things ar e a lot more stratified and separate. We’re definitely a heavy metal band, and we’re a little corny -- a little over the top, a little theatrical. We’re not holding back, and we’re not into looking cool. We’re just having as much fun as possible. I do feel like despite being a metal band, we’re all punks and down to play all kinds of shows. In other cities, where people don’t have the luxury of so many scenes to be in, people are a little more integrated.

JF: Our recent tour was us, a death metal band, and two different punk bands. It’s like being exposed to different things via my job -- it helps.

Jeff, between working gigs at Vitus and playing in Shadowland, we gotta wonder -- do you ever sleep?

JF: I actually sleep a lot! Because my schedule works in a way, where I’m at Vitus three nights a week, I run a rental company -- and with that I kind of come and go as I please, it’s a commission gig -- but I’m always working. Right now, my phone is going off with e-mails. And that’s cool, I wouldn’t have it any other way. This weekend, I worked four days and five shows straight. The night before last, I worked for some heavy hardcore bands, people were beating the crap out of each other -- it was awesome.

Shadowland's new EP, The Watcher, is out now and available for download.