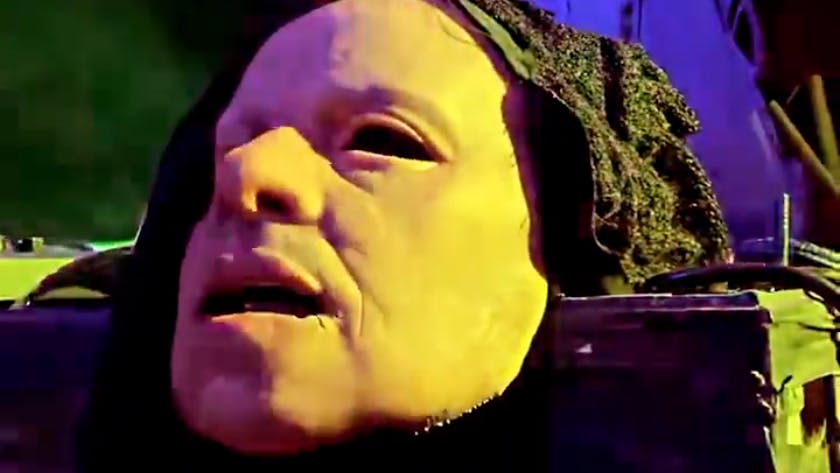 Last week, in a Kerrang! world-exclusive, Slipknot unveiled their new masks for the new era, and it's safe to say that DJ Sid Wilson has truly outdone himself this time. In the past we've seen him in a wide array of gas masks and skulls, but for upcoming album The End, So Far, he has gone full cyborg – complete with robotic hands and sci-fi-esque gilded facegear.

But rather than throwing his previous fleshy veil in the bin, Sid has transformed his We Are Not Your Kind era mask into an animatronic puppet of sorts that appears to 'sing' along onstage. Yes, you read that right, and it's the stuff of nightmares.

Check out the footage of it creepily mouthing along to The Chapeltown Rag below.

Speaking to Kerrang! about Sid's new robotic outfit, Slipknot frontman Corey Taylor said, “His whole thing… I’m just like, ‘What the fuck is happening?’ It’s incredible. He didn’t show us until [we made] the videos.

“I don’t want to give too much away, but you’ve gotta ask him about the journey it took to get that fucking mask together, because he’ll talk to you about it for a good 20 minutes... It’s a fucking horror story! Anybody who’s been waiting on new shit to show up on a deadline will understand the panic that Sid Wilson was going through. I listen to it and cackle, because it’s one of those moments where you know what adrenaline tastes like (laughs).”

Slipknot will release their seventh album The End, So Far on September 30 via Roadrunner.