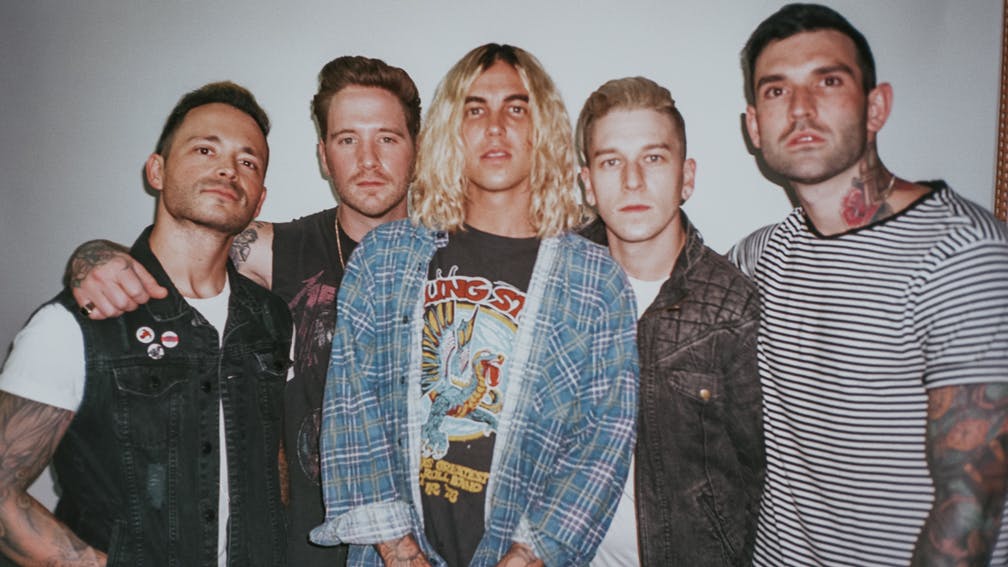 With the release of comeback single Leave It All Behind, it’s a new era for Sleeping With Sirens: one that sees the band move away from the pop-heavy sound of their previous album, 2017’s Gossip. In addition to the new tune, the Michigan-based quintet have announced the release of their sixth full-length, How It Feels To Be Lost, which will drop in September via Sumerian Records.

The past two years have been particularly tough on vocalist Kellin Quinn who, in the midst of Gossip’s hectic touring schedule, was struggling to hold it together. Wracked by depression and anxiety, it would have been easy for the 33-year-old to throw in the towel. But thanks to the renewed vigour that came with working on some of Sleeping With Sirens’ heaviest material ever, Kellin has emerged from the darkness with a new sense of purpose. As he reveals to Kerrang!, How It Feels To Be Lost is the sound of the band embracing their love of rock’s heavier side. It’s an album with a powerful message, and, according to Kellin, this is the Sleeping With Sirens record you’ve always wanted to hear…

Hey, Kellin! Why did you decide to make Leave It All Behind the first single from the album?
“The message of the song is very poignant. We all struggle with thoughts in our mind sometimes, asking questions like, ‘What is my purpose?’ and ‘What is the point of everything?’ When life gets hard, these thoughts can run around your head, so I wanted to play with the idea of that and push these feelings to the edge. Leave It All Behind talks about weighing up your life and deciding whether it’s worth sticking around or giving up. It’s a very dark mindset, but it’s honest, and I think we have to be honest with ourselves when it comes to subjects like depression and anxiety. We all go through that stuff, in some way. Life is becoming increasingly difficult for young people – it can feel hard to find your purpose – but this is a song of hope. The lyrics say, ‘If you feel like you are nothing / If you feel like letting go / I’ll be your hope if you are hopeless / We are not alone.’ That’s an important message to portray, because those dark thoughts can make you feel like you’re by yourself, but they’re feelings that many people experience. I’ve been in that place over the past couple of years, and I wanted to let people know that they’re not alone.”

Is Leave It All Behind representative of the overall sound of How It Feels To Be Lost?
“It’s a really good middle-ground in terms of the record’s sound. This isn’t an album like [2015’s fourth LP] Madness where you’ve got songs like Kick Me and The Strays that are totally different. This record is very cohesive, which is something we were really going for. Leave It All Behind has that heavy vibe that the album as a whole possesses, but it’s got plenty of melody, too. It’s a great taste of what’s to come.”

What was the vision you had in mind when putting together the video for the song?
“I wrote the treatment for the video on a flight to LA while we were finalising what the singles for the record would be. I’ve always been interested in special effects, and you see loads of music videos which are just your standard ‘band in a room’ thing. It’s a concept that’s been done to death, so I wanted to focus on a real character, and use that to analyse how I see myself and my struggles. The video covers my recent experience with depression and anxiety and coming to the end of that period. There are a lot of interesting elements to the video, not least me falling out of a window! I think it’s awesome.”

You debuted Leave It All Behind at All Points East in London recently. What did you make of the crowd’s reaction to it?
“I was so nervous to play it, and we had a technical issue during the intro, which didn’t help! As we were playing, I looked out and saw people smiling and being like, ‘Holy shit!’ I was really pleased with that, and I feel like fans are ready for this from our band – it’s time for the heavier, darker side of Sleeping With Sirens. We listened to what the fans wanted, and that’s what we’re giving them. We’ve done being heavy in a smart way on How It Feels To Be Lost, and I felt it was important that we didn’t totally go back to our roots with it. Our early sound is in there, sure, but this is a new Sirens – it’s not like this is a throwback to [2010 debut album] With Ears To See And Eyes To Hear. The main thing to know is that, yes, this album is heavy, which is what people were asking for.”

Aside from the heavier sound, what else is different about How It Feels To Be Lost compared to Gossip?
“Both the music and the lyrics are really different, but just because we’ve made a very different record to last time doesn’t mean we see Gossip as a failure. That last album was one that came during a period when we hadn’t had any time to stop and focus on ourselves, and I think that was the biggest issue with it. We were thrown into a major- label experience with a lot of people telling us what to do, and I spent a lot of time writing songs with other people instead of sticking to my tribe and trusting our instincts. We felt like we had to deliver something that didn’t truly feel like us, and given the emotional turmoil my life was in at that point, it wasn’t the right record to make. We fought through it, though, and that opened my mind to what this record would ultimately be. I don’t feel like I have to go out on a limb to justify or force what we’re doing with How It Feels To Be Lost – this all came very naturally. I’ve written about everything in a very transparent way on this album, to the extent that people who’ve heard it have said, ‘Damn, dude, I love the record, but it makes me wanna give you a hug.’ I want How It Feels To Be Lost to provide that comfort for everyone who can’t express their feelings. That was really important to me, and I think it comes across on the album.”

Given the personal struggles you experienced, would you say that this album has a dark tone, lyrically?
“This is definitely a dark record – it’s a very introspective look at the life I’ve lived. People often say to me, ‘You’re in a successful band, you tour and you make a living, why are you depressed?’ This album is me making the statement that it doesn’t matter what life you lead: if you don’t address your internal issues, they’re going to take over. I’ve put my fears out there for people to listen to in the hope it may help them.”

What does the record’s title represent?
“How It Feels To Be Lost symbolises being trapped somewhere and struggling to see the light, and for me, that’s how mental illness feels – it’s like you’re lost, isolated and nobody understands you. It just felt like the right name for the album, and the title-track is one of my favourites, too.”

How does the album artwork echo the themes of the music?
“The candle burning away represents anxiety and depression. When you suffer in that way, you can be constantly worried about both the past and the future, and you don’t notice the present that you’re living in. A candle having burned out is a very abstract and dark image in that regard, because when it burns away, you toss it out, and that’s kind of what life is like; you start out brand new, melt away over time and when you’re done, that’s it. But instead of watching that time tick by, we need to enjoy our lives and live in the present. That’s what the album art means to me.”

You worked with producers Zakk Cervini, and Matt Good of From First To Last, on the LP. What did they bring to the table?
“They were a dream to work with, and it was a whole different experience for us. It wasn’t like us going to a bunch of producers and them having their own idea of what they wanted the album to sound like – Zakk just wanted to work with us because he loves our band, and he was keen to hear about the vision we had. Me and Jack [Fowler, guitar] sat down with him and told him we wanted the music to be heavy and to mirror the lyrical themes I had in mind, and we went from there. Zakk and Matt basically joined the band to record How It Feels To Be Lost. It was a really fun process, because when you properly let a producer into your world and allow them work alongside you, it makes everything so much more enjoyable, especially compared to our past experiences where we’ve worked with producers who just want to make their own album. Matt was amazing to work alongside, given how much we love his band From First To Last. The first song we worked on with him is one called Blood Lines – we actually met up at the Madden brothers’ studio whilst Matt was working on the new Hollywood Undead record – and when he asked us what we wanted the track to sound like, we said, ‘Take us back to the time you made [2006 From First To Last album] Heroine.’ I was blown away with what he came up with, so we got him on board for a few more songs after that.”

Finally, is there a particular message you’d like fans to take away from How It Feels To Be Lost when they hear it?
“There’s no right or wrong way to interpret it. I definitely have my own reasons for why the songs exist, but I’m aware that they can be read in different ways, so I’m interested to see how the lyrics resonate with people. This album, more than any other we’ve previously released, is open to interpretation because we want people to know that the thoughts they’re having aren’t wrong. It doesn’t matter what the listener extracts from How It Feels To Be Lost; as long as they’re taking something away, that’s amazing to me.”

Sleeping With Sirens' new album How It Feels To Be Lost is out in September via Sumerian Records.