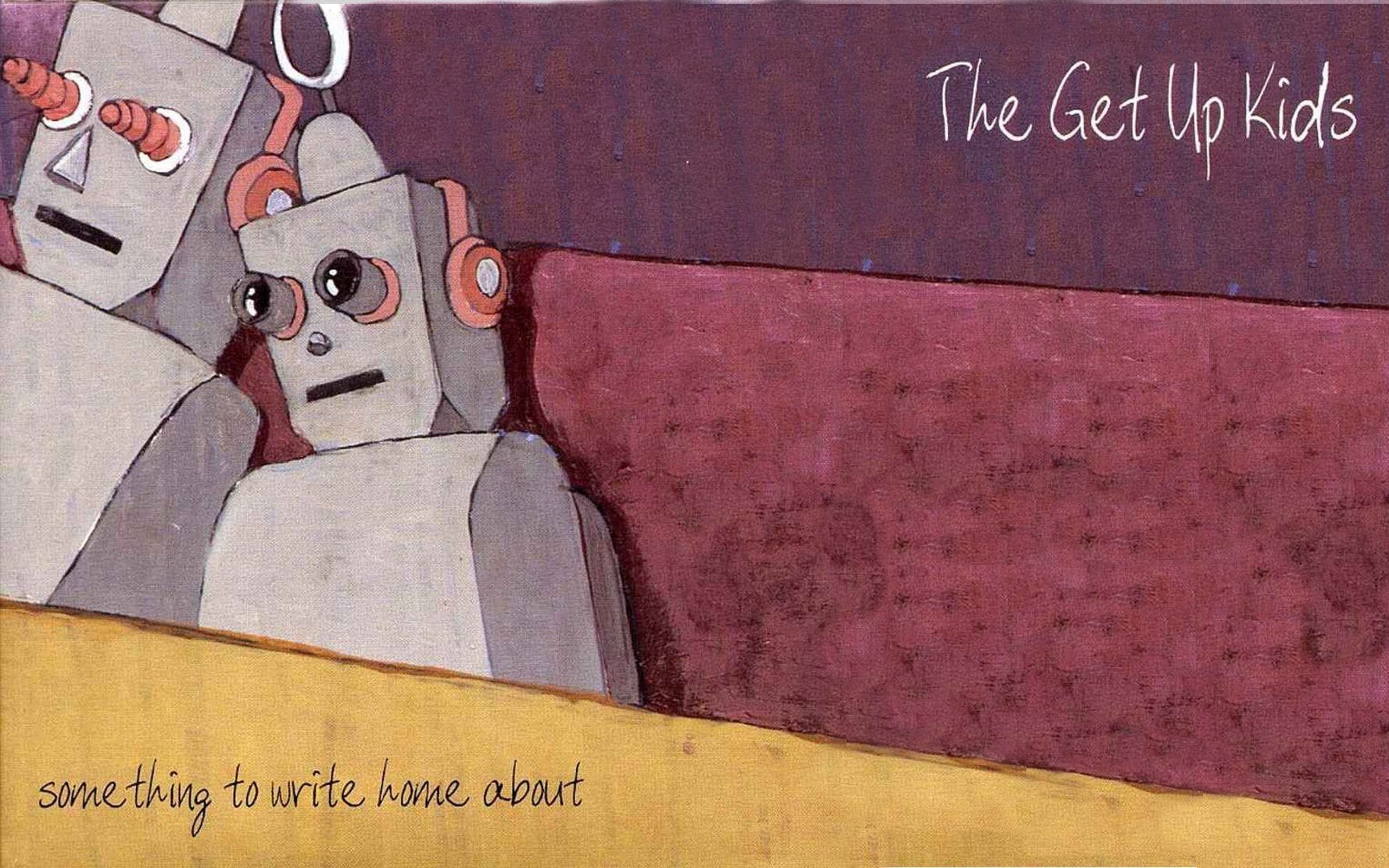 Yep, that's right The Get Up Kids are back with new music. Missed the announcement? Everything you need to know is right here. And yeah, it's fair to say we're stoked. Because their old music is all kinds of excellent. Over to Kerrang! writer Mischa Pearlman, to explain why their breakthrough 1999 album, Something To Write Home About, was exactly that and then some.

The recent news that The Get Up Kids, after some seven years, will be releasing new music imminently, made my heart jump with joy. It doesn’t matter that I haven’t played their last album, 2011’s There Are Rules, in years. I couldn’t even tell you how any of its songs go. It’s not that it was a bad record, but it was an album that tried too hard to not be a Get Up Kids record, to escape the trappings of that ever contentious, nebulous term ‘emo’ – the genre for which they became accidental, temporary standard-bearers before it was once again mutated and modernised by the likes of My Chemical Romance and Fall Out Boy.

I got into the band in the most clichéd and appropriate way a guy could possibly get into The Get Up Kids – through a mixtape, back when people still made mixtapes. I’d become friends with a girl in the States and she sent me a cassette with a whole bunch of awesome punk bands on Side A, including Alkaline Trio, The Impossibles, The Promise Ring, Braid and Green Day’s At The Library, along with a load of others I’ve long since forgotten. Side B, however, contained Four Minute Mile, The Get Up Kids’ debut album, which I guess had just come out a few months before in April 1997. I was an instant fan: to this day, Shorty remains one of my favourite ever songs, and I still know every lyric to every track on that album, and hearing them still gives me goosebumps.

So I was more than ready, when, a couple of years later, the band released Something To Write Home About. For the record, I love the band’s first three records almost equally, but it was this second full-length that soon came to be the album that defined – and still defines – them. It was more polished and had better production than Four Minute Mile, but was full of the same heart-wrenching angst and messy guitars and its songs were doused in wallowing and regret. After all, break-up songs don’t really get much better than Holiday – the album opener on which Matt Pryor, lamenting the departure of a significant other scream-sings in the chorus: 'Say goodnight, means goodbye / I know you think my life would stop when you're away / Maybe I can see you on the holidays'. Any vague sense of hope that last line contains is immediately obliterated by the chorus’s second half: 'You're worlds away / I've never forgotten all our yesterdays / But I'm lucky if we're speaking on the holidays'.

The soaring, if-I-don’t-get-this-off-my-chest-I’ll-die passion and urgency of that song – both lyrically and musically – is also found in Action & Action, Red Letter Day, Ten Minutes, Close To Home and I’m A Loner, Dottie, A Rebel, all songs that relate the trusting innocence of childhood friendships and young love, and the soul-crushing, belly-aching, all-consuming lacuna that opens up inside when you realise that none of those things ever last. Even if it’s you – as on I’m A Loner…, a song about a one-night stand that means more to the other person than it ever did to you – who’s breaking hearts. I’ve lost my voice enough times over the years, from when they first toured that record to the 10 year anniversary tour of it and beyond, that they’re part of me now – attached to memories I barely remember, love I never knew, or love I thought would last forever, even if I knew better.

The crazy thing is that Something To Write Home About isn’t an album you ever grow out of. Maybe, on paper, you should, but its songs are so good, so visceral, so full of the stuff of youth and love and growing up and the insecurities and wonder of being alive that you just don’t. Because if you do, then you risk losing a fundamental part of yourself, your life, your past.

That fire is just as evident watching them whenever they play live, the crowd – most of whom, like me, grew up with the band – arm in arm, singing along as if nothing else matters except that moment. And it’s not just the faster songs, either. There are plenty of slower, more contemplative songs on Something To Write Home About, too. Valentine, Out Of Reach, Long Goodnight are all poignant odes to sorrows that you’re never quite able to forget – the hollows carved out by absence and distance and opportunities and moments lost in time.

'I'm not bitter anyway', sings Pryor on Long Goodnight, his voice almost breaking from the defiance of the lie, but also from meaning it too much, 'but I didn’t want it to turn out this way'. Whatever it is he’s singing about – and his lyrics are often vague enough to apply to a multitude of situations, even if they’re also hyper-specific – once you know that feeling, you’ll never not know that feeling. That’s why this album remains as powerful and potent nearly two decades on.

It finishes with the lamenting lilt of I’ll Catch You, a song which starts with a gentle piano and explodes into one of the most tender and overwhelming expressions of pure love ever captured on record. That its lyric contain a reference to Jawbeaker’s Jinx Removing was, for me, the icing on the cake.

It places that song, which itself is firmly rooted in the past, in the past with deft simplicity. 'Remembering Jinx Removing', Pryor’s voice aches, stretching out the syllables of those words for what feels like forever until the song’s crescendo breaks and you’re left in quiet solitude once again, the gentle piano notes that close the song slowly fading, just like everything else, into nothing.

And yes, that’s over-emotional hyperbole, but that’s the point. That’s the power and the magic of that song, this album, this band. I sincerely hope the new stuff has the same effect, but even if it doesn’t, this record will continue to stand the test of time.

The Get Up Kids

The Get Up Kids Have Made Their Peace With Being Emo

With the release of their new album, The Get Up Kids have grown up enough to not give a shit about what some call 'emo.'

Don't Call It A Comeback: The Get Up Kids On New Music, Creativity And Evolution