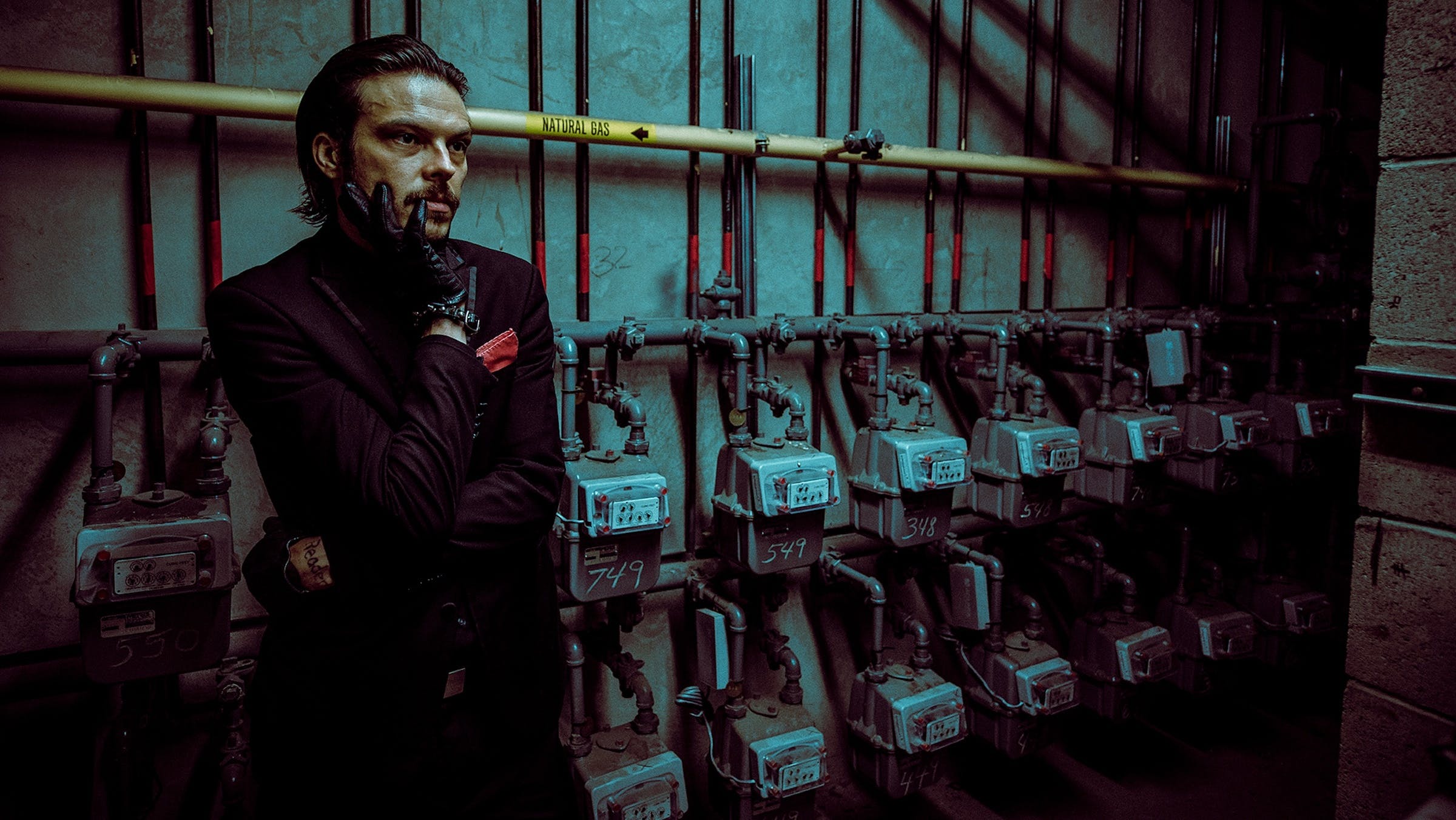 There's an element of danger to Spirit In The Room that makes the audience wary of getting too close. The music compels them to step forward, while common sense, perhaps self-preservation, suggests that they move back in case this madness is contagious. It takes a special kind of band to achieve this, but Spirit In The Room are a special kind of band.

“I'm a pretty goofy guy and I like to make people laugh,” he says, “but there is a bit of a burden that I carry around with me since childhood. When you're younger, you don't really deal with anything; you get laid and you get drunk, break windows and steal shit, but then you get older and it's like 'oh shit, man, I've got to deal with this.' I've always been obsessed with music and it definitely gets an evil out of the way. It's way cheaper than going to see some asshole who's just gonna put you on medication. I'll just do some exercise and keep screaming my head off into a microphone, that way I don't kill myself or anybody else.”

Originally formed in 2010 in Oakland, California, as a studio project, and now based in Los Angeles, Spirit In The Room have been described as 'a challenge to categorize', their music taking in everything from Black Sabbath, Refused, and Nine Inch Nails to The Birthday Party, Jesus Lizard, and Joy Division. They even throw a cover of Discharge's Maimed And Slaughtered into their work, the hardest of hardcore punk rock. Clearly this is not a band who panders to people's expectations of them.

“Fuck no!” Sanders laughs. “Plus, I don't know what people expect. I don't know how to label it and I've given up on people's expectations. We play that Discharge cover every set and we have a song called Vicious Eyes that's very mellow, then we'll go into Q Lazarus' Goodbye Horses. The whole point of Spirit In The Room was not to have to be in five bands because I love more than one style. From a business standpoint, it might not be the best idea, crossing genres and throwing people for a loop, but that's what I like. I'm a huge Birthday Party fan, and the Jesus Lizard, the Fall... I love all sorts of shit.”

The band, Dennis points out, is a labour of love, and the line up changes regularly. Before relocating, Spirit would drive from Oakland to LA to play shows to a handful of people, barely covering expenses but slowly building a cult-like following and gaining richly deserved recognition. It currently features Darren Howard on live bass, and Kyle Nadeau on live guitar, but Dennis writes and records all the music. He writes all the lyrics, too.

“There's certain things we don't wanna say about ourselves because we don't want to give people anything about us or we don't want to offend anyone,” explains Dennis, “but when it comes to lyrics it's free game and nobody's safe. It's all very personal. Half of the stuff I write about has to do with my struggles with psychiatric medicine and how much I believe it's another form of eugenics that's killing us all. There's no money to be made out of telling someone to go for a jog or drink more water. Instead, we reach for the pills, and it makes me fucking angry because I've been a guinea pig all my life. A year and a half ago I went off my meds and decided to change everything. There's good days and bad days, but I'm way better off without all that shit in my system. I can't even remember the name of the medication I was on, but I had to relearn how to walk and there's no way that's helping people.”

That said, Dennis concedes that to be a truly great artist is to be a little crazy, for want of a better word. Perhaps too sensitive.

“Absolutely,” he says. “I'm very sensitive to energy. I can walk into a room and be in the greatest mood, but if there's someone sitting in the corner brooding I can't ignore that. I'll either shun that person because their energy's fucking me up or I'll be putting my arm around a stranger, crying with them. I hate to sound like a hippie, but you've got to take care of each other. It's a dark, dark world, but don't look for the light at the end of the tunnel, be the light!”

Above image by Nicole Carlson.

All of which should explain why he is such a compelling frontman, a menacing presence, mesmerizing and unhinged. He cites GG Allin's: “My mind is a machine gun, my body is the bullets, the audience is the target.” But Sanders is more cerebral, not to mention better dressed. 'If Nick Cave, Lemmy, Elvis, Harry Dean Stanton and Iggy, had a child in a church gone mad... That is Dennis,' said one particularly accurate review.

“To me, if you put the Frank Booth character from Blue Velvet on stage, that's an amazing frontman,” says Dennis. “Shit like that inspires me, a presence that just the sight of him makes you uncomfortable. I always find that the best frontmen aren't afraid to look like fools. Don't be afraid to look like an idiot, and if you miss, then miss big. I've done shows in front of friends and they were the worst shows I've ever done because I love my friends. Who wants to scream 'fuck you' at a bunch of people you love? I don't really love strangers in the crowd, and, if anything, I'm yelling at them. Even though those people are special to me and we all have something in common, I don't fucking know you and I'm telling you how I feel; I'm showing you how I feel. It's definitely a 'me against them' kinda thing. I can't act like that outside of music, music makes it possible. And it's also a reaction to the music. It's like, I don't know you, you don't know me, we're alone in the dark and I'm feeling around for scissors.”

Dennis R. SandersSpirit In The Room