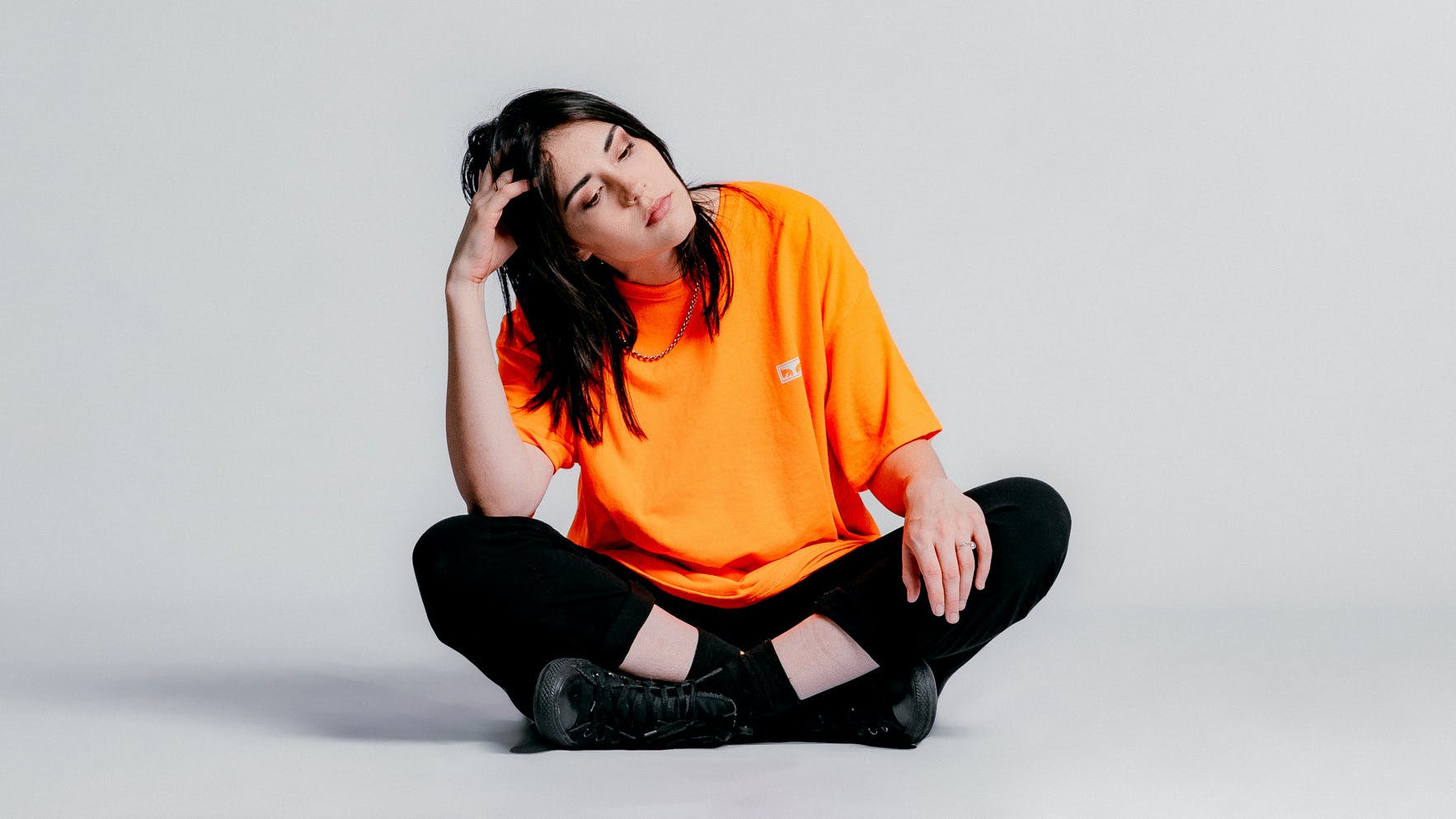 Bonnie Fraser and Kerrang! have just missed each other. Bonnie is calling from the other side of the world during a global pandemic, though until recently she had been hiding out during lockdown in Manchester with her long-term girlfriend, Hannah Mee from the British pop-rock band Hot Milk. That was, until her visa expired. “It’s just so hard when you don’t have an end point,” she explains of her current situation. “Now I’m in Sydney but the borders are closed both ways, so I have no idea when I can leave… but I’m just trying to hang with the guys and get stuff done.”

The long-term plan is set: Bonnie’s currently applying for British citizenship to stay in the UK permanently. “Luckily my dad is British, but we just don’t know how long that’s going to take either,” she sighs. “It’s all just shit.” Bonnie isn’t the sort of person who leans into negativity for long, and laughs when she says to no-one, “But what can you do?”

The truth is, absolutely nothing, as Bonnie is all too aware while promoting her band’s latest album. Like other artists on the cusp of their major breakthrough moment – Stand Atlantic were tipped as one of Kerrang!’s Hottest Bands as far back as the beginning of 2018 – they’re leaping off a strange precipice. Their second album, one that follows the exultant pop-punk of debut Skinny Dipping, is something very different – a step into a bigger, broader and less easily defined alternative sound. Pink Elephant, rather than be enjoyed live, will be pored over alone in bedrooms and on socially-distanced summer walks (Bonnie is currently praying, like anyone who released an album this year, that touring the record will be a possibility in 2021).

Their moment hasn’t gone unnoticed by fans and could-be fans. Hours before we speak, Bonnie posted a photo on her Instagram stories of a man’s enormous leg tattoo of her face (“I didn’t know what to do with it, because it had to be shown. It’s incredibly insane”). But even in the very early days of Stand Atlantic, a girl approached her with a massive band tattoo. “I was like, ‘Wow, we’ve only got four really bad songs out right now, and someone’s already gotten a tattoo… Forget any other type of motivation, we’ve got to do this now.’”

‘This’ began at five when Bonnie started learning the guitar. Her dad was a musician and had guitars around the house. “Mostly he’d just tell me, ‘Don’t be in a band, you’ll do drugs and you’ll die,’” she remembers. Bonnie claims to have been “the shyest person on the planet”, which today seems unbelievable. She pushed herself to sing when she was about 16 by uploading songs to YouTube. Her confidence was boosted when teen musicians started getting in touch off the back of the videos to collaborate. One of those people was a kid who asked her to perform Fountains Of Wayne’s Stacey’s Mom with him in his school’s talent show. “I hope that video never comes out,” Bonnie laughs. “I literally come into the song so off-key, I was so nervous. And I was wearing bright pink pants.”

For anyone who grew up in the ’00s, it was a case of coming of age in an unbelievably different musical (and social) landscape – particularly if you were a queer woman. To produce the confidence to even be in a band, let alone front one, would have been seen as somewhat subversive. “Being a tomboy I definitely leaned towards Avril Lavigne and P!nk,” says Bonnie today. “My mum listened to a lot of Janis Joplin and a lot of things that from a small child’s perspective were very ‘out of the box’. They were not the typical ‘girly’ girls. I never liked the Spice Girls. Fuck the Spice Girls! Starting out as a tomboy and – well I still am, I’m not a typical girly girl in any sense of the word – it was really important to find other women to relate to.”

Although her musical taste quickly included bands like Simple Plan, Good Charlotte, Avenged Sevenfold and Slipknot, to name a few, those “alternative”-looking female pop stars were a needed gateway into becoming who Bonnie is today. “I do feel that if I didn’t have any of those women role models, I would still be doing what I’m doing,” she continues. “But it definitely wouldn’t have seemed like it was as plausible. When you see yourself in somebody else, you think, ‘Wow, great, I can do that.’”

The further she gets into her music career, the savvier Bonnie is getting. She today finds it funny that she totally believed in these idols’ authenticity. “As a kid when you're seeing these people, you don't realise that they are pop stars, really. You’re presented with the marketing and you take it at face value and you see interviews with Avril Lavigne and you think, ‘Wow, she's such a rockin’ skater chick.’ I always wanted to be that – [just] not the fake version.”

The unpackaged, un-pop route for Stand Atlantic meant that, besides a three-week spell working on their debut album, they have been constantly touring for years. “Unless you're a Spotify band, that's the only way to do it,” Bonnie says. “You have to be present and be a part of that culture because that's what it's all about.” They also knew they had to leave their “geographically challenged” continent to reach the rest of the world, and they did so by aligning themselves with the biggest names in pop-punk: in the recent past they’ve supported New Found Glory, State Champs and Neck Deep.

Thankfully it was before this hectic touring life that she understood her own sexuality. “I'm all about that emotional connection. I wouldn't rule out a trans person or I wouldn't rule out a non-binary person. We're just in layers of skin – it's fine.” Although she isn’t that attached to labels, she identifies as bisexual.

“The real internal work that I did on figuring that out luckily was not on tour,” she explains. “If all the craziness had started and I hadn't worked that out I would have just pushed it to the side because I had so many other things going on, I would have just seen it as a distraction.” In similar ways to gender, queerness was often presented stereotypically in ’00s pop culture, when Bonnie was a teenager. “Growing up there were people out, but I hated it so much in myself that I just didn't pay much attention to it. Now there’s such diverse representation that you can see yourself in so many other people. I think it's a lot easier for people to work that out for themselves, and if I can be that for even just one person, that’s super cool to me.”

The queer proportion of Stand Atlantic’s fanbase are gravitating towards Bonnie, often before even knowing about her sexuality (“It’s gaydar on another level,” she laughs). “I'm just grateful that I can post a photo of my girlfriend and I and not get hate for it. Obviously I don't want to make my social media a haven for my relationship or anything, but every now and again I do like to show something about it just to show people that it's okay.”

But: serious moment over. The importance of fun and silliness wherever possible is something important to Stand Atlantic – whether it’s Bonnie tweeting about the need to change a tampon not stopping her from rocking out onstage, or posting outtakes from selfie shoots on her Instagram with jokes – and that’s before we’ve even discussed the music.

There were only two rules when working on their second album: each song needed a hook and had to actually “say something”. Otherwise it was an off-the-wall experiment in proving what they were capable of writing. The resulting breadth of Pink Elephant is impressive: although pop-punk provides the bricks and mortar, the album is decorated with a piano ballad, old school rock, metalcore, electronica and pop. One standout track is their latest single Blurry, an ambitious track with a huge ’80s power-pop feel, not dissimilar to some of Hayley Williams’ solo material. “I’m so scared to release that song. Oh my god, it’s not pop-punk!” she says. “It’s about a toxic relationship where you need them but they fuck you up. I sort of made it up – although obviously I took influences from my life. I always do; I don’t think you can write a song without something to go off.”

Bonnie’s dearest wish is that, not only can she play it live next year, but that fans old and new embrace the genre-bending potential that Stand Atlantic have started to actualise. “People get an attachment to the style you had when they first discovered you so I get the protectiveness of that feeling,” she says. “But at the same time, if you didn’t change or do something different, people are gonna have a go at you for that anyway.”

On that topic, Bonnie has one final serious point she’d gladly share with her fans. “People need to stop being so ashamed of change – it’s the best thing,” she says. “It really is the only way you grow.”