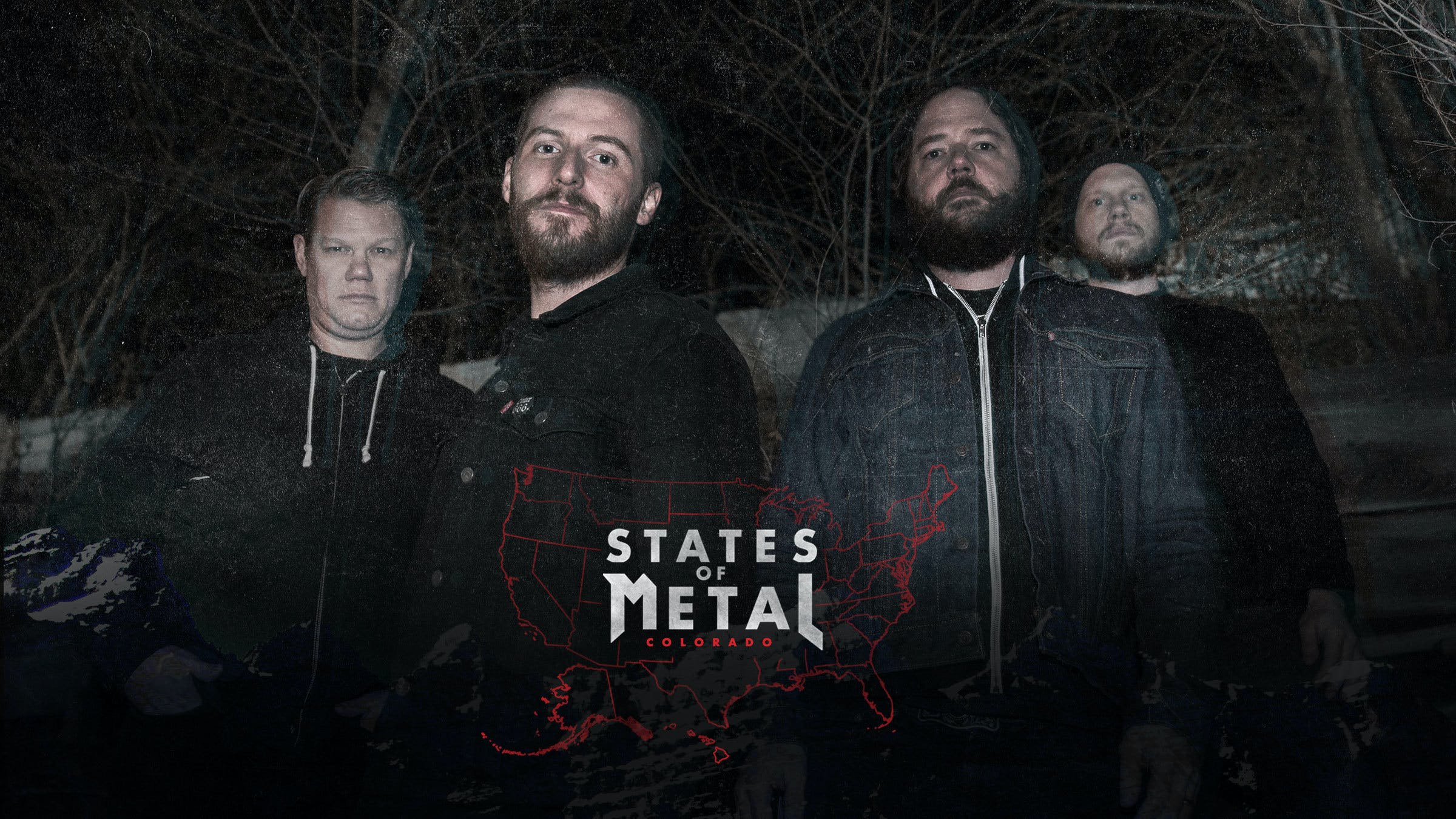 And while you're reading, listen along to our States Of Metal playlist, featuring killer tracks from each state we feature. Scroll through to listen to music from Colorado and all of the states we’ve profiled in the past:

There’s a natural freedom to Colorado. It feels hokey in a John Denver sort of way, but it’s undeniably true. The huge and varied natural wilderness throughout the state -- most notably the ancient wall of the Rockies in the west-- gives it a sense of vast possibility. It also leaves a whiff of the outlaw frontier on it; though the Centennial State’s music fans are pretty crunchy, they only serves of reminders that the hippie and biker lifestyles weren’t always that different.

Nowhere is this sense of freedom and its creative reward more apparent than in Colorado’s metal scene, specifically that within Denver. A combination of creative liberty and solid work ethic has resulted in an incredible selection of bands that, in the past five years, have made Denver one of the most watched American cities in terms of up-and-coming metal. But as new industries and gentrification creep in, the room and resources to be creative are growing sparse. And unlike residents of many mid-size cities seeing trendy developments take over their home, most Denver residents were pretty happy with the way things were before.

"Colorado’s always been an oasis in the middle of a bunch of fucking bullshit,” says Ethan McCarthy. Onstage as the frontman of unsettling sludge outfit Primitive Man, Ethan is intimidating to say the least. But ask any member of the local scene and they’ll describe a kind-hearted guy who loves the shit out of his city and books most of the important shows in town. “That’s the thing about this place, is that we’re surrounded by trashy fucking states. But we’ve always been the best place in the middle of all of them. We used to have to beg bands to come to play here, but then they’d come here, see it doesn’t suck, and make it a stop on their tours.”

Ethan’s sense of isolation is a common one. For musicians growing up in this scene, Denver will always be a city way out in the middle of the country. On the one hand, this meant that historically, getting dates on big tours was hard. On the other, it created a close-knit community of supportive metalheads and musicians unlike any other.

“Colorado’s metal scene is just a little less divided than other places’ scenes,” says Ethan. “And that’s always been the case. No matter what, there’s a desire to sound like your own thing. I’ll go to some cities where every band sounds like Wolves In The Throne Room, or Tragedy, or Sleep. Here, people get really excited when you sound like something different, and it’s good.”

Colorado's recent boom in killer metal might seem novel, but its musical legacy is long and storied -- just a little unexpected. The first major metal band from Colorado sounded nothing like the bands blowing up the Denver scene right now, and didn’t even get huge until they left the country.

“People come up to us in Colorado and ask where we’re touring from, and I have to explain that we’re from here,” laughs Mark Briody, rhythm guitarist of power metallers Jag Panzer. Formed in 1981, the band's high-flying musical style and success among the European metal fest crowd might make one think Jag Panzer are German or Dutch. But Mark is from Colorado Springs, and he talks about Denver’s metal history with the pride of a local scene kid. “Back when we formed, if you asked the average person what metal was, they’d say Van Halen. The real shift came when Metallica came through on the Ride The Lightning tour. They played the same club we started at, and it was packed. That was a huge turning point -- a band like Metallica drawing a really huge crowd in my city.”

Denver offered big tours a much-needed stop between American coasts. Sure, a Denver show might mean little more than gas money, but it was worth it to cool your heels. As they began making Denver a must-hit spot, tours began adding new influences to Colorado’s musical ecosystem. DIY venues like Rhinoceropolis and Glob sprouted up, hosting diverse bills where no two bands sounded the same. Cephalic Carnage quickly became Colorado's premiere death metal band, but even their weed-obsessed brand of off-kilter grindcore was its own breed of beast.

“We always just tried to be a little weirder than the average band,” says Steve Goldberg, Cephalic’s rhythm guitarist. “There’s really not a typical Denver sound, and every band sounds different. Every band who’s doing good, there’s no band who sounds like them. And that's not counting the bands who people don’t know about -- Skeleton Of God are probably still my all-time favorite death metal band. They were way ahead of their time.”

Today, Denver's scene has bloomed into a plethora of diverse metal bands making waves in the international scene. Besides Primitive Man’s bleak noise, Denver also boasts the creeping death metal of Blood Incantation, the hard-working thrash of Havok, the withering blackened sludge of Glacial Tomb, the elemental black metal of Wayfarer, the burbling horror-grind of Of Feather And Bone, and most notably the epic downer-doom of Khemmis, whose new album Desolation comes on the heels of the band winning Decibel Magazine's Album Of The Year in 2016.

"Honestly, the biggest change in Denver is that no one was paying attention before," says Ben Hutcherson, guitarist and vocalist for Khemmis. Born in Memphis, Ben knew Denver was for him the minute he moved there. He’s currently writing his sociology dissertation on economic developments affecting a city’s underground art scene, for which the city is the perfect subject. "For many years, big tours avoided Denver like the plague. So because there hasn’t been any of that pressure on bands, they've been able to just figure out what they want to do without feeling as constrained by genre boundaries as they might in a larger city. We don’t have enough death metal bands to make a death metal scene, or enough doom metal bands for there to be a doom scene, just a primary underground that’s filled with a variety of bands."

For Ben, Colorado's melting pot scene has created a good-natured camaraderie where level of success always come second to talent and personal standard. “As long as you’re doing it authentically Denver will support it. Bands push each other to be better without competing. Look at a band like Spectral Voice -- they play with all the fucking lights off! I don’t know how they do that! When you see that, it makes you want to be successful, but not at the detriment of your friend’s band. You want to see them keep being successful, and kicking ass, but you want to do that as well. Having traveled, I know that does NOT exist in other cities.”

These days, the Denver metal scene is slightly more streamlined. There are two metal-themed breweries, Trve Brewing and Black Sky Brewing, and venues like Hi-Dive and Lion's Lair that are known for regularly hosting metal shows. But a recent change in state law has shifted Denver's metal scene away from DIY spaces, whether they like it or not. And interestingly enough, it’s the state's sense of freedom that spawned the initiative that is currently uprooting the underground.

“We used to do these fucking cool warehouse shows,” says Ethan McCarthy. “Crazy, loud, wet shit, constantly. And you can’t find a place to do that shit anymore because everything’s so expensive, and because all the warehouses are full of weed.”

The legalization of recreational marijuana use that started in 2014 became a booming industry that has swallowed much of Denver culture. This has brought in young professionals looking for work, cannabis tourists, and entrepreneurs interested in snapping up all of the warehouse properties that hosted DIY metal shows for the last ten years. This, plus the arrival of tech companies looking for space to grow outside of California and settling in areas like Boulder, has caused a huge hike in rents among Colorado's poorer residents -- including, of course, its metalheads.

“I mean, I think pot should be legal,” says Ben. “But there’s always been weed here. You could’ve come here and smoked weed before. And the industry has messed up economic stuff in the state. It has reinforced an economic divide, because increasingly we’re seeing that a handful of companies and investors are controlling the major dispensaries. Budtenders make minimum wage. And when economic development happens, space becomes a commodity, and after the Ghost Ship Fire, the city started cracking down on DIY spaces. So the spaces where young people enter the scene, where they go to shows and discover the underground, that’s in danger. Where are the kids going to find the music? No knocking on rooms with 2,000 caps, but you’re not going to find that same sense of community there. That’s a concert, not a show.”

And yet, while Colorado’s scene veterans are distressed to see things change, the groundwork they laid has begun to pay dividends. As one band from Denver gets noticed, another finally gets some press, even if they sound different. The result is an attempt to imitate the Colorado tradition -- not to bite off any specific style, but to try and create something that sounds personal and different.

“There’s a return to the natural, organic sound and aesthetic in metal,” says Dave Otero of Denver studio Flatline Audio. Recently featured in Nail The Mix for his work with clients like Cobalt, Cattle Decapitation, and Archspire under his belt, Dave has become one of underground metal's most important producers. He sees Denver’s freedom to be you and me as a growing trend. “For a while, productions were highly modernized, and it sounded like otherworldly beings creating music. But I’m seeing a shift away from that. Bands just want to sound like a band, live and recorded. They’re dropping the pretension, and the ideas of how members are supposed to be, and coming back to being a band. The death metal scene has really gone in that direction. There are bands taking control of their own identities.”

Though every band in Colorado’s metal scene sounds different, there is one thing they all have in common: they love it there. Even as rents get hiked, DIY spaces become galleries and cafes, and weed tourists fill their streets, they refuse to budge -- in part to help the local scene, and in part because they’d rather not leave a place where they get to be who they want to be.

“I’ll never leave Denver as long as I can afford to live here,” laughs Ben Hutcherson. “Denver is a place that regularly gives me hope for people being creative and finding interesting ways to sustain themselves with their creative pursuits. A city that responds to the needs of its population. For all its faults, I fucking love this city. I’m fine to have my ashes spread in the mountains...and I’m not even a mountainy dude!”

“Yeah, dude,” says Ethan McCarthy. “I’ve been all over the world, and I never want to leave here.”

At their Brooklyn show with Cloak, Denver’s Khemmis remind fans why they came to metal in the first place.

Leather's not just for looking cool, folks. Here's a round-up of musical acts who live the outlaw life.