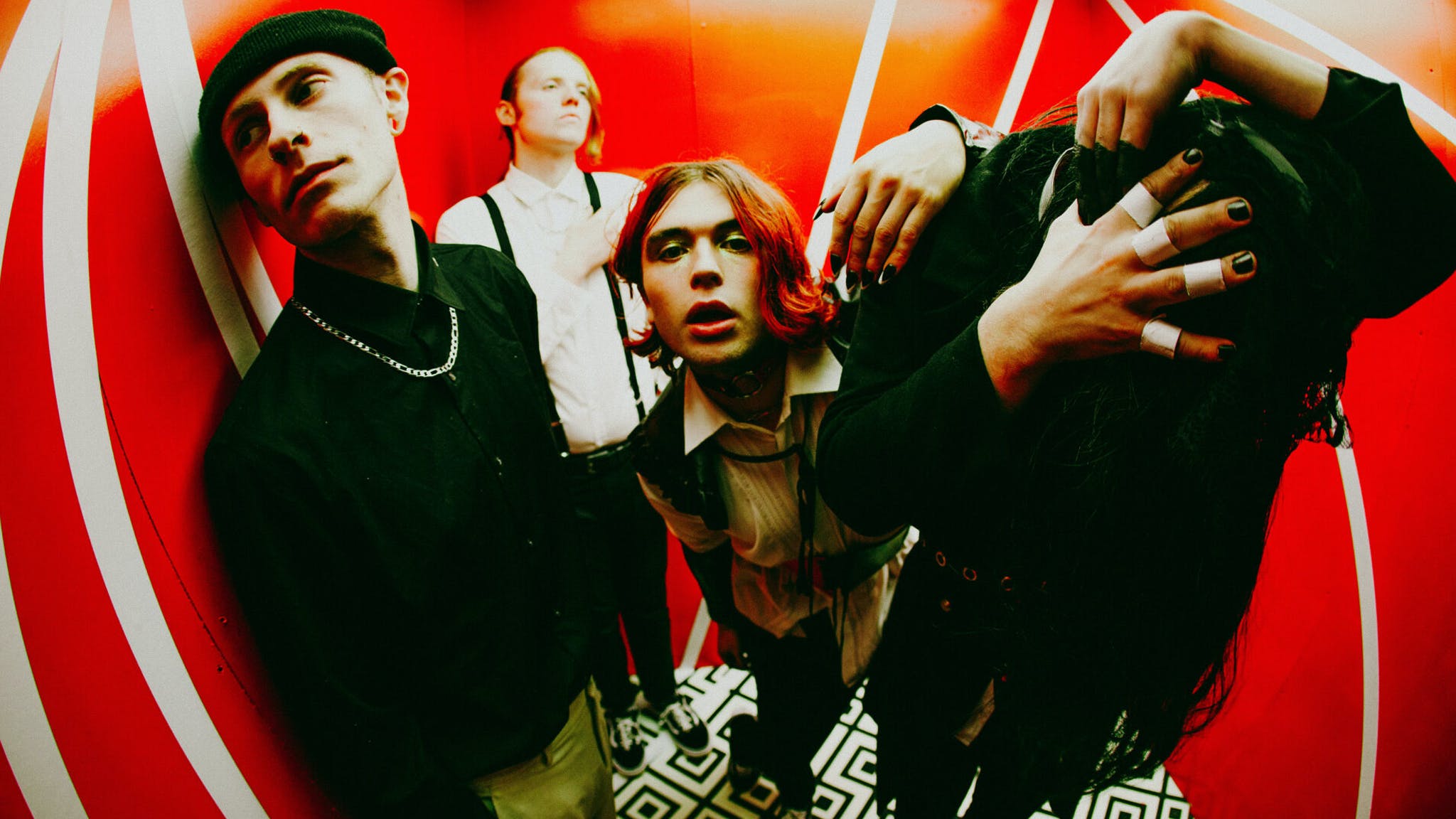 As the internet was gripped with emo fever a couple of weeks ago, Static Dress’ debut album Rouge Carpet Disaster arrived with ingenious timing. Their poetic, noisy take on the genre, and the intricate world-building that came with it, justified every drop of the hype that had been building for months, solidifying their position as British’s rock next future megastars.

Next week, everything comes full-circle, where they return to the place where some of the album’s songs were debuted live: Download Festival. Frontman Olli Appleyard tells Kerrang! exactly what fans can expect…

Your debut album Rouge Carpet Disaster came out two weeks ago. How does it feel to finally have those songs finally out in the world?
“It’s a very strange and surreal feeling because this album has been a massive secret for a good part of two years now. We've always been dropping Easter eggs and stuff like that, and I’m just like, ‘Now what?’ It’s a weird one, it's pretty overwhelming. I can't really wrap my head around anything at this point. For so long, this thing was locked in a box and hidden away. Now people are like, ‘Oh, I know this song, I know this song…’ and it kind of feels like people shouldn't know about it. Friends would ask me about it and I just pretended it didn't exist because if I started acknowledging it and giving it life, I'd want to start putting it out sooner. I realised that if it was rushed, and with the state that the band was in at that point, it wouldn't have the life that it now has.”

You’ve just been in Malta for Bring Me The Horizon’s weekender. How was that experience?
“Truly, truly unbelievable. The festival itself was ridiculous. We played our set and obviously being first band on you're always gonna run into technical issues, so it wasn't a 10 out of 10 performance by any stretch. We still put on a good show and had a good reaction and had a good crowd, which I was surprised at because I know that everyone went out the night before, and then we were on at quarter to two or something like that and it was so, so hot. I came onstage and I was like, ‘God, that stage light’s really hot,’ then looked up and was like, ‘Oh no, it's the sun!’ It was shining straight down on me. The next day was the throwback set where I got to do a feature with Bring Me, and that was really, really cool. It was pretty overwhelming, to be honest, just going out on a stage like that, and then it was over in a flash. Then we had our DJ set, which a lot of people actually really got into. A lot of people who missed our set went to that [thinking we were] going to play emo music and we ended up playing electronic and hardstyle for half an hour. It was pretty interesting, to be fair. I'd say Malta felt like a success. It was one of the best times I think as a band that we've ever had after the two years of slugging it and going through the hard times as much as everyone else.”

And next you’re heading to Download, opening the third stage on the Sunday. What can we expect from your set?
“Hopefully, the best 25 minutes we could possibly give. We're on pretty early on the Sunday, and we are nervous about it. But at the same time, if you are there, it's definitely something that you're gonna come away from happy that you've seen!”

You had the challenge of opening on the Sunday of Download Pilot and you still aced it…
“Oh no, not Pilot! We had so many problems. It might have seen okay to the outside, but I started having a massive asthma attack, it was really bad, and I threw up onstage during the first song. I ended up coming offstage and then blacked out and no-one knew about it. But for me in particular – I can't really speak for everyone else – this [year’s] a redemption of what happened at Download Pilot last year.”

You played some of the songs off Rouge Carpet Disaster at Pilot, but they were mostly under working titles, right?
“At that point, not all of them had their final titles yet. We put them on a setlist because [although] I didn't want to be giving away the song names, at that point we only had five songs out or something like that. We threw on Lye solution, Courtney, just relax I think was on there as well. Courtney’s one which sticks in people's heads, because it's the heaviest as a band that we've ever been and it's the heaviest we will probably ever go. So many people who have waited for that all the way up until two weeks ago. They’re like, ‘This is the song, at long last!’”

How is it playing those songs live different now that people either know those songs or they can go and find them online afterwards?
“It’ll be a bit weird, because we've only played one show since the album’s release. I'm looking forward to these next few festivals, where people actually know the new material. I’m excited to see the reactions. It was weird [in Malta] because there was a few people who knew all the new songs, and we were looking out in the crowd, saw them singing them back, and my brain was like, ‘You shouldn’t know that!’ When we did the headline tour just before the record dropped, we played some of the new ones, obviously, and the people who were goldfishing it and I'm like, ‘You don't know it! You’re getting the words wrong!’ But now this time around, we’re going out and playing it and people are mouthing the words back and I'm like, ‘Oh, wait, you do know this!’ It’s a bit odd!”

You also just announced a headliner at The Underworld for the end of August! How are you feeling about that?
“I’m trying to put some more stuff together to make it a show which you're not going to forget anytime soon. We’re putting everything we can into it to make it matter. It’s our last headline show of 2022, so if you like the album, I wouldn't miss that show…”

Catch Static Dress at Download Festival this summer. Get your tickets here.