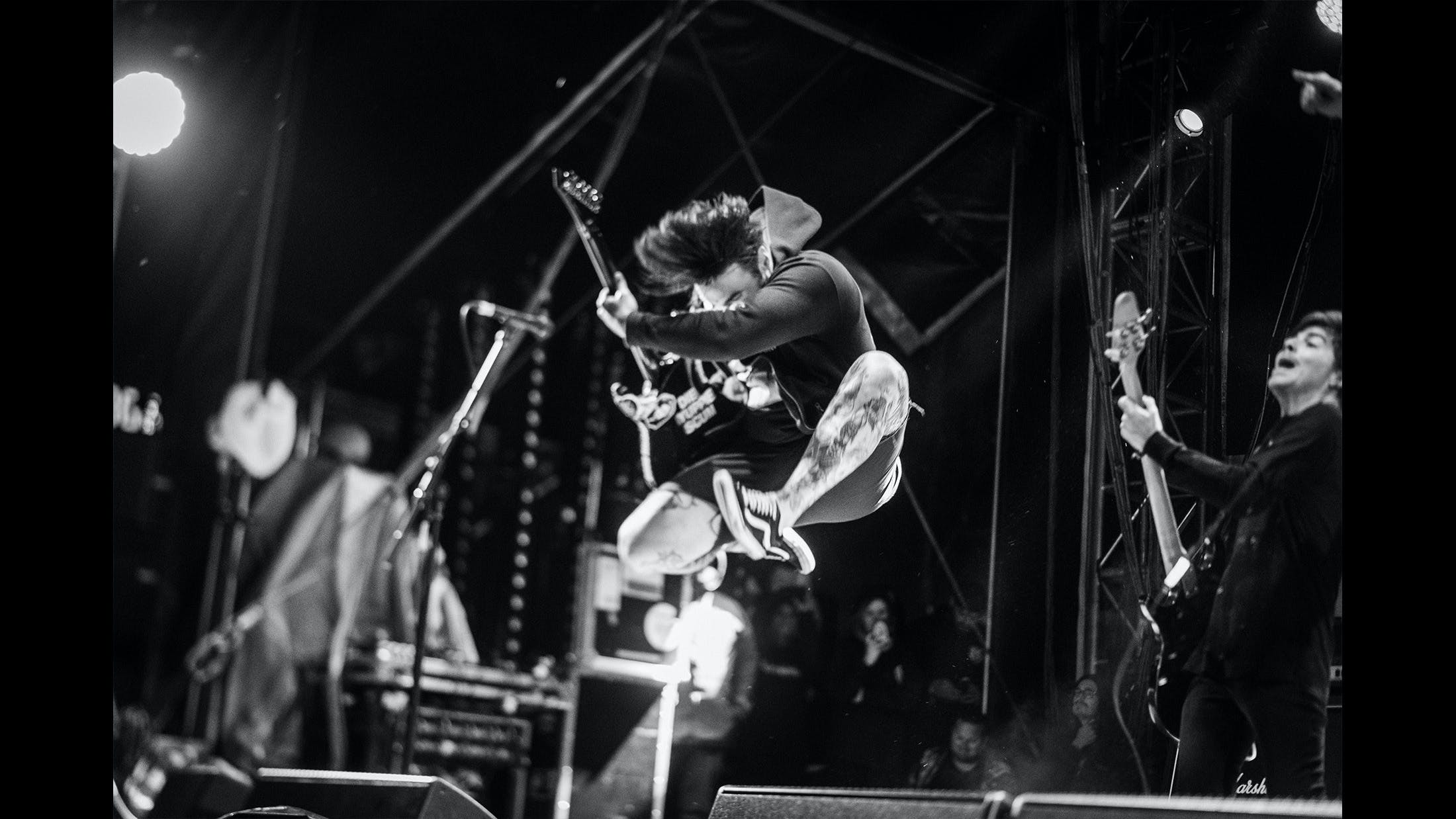 While UNIFY Gathering is jam-packed with important, game-changing bands this year, there are few acts around quite as extraordinary as Stick To Your Guns.

It was only right, then, to catch up with frontman Jesse Barnett and guitarist Josh James before their set at the festival, to hear their opinions on the positive state of our scene right now, as well as their brilliant 2017 album True View, and their (pretty flippin' wild) experiences of touring Australia over the years.

Hey, guys! There's a lot of focus on the hardcore scene now – especially with the likes of Code Orange being nominated for a GRAMMY… what do you think makes this current new wave of bands stand out so much?

Jesse Barnett: “Any time a band like Code Orange wins – and I don’t mean wins a GRAMMY, but them being nominated for a GRAMMY is a fucking win – the whole scene wins. That just opens up doors for everybody, and I think that’s fantastic.”

Josh James: “It could be something like [the GRAMMY nominations] where it just does inspire more and more people to also play music like that.”

Jesse: “These bands are just free from bullshit, and they’re just singing about things that I think are important, and things that people don’t really want to talk about anymore. Here’s a topic that a lot of bands are talking about right now: even though they’re making heavy music and screaming, it makes them a pop band. Lyrically I feel like these bands can be pop bands, because pop music tells us that you are perfect just the way you are, and I think that that is true in a certain sense. What you are – whether you be gay, trans, African-American, whatever it may be – there’s nothing wrong with the choices that you can’t make; I think that that’s perfect. But I feel like a lot of us need to challenge ourselves a little bit more, because we aren't filled with anxieties and depression and all sorts of complexes and insecurities that we tend to project onto other people. I don’t think it’s fair when pop music is just like, ‘Nah, fuck it, you’re perfect just the way you are.’ What I’ve always loved about this music is that it forced us to ask questions of ourselves and of our surrounding world. And so when you have bands like Employed To Serve and Venom Prison, they fall under those lyrical topics of going, ‘No, you're not perfect just the way you are – none of us are. What you are is great, but who you are is a completely different question.’ I think we need to be a little bit more conscientious when it comes to those kinds of questions – and those bands, to me, do that.”

You're playing UNIFY Gathering alongside the likes of The Amity Affliction, celebrating 15 years as a band, and Parkway Drive doing their 'A decade of Horizons' shows. Would you do anything like that?

Josh: “I think for us, because we’re so hyped on the new record, True View, we love playing new songs, so we’re on that high. But in five more years, whenever it’s the 10-year anniversary for [fourth album] Diamond, I’m sure we’ll play some shows. But, for us, we want to play songs live that we love playing to a crowd, and that a crowd loves hearing from us. So maybe we’ll do that with Diamond.”

How are the True View songs gone down live so far?

Jesse: “We’ve only really done it in Europe, and it went over great. That’s our biggest ‘market’, so I think that’s why this year is so exciting, because now we get to play it in Australia, and then our next tour is with Architects in the States, and so this will be the first time these brand-new songs will see these territories. So it’s always exciting. It’s nerve-wracking as well, because you just never know how people are going to react, but I love that.”

Josh: “And I think collectively we’re not so concerned on how it’s going to happen. I think there’s maybe a little more confidence walking onstage with these songs. Maybe we’re more confident in the songs than we have been in the past, or maybe it’s just because we’re more comfortable people. But it’s been awesome.”

What are your favourite memories from touring Australia?

Jesse: “Jumping off shit. Josh has got something that’s pre-Stick To Your Guns…”

Jesse: “It’s funny, when I first came here, I was so excited. I was just like, ‘We’re going to fucking Australia, oh shit!’ And then I got off the plane in Perth, and my first reaction was, ‘(Shrugs) Looks like San Diego!’ But then that obviously ended up not being true once I actually explored it. We went to Surfers Paradise one time and we went diving, and it was a crazy day – there were turtles swimming around us, and then we went to the beach and there were dolphins in the waves, and I was just like, ‘What the fuck is going on? This is insane!’ It’s a fantasy land.”

Josh: “The first time I ever came to Australia, was in the early 2000s with one of my old bands, and Winston [McCall] from Parkway Drive was actually our merch guy and driver! And Parkway played a Byron Bay show and I think they covered a Bleeding Through song, and we were like, ‘Aww, that’s cute that Winston has a band’ (laughs). That first day we went swimming and they were like, ‘Hey, you guys like to jump off shit?’ and we were like, ‘Absolutely!’ and we instantly made great friends, and then within an hour [ex I Killed The Prom Queen vocalist] Crafter pissed on my head. And then he got a face full of human faeces from somewhere – I’m not going to say who from – and then I was like, ‘You know what? This place is pretty good!’ and I was a fan from that moment on (laughs). And then that night was the drummer’s birthday, or something like that, and then I can’t say anything because I don’t want to get them into trouble… but I think Australia’s always been one of those places that has that familiarity of home, but it has extreme differences that are almost comical. My experience is that it feels so light-hearted, and such a good time, that it’s one of those things that every time I come here, I’m like, ‘Alright, yeah!’ It doesn’t matter what goes wrong, it just feels good to be here.”

UNIFY GatheringStick To Your Guns

Scowl have announced a couple of 2022 UK headline shows

Following their UK support slot with Stick To Your Guns, Scowl will be playing a couple of headline dates in Manchester and Brighton.

Stick To Your Guns return in fiery form with their first album in half a decade...