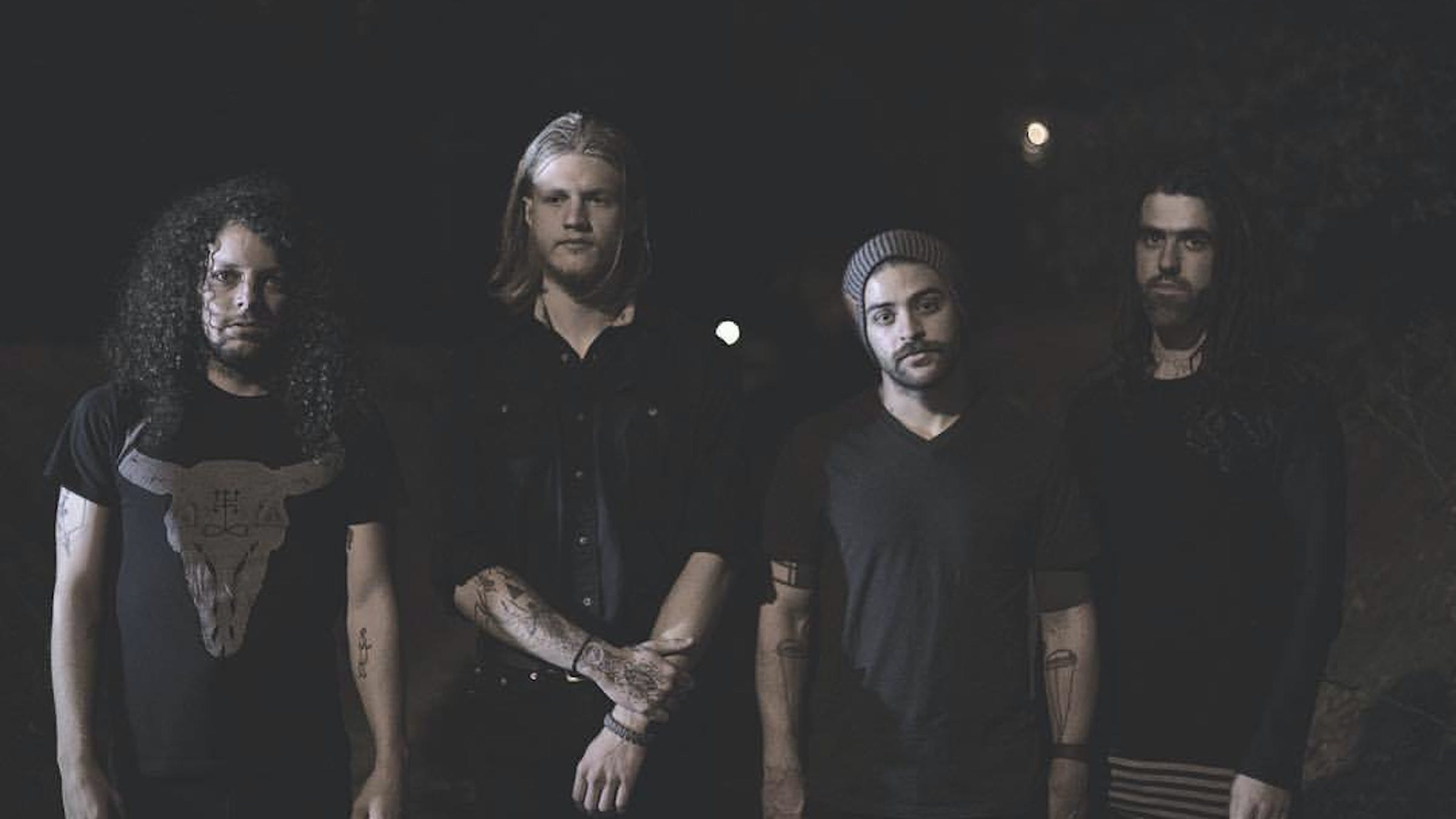 For Sufferer, sad songs about breakups and family situations aren’t enough. The California quartet formed with an express mission: make music that directly addresses depression, anxiety, and mental health issues, in the hopes of bringing awareness to these subjects and make those dealing with them feel less alone. The band, whose members’ other projects include Hail The Sun,I The Mighty, and A Lot Like Birds, considers themselves a “mental health project,” eschewing the typical approach of leaving personal lyrics up to interpretation, and instead confronting these mental and emotional issues in no uncertain terms.

“The broader the strokes we can use to paint these pictures, the more we can connect with just about anyone,” says guitarist and vocalist Shane Gann. “When it comes to songs about a person’s own breakup, it becomes very hit-or-miss if the listener is going to relate with it at all. Our goal was to make it easier for everyone. My girlfriend, who has probably never listened to a full rock record in her life, has been listening to it in her own time and connecting with it. She wasn’t even in the picture when we were making it.”

The band’s self-titled album charges head-first into the struggle. The 10 tracks thereon confront not just the looming subjects of anxiety and depression, but the various symptoms and trials dealt with by those who suffer from these conditions: codependence, a feeling of paralysis, and the saving grace of realizing that there might be others out there feeling the same way. To drive their point home, the band is giving away 35% of the album’s profits to the Anxiety and Depression Association of America, literally putting their money where their mouths are.

“We always knew we wanted to donate, even for the people who didn’t listen to this record,” says Shane. “If you boiled down the mission statement of the band, it’s about spreading awareness. Informing people, broadening the light that is shone on these things. From the get-go, we didn’t want to go the label route. This project is something for the community, and I didn’t want to knock on any doors I was unwelcome at...It just came down to how much we wanted to donate.”

When I read about Sufferer, it was presented as less of a band and more of a larger project concerning mental health in music. To you, what is Sufferer, and how does this focus on mental and emotional health inform what you do?

The more and more we continue the project, the more Sufferer has fallen into that niche corner market that you described. The more we try to find out what to do next, the more we’re finding ourselves saying that we don’t need to follow the well-worn path most bands take, with writing and touring. We’re obviously doing both of those things, but we are starting to learn with this project that people are most connected with the subject material than a specific song or show. The overall message is what people are connected to. What Sufferer means to me is absolutely a direct musical outlet for people to connect with others who are talking about this subject in a way that makes sense to them, and to feel less alienated by mental issues like anxiety and depression.

There are a lot of bands who play music about anxiety and depression. How did Sufferer decide that this was going to be the specific focus of the band? I assume you guys have had experiences with mental health issues in the past...

Absolutely. That’s definitely where it stemmed from in the beginning. For me, I thought myself past all my anxiety, going to therapy and sitting in my room to think of ways to cope with my mental and emotional health. However, it just became so apparent to me that no matter what I do, I’m still going to feel the effect of those things in other people, close to me and far from me, and that, combined with being in such a dark situation not too long ago, gave me this idea. It was just the perfect storm. I really wanted to write a story that conveyed the gamut of depression and anxieties that people could go through in just one day, to try and reach listeners who hadn’t considered that other people could feel that weird, lonely way people do. I guess how we differentiate from other bands is that usually, they are doing it in a much more personal perspective. Our work is personal, but it’s also vague enough where anyone could listen and attribute the material to any part of their own lives. Our main goal is to have the music be more generalized for people to find more of a relation with it.

When bringing the band together and broaching these heavy subject matters, how much of this was being really vulnerable and honest about it? Did it require for you guys to be open about all your personal experiences?

Yes, and no. It was already common knowledge between me and Cory [Lockwood, vocalist], who fronted the lyrical side of our self-titled, that he had been dealing with a lot of things, just by seeing how personal the music he released with his band A Lot Like Birds is. I was happy to be given an opportunity while writing and talking with the guys to be more open about some things that I have experienced, that I probably haven’t told the members of Hail The Sun. It was a total opportunity to “vulnerablize” ourselves. Our drummer, Blake [Dahlinger], hadn’t really suffered from depression and anxiety himself, but he had definitely been familiar with people who had, and he’s such a caring person who emphasized with the whole thing so strongly, that he wanted to be as part of the idea as he could be. Forrest [Wright], another vocalist on the record who’s also worked on all the artwork we have for the album and shirts, is a current sufferer. We really put our stories in each other’s faces, and while Cory was organizing the lyrics for the record, Forrest and I would be feeding him any ideas that popped in our heads. Maybe even a dark line we thought of from many years back, we’d just feed him that.

It’s great seeing a band that isn’t just like, “Alright, first an album, then a tour, then another album...” and has more of a message.

Music is a very specific artistic outlet where we choose certain types of sounds that we enjoy or vocations we join. To me, it feels like in certain aspects, [most bands] may be missing the mark on what music should be. Rock’n’roll and its roots to me came from hardship, from the blues to punk. It was just this ball of energy that people had inside of them, and to me, it feels like we got too far from those roots that drove rock n roll. My personal belief is if a situation comes up or an idea arises that has music not following that path or hitting those benches, that’s the most appropriate use of that project. If the project asks for more, give it more.

In 2019, what this project represents is more relevant than ever. Moving forward, what do you hope Sufferer can do?

There’s no time like the present, especially in relation to mental illness. Its detriment is very apparent on our culture. I guess our goals would be to reach more people with our message and stories. Specifically, in regards to those stories, we have talked about writing a new record, and it’s become difficult to want to write a story that we did. So I think a goal that we have is to collaborate more with people who want to be part of this project. It’s always been collaborative. I was really inspired by Hopeless Records when they’d put out their Take Action samplers, where a portion of the proceeds went towards a charitable organization. I’d love to reach out and bring other performers. On Chapter IV of our self-titled, Sergio Medina from Stolas come in, and he drowned himself in caffeine to a point where he got into this really uncomfortable panic mode, and then I had him track guitars. That one is a bit more out there, but those sorts of opportunities I love. The more voices, the better.

Sufferer's self-titled album is available for purchase now. To donate to the Anxiety and Depression Association of America, visit their website.