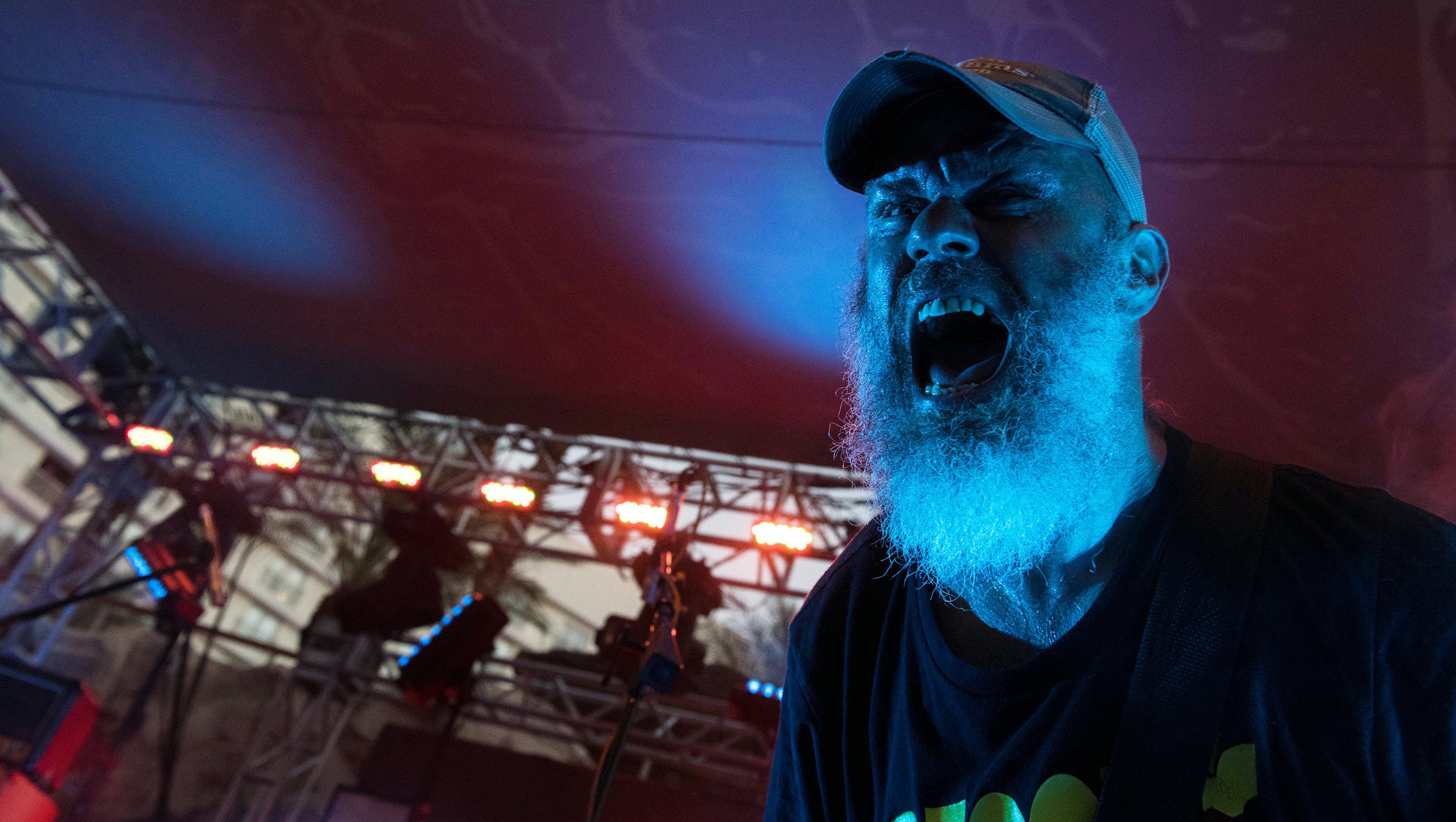 For one long weekend each year, America’s Glitter Gulch dulls with doom.

It began in a small California warehouse in 2013. Now, five years later, it’s a hotel-wide, Sin City takeover. If we have any doubts about the state of metal today, the Psycho Las Vegas fest lays them to rest.

“I think [the heavy scene] is fucking great,” says Will Lindsay, guitarist and vocalist of Chicago-based doom band, Indian. We chat about this era’s industry over $13 Budweisers and self-deprecation, a couple of days before Indian’s crushing Sunday set will flatten out The Joint, a venue at the Hard Rock Hotel & Casino.

“This [switch from major to independent labels] kind of had to happen,” he begins. Some say it really kicked off in the early 2000s. Will agrees, and breaks it down simply: “These big labels thought they were gonna turn every band into fucking Mastodon with huge recording advances, and then the bottom fell out.” Still, this shift made experiencing touring bands more accessible than ever. “If you’re a full time band, you have to be on the road constantly...you can’t really put out a record and sit on royalties,” he continues.

“You gotta bust your ass and fucking do it.”

ABOVE: High on Fire

Several bands on this year’s lineup do, indeed, fucking do it—either perpetually traveling or writing music as we speak. Psycho participants High on Fire is touring in support of their new EP set to release in early October; Boris is touring the US for their 25th anniversary; and Detroit’s Acid Witch are playing fests in advance of the release of their upcoming Evil Sound Screamers LP.

Still, Mike Tuff—the latter Motor City crew’s guitarist—is a little conflicted about the state of heavy affairs. “I’m still not sure I’d classify it entirely as a positive, but metal in the US is definitely at the highest popularity I’ve seen in my adult life,” he says. Acid Witch plays a cackling set to Paradise Pool’s packed crowd Friday night—many fans still shirtless in leftover sunglasses, perfectly happy standing in dry heat.

“Large scale festivals stateside seem to correlate with the increase of interest,” Mike explains. “What’s definitely positive is that it’s good exposure for growing bands and provides a means to see a lot of international acts and groups that don’t tour regularly.” International bands like Scotland’s Dvne, Japan’s Church of Misery, and Europe’s Lucifer all slay The Joint on Friday night to Americans craving the sound of foreign soil.

Now the ground is damp. It’s Saturday, and a faint breeze hits the Paradise Pool crowd while Bayou sludge giants Eyehategod build-up with “Medicine Noose.” But the gust doesn’t come from desert air—instead it whips from the toilet bowl-pit in the shallow end, complete with diehards splash-stomping in boots and vests. One guy actually stops to do the George Washington pool hair.

Ethan McCarthy (non-day drinker), guitarist and vocalist of Denver’s Primitive Man, describes it aptly: “Vegas is like a cake that’s a little expired, but it’s all you got in the fridge. It seemed like a good cake two days ago, but now it’s just an old cake you have to eat.”

With his long dreads and hulking presence, Ethan may seem intimidating to some. But it only takes a minute to see this child educator’s warm-hearted nature. He speaks about casual and heavy subjects with the same tenderness he carries in his day job. “I feel like we need to take care of each other,” he says, when asked about reactionary internet culture. Yet his music is blisteringly heavy. Primitive Man’s set adds to the soul-crushing fog churned out by the day’s predecessors, like Polish black metal outfit Batushka.

Yet, no one grabs our attention like Danzig. Call it arguably valid paranoia, but Glenn Danzig has us leave our belts and wallet chains at the door, forcing press to check-in cameras at the bell desk. We oblige, because after all, we just want to see our library-boasting antichrist.

“We haven’t played this song in awhile, because fuckin’ riots used to break out. This song is called Bodies!” We nod our heads. Glenn frowns when, to his dismay, no one moshes., Before moving on to the next track, Glenn “Ju Ju Bone” Danzig tells us all to “suck donkey dicks.” For a moment we thought he’d huff off stage Morrissey-style, but he doesn’t cut the set short. He closes Saturday night performing “the most enjoyable record [they’ve] ever done in [their] life.”

Sunday is bittersweet. Some friends check out early and head to the airport, with the malaise of returning to unfulfilling day jobs. Others linger, determined to catch Dimmu Borgir, Necrot, SunnO))), and Enslaved. Enslaved’s vocalist and bassist, Grutle Kjellson, cracks a joke halfway through their set: “This next song is a Beatles cover. No, it isn’t, it isn’t, I’m sorry. It’s a song we wrote back in 1993.” The Norwegian legends were serious teens then. But today, their playful banter between eviscerating Viking metal is refreshing. And if metal weren’t thriving, we’d likely never catch them live.

In the hallways of the Hard Rock Hotel, a self-professed hesher from Hell Paso wanders to checkout in a genuine sombrero. Integrity’s frontman calmly tells loud, elevator drunks, “It’s not a train station, you don’t have to yell,” while international lovers kiss and trade Mercyful Fate shirts. The longhair in the lobby with a Larry David back patch claims, “Necrot are the death metal saviors of Psycho,” and a baby donning a Black Sabbath dress waves goodbye.

9 of the craziest rock star injuries of all time

From broken bones to amputated toes, here are nine of rock music's most hardcore injuries.