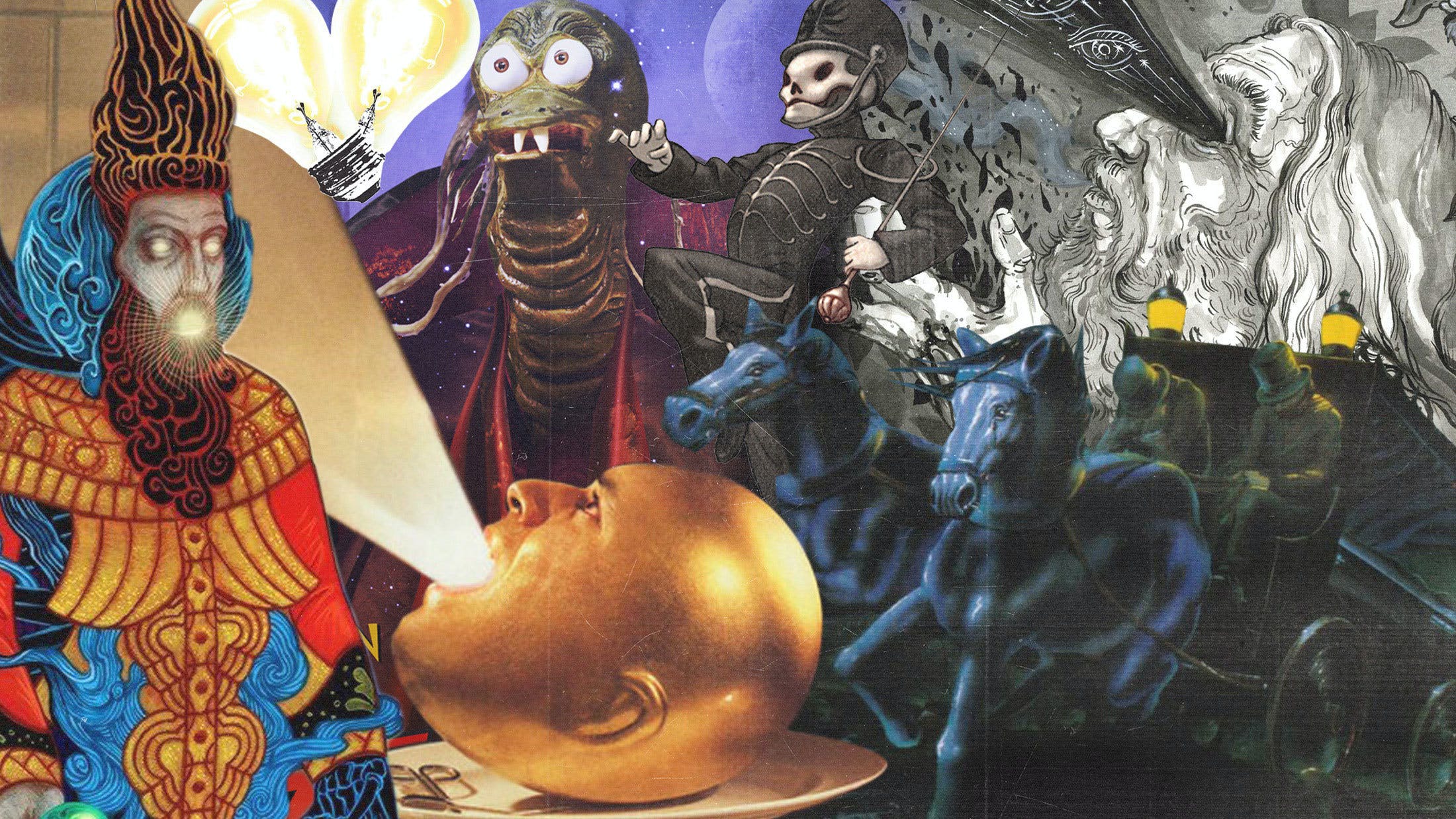 For as long as musicians have been recording albums, they’ve been shaping them into grand, overarching concepts. Folk singer Woody Guthrie delivered a collection of songs about the Great Depression on his Dust Bowl Ballads album as early as 1940. Frank Sinatra released a whole slew of story-based albums, and the likes of The Who and David Bowie brought the concept to rock music in the '60s and '70s.

There’s been no shortage of concept albums in rock, punk and metal ever since. Sometimes the concepts are quite straightforward, but other times things get a little… weird.

Here are a dozen of the craziest concept albums for your delectation.

Canadian loon Devin Townsend has never been known for his restraint, but on Ziltoid The Omniscient – a true solo album on which he wrote and played everything – he gave his demented genius full rein. The result is a rock opera about an alien who invades Earth after demanding the ultimate cup of coffee. It comes with narration, a full cast of character voices and a fourth wall-breaking sense of its own preposterousness.

Primus – Primus And The Chocolate Factory With The Fungi Ensemble (2014)

Oompa Loompa doompa-dee-doo, we’ve got another mad concept for you... As funky avant-garde ensemble and South Park theme composers Primus decide to reimagine the soundtrack of the original 1971 film Willy Wonka & The Chocolate Factory. “The tour and the album are solely a marketing tool just so we can sell candy bars,” frontman Les Claypool told Rolling Stone, and we’re only half-sure he was joking.

The first full concept album from avuncular Satanist King Diamond was a full-on fright-fest built around ghosts, family secrets and the vengeful spirit of a stillborn child. The singer told us that the story came to him virtually fully-formed in a dream. “I was dreaming that night and I woke up because of a thunderstorm,” he said. “I was so scared that if I went back to sleep I would forget it all by the morning. So I got up against my will, made a cup of coffee and started getting it all down.”

We could have gone with giant whales, psychic Sasquatches or an arid metaphor for cancer. Of all of Mastodon’s concept albums though, Crack The Skye is perhaps both the most outré and the most emotionally affecting. It combined astral travel, the mystic Rasputin, the Devil and Stephen Hawking's theories on wormholes while also serving as an homage to Brann Dailor’s sister, Skye, who died by suicide at 14.

Danger Days… would be another strong contender, with its post-apocalyptic themes reminiscent of David Bowie’s dystopian Diamond Dogs, but there are plenty of other sci-fi parables out there. The Black Parade is not only more iconic, it’s based on a more singular concept with its theatrical and inventive meditation on death and dying. And, of course, My Chemical Romance took the concept beyond the album itself, adopting alter-egos for the first time as they took the guise of The Black Parade.

Is Dopesmoker a concept album? Well, in as much as it’s a single, epic, hour-plus song charting the journey of a procession of bong-wielding weed priests. It was actually first released in a chopped-up version known as Jerusalem, but works best in its intended format. Reminiscing about the creation of the album, frontman Matt Pike told Vice: “I don't know if you've ever smoked out of a coconut chalice with a hose, but dude, it's the highest you can possibly get. You forget your name, your address, you talk to the dog and the dog talks back. It gets fucking weird.”

We’ll stick with Matt Pike because he didn’t get any less weird in post-Sleep band, High On Fire. Quite the opposite in fact. De Vermis Mysteriis refers to a fictional grimoire conceived by Psycho author Robert Bloch and incorporated into H.P. Lovecraft’s Cthulhu Mythos. Pike’s take also involves Jesus Christ’s time-travelling twin brother. Of course.

Fucked Up have always been one of the most creative forces in hardcore, and they certainly showed that on this period-piece set in '70s and '80s England. It starts like a standard (if musically ferocious) rock opera, with a storyline following two characters in love. It soon gets all meta on its own ass though, with the titular David realising he’s a character in a story and vying for control of the plot.

The Mars Volta’s mix of prog rock, jazz fusion and metal psychedelia could be dizzying enough, but then you add a debut album based on a short story written by vocalist Cedric Bixler-Zavala and ‘sound manipulator’ Jeremy Ward – who died a few weeks before the album’s release – and things get seriously weird. The lyrics are enigmatic, but follow protagonist Cerpin Taxt, who enters a week-long coma after overdosing on a mixture of morphine and rat poison. It also reflects the death of their friend and fellow artist Julio Venegas.

Coheed And Cambria – Good Apollo, I'm Burning Star IV, Volume One: From Fear Through The Eyes Of Madness (2005)

Staying with prog rock and big hair, Coheed And Cambria have spent most of a 20-plus year career working on one huge over-ambitious concept. Sci-fi storyline The Amory Wars has resulted in numerous comics, graphic novels and albums. Good Apollo Vol I… differs from its fellows in that, like Fucked Up’s entry, it gets a little meta. We step outside the story to meet The Writer and of course, his twisted subconscious in the form of a 10-speed bicycle. Naturally.

The Finnish band had already written an intricate concept album in Time I, but the follow-up was even more ambitious. Essentially it’s a metal version of Vivaldi’s violin concerto The Four Seasons, featuring four multi-part sections with added themes of paganism, reincarnation and rampaging, reborn undead hordes.

The Chicago murder metal crew have an unhealthy obsession with serial killers. Guitarist/vocalist Lance Lencioni (aka Corporate Death) has claimed in interviews that he met John Wayne Gacy and went to the trial of Jeffrey Dahmer. This album is a biography of the Milwaukee Cannibal, addressing Dahmer’s life and crimes in chronological and historically accurate order. It’s also not for the faint-hearted.