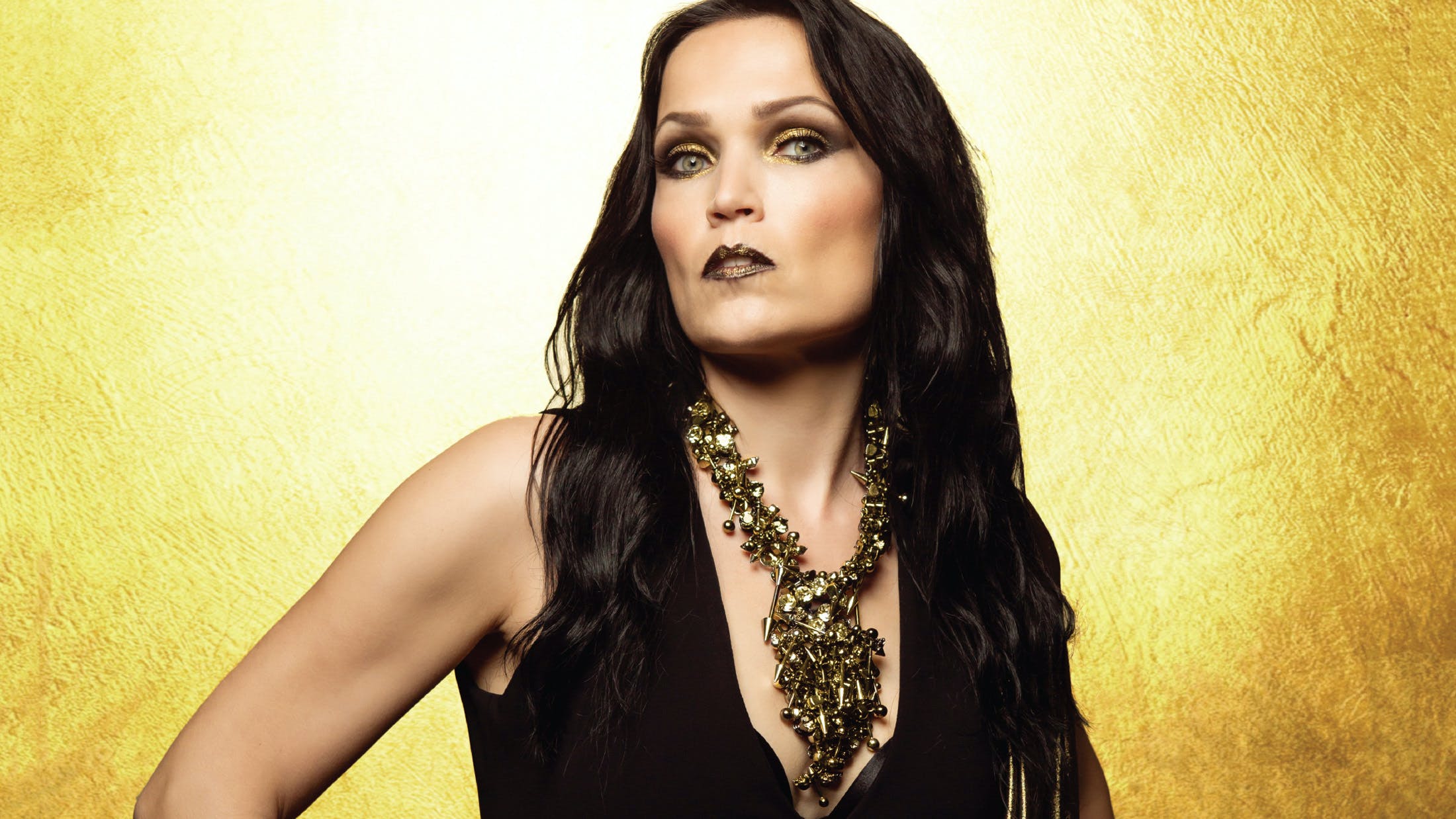 Few voices have been as inspirational in symphonic metal as Tarja Turunen’s. Her classically inspired three-octave range helped rocket Nightwish – the group she started with Tuomas Holopainen and Emppu Vuorinen in 1996 – into the heavy music stratosphere, eventually becoming one of the biggest bands of their kind. Since parting ways in 2005, she’s been keeping busy as an artist in her own right, with her seventh solo album In The Raw arriving to great acclaim today. Here she talks us through the new music, its star guests and – after being reunited on stage with old bandmate Marco Hietala in December 2017 – what the future might hold…

What made you choose In The Raw as the title for your seventh solo album?
“I would say this is the most personal album to me, it’s the one I wouldn’t have been able to write until this moment in my life. I guess I feel like I had to just get it out of my system… it was a painful process, in many ways, which is why I kept it raw.”

What exactly was painful about it?
“It was a time of great personal turmoil. Through the music, I’m telling stories about things that have happened to me or people close to me, like my family. This music is the place I’ve been living for the last few years… it’s all there. I try to keep my lyrics open so people can find themselves in there or put their own stories to them, I want the songs to be something special for them. In terms of the personal side of it, the last year has been very tough on me, both physically and mentally. I was exhausted from all the touring. At the end of the year, I arrived home just two days before Christmas and felt completely burned out. I said to myself, ‘There’s no way you will finish your new album in the next month and a half’ which was the deadline I was working to. The music was there and everything felt good, but I hadn’t started with lyrics. It felt very surreal and difficult.”

So a lot of it came down to creative frustrations?
“That was some of the pain, yes, because I felt exhausted and incapable of delivering. I’ve always been a perfectionist in everything I do. And I’ve had to learn how to avoid that perfection-ism. The Silent Masquerade was especially difficult to write as it was tied to one of my family tragedies. I always knew it was going to be hard for me to sing live. When I heard it all finished, I wept like a baby! Ever since I turned 40, which feels like a good and magical number, I’ve felt like doing things for myself more than before. I’ve feel better than ever in ways, but that sense of exhaustion inside of me had to come out.”

READ THIS: Every Nightwish album ranked

It must have felt good when it finally did...
“Writing these feelings into the lyrics helped me feel free. It was liberating, to the point of me feeling I couldn’t write any more songs after this… and actually, I haven’t been near my piano since (laughs). The time will come for that. This album means the world to me. I went deep within myself like never before. Much like the song The Golden Chamber: Awaken / Loputon Yö / Alchemy, I’d say this whole album is a journey. For the promo shots, you see pictures of me in a cave… it was symbolic of being in a place deep down, under the earth, to find your paradise or whatever you are looking for.”

You’re one of the biggest selling Finnish artists of all-time. Does that make it harder to feel as if you’re still such searching for that paradise?
“I know! I am loved, I can love, I am healthy… those are all the things that matter. Through this album, I learned not to take things for granted. I have to enjoy moments of everyday life. I see my child, she’s now six years old, and know I’ve done at least some good in life. But that’s the basis of it all… I am very fortunate and grateful to have been able to express myself for so many years. I have enjoyed the respect of my colleagues and fans in both metal and classical music, but it hasn’t come for free. It’s been a lot of work. My biggest blessing, my voice, has also at times been a curse.”

You must see metal and classical music as two art forms with a lot more in common than appearances might suggest…
“Both styles have so much in common. I feel music is just emotion, it can connect people from whatever background. It’s a very personal experience, we all have things we like and don’t like, but ultimately music is just emotion. Metal and classical music are both very emotional genres.”

READ THIS: Floor Jansen on the Secret Sari Project

Which do you think are the heaviest classical composers for rock fans to check out?
“You could pick any of the Wagner operas for example or Russian composers like Tchaikovsky and you will find a lot of heavy metal ideas in there. Or take something like Sibelius’ Finlandia, when it gets to the paddle part in the middle of the piece… add some guitar to that and it will blow you up! It’s never been a battle for me to be involved in classical and heavy metal at the same time. There’s been no struggle there except for the amount of time and work it’s taken. People have seen me working hardly purely in classical music, being well prepared, and I’ve enjoyed their respect. I’ve been doing this for so long that now when I do classical performances a lot of heavy metal kids come and enjoy it too. I’ve had people telling me how it’s inspired them to book opera tickets and embark on new discoveries. It’s good to break boundaries. Or the other way round, I love the idea of a classical music lover at a big rock show. I’ve never been afraid of mixing the styles. If I was afraid, I never would have sung on that first Nightwish demo.”

Björn ‘Speed’ Strid of Soilwork and Tommy Karevik from Kamelot make an appearance on the tracks Dead Promises and Silent Masquerade, respectively…
“I’ve been a huge fan of Björn’s voice for many years. He sings with lots of emotion and charisma, plus he’s very open-minded. He has this ability of growling really harsh vocals, which I could never do, as well as all this beautifully clean stuff. He was so nice to work with and really knows how to colour the music he sings over. I actually wrote all of these songs for my voice, so it can be hard sometimes trying to get the male range to fit where the female range tends to be. I think Bjorn and Tommy both might have initially struggled with what I sent over, but it all worked out fantastically.”

You team up with Lacuna Coil’s Cristina Scabbia on the track Goodbye Stranger. How did that come about?
“I think we first met in London many, many years ago at some event. I remember taking a picture with her, the first of many. We stayed in touch, sometimes calling each other and always finding each other at festivals. It’s always been bubbling away, the idea of working together. Once I had the right song, I decided to reach out to her and ask for a favour. She’s a super-cool woman and incredibly charismatic.”

READ THIS: Svalbard's Serena Cherry discusses bullying and the sanctuary of metal

And that same sense goodwill has even been extended to those who ended up singing in Nightwish after you…
“Of course. I’ve shared the stage with Floor [Jansen] and have been inviting her to my shows. I care for her and love her, and only wish her the best. There is no competition between singers like us. We are all living in a man’s world, sort of. So each of us being out there, doing our own thing, can only be a good thing. It’s a sisterhood that is beautiful.”

On December 14, 2017, you reunited with Nightwish member Marco Hietala on stage for the first time in 12 years. Was it nerve-wracking on the night?
“Naturally I was nervous. I hadn’t seen Marco in 12 years, we hadn’t been in touch. So it would be silly to say I wasn’t nervous, but more than anything I was curious about he was doing. I just wanted to see him. On the day of the show, he came to knock on my [dressing room] door, as he’d been unable to make rehearsals. It was just like, ‘Hey!’ with a massive, long hug after 12 years apart. Just a few things were said like, ‘Great to see you’ and ‘See you soon on stag.e. Then we sang those songs, the last of which was Ave Maria, just the two of us with acoustic guitars. It was very intimate, yet in front of a huge crowd with thousands and thousands of people in front of us. That was a moment neither of us will ever forget. We were very emotional, the whole place exploded with emotion. It was beautiful.”

Could that mean there’s potential to re-join Nightwish for one song or one tour, who knows, maybe even an album?
“I know a lot of fans would love to see something happen, but it’s a very long distance away… Personally, I don’t see anything happening with me and them, to be perfectly honest. Marco came a little later into the band, he wasn’t there since the beginning, he was always a guy I was close to. Me and [Nightwish keyboardist/leader] Tuomas Holopainen, however, haven’t seen each other in a long time… but we have been in touch. It’s not bad. The past is what it is, we can’t change that. We can only change the future.”