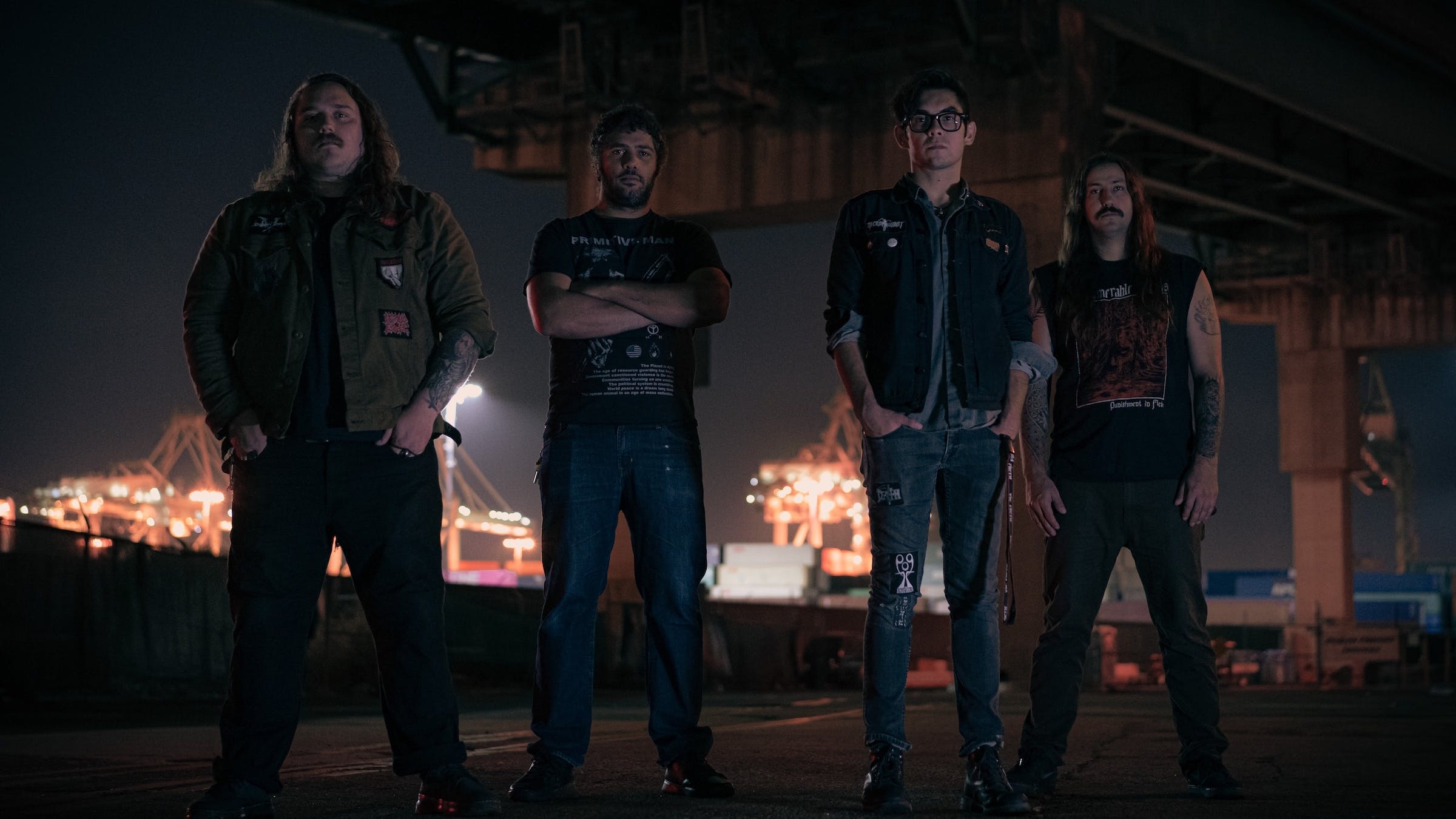 There's something uniquely grotesque about naming your band 'teeth' -- teeth are psychologically hideous, falling out during nightmares and looked after by medical professionals with a high risk of suicide. Thankfully, Californian quartet Teeth live up to their gag-inducing name, playing the kind of grueling, merciless death meta that will immediately knock their namesake out of listeners with weak constitutions.

The band's upcoming sophomore record, The Curse Of Entropy, sees Teeth moving into noisier territories. The record still has the arch guitar sound and audible loathing of their 2014 debut Unremittance. This time around, their, their is a more knotted, muscular discordance to their riffs, as well as a drum sound that rattles and clashes as though directly next to your ear. The end product is compelling and malignant, a gnarly expanding mass of metallic fury that is almost certainly malignant.

We caught up with guitarist Erol Ulug about what drives the band's monstrous mania.

It's been five years since your debut -- why take so long between full-length albums? What have you been up to?

The main factor contributing to the amount of time between releases was line-up changes. Alejandro Aranda is our fourth drummer at this point, and given the nature of our music (especially the new record), it’s not easy to come by drummers that are a good fit for our style. Besides that, some of the time between full length releases was spent on two splits, one with Fister and one with Barghest. Lastly, it simply takes a lot of time to craft and hone in on ‘your sound’ as a band. The writing process for The Curse of Entropy was pretty destructive in the sense that we scrapped a lot of ideas in the process of sorting out what we felt was the strongest material. Significantly more so than on any previous release.

What about The Curse Of Entropy are you most excited for people to hear?

We can’t say there’s any specific song or moment we’re excited for over any other, but rather we feel this is the record we’ve been wanting to create ever since the band began. Sure there’s certain moments we’re fond of, IE the hellish beginning of Vessel, [Gorguts frontman] Luc Lemay's guest vocals on Husk, and the ending section of Wither, but really we're proud of the record as a whole.

Given the full-on assault of the music, is there one instrument or aspect of the recording process that you find more difficult, or more necessary to get down perfectly, than others?

Yes, the drums are the most difficult to record and mix because they’re really dense, intricate and the backbone of our sound.

You guys have pretty storied backgrounds in music, with several projects in each of your pasts -- is there something you can express, or say, with Teeth that you cannot in other bands?

I can’t speak for the others so much but for me, Teeth is simultaneously the most distinct sounding and is by far the most intense project I’ve done musically.

You cover art is extremely colorful, especially compared to that of Unremittance. Was that intentional? What did you want the cover to express this time around?

The use of color in the album cover was somewhat intentional in the sense that we knew we didn’t want paint by numbers metal art, IE a bunch of black and white skulls. The extent and particular use of color was the work of the artist, Carlos Agraz, and he blew us away with what he came up with. None of us in the band are visual artists, and the last thing we want to do is micromanage someone who is. We saw some of his work and were drawn to how intense, vibrant and non-traditional (in a metal artwork sense) his style is and that’s what led us to choosing him for the cover art. We told him we wanted something that was visceral, celestial and conveyed the sense of tearing one’s self apart. We feel what he came up with really nailed combining those elements and gave us an album cover that is distinct and visually as loud and abrasive as the music it represents.

Listen to an exclusive advance stream of Teeth's The Curse Of Entropy below:

Teeth's The Curse Of Entropy comes out Friday, November 29, on Translation Loss, and is available for preorder.