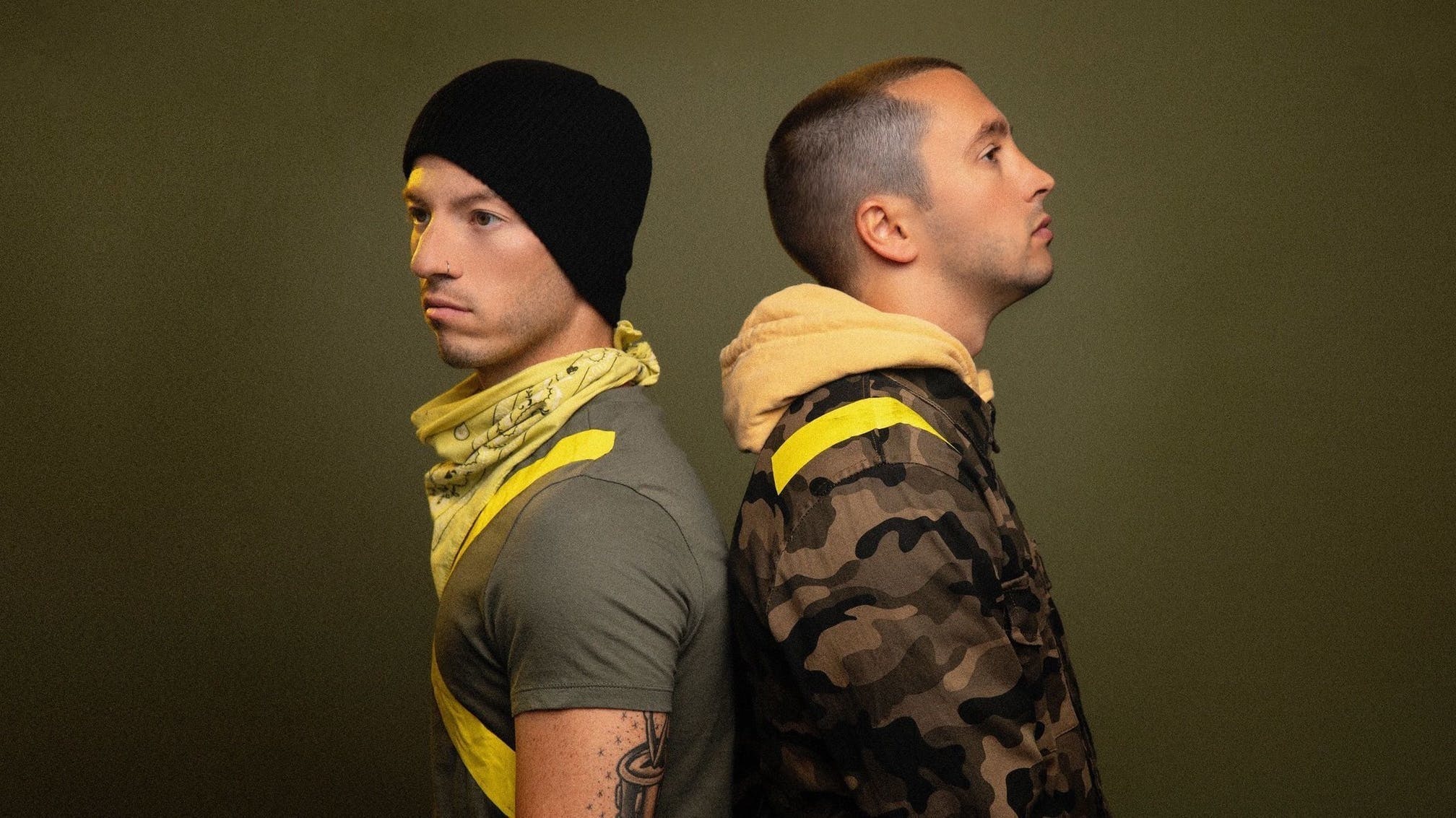 Tyler Joseph might wish he had a better voice that sang some better words, but his verbiage is more than good enough for the world, hence why his band twenty one pilots have sold *counts on fingers* …er, an absolute shit-load of records.

Obviously, Tyler’s words equate to more than record sales, though, and even casual enjoyment. They’ve created an entire community – the Skeleton Clique – and given fans something to belong to. In putting his own experiences with mental health struggles into song, the musician’s former scribbles have offered comfort and hope, and at times, actively tried to discourage self-harm and suicide.

It’s powerful stuff. And since twenty one pilots just put out two new songs for us to dissect, and attach our own meanings to - Jumpsuit and Nico And The Niners - we thought we’d flick back through the album booklets and pick our favourite lyrics Tyler’s written so far…

There’s been much sub-Reddit forum debate about who We Don’t Believe What’s On TV is about: Josh Dun (not likely), God, the Clique, or Tyler’s wife Jenna. Most people would put their money on one of the latter two, but regardless, it’s a sweet and powerful ukulele-backed lyric, that quite simply sees someone who had no desire to venture into old age, find a reason to stick around. We’ll raise a cup of Tetley and a Rich Tea biscuit to that.

9. ‘THE SONGS ON THE RADIO ARE OKAY, BUT MY TASTE IN MUSIC IS YOUR FACE’ – TEAR IN MY HEART

The first love song Tyler ever wrote, Tear In My Heart is actually about his wife. A woman whose face he finds so beautiful, he prefers it to music. That, or he’s really been tuning in to some shit radio stations. It’s pretty sassy, and extremely sweet. Combine it with the later lines, ‘You fell asleep in my car, I drove the whole time, but that’s okay, I’ll just avoid the holes so you sleep fine / I’m driving here I sit, cursing my government, for not using my taxes to fill holes with more cement,’ and Tyler’s proved himself to be a definite swipe-right. Among the sweetest twenty one pilots lyrics.

8. ‘I WAS TOLD WHEN I GET OLDER, ALL MY FEARS WOULD SHRINK, BUT NOW I’M INSECURE AND I CARE WHAT PEOPLE THINK’ – STRESSED OUT

Woeful coming-of-age track Stressed Out sees Tyler’s inner Blurryface (aka his insecurities) exposed to the world, and literally finding their voice in song (‘My name’s Blurryface and I care what you think’). This lyric cleverly highlights how adults aren’t supposed to be scared of anything, yet, when you reach adulthood, you find there’s plenty to be stressed out about and afraid of. And all of it much worse than monsters under the bed. Wish we could turn back time to the good old days, indeed…

7. ‘DEATH INSPIRES ME LIKE A DOG INSPIRES A RABBIT’ – HEAVYDIRTYSOUL

The magic of this twenty one pilots lyric is in the vivid picture it evokes, of a fluffy-tailed bunny hopping away from a rabid, drooling hound, its eyes-wide with fear. Being faced with death is the ultimate motivation, to find a way to survive, or to just make something of your life before it takes you once and for all. We’re all just rabbits running away from dogs when it comes down to it. Deep.

6. ‘IT AIN’T THE SPEAKERS THAT BUMP HEARTS, IT’S OUR HEARTS THAT MAKE THE BEAT’ – HOLDING ONTO YOU

There’s plenty of thoughtful lines in this song about taking back control of your own mind, lost to mental health, but this one stands out in both sentiment and catchy delivery. It sees Tyler use a clever play on music beats and heartbeats to encourage listeners to look inside themselves, and dance to their own tune, for… ‘It ain’t the speakers that bump hearts, it’s our hearts that make the beat.’ The take-away lesson here? LISTEN TO YOUR HEART. Class dismissed.

5. ‘IT’S ALL ABOUT MY FOREHEAD, AND NOW IT IS A DOOR THAT HOLDS BACK CONTENTS THAT MAKE PANDORA’S BOX’S CONTENTS LOOK NON-VIOLENT’ – MIGRAINE

The title might make Migraine seem like a song about literal head pain, but it’s all figurative. First, Tyler creates the ultimate intrigue by comparing the goings on in his extremely-troubled mind to a more violent version of Pandora’s Box. Then he then paints a gory picture of ‘suicidal crazed lions’ trying to eat him, with ‘blood running down their chin’, indicating that he’s literally fighting a war in there. It’s a wonderfully-creative way of describing the internal struggles some people face daily, and is one of the starkest and most memorable twenty one pilots lyrics.

4. ‘SINCE WE KNOW THAT DREAMS ARE DEAD, AND LIFE TURNS PLANS UP ON THEIR HEAD, I WILL PLAN TO BE A BUM, SO I JUST MIGHT BECOME SOMEONE’ – HOUSE OF GOLD

One of the loveliest lyrics, on one of the loveliest songs, this one takes a pessimistic view and flips it into a positive, whilst also somehow remaining pessimistic. We have no idea how he managed that. Anyhow, Tyler’s plan worked, because this track was released on 2013’s Vessel, the precursor to 2015’s Blurryface, and you know what happened after Blurryface came out? Tyler Joseph became someone! If you need us, we’ll be busy being a bum also.

3. ‘NO-ONE ELSE IS DEALING WITH YOUR DEMONS, MEANING, MAYBE DEFEATING THEM COULD BE THE BEGINNING OF YOUR MEANING, FRIEND’ – KITCHEN SINK

The great thing about this line is that – whether directed to the listener, or an internal monologue between Tyler and himself – it’s a well-meaning reality check, and a dose of practical advice to those who might be struggling. And it works, because he’s right: nobody else is dealing with your demons, it’s just you in your head, fighting that good fight. And if you can manage to take back control? Then it just might be the making of you.

2. ‘THE SUN WILL RISE AND WE WILL TRY AGAIN, STAY ALIVE, STAY ALIVE FOR ME’ – TRUCE

This lyric from Vessel track Truce might be simple in structure, but it’s extremely powerful in sentiment. “I just wanted to tell people: ‘Hang in there, you know, there’s someone out there who does know what you’re going through,’” Tyler explained in a Spotify commentary. “If someone is encouraged, at all, by the music that I write, then my whole life will be justified so, I mean, I would be crazy not to try.” And thank goodness he did try, because this line will have no doubt helped many, illustrating single-handedly how twenty one pilots' lyrics are so responsible for the loyalty of the Skeleton Clique.

1. ‘YOU ALL HAVE GUNS, AND YOU NEVER PUT THE SAFETY ON’ – GUNS FOR HANDS

While Guns For Hands sounds pretty upbeat, it’s another song tackling the serious subject matters of self-harm and suicide. You can always rely on Tyler to look at a situation in a way absolutely nobody else would ever be able to think of, and here, it sees him compare the hands of his fans to guns without the safety catch on. The thought of what they could potentially do to themselves literally keeps him up at night, and in the song’s resolution he urges them utilise his music and ‘turn their guns to a fist’. Did we mention Tyler’s a lyrical genius? No? Well he is.

So, those are our favourite twenty one pilots lyrics. Let us know yours via Twitter or Facebook.