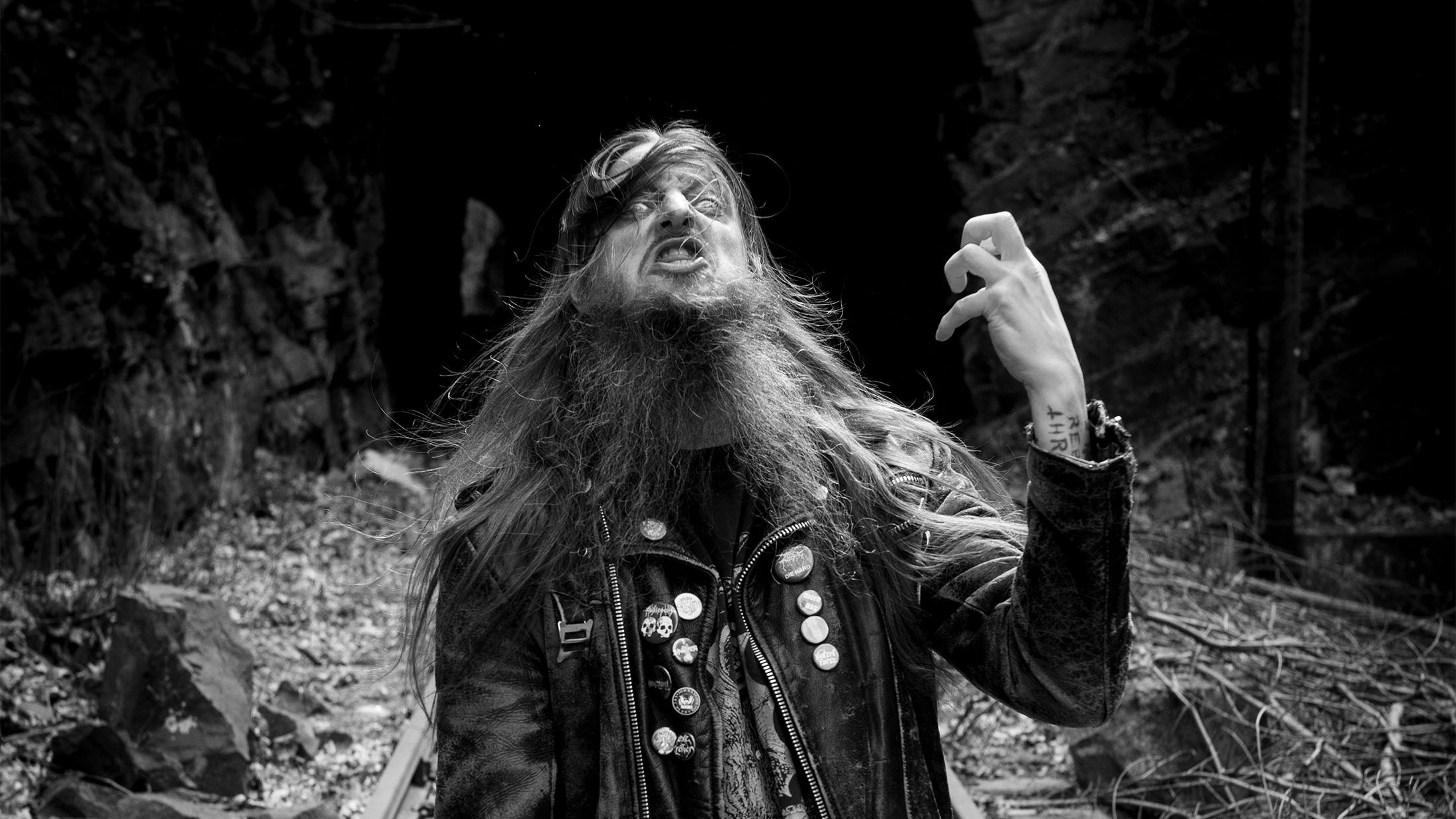 Twenty-two years later, this looks nuts. Darkthrone have become The Grateful Dead of Norwegian black metal’s second wave, with a catalogue that’s as definitive of what such music can be, as well as completely iconoclastic. Often at the same time.

Fenriz himself has become an icon in his own right: drummer, underground metal cheerleader, forest enthusiast, accidental politician, and loveably-memeable figure. All of this while Darkthrone continue to uphold their name as perhaps black metal’s most enduring band with a consistent and seemingly constant flow of albums.

As number 19, Eternal Hails, arrives – this time adding doomy riffs and lengthy songs to their palette – it’s truly, as the meme goes, a great Friday. And to celebrate, we look back at the greatest moments of one of metal’s most intriguing characters…

In their very earliest days, Darkthrone were death metal, more in tune with American bands like Autopsy, Morbid Angel and Death than what would follow. Heading to neighbouring Sweden to record at Sunlight Studios – which would become something of a European home for death metal in the same way Florida’s Morrisound had – their Soulside Journey debut from 1990 is a winding, technical beast. Fenriz in particular showed himself to be a formidable talent – able to navigate the technicality of the songs with a Bill Ward-ish liquidity and flow.

…And then came Darkthrone’s second album, 1992’s A Blaze In The Northern Sky, which was so different from their debut that their label, Yorkshire’s Peaceville Records, asked them what the hell was going on when they delivered the tapes. “They called me up and said, ‘What the fuck is this?’” recalled Fenriz years later. “I said, ‘That’s fucking black metal, man.’” In fairness, they were right to be surprised. Harsh, primitive and feral, with a scything, icy production that was night and day next to the thickness of its predecessor, it’s a very different band rebelling against the conformity of the death metal scene which had, in their view, become about politics and “voting”. “There are still death metal parts,” said Fenriz, “So I had to drum extra hard to crush them.” It may have been a shock, but Blaze… was also the first bona fide True Norwegian Black Metal album, and songs like Kathaarian Life Code and In The Shadow Of The Horns have become part of the ground on which the black metal that followed stands.

Having recorded Soulside Journey, A Blaze In The Northern Sky, Under A Funeral Moon and Goatlord in more professional facilities, becoming ever more necro and against the normal way you’d record a band, for 1994’s Transilvanian Hunger, Darkthrone started their own studio: Necrohell. And, by ‘started a studio’ we mean, ‘used a four-track recorder in Fenriz’s flat’. It was on this that they would also record Panzerfaust. Eventually it became “too necro” according to Fenriz, and after returning to a more normal studio for several years, they went back to DIY with… Necrohell II. For a decade and a half from 2006’s The Cult Is Alive until 2019’s Old Star, this eight-track machine in a bunker captured all of Darkthrone’s music, until that also became too necro and the band moved to a more proper facility for Eternal Hails. It has dampened their raw spirit not one bit.

Not playing at the band’s greatest live triumph

When Satyricon headlined Germany’s Wacken festival in 2004, it was a special occasion. As the first Norwegian black metal band to do such a thing, they wanted to do something extra special. So, they announced that Darkthrone would be joining them. So it was that after their own set, flanked by two burning inverted crosses, DT frontman Nocturno Culto howled Transilvanian Hunger, Under A Funeral Moon, Kathaarian Life Code and The Hordes Of Nebulah into the night sky. Fenriz wasn’t there, however; rumour being he was happy about the event so long as he didn’t have to take part. So against the idea is he, Darkthrone have only played a handful of shows in over three decades, most of them very early on, the last being a one-off in 1996. “I could be a rich bitch if I played live,” he shrugged a couple of years later. Truly incorruptible.

The best interview of all time

This is amazing. It’s Fenriz in his Oslo flat in the middle of the night, piss drunk, giving some of the best quotes any musician has ever given. Revealing that he’s recently had a preference for “thrash metal bands with boring riffs but great vocalists”, he also explains the importance of big sunglasses (“Big sunglasses – cool band”), how Nocturno Culto has the same work mindset as Elvis Presley, and how Darkthrone were using a heavy Motörhead influence since almost the beginning (“The important thing for Motörhead for me is that I am ‘Filthy’ Animal Taylor”). Also, his flat is exactly what you want it to be. For some reason, there’s an electronic football game on his coffee table, and he almost knocks over a clothes dryer in his exuberance. It also introduced us to the brilliant punk-metal of Adrenaline OD when he puts on their song Rock And Roll Gas Station and delivers the greatest sing-along in human history.

Fenriz once told K! that he’s “in competition with John Peel to listen to the most music – whoever listens to the most music wins!” Like the late Radio 1 DJ who introduced listeners to Napalm Death, Carcass and Bolt Thrower (as well as American hip-hop and techno before anyone else was playing it), Fenriz is a very good source of new music. Whether through the Fenriz Presents… The Best Of Old School Black Metal compilation from 2004, his Radio Fenriz channel on Soundcloud, his Spotify playlists, or simply dropping band names whenever he talks, you should take note. And whether what you end up with is raw death metal (Vorum) or German techno (Monika Kruse), you know you’ll be getting the good stuff.

Though Darkthrone’s sound is far-reaching for one so wilfully primitive, it’s also got a core to it. To wit: some of Fenriz’ ideas are Darkthrone, some aren’t. Enter his side-projects. Most famous of these is Isengard, a folkier but still raw black metal proposition in which he plays everything himself, and whose Vinterskugge compilation has become an essential Norwegian Black Metal document, even if its author admits, “I don’t understand why people like it so much.” Then there’s Fenriz’s Red Planet, a project rooted in his love for traditional doom metal bands like Trouble and Saint Vitus, it’s good stuff, even if he can’t carry a tune in a bucket. Most off-piste of all, though, is Neptune Towers, a synth project in which he channels the spirit of artists like Tangerine Dream and Klaus Schulze. And all this music was just the stuff he’s knocked out for a laugh.

Over the past 15 years or so, there’s been a Millets vibe coming into Darkthrone. Crushed velvet shirts and corpsepaint? Out. Here’s what’s in: walking boots, forest trekking, camping and writing a raucous love letter to it all in the form of Hiking Metal Punks, from 2008’s Dark Thrones And Black Flags. You only have to Google to find pictures of Fenriz in a tent or giving it large on top of a mountain, and it’s incredibly nice to see a band getting so much fresh air.

In 2016, Fenriz put himself forward as a backup candidate representing the borough in which he lives on the city council. Despite this often being a formality to make up numbers in order that the council can run, and despite running a campaign featuring a picture of himself with his cat, Peanut Butter, with the words ‘Don’t Vote For Me’, people voted for him. And so, Fenriz ended up in the world of local politics.

Fenriz once described Darkthrone as being like a restaurant. Nocturno Culto is the traditional bit of the menu, with a bit of discipline, but in this, the drummer puts all sorts of spins on things. Thus, Darkthrone’s discography – now 19 albums long – is a thing that’s always the same because it’s always different. And by leaning in these different directions – pure black metal, punk, NWOBHM worship, doom – they remain the most interesting and consistent of their contemporaries in black metal’s second wave.

The Evolution Of Darkthrone, In The Words Of Fenriz

Black metal pioneer Fenriz looks at the changing phases of Darkthrone over their 33-year career.