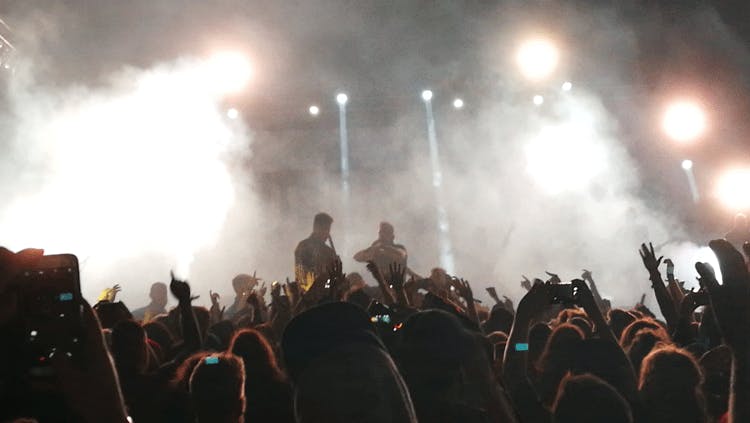 Burgers. Beer. Bruises. Unless you’ve ended up with each of the three Bs at some point over the weekend, you can’t say you’ve really been to Download Festival. We at Kerrang! – in the interest of real, investigative journalism, of course – checked them all off a few times over. Writing-up with some pretty gnarly cartilage damage, black marks separating the scratches right across our torsos and what might actually be a fractured forearm just from fending off the human cannonballs at Slayer, we thought we’d (100% scientifically) rank our 11 (it’s one more than ten, innit?) favourite beatdowns from an absolutely riotous three days. Think we’re off the mark? We’ll see you in the pit! (…or the comments below! – Pacifist Ed)

11. SUICIDAL TENDENCIES
Venice, CA’s crossover kings have seen a thousand mosh-pits in their time. And, to paraphrase Bon Jovi, they’ve crocked them all. The battle-hardened crowd have too much beer-belly low-centre-of-gravity to knock down that easily, though, so this is as much about swinging-paunch as crunching-punch.

10. PROPHETS OF RAGE
Prophets Of Rage have a lot to live up to – not just in the political-rap-rock stakes, but also in the time-honoured tradition of audience members sending each other to the first aid tent, too. There’s a lot of energy as the sun drops on Friday evening, but – compared, say, to the absolute mayhem of Reading & Leeds 2000 – people seem to be holding back. Room for improvement.

9. SYSTEM OF A DOWN
‘WHY’D YOU LEAVE THE KEYS UP ON THE TABLE?!’ comes the immortal question on Friday night. “JUST BECAUSE WE’RE SUFFERING FROM CONCUSSION!” could be the answer. The Armenian-American lunatics lose points because it’d be really hard to find a way to hit someone to the sound of Satellites.

8. FIVE FINGER DEATH PUNCH
Ivan Moody looks exactly like the sort of unhinged fist-flinger who loves nothing better than going headfirst the wrong way round a circle-pit. And his bandmates look like that guy’s almost-as-hard mates. Their live presence absolutely lives up to aesthetic-informed expectation, too, meaning that the dudes spilling out with black eyes and bust noses are top of the queue of those calling for FFDP to be a future Donington headliner.

7. DEVILDRIVER
Possibly due to the amphitheatre-curve on the second-stage standing area, the undisputed champions of the Download circle-pit mightn’t quite be able to revisit the hurricane-sized madness of their greatest showings on the hallowed turf. (YouTube their set in 2006, srsly!) Nevertheless, Clouds Over California and Meet The Wretched have lost none of their serrated edge and still get pretty much everybody in front of the safety-barrier smashing about in a giant circle.

6. SIKTH
In fairness, the Watford prog-metallers’ crowd is a little too sparse, and far too unfamiliar with their new material, to justify making it this far up the list. But we couldn’t resist chucking them in at #6. Credit is due to the renegade hardcore absolutely kicking-off when original vocalist Justin Hill jumps onstage to help them smash through a neck-wrecking Bland Street Bloom.

5. EXODUS
How the hell did the Bay Area Thrash icons end up tucked away on the fourth stage on Friday night?! And why the f*ck wasn’t it full to bursting?! Those are the questions being asked by the Toxic Waltzers spilling out at the end of a pretty monumental set. We’re thinking that everyone but the-hardest-of-the-hard were simply too terrified to risk their wellbeing that early in the weekend.

4. MAX & IGGOR CAVALERA RETURN TO ROOTS
“Well, it’s not exactly Sepultura!” grumps one grey-looking punter as the Cavalera brothers emerge for a truncated run-through of their 1996 classic LP. He’s probably the only one complaining. Parts of that record were recorded with primitive tribes deep in the Brazilian rainforest, but held up against the bouncing, red-mist primitivism – like a football riot at a trampoline park – of pretty much everyone in attendance today, those lads look positively civilised.

3. EVERY TIME I DIE
There’s a 6’8” bloke with a name-badge reading ‘PIT TROLL’ standing down the front for the New York metalcore masters. And he’s chucking absolutely anyone who’ll make eye contact over the top. There are also an inordinate number of punters sipping Prosecco (renamed ‘Brosecco’ for the occasion) from the van parked right outside. It’s really saying something that – given their Black Heart London show on Sunday – that this might not be the most mental ETID set of the weekend…
(Note: Pit Troll is actually a lovely Scottish bloke called Ross who’s got a Facebook for his pit-dwelling alter-ego. Give him a like!)

2. SLAYER
“F*CKING SLAAAYEUUURGH” screams one portly punter down the front as the most evil outfit in thrash step onstage. He’s promptly cut short by an elbow to the skull. An absolutely enormous attendance, filling just about all available space within eyeshot of the second stage, means that the crowd of proud parents with toddlers-on-shoulders, battle-scarred-but-retired veterans and utterly horrified passers-by is actually bigger than that of the front-row wrecking crew. But with Mandatory Suicide, Angel Of Death and Raining Blood fighting for setlist space alongside bone-cracking newbies like Repentless, the elder statesmen still manage almost the craziest scenes of the weekend…

1. THE DILLINGER ESCAPE PLAN
“THIS FEELS LIKE NEVER ENDING!” screams Greg Puciato amidst Dillinger’s last-ever UK show. To the contrary, tonight’s set – like the mathcore masters’ career – disappears in a frenetic blur. Both Greg (“Let me f*cking go,” he roars at security, “I want to be amongst the people!”) and guitarist Ben Weinman end up on the ground, orchestrating the chaos. Several punters are in tears, openly overwhelmed by the sheer intensity. We’re pretty sure we even spotted one guy being carried into the maelstrom upside-down at one point. Business as usual, then, from the absolute best.