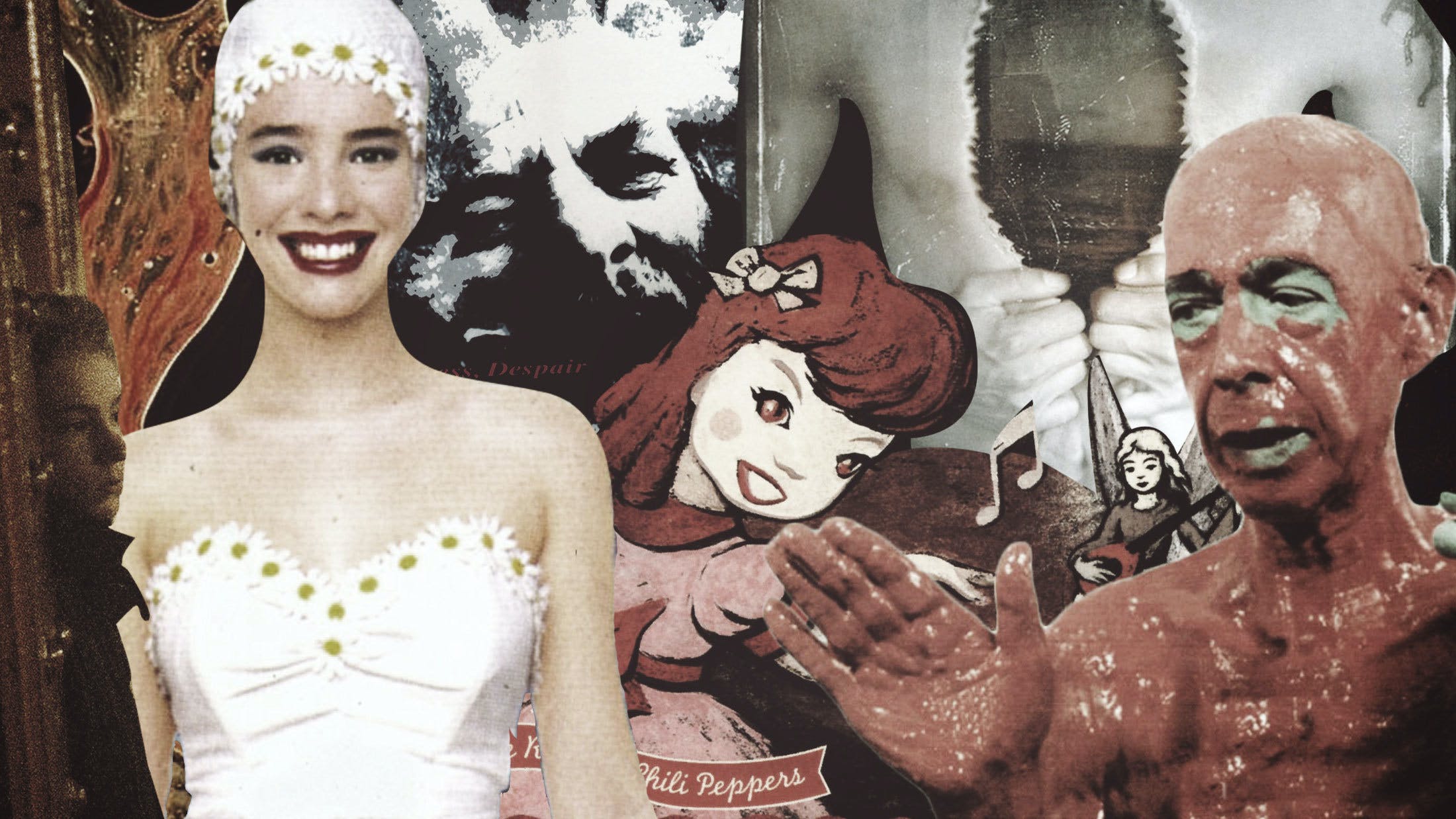 That the music industry is not an entirely fair and equitable environment shouldn’t come as a massive surprise to anyone. That old adage about cream rising to the top is nonsense: the musical landscape is littered with the decomposing corpses of artists of who never got their due rewards, and the detritus of classic albums dismissed or ignored at the time of their original release. As Les McQueen, the former rhythm guitarist of Royston Vasey superstars-in-waiting Crème Brulee, once poignantly observed, it can be “a shit business.” Hindsight, however, offers an opportunity to right some historical wrongs and pay overdue respect to artists and albums denied a fair hearing back in the day. Here, then, are a dozen underrated ’90s albums which most merit reappraisal…

An obvious starting point, sure, but older readers won’t easily forget the opprobrium heaped upon Metallica’s sixth studio album long before anyone had heard a note of it. Peripheral details – Haircuts! Eyeliner! Bon Jovi’s producer! – were interpreted as conclusive proof that Metallica were intent upon ‘selling out’, with, ironically, some of the loudest complaints coming from new ‘family’ members who hadn’t been aware of the quartet’s existence pre-Enter Sandman. The debut of Metallica’s new bluesy, ‘greasy’ sound – drawing influence from classic rock acts such as Thin Lizzy, Aerosmith and Lynyrd Skynyrd – certainly took some adjusting to, but the passing of time has enshrined the likes of Until It Sleeps, Hero Of The Day, Bleeding Me and the magnificent The Outlaw Torn as among the band’s finest-ever compositions. Post-St. Anger and Lulu, the outrage seems rather quaint.

On paper, the recruitment of Jane’s Addiction guitarist Dave Navarro to replace the troubled John Frusciante post-Blood Sugar Sex Magik looked like a master stroke for the Red Hot Chili Peppers, but the ‘feel-good’ factor swiftly dissipated in the wake of the release of One Hot Minute. Darker, heavier and more intense than its predecessor, with lyrics dealing with addiction, depression and death, One Hot Minute was no party album, and Navarro’s disdain for the frat boy/jock element of the LA band’s audience was never disguised. His exit from the group in 1998 surprised absolutely no-one, and when John Frusciante returned for the phenomenal Californication, many fans chose to view the Navarro-era as an unfortunate misstep. In truth though, while OHM never threatened to eclipse BSSM in commercial terms, it stands up as one of the Peppers’ most complete albums, with My Friends, Aeroplane, Warped and Transcending the finest examples of the gravitas Navarro brought to the group’s songwriting.

How On The Turn didn’t make superstars of Kilkenny’s Kerbdog is an enduring mystery. Boasting three superb singles (JJ’s Song, Sally and Mexican Wave), fistfuls of killer riffs and genuine personality, the band’s second album – a perfect blend of alt.metal and alt. rock – should have been huge. Truthfully, Kerrang! must shoulder some of the blame, damning the album with faint praise in a lukewarm KKK review upon release, but the speed with which Mercury abandoned the band was both shameful and short-sighted. In latter years, Biffy Clyro, Frank Turner and Jamie Lenman have paid tribute to the album’s enduring quality, but On The Turn deserves much more than cult status.

Portland’s Everclear broke into the mainstream with 1997’s So Much For The Afterglow, but the real gem in their catalogue remains their gritty debut, recorded in a friend’s basement for just $400. Life had dealt frontman Art Alexakis some really shitty hands growing up and every ounce of the singer’s pain, frustration and rage shines through on these raw, feral recordings, his nihilistic outlook encapsulated in the key lyric 'I am sick inside and tired of my life.' Brighter days lay ahead, but Art’s cathartic outpourings here make Everclear’s debut truly compelling.

There are no weak points in Fugazi’s stellar catalogue, but sandwiched between fan favourites Repeater (1990) and In On The Kill Taker (1993), Steady Diet… has never been given due recognition. In truth, the album had a difficult birth: “We were feeling fucking fried,” admitted Guy Picciotto, "and we were making a record at a time when we should have been taking a break." That tension bled into the recording. The band's most experimental and explicitly political album to this point, Steady Diet… cast unforgiving eyes over George Bush's America and offered a caustic dissection of a nation at war both internally and beyond its borders, while reasserting the band’s fierce activist streak. “We will not be beaten down," sang Ian MacKaye defiantly on KYEO, an acronym for Keep Your Eyes Open. Released in July 1991, the album’s impact was somewhat lost as the phenomenal global success of Nirvana’s Nevermind pushed ‘alternative’ rock overground, but in 2019 its stark messages urging vigilance against the creeping erosion of human rights sound more vital than ever.

Tripping Daisy – I Am An Electric Firecracker (1995)

As far as many rock historians are concerned, Tripping Daisy are most significant for being the band which spawned The Polyphonic Spree, but this does the Dallas quartet a huge disservice. Dig deeper and I Am An Electric Firecracker emerges as one of the decade’s great post-grunge, neo-psychedelic albums… a somewhat niche subgenre, admittedly. Arguably best known for its quirky minor radio hit I Got A Girl, the Texan quartet’s major label debut occupies the sonic hinterlands between Jane’s Addiction and The Flaming Lips, with the likes of Piranha, Trip Along and the expansive Prick being the finest examples of the sparkling chemistry between frontman Tom DeLaughter and guitarist Wes Berggren. Trust us, it’s a gem.

New York noise rock supergroup Handsome may have made just one album, but it’s a doozy, one of the scene’s true ‘lost’ treasures. Founded by former Helmet guitarist Peter Mengede and ex-Quicksand axeman Tom Capone, the band’s pedigree was undeniable, and in vocalist Jeremy Chatelain, Handsome could boast a frontman with an emotional range to rival the very best rock singers of the decade. Produced by Terry Date (Pantera/Soundgarden/Deftones), the band’s self-titled album sounded huge, with the surging Dim The Lights, lead single Needles and the tense, plaintive Quiet Liar highlights among the highlights. If the likes of Helmet, Far or Rival Sons ever meant anything to you, you owe it to yourself to seek this out immediately.

In a 2017 interview with Decibel magazine, Napalm Death’s Shane Embury singled out Fear, Emptiness, Despair as his least favourite ND album, recalling fractures in his relationship with vocalist Barney Greenway colouring the recording sessions. But history has been kind to the Brummie grindcore pioneers’ fifth album. It might lack the groundbreaking visceral charge of Scum or From Enslavement To Obliteration, but in slowing down and adding industrial influences, Fear, Emptiness, Despair showed Napalm’s desire to evolve and expand their sonic arsenal, without sacrificing their fire and fury. Few Napalm albums sound as oppressive and weighty, and in an era when metal artists were being crushed by grunge, this served notice that Britain’s most intense band would not be tamed.

Assessed in purely commercial terms, STP’s third album could be viewed as a poor relation to their hugely-successful Core and Plush sets. On an artistic level, however, it’s the San Diegan band’s masterpiece, a collection which smashed preconceptions, and put paid to the quartet’s unwanted reputation as grunge arrivistes. Taking influence from David Bowie and The Beatles rather than grunge touchstones Sabbath and Zeppelin, Tiny Music… gleefully torched the band’s past, and displayed a joie de vivre and playfulness few saw coming. From the irresistible vintage Stones vibe of Big Bang Baby through to the Bossa Nova-flavoured And So I Know and on to the darkly beautiful, jazzy Adhesive – featuring Scott Weiland’s chillingly prophetic lyric 'Sell more records if I’m dead' – there isn’t a weak moment here. STP’s unwanted ‘Stone Temple Plagiarists’ nickname died here.

By the time Burning Tree frontman Marc Ford accepted a 1991 offer to join The Black Crowes, rejecting an overture from Slash to sub for Izzy Stradlin on a GN’R tour, his band were already dead in the water, with the guitarist working in a record shop to pay his bills. They deserved better, for Burning Tree’s self-titled debut album is just wonderful; a gloriously out-of-time Cream/Jimi Hendrix/Rory Gallagher tribute which could have reignited classic rock for a new generation. If Ford’s current band, The Magpie Salute, are to your taste, do yourself a favour and immerse yourself in his early work, with Baker’s Song, Mistreated Lover and Crush among the sublime highlights of this utterly charming lost classic.

With nu-metal coming to the fore in the mid-’90s, Floodgate’s debut album – featuring the kind of doomy, sludgy, Southern rock-influenced groove-metal for which Down, Corrosion Of Conformity and Crowbar would receive plaudits – emerged to precious little fanfare. Listening afresh in 2019, it’s hard to understand why the New Orleans bruisers were overlooked. Frontman Kyle Thomas (now reinstalled in his first band, Louisiana thrashers Exhorder), is a magnetic presence at the album’s core, his anguished lyrics bringing a harrowing intensity to songs such as Shivering and Those Days, while herculean album closer Black With Sin is as compelling as any metal song to have slithered out of the NOLA swamps. A perfect soundtrack to dark days.

Ignored in their native land, San Diego’s The God Machine wound up chasing their rock'n'roll dreams in London, taking up residence in a Camden squat and honing their craft alongside the likes of Silverfish and Skyscraper. Their luck didn’t improve much: despite press acclaim for their debut album, 1993’s Scenes From The Second Storey, the band remained resolutely underground, and their fate was sealed when bassist Jimmy Fernandez died from a brain hemorrhage during sessions for this, their second album, released after his passing. It’s a rich, if often uncomfortably bleak, epitaph, occupying sonic territory between Jane’s Addiction, Nick Cave and Nine Inch Nails at their most introspective. 'You said life would be painless,' sings frontman Robin Proper-Sheppard on album highlight Painless. 'I’m sorry, that’s not what I’ve found.' No shit.