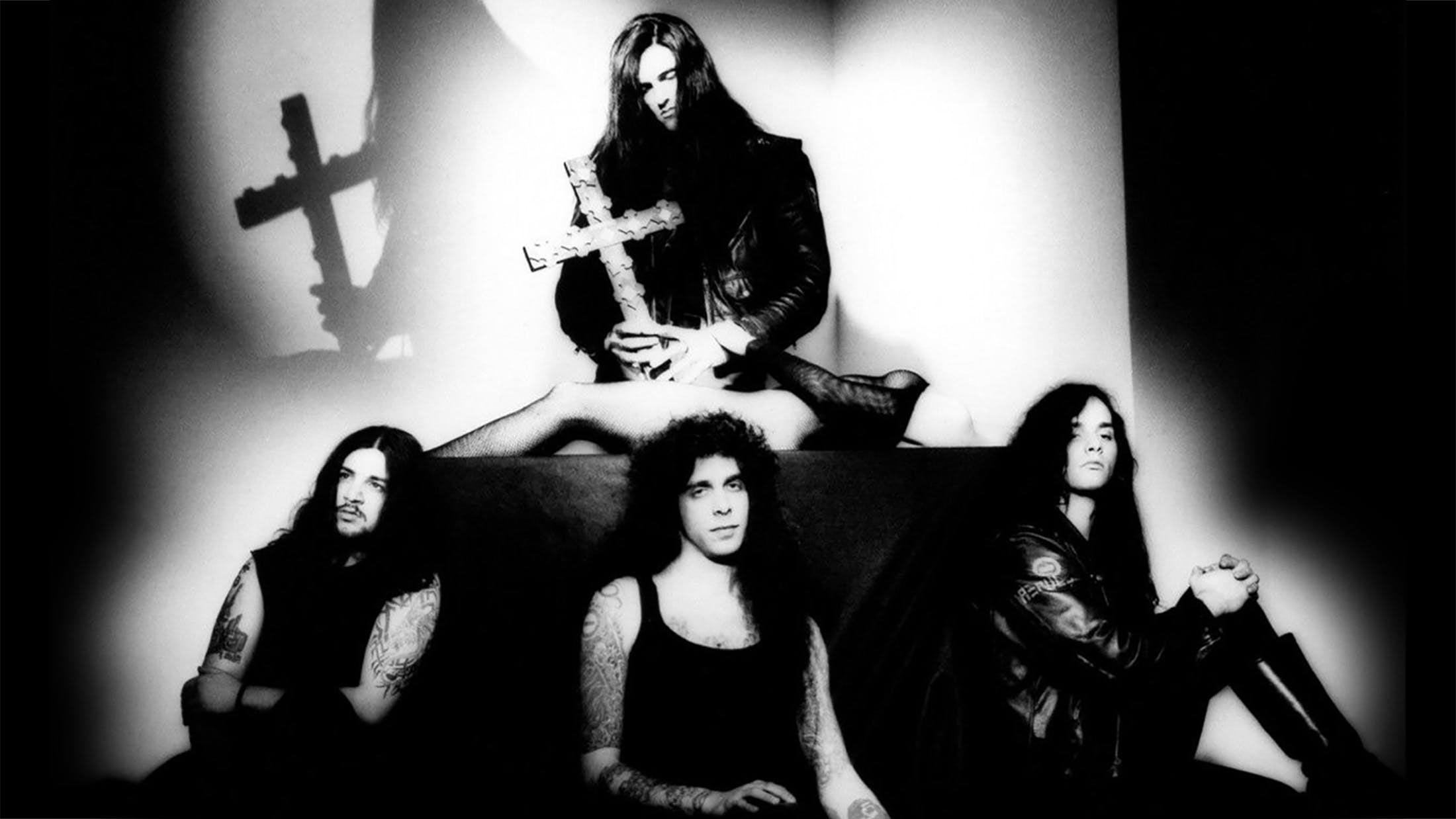 Having named their 2000 greatest hits collection The Least Worst Of Type O Negative in typical sardonic and self-effacing style, we’re hesitant to call this walk through their iconic back-catalogue a 'best of' as such, but, let’s be honest: they released a slew of killer epic albums before a heart attack took the life of frontman Peter Steele in April 2010. Plus, it’s actually difficult to select just 13 songs to fill such a list…

Anyway, for our money, this lot is as close to nailing it as we can probably get – starting with the shortest and working through to the longest. After all, this is a band who were rarely ‘brief’.

Over the course of their career, Peter Steele made so many allusions to his own premature demise it’s redundant to cite the irony of his eventual fate, but the opening title-track of their final album is something of a doozy. After a pleasingly sludgy, gothic start it morphs into something far more Ramones than Black Sabbath, capturing the self-proclaimed Drab Four at their punkiest, romping through just over four minutes of high-octane hooky hardcore. Its ‘I can’t believe I died last night / Oh God, I’m dead again’ refrain is also perhaps the catchiest in their repertoire.

Perhaps Type O’s signature song, Black No.1 – the title a reference to the shade of hair dye best loved by the gothic legions – is perhaps their only one improved by being hacked down to a more digestible size. The single shedding nearly seven minutes from its running time, it becomes a virtual pop song without losing anything that makes it such a gloomily rousing beast in the process. Between its slowly coiling bassline, massive chorus and brief diversion into The Addams Family theme tune, it has everything you could want and more from a song.

There are many great covers in the band’s arsenal – their deconstructed take on Sabbath’s Paranoid a strong contender for this list – but perhaps none received the full on Type O treatment more entertainingly than Bloody Kisses’ Summer Breeze. Listen to the Isley Brothers classic first: sounding like it should be on every playlist in Ron Burgundy’s collection, it placidly beseeches you to bask in its lazy, sunny-day warmth. Then throw on this version and realise that said ‘breeze’ has blown through a rubbish dump and/or graveyard at some juncture, yet still puts a smile on your face regardless.

I Don’t Wanna Be Me

Probably the finest of all the fast-paced songs in their arsenal, I Don’t Wanna Be Me kicks off 2003 album Life Is Killing Me and is a highly-energised, sarcastic paean to self-hatred, waving a middle finger in their own faces as much as anyone else’s. Like Dead Again, the influence of old-school catchy punk rock bleeds from every pore. At times, it even recalls the glorious heads-down thrash attack of Peter’s previous band, the controversial Carnivore, and incites the desire to wildly leap around, which is not an impulse that was felt often at Type O shows.

For their second release, the black-hearted Brooklynites decided to go down the live album route. Except they didn’t, for The Origin Of The Feces is in fact a faux live album, cooked up entirely in the studio, including all the supposed ‘crowd interaction’. Comprised mostly of tracks that appeared on their debut, it also features a sludgy cover of Hey Joe – made most famous by Jimi Hendrix – with retooled lyrics. Changing, ‘Hey Joe – where you going with that gun in your hand?’ for, ‘Hey Peter – where you going with that axe in your hand?’ really is Type O all over.

Life Is Killing Me

Despite a title mired in gloom, the album Life Is Killing Me is actually less depressing than its predecessor, both musically and thematically. The title-track, however, while soaringly anthemic and deeply catchy, has little room for anything vaguely light or cheery when it comes to its lyrics. Infuriated with the medical establishment following the passing of his mother, Peter takes them to task, rattling off slights such as dismissively referring to surgeons as ‘overpaid meat magicians’ with the perfect level of potent disdain. Makes you wonder what he would have made of the NHS…

October Rust is arguably the most romantic/randy (and best) album Type O Negative dropped, and Wolf Moon – a live staple – is an absolute highlight. It is also one of the only songs you’re likely to encounter that is allegedly about the pleasures of performing a certain sexual act at a certain time of the month. Whether or not this is true, there’s no denying the breathy beauty of the whole thing and the yearning captured in the lyrics, and by the time Peter’s climactically howling at the moon over one of keyboardist Josh Silver’s finest moments you will have been moved.

Love You To Death

That echoing piano… That croon… That shuffling beat… That refrain… Love You To Death is as romantic as it is sexy – and goth-as-fuck to boot. As straightforward a love song as you’re likely to find in the band’s somewhat warped canon, it kicks off October Rust – well, after two tracks of smart-arse pissing about included just to annoy listeners – in glorious fashion, and sets the standard for everything that follows. Released as an abridged single, it drew a lot more fans into the Type O fold, but the full-length version is where it’s at.

In Praise Of Bacchus

In Greek mythology Bacchus was the god of agriculture, wine and fertility – and it’s safe to assume that it’s not his influence on the farming of wheat and lettuce Type O Negative are praising. Featuring the only guest appearance on October Rust, Val Ium of Staten Island bruisers Pist*On lovingly winds her vocal cords around the song’s climactic passages, adding some sugar and silk while Peter explores the lowest lows of his booming baritone. Though never released as a single it remained a live staple almost constantly throughout the band’s career.

As bleak as Type O’s worldview was for the first 10 years of their career, by the time they reached World Coming Down things were very dark indeed. The fact that it contains songs titled Everyone I Love Is Dead and Everything Dies makes this very clear, with the latter the true standout. Taking the time to tick off everyone he knows who has to that point kicked the proverbial bucket during the lilting piano verses, the manner in which Peter caterwauls that, yes, everything dies is almost celebratory in tone come the chorus, and somehow works so well.

With its funereal organ and dragged-through-molasses tempo, White Slavery opens World Coming Down in truly miserable fashion. With a title and theme inspired by cocaine addiction rather than any kind of political/social commentary, it’s a truly bleak but endlessly compelling dirge that packs a killer howling guitar solo. The album, in fact, deals with addiction in many incarnations, with brief non-musical interludes titled Liver, Sinus, and Lung alluding to the toxins ingested by various members of the band, and their potential for killing them. Fun!

Technically three distinct songs in one, with the first part released as a single, early CD players actually allowed you to skip sections. Never averse to courting controversy and/or deliberately pissing people off, the video that none-too-subtly alludes to a devout Christian girl pleasuring herself in a distinctly blasphemous manner put Type O on the radar of a great deal of those who would fall in love – or hate – with them. It also helped Bloody Kisses become the first album on Roadrunner Records to achieve both Gold and Platinum certification.

Unsuccessfully Coping With The Natural Beauty Of Infidelity

The opening track on Type O Negative’s debut album is nearly the longest song in their entire canon, clocking in at over 12-and-a-half minutes. The faux live version on Origin Of The Feces – cunningly retitled I Know You’re Fucking Someone Else – is three minutes longer thanks to ‘crowd interaction’, but this is the version that counts. Progressing through numerous phases both up tempo and dirt-slow, it evokes the works of a number of bands – The Doors, Motörhead, and of course Sabbath – as it unwinds, but at no point seeming overlong or overwrought.

The Pete Steele I knew: A dry-witted giant who played the media at their own game