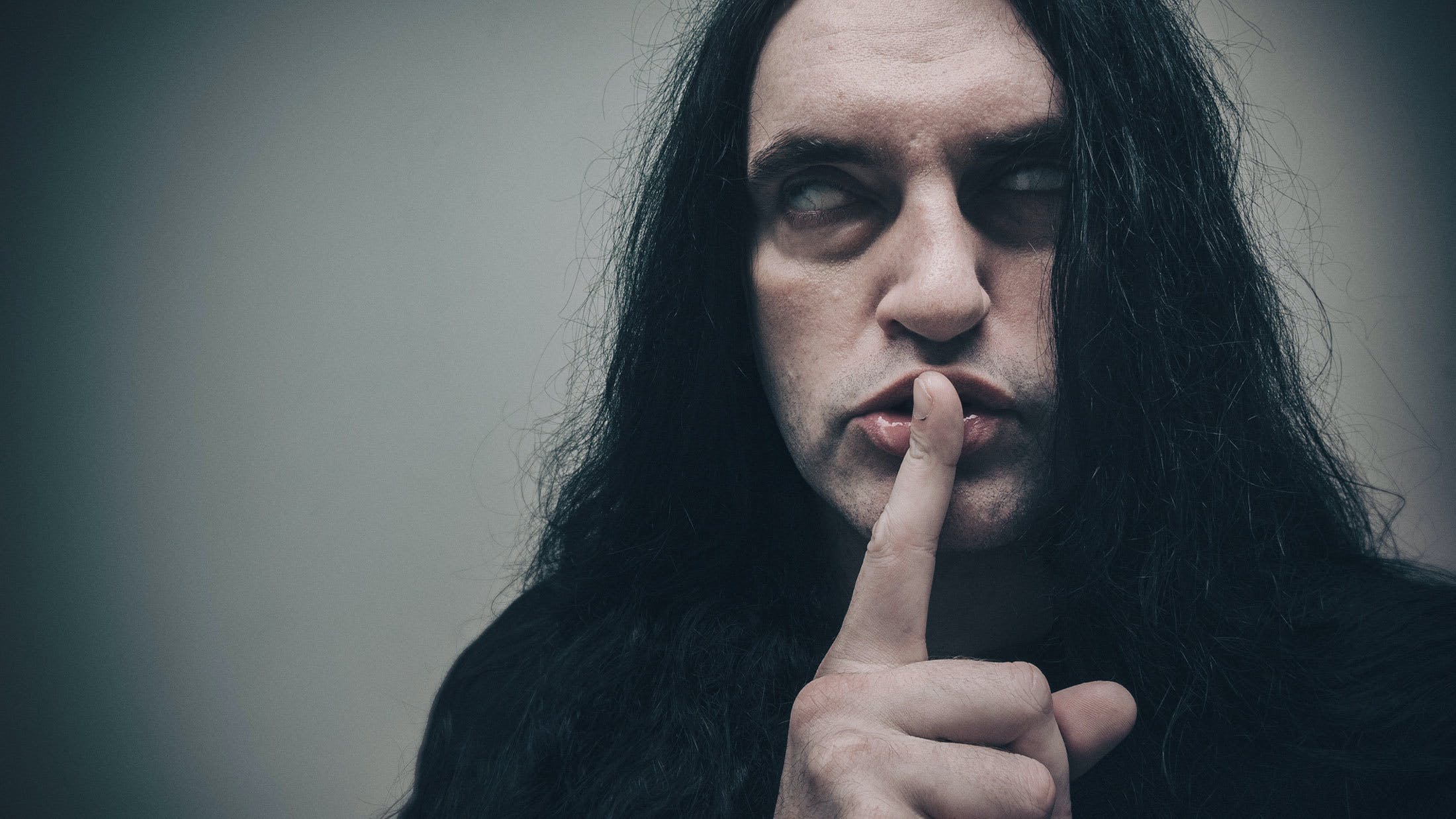 A seated Peter Steele slapped one of his steel-girder thighs and trained his intense gaze upon me. “Hello sonny,” he boomed. “Come sit on my knee.”

I like to think Pete didn’t just say this to all the journalists, although he may have played me for a fool. In any case, I opted for the more traditional approach of sitting in a chair beside him. Disappointing, I know…

On that particular day in the mid-’90s, we were in a Portakabin, backstage at some Dutch festival. I had interviewed Pete several times before, and I always looked forward to doing so again. When you sat down to quiz the Type O Negative leader, you were delving as far as you could into the depths of a fascinating and absorbing character.

The first time I met Peter Steele, he visited the Kerrang! office by himself. This would have been 1991, back when his band Type O Negative’s debut album Slow, Deep And Hard was attracting little more than a minor cult following. While that record had its moments, lyrically it dealt with a grown man raging about a broken romance. Sonically, it occupied the awkward halfway-house between Pete’s controversial hardcore past in crossover merchants Carnivore and the kind of Sabbath-infused goth majesty that he would come to embrace. In many respects, it was the sound of a man trying to find himself.

Pete was on a charm offensive that day in the K! office. Contrary to what some might expect, his brand of charm involved neither lovable arrogance nor oily platitudes. He was distinctly humble, perhaps thanks in part to having spent seven years as a New York City park worker (an experience he always said kept him grounded), coupled with more than a pinch of self-loathing. Maybe he really was, as he would later claim, even a touch shy.

Sporting his uniform of green army cap, vest and boots, he seemed open and honest. More than anything, though, he was funny. The fact that he was a six-foot-six Russian/Icelandic warrior with a naturally serious face, and who looked like he could disembowel you on a whim, made his comically deadpan lines all the more devastatingly effective. These solemn proclamations would be followed, a few seconds later, by a comically ironic eyebrow raise and the ghost of a smile. During one conversation, we chuckled about how Type O interviews and records alike might benefit from the addition of an irony bell, which tolled to signify a sarcastic remark.

While Peter Steele’s sense of humour was one of the greatest things about him, it also got him into trouble. Sometimes, this would be because a journalist would report his deadpan proclamation, but omit that crucial raised eyebrow or that knowing half-smile. Other times, though, this would be because Pete had simply said something stupid.

The Carnivore days and the Slow, Deep And Hard phase, which Pete came to see as “a bit immature” and the products of masculine insecurity, left him saddled in some quarters with a reputation for bigotry, which made him feel both angry with the press and regretful for having been careless about how he presented himself to the world.

While the giant frontman’s super-dry, black humour infected his music and especially the lyrics, he initially used sarcasm and shock value as twin shields – a way of masking the insecurity he felt about his art. When we look back at Type O Negative’s first three albums, we notice that Slow, Deep And Hard’s outlandish song titles like Gravitational Constant: G = 6.67 × 10−8 cm−3 gm−1 sec−2 gave way to more sincere titles on 1993’s Bloody Kisses, the breakthrough platinum-seller that made rock fans genuinely sit up and pay attention to the man, his band, and his work.

By the time 1996’s breakthrough record October Rust arrived, the album’s evocative title alone suggested that Pete now felt less inclined to deliver his art with an ironic wink. Sure, the most commercial track My Girlfriend’s Girlfriend was playful, but shimmering epics like Be My Druidess, Burnt Flowers Fallen and Red Water (Christmas Mourning) confirmed, once and for all, that Pete had moved beyond his need for self-deprecating humour. Once he and his bandmates decided to jettison the hardcore-style mob-chant choruses of his Carnivore days, his true artistic self was free to thrive. His rich baritone voice, for instance, could now ooze the kind of vampiric sexuality and dark romance that wouldn’t have gone down so well in the kind of NYC clubs he used to play.

April 14, 2020. I search through hundreds of my old interview cassettes to find recordings of Pete, then push one into a ghetto blaster. As the reels whir into action, I’m transported back through time to my 1996 visit to Brookyn’s Systems Two studio, during the recording of October Rust.

Pete’s voice makes the speakers tremor. Aged 34, he’s revisiting his childhood, and telling me about his five older sisters (“I’m like a man sandwich – a piece of meat, stuck between all this oestrogen”) and how he used to be “the little brother from Hell”. Obsessed with monsters at a young age, he would “hide under a bed for five hours, just so I could grab one of their ankles as they passed by. Why? Because I craved attention. I got the impression my parents really didn’t wanna be bothered so much. I don’t blame them, and I don’t want pity, but I did feel like I became a burden to them.

“Now I’ve got people’s attention,” he says, minutes later, “some of which is unwanted, I can finally be myself, I guess. I can write songs that really mean something to me, rather than screaming ‘God is dead’ for 20 minutes onstage.”

Song by song, album by album, we watched Peter Steele unveil more and more of his real personality. When speaking to the press, his humility often prevented him from waxing overly lyrical about his art. On the 1996 Brooklyn tape, he wryly describes much of October Rust as, “very drawn-out, repeating parts endlessly, moaning women, over-produced, the typical Type O Negative style.” And certainly, there were plenty of other sensation-worthy distractions for us hacks to document, such as his attempted suicide in October 1989. But there is no doubt that the more confidence Pete gained as an artist, the more his art genuinely represented him and his dark outlook on life, not to mention the eight years he spent in a Catholic school.

The man may sadly have left us, thanks to a heart attack at the age of 48, but he also left behind a unique body of work which genuinely came to reflect his complex personality. At a time when so much rock music feels squeaky-clean, it’s never been easier to see that Pete approached his music with the same passion he dedicated to his many bed partners. Each and every chord drips with atmosphere, the musical arrangements are evocatively dense and the whole bewitching brew forms way more than the sum of its musical influences. This kind of authenticity and distinction will surely resonate for decades to come.

Even though I’ve always enjoyed the obvious classics like Christian Woman (‘Jesus Christ looks like me’) and Black No 1 (Little Miss Scare-All), there was too much space between Type O Negative’s power chords for me to personally love their music. In terms of fascinating and self-deprecating interviewees, however, who brimmed over with interesting contradictions (such as posing naked for Playgirl, despite having grown up “feeling disgusting, like 230 pounds of mucus”), a deep intellect and the ability to make you do an actual LOL in person, Peter Steele was hard to beat.

Back on that 1996 Brooklyn cassette tape, I turn the conversation to how Pete has become shrewd enough to play the press at their own game, often manipulating them by making up stories and telling a different one to each journo.

I ask him, “Why is it that, unlike 90 per cent of other rock musicians, you’re aware of the power of the press and how it works?”

Without missing a beat, he says, “Maybe because I can read.”

How we miss him now…

You can listen to Jason's full 1996 interview with Pete below.

Some people are born to rock, but these musicians all had to really work for it…