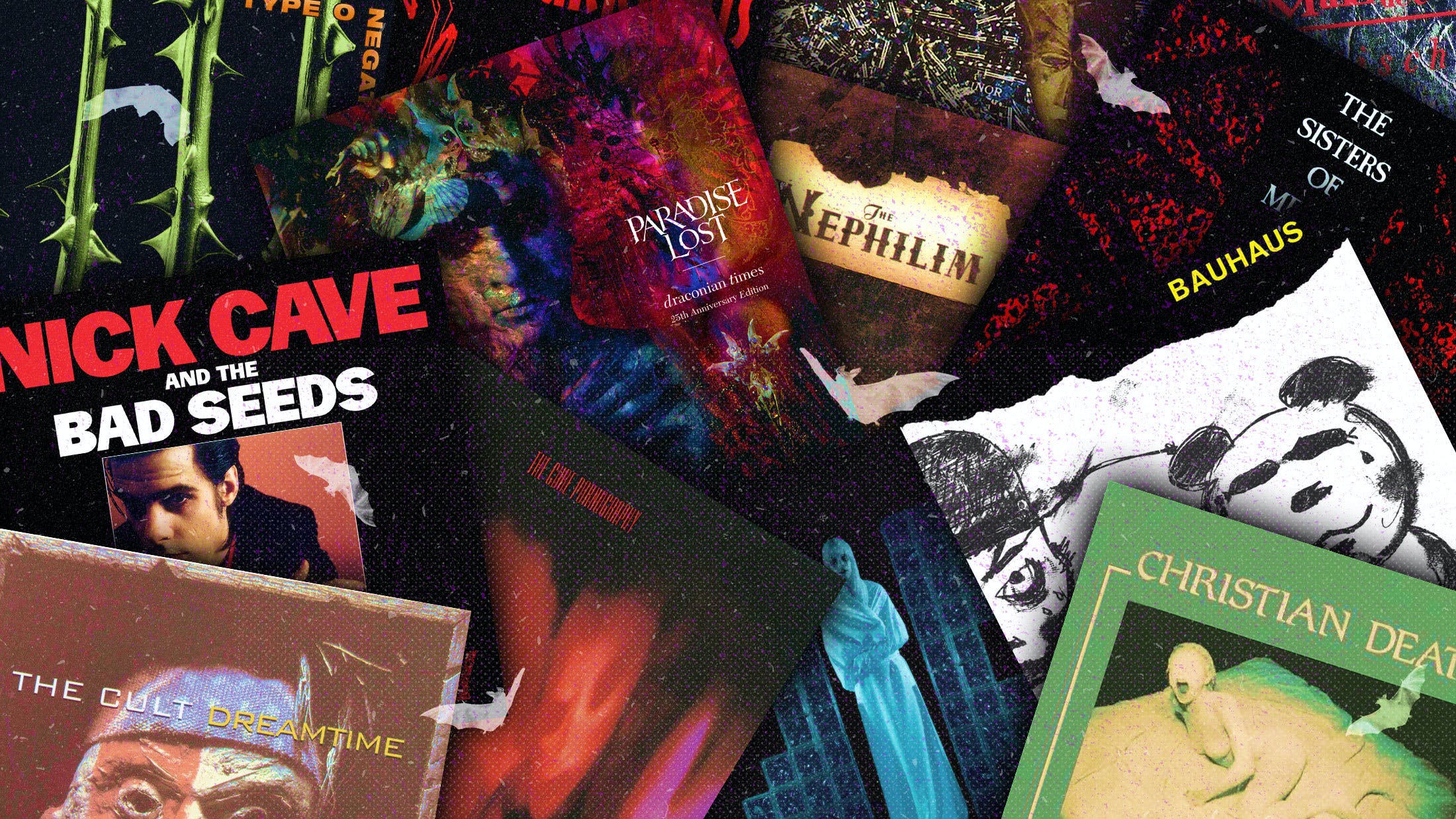 Goth is not the easiest genre to define. There’s no arguing that it grew out of post-punk in the UK in the late ’70s and early ’80s, but even from that starting point it remains difficult to pin down. It doesn’t help that most of the people you might think of as goth’s prime movers have rejected the tag. Bauhaus, The Cure and even Andrew Eldritch of The Sisters Of Mercy have categorically stated that they are not and never were goth. Andrew said in a Virgin.Net interview in 1997: “I'm not interested in what g***s think… I’m constantly confronted by representatives of popular culture who are far more g*** than we, yet I have only to wear black socks to be stigmatised as the demon overlord.”

So if the bands themselves won’t own their own gothness, it’s down to the perception of others. And, if it looks like a bat and squeaks like a bat, it’s unlikely to be a duck. Gothic music has a tendency to lean towards the dramatic and artistic, often with a literary or poetic bent. There’s a romance to it, even when it’s dealing with dark and melancholy themes. There are bands that helped set the scene for goth, like German artist Nico, her one-time collaborators in The Velvet Underground and gloomy post-punks Joy Division. There are countless bands who have taken a slice of inspiration and then there are bands like The Cramps and Cocteau Twins who were embraced by the scene if not fully goth themselves.

This list, though, consists of albums that could generally be described as classic goth albums. Now… release the bats!

Most of this list revolves around classic bands who helped define the genre, but we’ll start with current cult faves Drab Majesty. The duo are yet another act who are reluctant to embrace the goth label. Last album Modern Mirror was a lot sparklier, but their second full-length was arch, dramatic and decidedly dark, revolving around the UFO suicide cult Heaven’s Gate. Whether they like it or not, many see them at the forefront of a new rash of goth and darkwave bands, including the likes of fellow Californian Gvllow, Turkish duo She Past Away and London’s finest new purveyors of darkness Black Angel.

Despite misconceptions to the contrary, goth only rarely focuses on vampires and things that go bump in the night, more often getting philosophical and dwelling on the darkness of the human condition. Cheltenham’s Inkubus Sukkubus delve fully into the supernatural, with songs full of horror, pagan myth and blood-slicked romance. If you want an album to read your Anne Rice Vampire Chronicles to, this could be the one.

This list is dominated by bands who emerged in the ’80s, primarily because they set the blueprint for what would come after, and remain massively influential even now. Goth never went away, though, and second and third-wave bands put out some incredible music. San Francisco’s Switchblade Symphony were one such, helping to usher the genre into the 21st century with a broad, cinematic sweep that mixed darkwave grooves, atmospheric electronica and beautifully ethereal vocals.

Germany has long been a stronghold of all things gothic. In Xmal Deutschland they had their own dark icons, but the band had to come to England first, playing shows in London and being championed by legendary DJ John Peel. They were dogged by constant Siouxsie And The Banshees comparisons, due largely to the fact that both were fronted by strong, distinctive women, but Xmal had their own unique sound and their debut album still stands up decades on.

Nick Cave’s first outfit The Birthday Party had a big influence on what would become the goth scene, especially with cult single Release The Bats. The Aussie band were noise-drenched and chaotic, whereas his latter output has tended to be more measured. His rich croon is perfectly suited to delivering murder ballads, but Tender Prey sees him at his most poetic and gothic. Not that the singer himself looks at it particularly fondly, once saying: “I hear bad production and I hear bad performances as well,” before admitting it was made “at a difficult time in my life when things were spiralling out of control in a lot of areas”.

Okay, so this veers into hybrid gothic metal territory, but on their fifth album Paradise Lost turned the goth part all the way to 11, with the death/doom of old all but gone. There are two broad types of gothic metal: one with a big symphonic sweep that tends to originate from mainland Europe, and the other a gloomy, dense tangle of shadows emanating from Northern England. Paradise Lost were definitely from the latter camp and Draconian Times remains a dark, heavy and fiercely intelligent masterpiece.

Sex Gang Children were one of the original bands to emerge from legendary London club The Batcave in the early ’80s. The Cult’s Ian Astbury reportedly said of frontman Andi Sex Gang: “I used to call him the Gothic Goblin because he was a little guy, and he's dark. He used to like Édith Piaf and this macabre music, and he lived in a building in Brixton called Visigoth Towers. So he was the little Gothic Goblin and his followers were Goths. That's where goth came from.” Whether true or apocryphal, the one album that sprang from the band’s original incarnation was hugely influential on a coalescing goth scene, drenched in catacomb echo and a raw aggression that recalled that scene’s punk roots.

Spaghetti goth, anyone? Fields Of The Nephilim adopted a ‘dust and death’ image, inspired by Sergio Leone’s classic westerns, with the weathered look achieved – by the band’s later admission – by coating themselves in Mother’s Pride flour. There was a western twang to the music at times, but The Neph were also pretty versatile, mixing in hard rock riffs and sweeping gothic atmospherics, along with occult references to Aleister Crowley (on hit single Moonchild) and Lovecraft’s Cthulhu mythos (The Watchman and Last Exit For The Lost).

Some time between their beginnings as Southern Death Cult and their transformation into an AC/DC-sized hard rock riff machine in the late ’80s, The Cult hit peak goth on the swirling, shimmering Dreamtime. The reborn band’s debut album sounds big, but in a different way to their latter output, while Ian Astbury’s fascination with the indigenous cultures of America and Australia was channelled into songs like Spiritwalker, Horse Nation and the driving title-track.

We said earlier that there were two main streams of gothic metal. Well, there was also Type O Negative, but they stood alone. We could easily have gone for preceding album Bloody Kisses – the two tread similar ground – but October Rust gets the nod thanks to a consistency in the superb songwriting and a generally sombre air (those dickaround segues and voiceovers notwithstanding). Where follow-up World Coming Down was genuinely depressing, October Rust retains a sense of romance to its vignettes on love and death, while Peter Steel’s seductive baritone rumble has never sounded better.

While this album might not have aged as well as some on this list, its importance can’t be understated. Goths have always liked a bit of a foray to the dancefloor and, while they might not have invented it, the Netherlands’ Clan Of Xymox pretty much defined the upbeat gloom of gothic rock’s electronica-loving little cousin darkwave. John Peel may well have coined the term in reference to Xymox in fact, and their debut album would prove to be a jumping off point for a huge club scene in Europe and beyond.

Goth might have spawned in the north of England before flitting south to The Batcave, but it would soon start to spread to all parts of the globe, inspiring bands like LA’s Christian Death. Some would say including second album Catastrophe Ballet over debut Only Theatre Of Pain is blasphemy, but the band liked a bit of blasphemy themselves and their self-styled deathrock started out in more of a horror-punk vein. It was only on their sophomore album that they adopted a more measured but no less powerful approach, with a more elegant musical shimmer and a philosophical lyrical bent. They also proved that you could channel your inner darkness, whether you were caught under perpetual Yorkshire drizzle or baking under the Californian sun.

“At a signing the other day, someone asked me how it felt to be the queen of goth,” Siouxsie Sioux told The Guardian in the mid-2000s. “I said, ‘That's rather like being known as the Prince Regent of fools.’ I hate all that. There is a fun, flippant side to me, of course. But I would much rather be known as the Ice Queen.” We’re returning to a theme here, but whatever her thoughts on the matter, Siouxsie is and always will be the queen of goth to a hell of a lot of people. Yes, they were making original, dark, uneasy and utterly thrilling music before the term ‘gothic’ had been applied to any scene or style of music, but it’s easy with the benefit of hindsight to place this as one of the cornerstones of what would come after.

The Cure frontman Robert Smith was good friends with Siouxsie and her bassist Steven Severin, and would go on to play in The Banshees for a while, not to mention attending The Batcave on occasion with Severin. The Cure was always his main focus, though, and Pornography was undoubtedly their gothiest album. Even Robert, who again generally denies the goth tag, conceded that it could be applied in small doses. “Cold from Pornography, I think, sounds gothic, inasmuch as you can say it’s got that particular sound,” he told Rolling Stone in 2019. “I’m aware we played a part in it, and I think that we’re part of the history of goth, without question, but like a footnote.”

Perhaps the most important nine-and-a-half minutes in the development of gothic music are contained within Bauhaus’ tomb-scraping debut single, Bela Lugosi’s Dead. And… it’s not on this album. Nor is it on debut full-length In The Flat Field as, back in the day, singles and EPs often stood as their own entities. In The Flat Field was still a great and hugely important album, but the follow-up was just better. The songs were better realised and the production far fuller, with more use of elements like acoustic guitars, synth and sax. It manages to be simultaneously catchy and jarring as it sets the scene for generations of dark grooves to come.

It’s worth noting that, as with Bauhaus, some of the Sisters’ finest moments never made it to an album. If you’re a newcomer you should also check out the Some Girls Wander By Mistake compilation for the early EPs, but the band’s debut album stands as a superb body of work in its own right. From the mechanical assault of drum machine Doktor Avalanche, to the echoing guitars and Andrew Eldritch’s cadaverous vocals, there’s an otherworldly, unsettling quality to it all. Opener Black Planet is claustrophobic and apocalyptic while Marian is a windswept love song imbued with haunting 12-string guitar, while Andrew pleads with the character of the title to save him from the grave. It might be the crown no-one wants, but The Sisters Of Mercy have it – first and last and always.