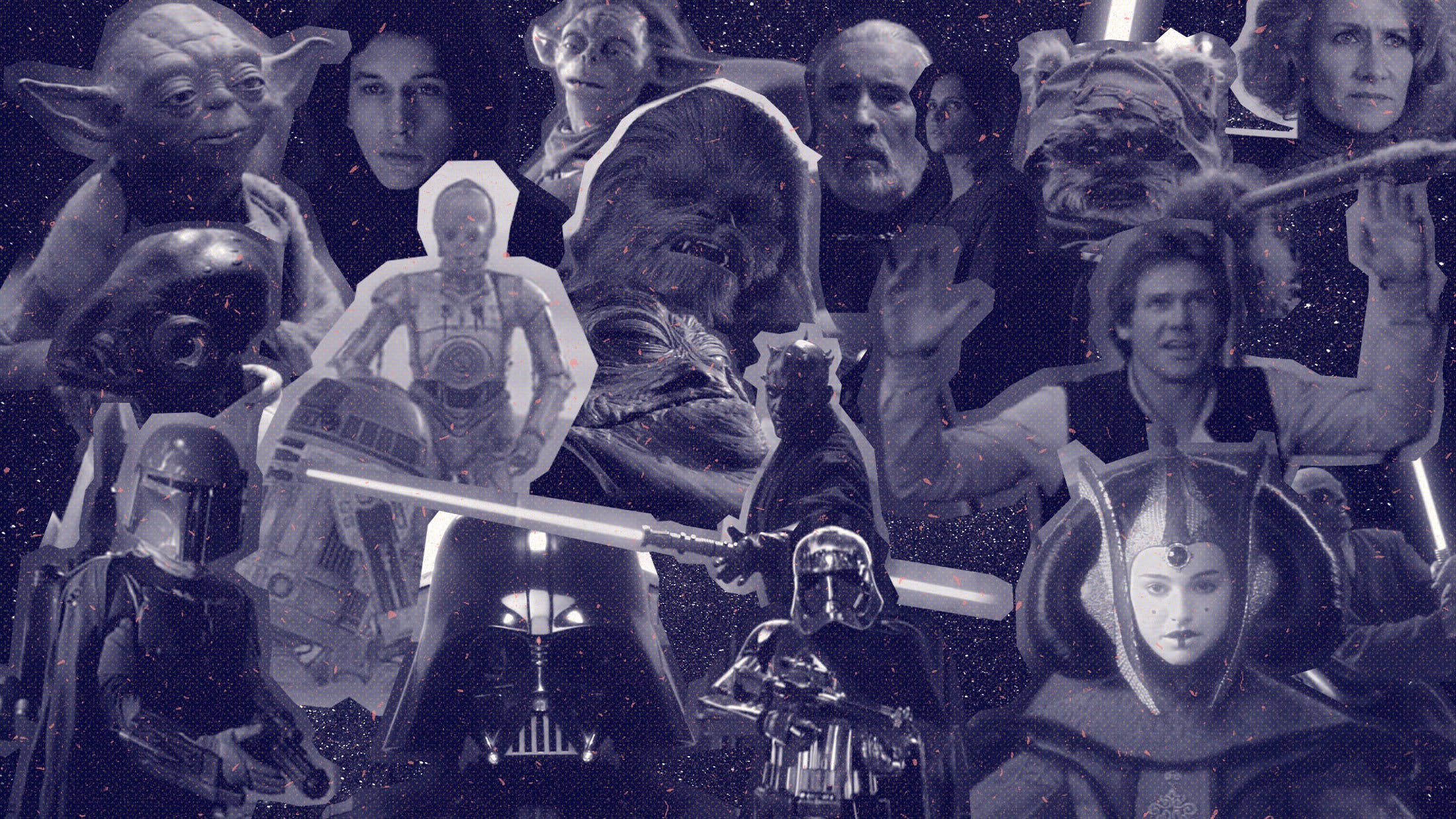 Bill Kelliher from Mastodon loves Star Wars so much that he named his son Harrison after Han Solo actor Harrison Ford. He’s not alone in his adoration of the epic space opera, either; the combination of mythology and lasers is a powerful one. Polish death metal giants Vader and nerd-punk veterans Nerf Herder both owe their names to the franchise, for instance, while Galactic Empire have based their entire career around George Lucas' tales.

There are hundreds of characters in the Star Wars movies, but who is the most metal of all, in a galaxy far, far away? Let's find out.

Dude’s just listening to his headphones all the time, keeping it real. You go for it, man.

Kit Fisto sounds like the name you temporarily give your really shit band when you’re 14, and never get round to changing, and grow to really hate but feel trapped by. Also, the character has snake-like tendrils instead of hair, and A) snakes are hella metal, and B) they’re slightly reminiscent of Rob Zombie’s dreads.

There’s a lot to be said for cover bands. They play the hits, will never ruin the vibe by insisting on pushing their new material, and cost a fraction of the price of the real thing. If you get so drunk you don’t remember the Guns N' Roses show, you’re livid, but if you get so pissed you don’t remember diving off a one-foot stage into a crowd of 16 watching Guns N’Daffodils at the Duke’s Head on a Monday night, you probably had a whale of a time. Yaddle is the Yoda you can see for four quid and sneak your own tins in.

Sporting chunky more-is-more armour like a chilly member of GWAR, Saw Gerrera has the knackered voice of someone who ignored all the advice about vocal warm-ups and strengthening your larynx, and got overexcited at his death metal band’s first show. It’s not about volume, Saw, it’s about control.

Baze Malbus is a big hairy dude with a greying beard who is super into layering – something that could describe a lot of people in the metal world. He also spends his last few moments repeating the line “The Force is with me and I am one with the Force” again and again; the equivalent of when a riff gets stuck in your head and you find yourself doing it with your fingers even if you don’t actually play any instruments.

Ahsoka Tano has a bit of a Peter Criss thing going on – real glam-metal vibes. You could totally see her fronting a band on the same bill as Quiet Riot, Hanoi Rocks and Twisted Sister, really drunk in LA in like 1983. Brilliant.

Admiral Ackbar is the Wes Borland of space, and we will not be taking any questions.

He’s ever so angry, is Ben Solo. Until he does the, uh, murdering and stuff, he’s basically an angsty teenager yelling at his parents, growing his hair out, doing some lifting at home to try and get pumped, and dressing all in black. They never show it in the films, but he is absolutely a fan of Papa Roach.

Captain Phasma looks like she’s wandered off the cover of a 1970s prog album, all shiny chrome and bigness. If you cut out a picture of her and stuck it to the front of any record by Asia or Yes, she would totally fit in.

The Tusken Raiders look like they read an article about Slipknot’s masks that didn’t have any accompanying pictures, and did their best with what they had to hand. It’s all a bit pipe-cleaners-and-papier-mache, but it’s got something to it.

Ewoks are small, but they’re fierce. They’re like Danzig. Don’t write in.

A combination of steely reserve and extremely exciting hair? That’s a pretty metal combo, and dying by crashing two spaceships together at light speed is bordering on showing off.

Politically engaged and frequently imprisoned, there’s no way Jyn Erso doesn’t have A) a zine going on with a tape trading section in the back, B) a blackened crust band producing anticapitalist anthems, and C) interesting views on anarcho-primitivism and rejecting modern consumer culture. Also: she wears a lot of black.

At first Han Solo doesn’t seem that metal, he’s a bit too swaggery and insincere. But hang on – he’s a pilot who likes sleeveless jackets and is handy with a sword. We know a guy like that. Han Solo is Bruce Dickinson. You could probably argue that the bit where he was frozen in carbonite is the Blaze Bayley years. Again, don’t write in.

If Jabba The Hutt put out a sludge record, it would be so, so sludgy. Like, how much sludgier could it be? None. None more sludge.

The dorkiest droid in the universe is a walking supercomputer, supposedly able to speak six million languages. You can guarantee he’s a sub-genre nerd, spoddily insisting that the grindcore band you like is technically better described as deathgrind, actually, and explaining why at great length, citing upwards of 200 bands you’ve never heard of as proof. Props for the Wyld Stallyns-esque crop-top though.

There are two Boba Fetts. The cute young version we see in Episode III is not metal. The faceless bounty hunter of The Empire Strikes Back and Return Of The Jedi, though? Completely metal. He’s got a bit of a Buckethead thing going on, with the lack of visible eyes just adding to his mystique.

Those are tattoos on Maul’s face – dude’s a lifer.

C-3PO’s description of The Sarlacc sounds like Iron Man-era Sabbath: "In its belly, you will find a new definition of pain and suffering, as you are slowly digested over a thousand years." That’s fucking savage, yo.

Yoda lives in the woods and talks funny, which are both fairly metal traits. The Force seems like it would lend itself to doing some pretty amazing tapping techniques and all. It seems reasonable to assume that sometime between Revenge Of The Sith and A New Hope he at least experimented with growing his hair out and doing a Fu Manchu-esque stoner metal band. High as shit, he is.

Metal as all hell. When he does his creepy smile thing, you’d absolutely believe he was related to Ozzy, and then when he’s all grumpy he’s basically channelling King Diamond. If all of Dimmu Borgir went “Here’s our dad”, this is who would come out. There are real Mortiis vibes to his lumpy face, and he occasionally seems to be in full-on corpsepaint. Cloaks are metal as hell and all.

A little bit of work on Queen Amidala’s hat and she wouldn’t be a million miles away from Ghost's Papa Emeritus. Stick her in front of a few Nameless Ghouls, whack the smoke machine on, have a ball with the lighting and you’ve got yourself a show.

Count Dooku is played by Christopher Lee, the legendary actor who released two symphonic metal concept albums about Charlemagne, the first Holy Roman Emperor. What a man. Obviously he was an actor, and not his character, but anyone badass enough that they’re putting out metal records in their 90s transcends the usual barriers between performer and role.

The single most important element in making a rock star a rock star? Charisma. Sheer fucking presence, and this wobbly bin somehow has shitloads.

The early years were totally Disney Channel, and the Hayden Christensen era was emo as all hell, but by the time he’s full-on Darth flippin’ Vader, a charred wreck wearing hella cool armour and talking in a none-more-bassy voice, Darth Vader is all metal. He’s basically Rob Halford – incredibly powerful, recognised throughout the galaxy and has a shiny head. Ledge.