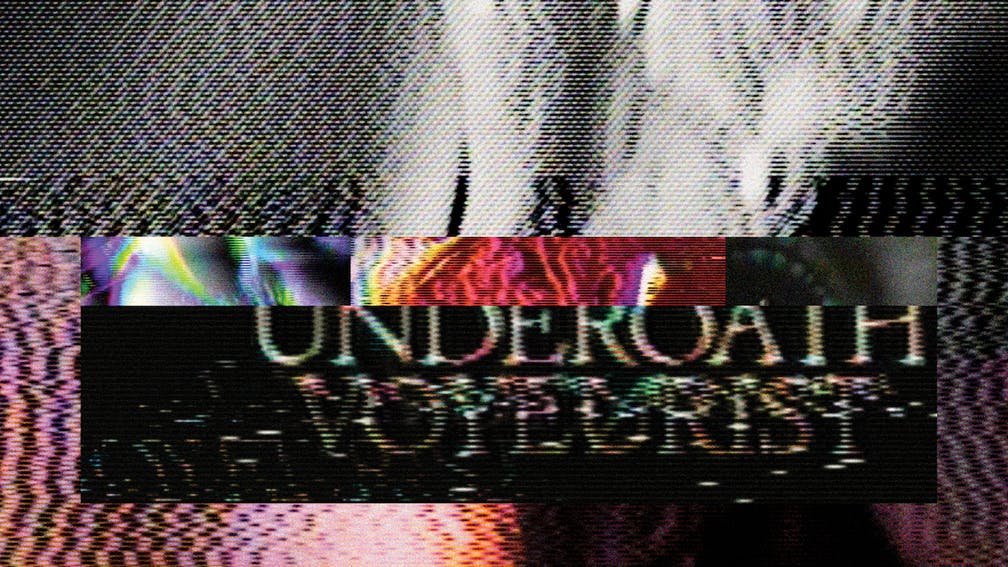 There’s a moment on this ninth Underøath album when everything slows down. It’s a song called (No Oasis) – the sixth of the 10 that comprise Voyeurist – and it’s two minutes and 49 seconds of calm that feel like floating underwater. ‘No-one’s coming back for me,’ sings Aaron Gillespie at one point in a hushed almost-whisper. ‘You believed so hard you hollowed out your mind,’ he declares at another, before the track ends with an unnerving, maniacal laugh. Soothing and savage in equal measure, it then launches into Take A Breath, a full-throttle post-hardcore track that’s more typical of the rest of the album.

Of course, there’s nothing typical about Underøath. Formed in Tampa, Florida almost 25 years ago, the band have changed their style almost as much as they’ve changed line-ups, evolving steadily in that time. The raw, death metal-tinged brutality of 1999’s debut Act Of Depression morphed into the more polished melodic screamo of 2004’s They’re Only Chasing Safety and the metalcore mayhem 2006’s Define The Great Line, and the band continued to mess with the boundaries of those genres as the years went on. After 2010’s brutal seventh album Ø (Disambiguation), there was a brief, two-year hiatus in 2013, before the band finally returned with new music in 2018 with the relatively digestible atmospherics of Erase Me, which welcomed back drummer and clean vocalist Aaron into the fold alongside lead vocalist Spencer Chamberlain.

Whatever direction those albums and line-ups took, however, it was all underpinned by the band’s faith – or, perhaps more accurately, their struggles with it. That remains true on Voyeurist, which ups the ante on the religiosity, both in terms of imagery and sound. Opener Damn Excuses explodes in wrathful fury – a fire sermon straight from the depths of Hell – before being followed by the Enter Shikari-esque textures and incantations of Hallelujah. Elsewhere, I’m Pretty Sure I’m Out Of Luck And Have No Friends starts off tenderly and tentatively before its sinister crawl explodes into a caustic, devilish procession of heavy demonic riffs. That’s continued immediately with Cycle, a brooding surge of intensity that features a verse by Ghostemane, which only adds to harrowing atmosphere.

In fact, it’s the chorus of that song – ‘Darker than Heaven, empty as God / There is nothing to live for’ – that best sums up the overriding existential bleakness that consumes this record, although We’re All Gonna Die gives it a good run for its money. It all leads up to Pneumonia, the album’s seven-plus minute swansong, the ironic warmth of which lulls you into a false sense of security. It’s only as the track reaches its crescendo that you realise that warmth is from the fire and brimstone below, the flames licking at your skin, teasing and taunting you, before punishing and engulfing you. It doesn’t matter if you believe or not – you end up burned to a crisp either way.

Entirely self-produced by the band for the first time, Voyeurist is arguably the most cohesive and coherent record of Underøath’s career to date. It’s an album that asks profound questions about the meaning of life and death, about the nature and purpose of existence (and non/un-existence) and about the role that faith and religion play in our lives – all to some of the most punishingly heavy music you’ll hear this year. It doesn’t offer any solutions, but that itself is answer enough.

Voyeurist is released on Fearless on January 14.