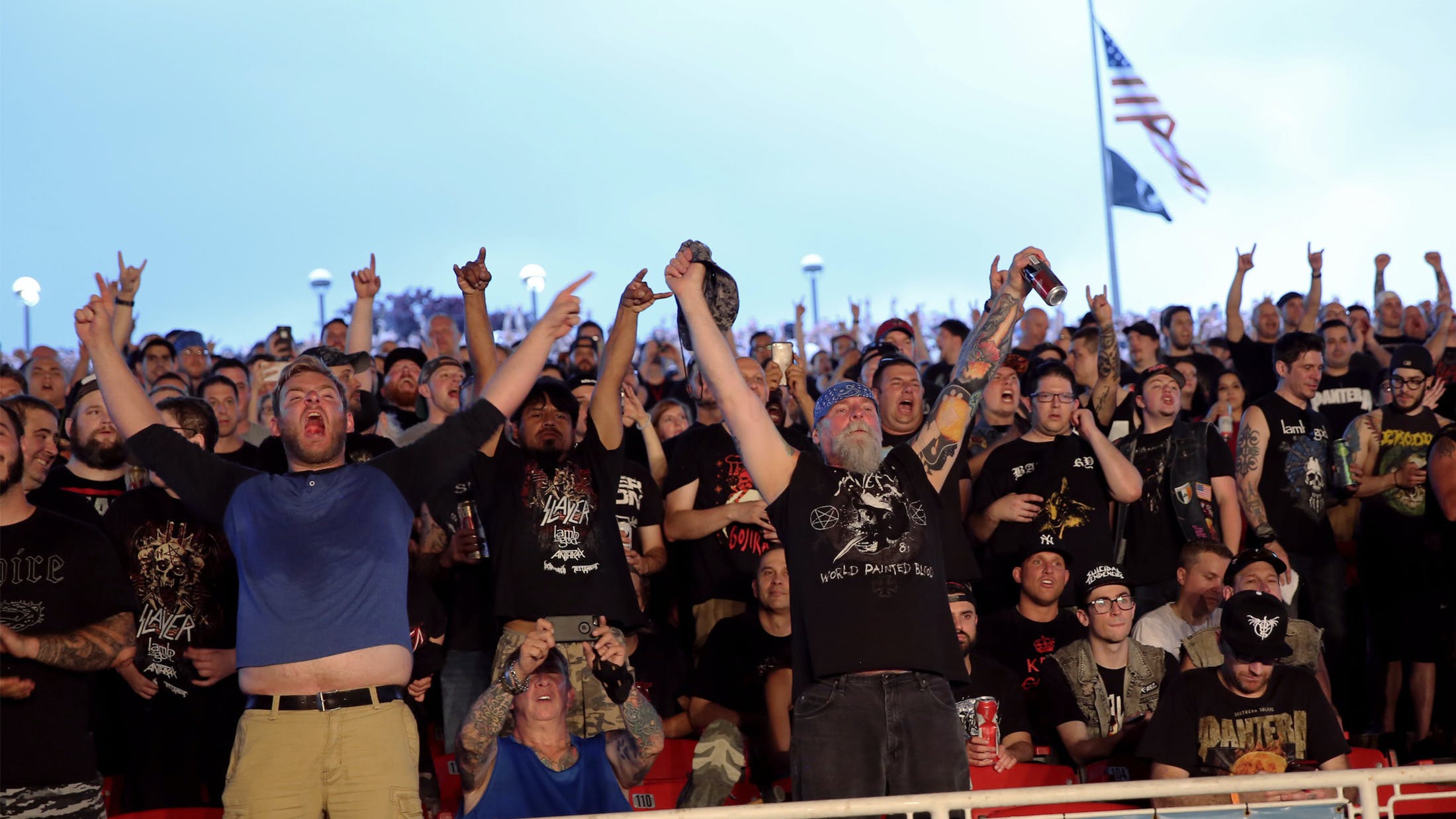 Chris Krovatin is an author and journalist whose written works include the young adult novel Heavy Metal & You and the non-fiction book Hellraisers: A Complete Visual History of Heavy Metal Mayhem. He has written for several heavy metal magazines and blogs...and, as you can imagine, he's seen Slayer.

June of 1999: I’ve just graduated 8th grade. For my birthday, my parents are allowing me and my friend -- also Chris -- to go to Ozzfest ‘99. Chris is excited to see Fear Factory and Deftones, while I’m stoked to witness a performance by my all-time favorite musician, Rob Zombie. Also on the bill are some bands no one’s ever heard of at the time (e.g. System of A Down; Slipknot), as well as some old dudes that go by the name of Slayer.

Chris’s adult cousin drives us out to the PNC Arts Center in Holmdel, New Jersey. I have twin tears of fake blood running down my face, because a) I’m 13, b) I love monsters, and c) I think it looks cool. When we arrive, my mind is boggled: thousands of ragged weirdo metalheads wander the parking lot, smoking weed, drinking beer, blasting evil riffs out of their shitbox cars. We get inside and climb up to our seats just outside of the amphitheater on the lawn (my parents, already disapproving of my newfound love of heavy metal, certainly weren’t going to shill out for anything closer).

Some huge hairball next to us wears a shirt that features some guy’s forearm with “SLAYER” literally carved into it on the back. I ask Chris’s cousin about Slayer, and he explains, “They’re old-school. Real evil stuff.” Not more evil than Rob Zombie, I counter. He smiles. “It’s different. You’ll see.”

The fest churns on. Godsmack is decent, and SOAD gets the whole place jumping. Slipknot confuses me -- is this even a band? And the whole time, everyone is screaming, “SLAYYYYYERRRRRRR!” I don’t get it. Why scream the name of the band that’s not even on yet?

At last, Slayer is up. Again, I’m confused—there’s no backdrop, no go-go dancers. Just four dudes. This isn’t evil!

What I remember, weirdly enough, is how still I stood. Just watching, dumbstruck. Because it was evil. It was so menacing and grating, but in an oddly satisfying way.

All of the creepiest, most strung-out people in the crowd go apeshit for it, too. There’s a huge mosh pit in front of the stage -- and in the seats. And right next to us. The lead singer screams, “DANCE! WITH THE DEAD! IN MY DREAMS!” and everyone begins screaming along with him. I can’t look away; I’m transfixed. Intimidated, speechless, and amazed. What…the HELL…is THIS?

The rest of the show is great. Rob Zombie delivers all the pyro and and sexy devil girls that I could have hoped for, and I buy a shirt of his with the words ‘MOTHER FUCKER’ on the back, much to my mom’s chagrin. But Slayer is what sticks in my mind. That…was something else. I have know what that’s about.

Two weeks later, at summer camp, I write home and ask my mom to send me a copy of South of Heaven at the behest of my metalhead counselor Zack (now the frontman of crushing scum-metallers Nekrofilth). I spend the rest of the summer sitting on porches listening to the album over and over. By the time I show up for Freshman year of high school, I’m wearing spiked leather and contemplating my first tattoo. I’m in.

It’s June of 2018, and my fiancée patiently listens to me tell the above story for maybe the billionth time as we drive out to Holmdel. The traffic is bad, and we’re forced to park a mile away from the venue. This wouldn’t be a problem if I’d let my editor at Kerrang! get me comped for decent seats, as per his suggestion. But I’ve refused. If we’re to believe the band’s PR reps, this will be Slayer’s last tour ever. I had to do things right, just in case they’re serious: I wanted to buy my own tickets. I wanted to stand on the lawn with all the other broke motherfuckers. I wanted to bring my fiancée, who has never seen Slayer. It’s the principle of the thing.

Nearly two decades have passed, and nothing’s changed: The lawn is patchy and muddy, and the stage still has the same awful semi-operational screens on both sides. The crowd is also exactly the same as it was in ’99: dudes with bald spots and baggy pants smoking dirty weed; longhairs in battle jackets windmilling to the between-set Pantera tracks; the few chicks with dyed hair dressed like goth ballerinas.

Testament is awesome as always, though it feels a bit weird that such a legendary thrash act would go on first, in broad daylight. Behemoth is also rad, but feels smaller than usual as spectators continue to trickle in. Anthrax is a blast, and is the first band I pump my fist and yell to. And then Lamb of God remind us all that they’re likely the best live band in metal today, with tight renditions of classics like “Now You’ve Got Something To Die For” that get the crowd moving. Vocalist Randy Blythe is in rare form.

By the time the lights go down for Slayer’s entrance, the lawn is packed; a glance in either direction shows a staggering crowd for a thrash metal band that sings about serial killers and Satanic warfare. And now, no longer having to separate itself from the unnecessary fanfare of nu-metal, the band has created an awesome stage-show to behold: On a translucent screen, projected crosses invert before our eyes; two giant flaming metal pentagrams with the band’s name dance at the center. Behind it all, rhythmic jets of fire throw flames 20 feet high. But for all the new set pieces, Slayer is reliably without costume or pretense. Kerry King’s glistening bald head is visible from all the way back on the lawn.

The band opens with the title track off of Repentless, but quickly shake things up by following it with Blood Red from 1990’s Seasons In The Abyss. What follows is a zig-zagging tour of Slayer’s entire discography, including tracks from less-recognized albums like 2006’s Christ Illusion and 1996’s Divine Intervention. The performance isn’t entirely flawless, as Tom Araya flubs his entrance into Black Magic, but it ends with six perfect renditions of the ultimate Slayer classics: Dead Skin Mask, Hell Awaits, South of Heaven, Raining Blood, Chemical Warfare, and of course, Angel of Death.

Throughout all of this, I act like a man possessed. I headbang and throttle and claw at the air as though in diabolical ecstasy. I pump my fist so hard I pull a muscle. I scream lyrics I wasn’t even aware I knew. I shout “SLAYER!” so many times that by the end my throat stings like Hell and my head splits. All around me, everyone does the same. The lawn becomes a semi-circle of mosh pits, and even those of use who don’t go down swinging grab each others’ shoulders and cackle like demons with every new anthem to all things fast, loud, and evil.

And then, it’s over. The guys come to the front of the stage and toss out sticks and picks. “Thank you,” says Tom. “Thank you for sharing all this time with us.” Kerry King is the last one onstage, and I hope he will never leave, but even he gives his final wave to Jersey, and marches off.

As we trudge towards the exits, my eyes move through the crowd, taking in sweaty bodies, stumbling drunks, and satisfied smiles. For a second, I wonder if through some feat of time travel, I’ll spy a thirteen-year-old kid with fake blood on his face, dumbstruck by what he’s just seen. I want to run to him, grab him by the shoulders and tell him all about the last twenty years: the parties, the bummers, the bullies, the girls, the awesome tattoos he’ll get, the books and magazine articles he’ll write. About how much of it started right here, with this band that instantly changed everything. About how I am what he’ll see if he closes his eyes and looks deep in his soul.

We stumble out into the night and start the long walk back to the car. My fiancé thanks me for sharing this with her. Every few minutes, someone yells the name of my favorite band, and like an animal answering a call in wild, I yell it back.

Slayer have just finished the first leg of their farewell tour. They're back on the road in July.

Get tickets for their November UK shows here.