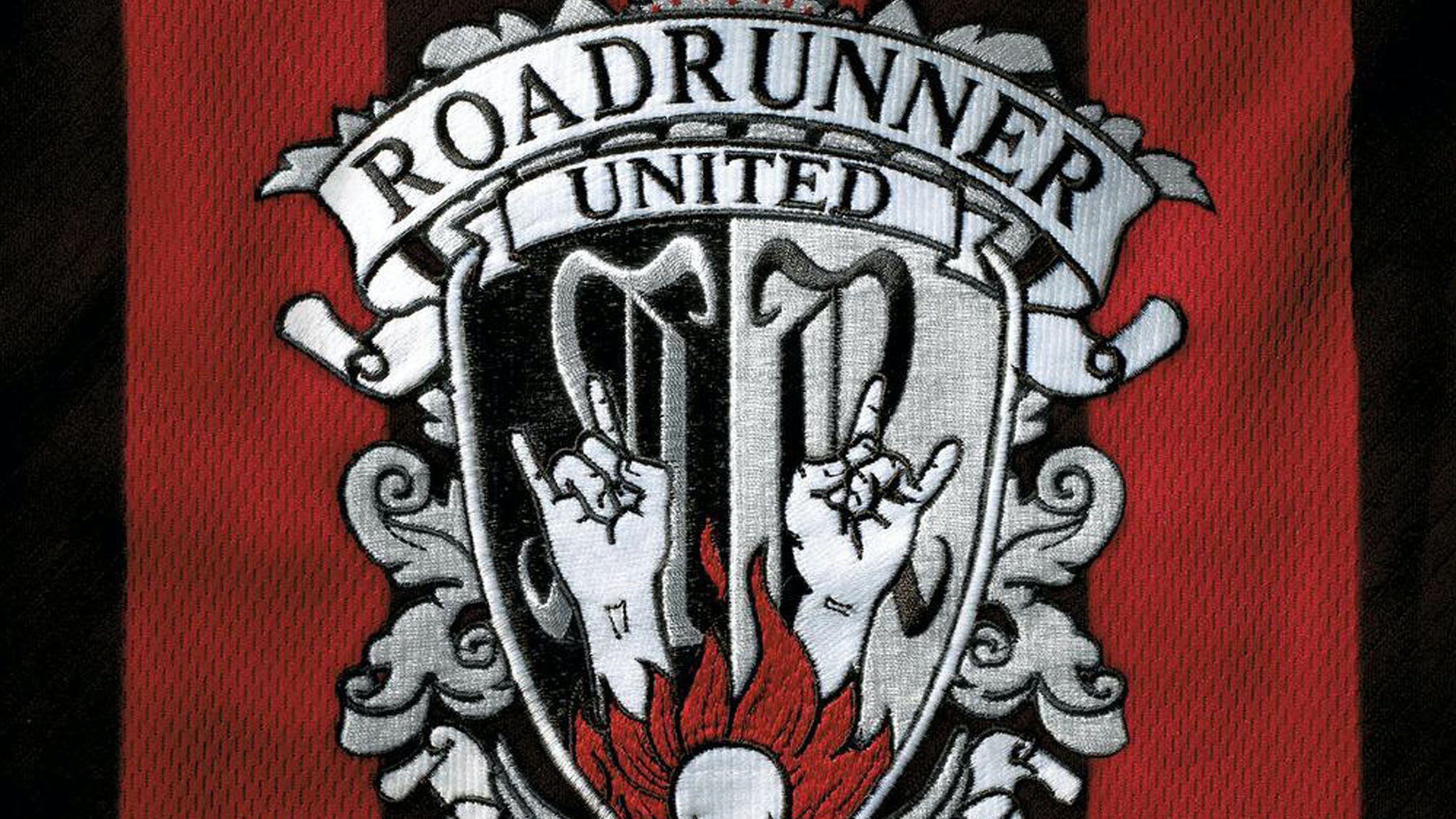 In the words of Machine Head’s Robb Flynn, Roadrunner United represented, “The super-est of all supergroups.”

Bringing together 57 artists – all of whom had played a role in making Roadrunner Records an alternative music powerhouse – to collaborate on one, unprecedented crossover record? At the time, it seemed ludicrously ambitious. But, 15 years on from its October 10, 2005 release, The All-Star Sessions stands as a testament to what the metal community can achieve by joining forces.

“I was on tour with Slipknot when Monte Conner [then Vice President of A&R at Roadrunner] came to me with the idea,” recalls Joey Jordison. Alongside Robb, Fear Factory’s Dino Cazares and Trivium’s Matt Heafy, he was one of Roadrunner United’s team captains. Each of the four would write a portion of the album’s 18 songs, and have free rein to recruit musicians and vocalists who’d featured in Roadrunner’s then-25-year history.

“Back then if you were a metalhead, you’d just be like, ‘I want to be on Roadrunner,’ and getting signed had been a dream come true for me,” he continues. “So for this record I wanted to cover all the bases, everything that I’d learned as a musician and a fan of music. Each song was totally different.”

“I used to work in a record store back in the late-’80s, when I was about 17, 18 years old,” remembers Dino. “There was a particular guy who’d walk in with the promo materials for bands on Roadrunner, posters and vinyl, and I remember thinking, ‘Wow, that label is just putting out quality stuff!’ They were releasing all of these amazing death metal bands, like Deicide, Suffocation, Immolation, and if you were into that kind of music, you couldn’t go wrong. With Fear Factory, it was exactly where I’d wanted us to be. So being involved in this project was such an honour.”

“I had a couple of riffs left over from Through The Ashes Of Empires that I hadn’t ended up using, so brought them into play first-off for Roadrunner United,” remembers Robb Flynn. “The song that really kicked it off for me was The Dagger. I was like, ‘Man, this is a fucking banger… I don’t know if I even want to give this away!’ I actually told the label, ‘If you can lock in Howard [Jones] from Killswitch Engage to do the vocals, you can have it… otherwise I’m keeping it for Machine Head!’”

“We had so much fun when Howard flew in to record that song at my studio. He only had about three sentences of lyrics prepared, so we spent hours talking over what the song could be about, and then he freestyled a bunch. I remember him getting up, walking into the vocal booth, and just belting out this fucking insane scream, this screech! It became the sound that opens the whole record.”

For Matt Heafy, becoming a captain could have been an intimidating prospect. Still a teenager at the time, and at the centre of an unexpected phenomenon (Ascendancy had been released a matter of months beforehand, turning him into one of metal’s heirs apparent) he wasn’t short of new challenges to grapple with. But…

“It helped that this was the era of Trivium being the confident, cocky bastards that the UK loved,” he laughs. “Because we were on tour so much, our abilities were really sharpened. I was excitedly nervous, but not in the sense of, ‘I can’t do this, I can’t live up to it.’ I had something like two or three weeks to write the songs, record them, do it all, so there was no time to think, ‘This might not happen.’ And with me going around saying the things I was saying at the time, I had to live up to it. My biggest fear was not being able to get the musicians I wanted. I had to have a song with Mike Smith from Suffocation, because he’s one of the sickest death metal drummers of all time, and I also knew that I wanted to write a black metal track.

“At the time, I didn’t know the music of Mercyful Fate or King Diamond all that well. I remember checking out one or two songs off of Abigail, and writing what became In The Fire for King on vocals. It’s funny, because now I’m a huge fan. I met him last year on tour and he gave me a big hug, said, ‘I still love the song, we need to make a sequel!’ We’ve talked about doing In The Fire… Part Two for years, and I’d love to get Ihsahn from Emperor on there too.”

After recording the instrumental tracks, the captains would mostly send them off for vocalists to complete their parts remotely. It made for a few surprises…

“Annihilation By The Hands Of God was the first song I wrote for the record,” remembers Joey. “When I got in touch with Glen Benton [of Deicide], the first thing he said was, ‘Are you cool with anti-religious lyrics?’ And I was like, ‘Well, what else are you gonna do?!’ He fucking killed it, too.

“But my favourite song on there is Enemy Of The State, with [Type O Negative’s] Pete Steele. I was like, ‘Do whatever you want man, I don’t care!’ And… he delivered back his vocals in this made up language, the language of this made up country he called Vinland. When I listen to that now, I’m like, ‘Man, this is the shit.’ Obviously I was expecting normal lyrics at first, but I’m glad he didn’t do that - it makes the song so unique.”

For Dino, the studio experience itself was a highlight.

“I just loved the camaraderie and respect that everyone had, you know,” he says. “There were no big egos clashing, was no fighting, nothing like that you would get with a regular band! Everybody had this mutual respect, because each of us had a particular talent, and got their own moment to shine. Me, Andreas [Kisser, of Sepultura], Paul Gray [of Slipknot] and Roy Mayorga [of Soulfly and Stone Sour] had such a good time that we were like, ‘Yo, we need to actually start a band.’ We talked about it for years afterwards, but sadly it just never worked out.”

Though Robb had been somewhat hesitant at first, once things started rolling, they just didn’t let up.

“There was this whole wave of songs that came flooding through,” he nods. “One of them I thought would be good for Corey Taylor, because I knew that Slipknot were big Neurosis fans. That became The Rich Man. Army Of The Sun started out as a song called Pins And Needles that we had written for Through The Ashes… I couldn’t turn it into something great, vocally. So I asked Monte to send it to Tim Williams from Vision Of Disorder, one of my favourite bands on Roadrunner. My jaw was literally on the fucking floor when I heard what he did with it. Lora Richardson did an amazing job herding the cats of it all, co-ordinating the whole thing.

“Then, I wanted Independent (Voice Of The Voiceless) with Max Cavalera to be, ‘What if Sepultura wrote a Bay Area thrash song?’ At the end, it took this random turn where I was experimenting with this three, four part guitar harmony, Brian May-style. And that really was a precursor to The Blackening. That little nugget of music was like a bridge, listening back now you can start to formulate where I was about to go. It really opened my mind to all these possibilities.”

Accompanied for a video for single The End, recorded by Dino and with Matt on vocals (“I was like, ‘Sure, let’s give the new kid a shot!’” laughs the former), the album defied the usual law of supergroups by being… well, really fucking good, actually. A couple of months later, a revolving cast of Roadrunner musicians saw the project out with a monumental live show in New York.

“We rehearsed our asses off, got everything tight, and then went out and just killed it,” grins Joey.

“I went there expecting to do two songs, and everybody kept bailing out of some, like the Slipknot stuff! Because of the rapping, you need a certain amount of ability to do that, and I ended up with more and more,” explains Robb, with a pretend grimace. “But it was awesome, so fun and a great vibe. We got fucking hammered. It was a great night, and in a lot of ways a great celebration of everything that was Roadrunner up until that point.”

“You don’t leave an open bar for musicians,” chuckles Dino. “As you can see on the DVD, there were some people who were having a little bit of a hard time playing. Brian Fair from Shadows Fall sang one of the songs, and he fell over because he was so wasted… it was just one of those hilarious, fun moments in time.”

A celebration of and in some senses the end of an era, the Roadrunner United project remains a unique time capsule. But it’s not impossible that, one day or another, another could come along…

“I remember years later, being at Rock Rock Bar in Osaka, and them playing the video where Robb Flynn is singing Pull Harder On The Strings Of Your Martyr with us,” smiles Matt. “I would love to do another Roadrunner United. You talk about the past present and future of Roadrunner now, and for one you would get John Petrucci [of Dream Theater] in there in a heartbeat. There are so many different options now, drawing on all of those key, generational moments for Roadrunner.”

“Honestly, I wish I could have recorded 20 more songs for it,” Joey concludes. “I still put that fucker on and crank it up, it’s a great record and something I’m proud to have been a part of. If there’s ever a Roadrunner United part two?”

He pauses, and laughs.