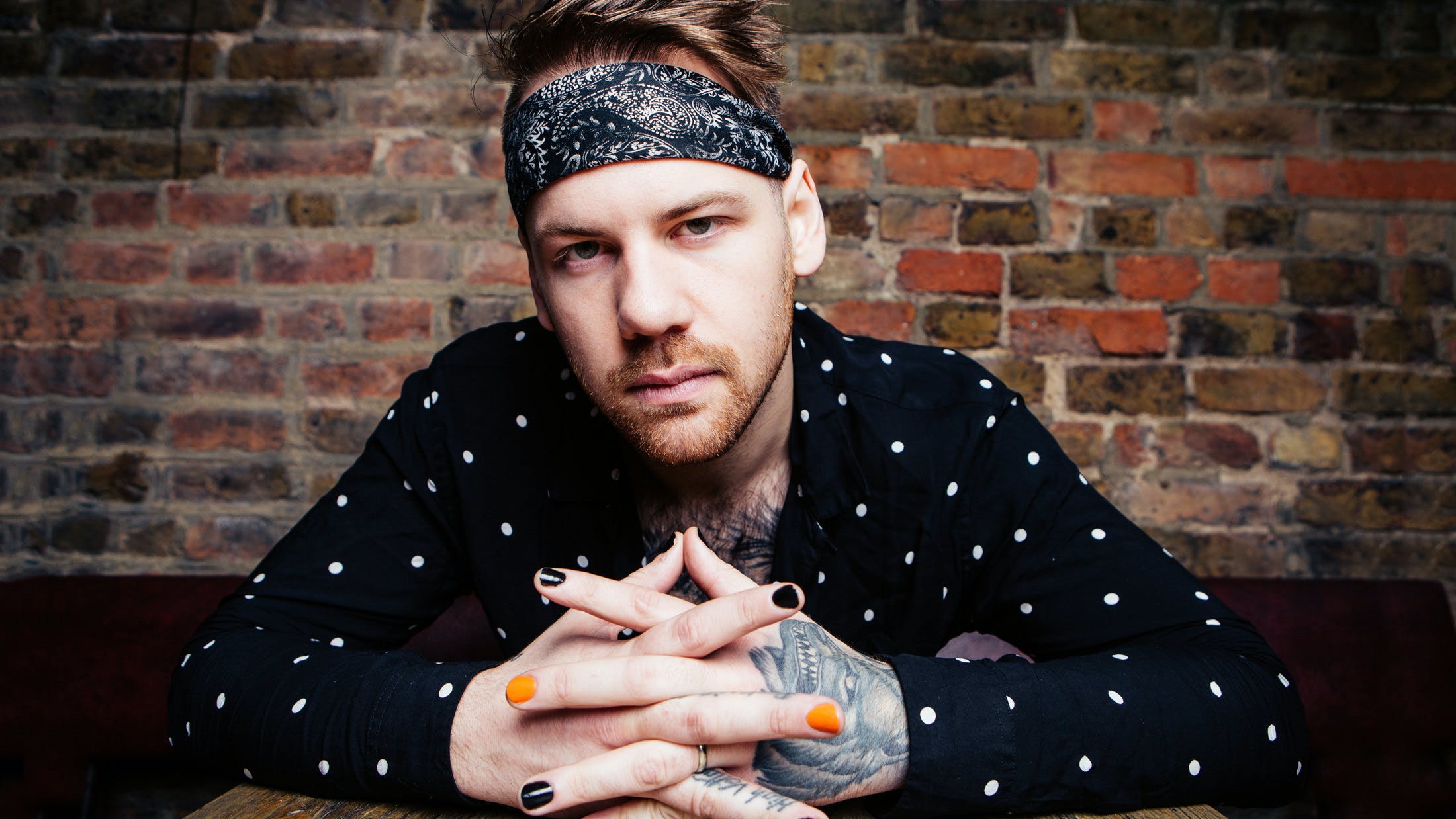 Caleb Shomo is a man renowned for spilling his guts on his records. He often won’t leave the vocal booth until his bloody intestines are smeared all over the floor (in a metaphorical sense, of course). Three very-much-personal albums, and one EP into Beartooth’s career, you’d think he might not have that much more to share. Or does he?

We used the Ohio metal mob playing our very own K! Pit as an opportunity to grill the frontman. We climbed aboard his tour bus, parked outside East London venue Blondies, to shine an iPhone torch in his face and pose some of the most challenging questions he’s probably ever had to ponder… those asked by you lot, our dear Kerrang! readers.

“I don’t like diving too much into my personal shit with people,” Caleb says matter-of-factly, “but if they’re questions I’m comfortable answering, then I’m cool with it. So fire away.”

Bradley: If you could know the date of your death, would you want to?
“Er… no, I don’t think so. There are certain things that we shouldn’t know, and I think the day we’re gonna die is one of them. I’m just gonna continue to live my life and try to enjoy it while I have it. Would it have a negative impact on my life knowing when I die? Yeah, it would. I would be so much more paranoid all the time. That’s a weight that I don’t think anybody could carry.”

Lucy: When was the last time you cried?
“Watching Architects [on tour recently] I shed a tear. It was in Belgium, I was watching their set and they got into stuff about Tom [Searle, late guitarist] and it was very emotional. It hit me pretty hard and I let one out. It’s not an everyday thing, but I’ve definitely cried at shows before. Although it’s pretty rare these days.”

Gus: If you could get away with doing anything, what would you do?
“That is a tall order of a question. I would probably jump off a super-high building or something. I’ve never done it, but the idea of it sounds really fun. Our booking agent in the States, Dave Shapiro, is always jumping out of planes and jumping off buildings and doing crazy shit. It just seems like the most fun rush. So whatever the tallest building in the world is, I’d wanna jump off it with a parachute. I was going to sky-dive with the Red Bull team, but our label told me I couldn’t do it in case I caught a cold. So, all the other guys did it while I sat and watched. That’s not rock’n’roll in the fucking slightest (laughs).”

Beth: Out of the negative emotions of greed, anger, jealousy, and hate, which one affects you the most?
“Probably anger. I try not to focus on those things. I can get pretty pissed off at the world sometimes, especially when I’m writing. I channel my anger by hitting golf balls (laughs). If I’m at home, making music or playing golf are the best ways to get negative energy out of my mind.”

Sophie: What do you think about when you’re by yourself?
“(Laughs) The human mind, that’s a complex fuckin’ organism. There’s a lot going on in there. I think about a lot of shit. Mostly just, ‘What am I gonna eat today?’ I’m not really sitting around doing the ‘chicken or the egg?’ deal, I’m more, ‘Where’s the next meal?’”

Jack: If you could have anybody else’s life, whose would you take?
“Two people: Freddie Mercury. That would be an insane person’s head to be in, to know how he thought. What’s the thing I’d most like to do as him? Fucking write music with Queen (laughs)! To be able to have those kind of talents would be nothing short of cool. And also: Malcolm Young from AC/DC, from ’74 to ’85, because they put out a bunch of kick-ass records then, and it would be sick to play guitar on those.”

Louis: Have you ever questioned your sanity?
“Absolutely. Making Beartooth records, pretty much every single time (laughs). Towards the end or somewhere in the middle I usually have a bit of a mental breakdown, but I always find a way through it. Diving into all those parts of my life and writing songs about it knowing that a ton of people are gonna hear it is an interesting thing. It can get a bit dark. At least I’m giving it my all. If it was all fun and games and super easy the whole time, something would not be correct in that record writing process.”

Liam: Which fictional character do you most relate to?
“Probably Animal, the drummer from The Muppets. He just always wants to rock (laughs)! And that’s my biggest thing, I always wanna keep rockin’. I feel [we have that in common].”

Abigail: What’s one thing people always misunderstand about you?
“A lot of song lyrics. I can be very intense with some of the metaphors I use, and people don’t realise that they’re metaphors, and it can be a bit obnoxious sometimes. People read into things really deeply, and then make assumptions, and tell you you’re a shitty person because of it. People can be annoying sometimes. It’s the same thing of people being like, ‘Wait, you play all the instruments in the band? Why do you have a band you fucking asshole?’ and it’s like, ‘Alright guys, I’ve explained myself probably 200 times over the course of my career,’ so whatever, I’m just over it.”

Lloyd: If a genie granted you three wishes, what would you wish for?
“Aside from 2 million bucks because it’s too easy, I’ll say: whatever amp AC/DC used to track High Voltage, whatever SG guitar Angus Young played during Live At Donington ’91 and then… I’d wish for being able to play one show at a stadium, just to know what that is like.”

Chris: What bothers you most about the world today?
“People being intolerant while having no understanding of other cultures. If you look on the internet, or TV, there’s always some shit going on because people are being intolerant dickheads.”

Devin: What’s one thing you’d like to change about yourself?
“I’m honestly pretty good with where I’m at. But I wish I would never three-putt in again (laughs). When you have a three-putt in golf, generally, you’ve fucked up. It’s the most annoying thing in the world.”

Emma: If you could tell your former self one thing, what would it be?
“Don’t fucking stress so much. Take life day by day and stop worrying about things that aren’t even in front of you yet. I still stress now, but it’s not as bad as it used to be. I’m trying to be better.”

Lizzie: What’s the craziest thing you’ve ever done for love?
“My wife is from England, so trying to figure out the logistics of how to get her to America was probably the craziest shit I’ve ever done. America isn’t the friendliest about letting people from other countries in…”

Colin: Where do you see yourself in 10 years’ time?
“As long as I’m still playing or producing music I’ll be happy. Outside of music there’s literally nothing else I’m good at in this life (laughs).”

Josie: Do you believe in fate or that we create our own destinies?
“You gotta work for what you want. The world isn’t gonna hand you shit. Anyone who’s done great things has worked really fucking hard to do so. You gotta earn your keep in this world.”

Beartooth are touring the UK in February 2020 at the dates below. Get your tickets now.