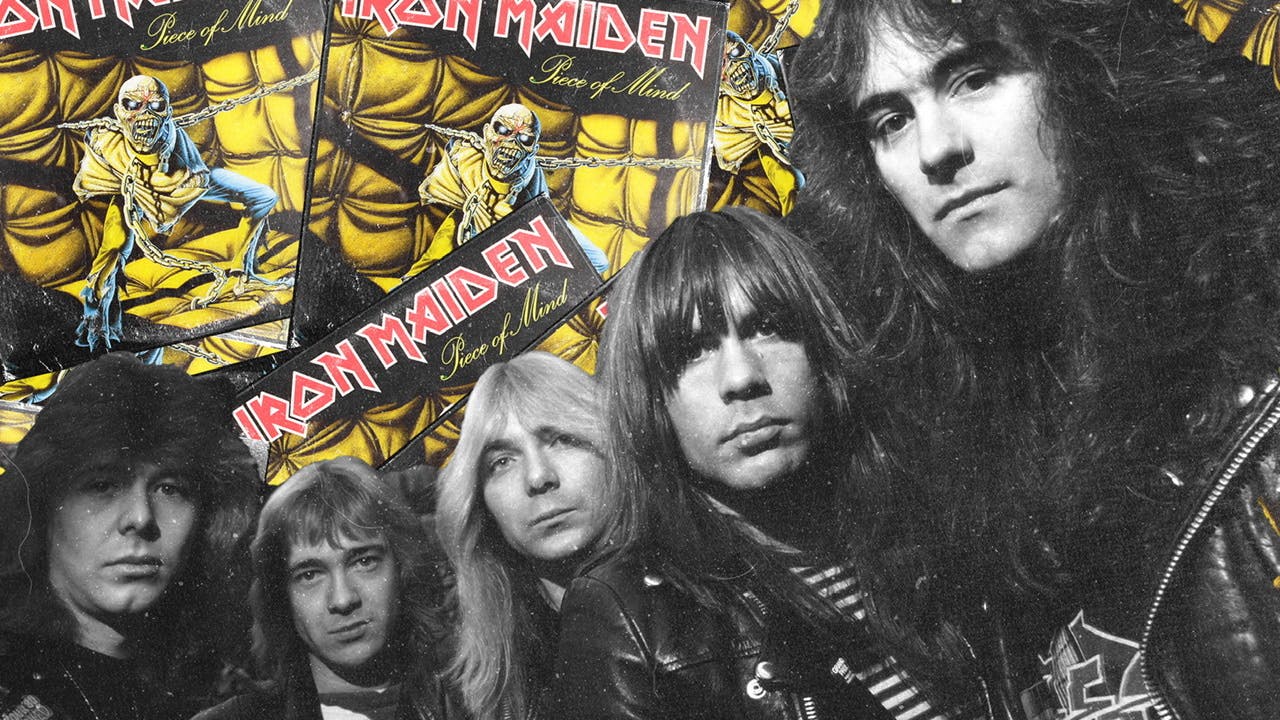 The success of The Number Of The Beast and its accompanying tour had set Iron Maiden up as the biggest metal band in the world – but there was one piece of the puzzle missing.

Drummer Clive Burr had played on the first three Maiden albums, where his tight rhythms provided an integral part of the sound. Go to any Maiden show and you’ll see people air-drumming to the iconic groove of songs such as Run To The Hills. At some point on The Beast On The Road tour, however, something soured. Conflicting stories emerged. Some suggested that Clive was struggling with alcohol problems and that his performances had suffered. He always denied this and claimed that the atmosphere changed when he temporarily left the tour after his father died.

Nicko McBrain, a mad Englishman who supported Maiden in French political metallers Trust, was drafted in as a replacement. When the tour ended, Clive was given the boot and Nicko was given the drum stool on a permanent basis. He’s still there now, in fact, some 38 years on.

Bruce Dickinson once described Clive, who died from MS in 2013, as the best drummer Maiden ever had. “That’s not taking anything away from Nicko,” he said in the Run To The Hills biography. “Technically, Nicko’s probably a far more competent drummer than Clive. It’s just that Clive had this incredible feel, and you can’t learn that, and I regret that he wasn’t given more time to try to sort himself out.”

READ THIS: The story behind Killers by Iron Maiden

Yet as Maiden looked to expand their sound and progress, it was just Nicko’s technical ability and octopus-armed improvisational skill that they needed. For many Maiden aficionados the line-up that went into next album Piece Of Mind – bassist and undisputed band leader Steve Harris, foghorn vocalist Bruce Dickinson, psychically linked guitarists Dave Murray and Adrian Smith, with new recruit Nicko McBrain on drums – remains the classic Maiden line-up.

The first of the four albums that this quintet would go on to record is also regarded by many as their best.

“For me, Piece Of Mind was the best album we’d done up to then, easily,” said Steve. “And I carried on thinking that right up until the Seventh Son… album. I’m not saying the two albums we did in between weren’t good – but Piece Of Mind was just special. It was Nicko’s first album, we felt like we were on a high and you can hear that mood on the album.”

It opened in a flurry of drums as Where Eagles Dare introduced the band’s newest member. It contained what would become an all-time Maiden standard in The Trooper, but it also had the love-it-or-hate-it melodic sweep of Flight Of Icarus and a taste of the more epic things to come in the seven-and-a-half-minute closer To Tame A Land. The Bruce-penned Revelations provided more fuel for the religious right, who’d railed against The Number Of The Beast and were unable to read between the lyrical lines. But it was the presence of a backwards message on Still Life that really got them frothing.

Back in the mid-’80s this stuff was taken seriously – by a certain kind of person at least. The infamous Parents Music Resource Center (PMRC) presented ‘evidence’ to the U.S. Congress that metal bands were using subliminal messaging to encourage Satanism. Judas Priest even found themselves on trial after it was claimed that two young fans entered into a suicide pact after listening to some backmasked messages in their music.

And the message placed in full view on Piece Of Mind? A pure piss-take…

“We were sick and tired of being labelled as Devil-worshippers and all this bollocks by these fucking morons in the States, so we thought, ‘Right, you want to take the piss? We’ll show you how to take the piss, my son!’” Nicko later recalled. “One night the boys taped me in the middle of this [former Ugandan president] Idi Amin routine I used to do when I’d had a few drinks. We thought if people were going to be stupid about this sort of thing, we might as well give them something to be really stupid about, you know?”

The odd blinkered nutter aside, the U.S. really embraced Iron Maiden on Piece Of Mind, and the accompanying World Piece Tour saw the band take huge strides forward, building on the work of the previous album cycle. Their first full headlining world tour, it started at Hull City Hall on May 2, 1983 and included another 21 UK dates before heading to mainland Europe and North America. It was here where the biggest jump was apparent, as the band headlined a string of huge arenas for the first time.

The groundwork paid off as Piece Of Mind became the band’s biggest-selling album in the UK. It didn’t quite get to Number 1 (peaking at Number 3) but K! readers did vote it the Number One Album Of All Time in a 1983 poll, with The Number Of The Beast in second spot. In the U.S. it went platinum, making Iron Maiden bona fide metal superstars.

Adrian Smith also recollects that it marked the start of the band’s transition from wonderstruck, dream-chasing youngsters who were always up for a bit of mayhem, to seasoned, consummate professionals.

Not that there was much evidence of that when Kerrang! joined the band for the last night of the lengthy tour, at the Rock Pop festival in Dortmund, Germany on December 18, 1983. As our reporter said at the time: “Bruce was brilliant, getting utterly smashed after his grade A performance, pissing in garbage cans on the mixing desk, throwing bottles at hotel walls, attempting to leap out of cars at 60mph and, to top it all, getting his privates out during a hilarious Quiet Riot photo session.”

Could this really be the cultured, erudite frontman we know and love today? Apparently so. But the next phase of the band’s career would see all of them having to grow up fast…

Which Iron Maiden album is your favourite? Cast your vote in the ultimate poll now!