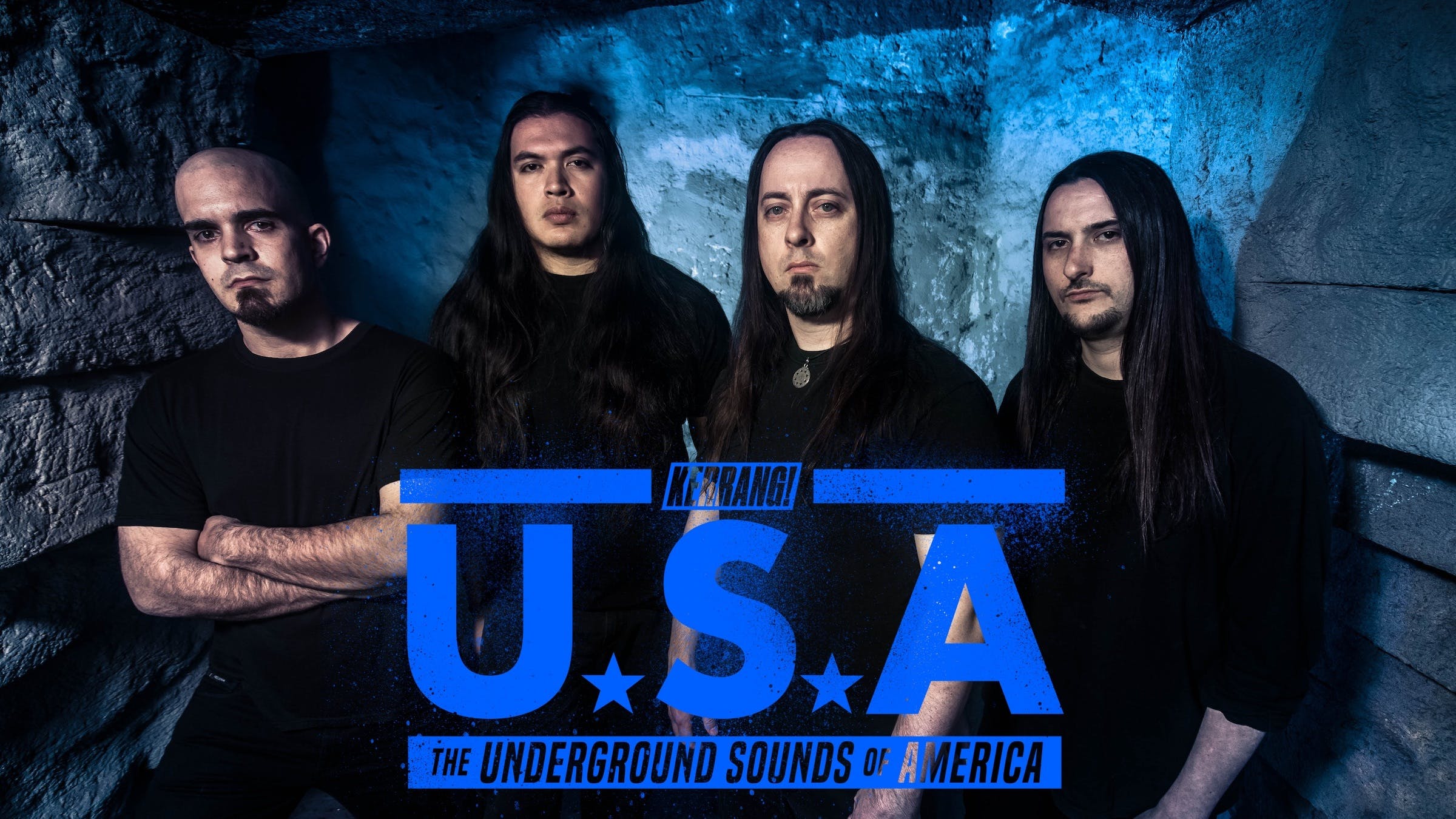 On the surface, Abysmal Dawn is all spikes. The LA-based quartet play the sort of acrobatic, unstoppable death metal that’ll instantly impale the eardrums of the uninitiated listener. But listen through their outright assault, and one can hear the refreshingly atmospheric and powerfully listenable side of the band, using those moments between roiling double bass to give their songs handles onto which even newbies can grip. Though their powerful dynamics make Abysmal Dawn stand out in a sea of death metal bands trying to out-brutal one another, guitarist vocalist Charles Elliot claims this take just comes naturally.

“No method,” says Charles, “we just play what we want to hear. I love technicality, but give me fucking hooks and something heavy over turkey noises on guitars any day. We write songs thinking about how they'll go over live in mind. Live has always been where the band thrives I think. We've received a lot of compliments on our live show over the years.”

This non-method has taken awesome shape on Phylogenesis, Abysmal Dawn’s upcoming fifth full-length album. Frantic yet brooding, powered by both swing and speed, the record is agile in its movement between full-on technical death metal and more misanthropic-yet-listenable moments. Tracks like Hedonistic and Soul-Sick Nation bristle with fury and precision, but it’s in their convulsing breakdowns that the songs truly shine. It makes sense that it took the band six years to get this one out -- and according to Charles, it wouldn’t have been as good if it hadn’t come out when it did.

“I think having a new lineup with people that wanted to be here was the biggest inspiration, honestly,” he says. “When you play with your brothers and not a bunch of business partners, it makes a difference. There's the business of course, but if you don't get along with the people you're in a band with, you might as well just work nine to five. Music is supposed to be fun. A band should be a brotherhood first and a business second. Between finding the joy of being in a band again and having a lot of pent up life frustration, I think we were able to create something special. I don't like putting out records unless they're some sort of improvement, at least to me, in some way. So we put them out on our own time.”

Coming out the other side of the musical meat grinder, we asked Charles what pushes Abysmal Dawn to bloody the waters so impressively.

1) If you had to play a newcomer one Abysmal Dawn track to introduce them to the band, what would it be and why?

That's a tough one. It would probably be between Inanimate and In Service of Time. Those are probably our two most popular songs and they're more on the groove-oriented heavy side of the band's sound. Probably In Service of Time, though. Lyrically, it's probably one of my proudest moments, and I always catch the crowd singing that one back to me. I think it runs the gamut of what we do musically too. There are some blast and slightly tech parts, along with more melodic riffs and breakdown type parts. If I had to go with a newer track, though, it would be Coerced Evolution. That's like In Service of Time on crack.

2) Does Los Angeles or the West Coast in general inform or influence Abysmal Dawn's music, and if so, how?

There are a lot of great things about Los Angeles; it's an amazing city. There are a lot of different parts to it though and different vibes. There are a ton of step-over-your-mother-to-try-and-make-it-big transplants that come here with dollar signs in their eyes. That's sort of given LA a bad wrap but there are good people here, especially the ones that grew up here. That being said, it's a rat rac,e and it's gotten worse over the years with all the gentrification and tech companies moving in. That grind can take a toll on you, and that frustration can carry over in the music. And when it's crowded and you run across people that don't truly value anything but themselves, it can make you misanthropic. It's a time bomb in your head if you don't find some sort of release. Luckily I found music and some of the good people that live in this city over the years.

3) What's one time something went either insanely wrong or miraculously right (or both!) for you on the road?

Just this last run with Vader, Hideous Divinity and Vitriol, we ended the tour with a hometown show in LA. First fucking song James' drum pedals break. At the same time, Vito's guitar keeps cutting in out and making a crackling sound. We have a spare head right on top of the other so we switch it out. It's still making the sound a little but we can play. James is dealing with his pedal with the other drums of the tour at the same time. We have to wait on stage for a good while to fix everything but we recover -- we're pissed, and we barrel into In Service of Time. Shit is feeling good and the show is moving. But something is still wrong with Vito's rig, and I think the last three songs his shit just stopped working. Luckily, our sound guy Daniel was able to make it not sound like a total shitshow, but it wasn't how we wanted to go out in our hometown. People seemed to really enjoy the show regardless, but it wasn't ideal obviously. Shit happens.

If we're talking about things going right by some miracle, that would have to be our tour in South America in December of 2018. I went to the Federal Building the day before my flight to expedite a new passport. The morning of my flight I went to the Brazilian Consulate to get my visa approved just hours before we left. We met Fred Armisen (SNL, Portlandia) while standing in line at the airport and he came to the show in Santiago! Our guitars were almost put on the wrong plane from Chile to Brazil, but we caught it in time. Things could have gone disastrously wrong, but we somehow willed that shit to happen. Still can't believe that tour happened. One of the best times I've had with this band.

4) t's been six years since Abysmal Dawn's last release -- why the wait? What has gone on in those six years?

We toured a lot, went through a line-up change and wrote a new record. We did four U.S. tours, one European tour, and a run of South America between 2014 and 2018, so we never went away completely. I started getting involved in recording as well. But other than that, just life. Fucking life has a tendency of getting in the way when you're making other plans. So we handled our shit and now we're back stronger than ever. Sometimes you just need to take a break.

5) A recurring theme in Abysmal Dawn's artwork is the black orb -- can you tell us about its development, and how it features in each album's lore or themes? Is it a sun? A singularity?

You know, our first demo just had a picture of an eclipse on it. I don't remember if it was my suggestion but Par ended up adding it to the cover of our first album From Ashes. For our second album, Programmed to Consume, he just added that in on his own and we decided to make it tradition and build upon the story told on each cover. So on each cover, it sort of represents something different. But it always represented an ‘end of days’ type thing to me. We aren't the most optimistic bunch.

Abysmal Dawn's Phylogenesis comes out April 17 via Season Of Mist.