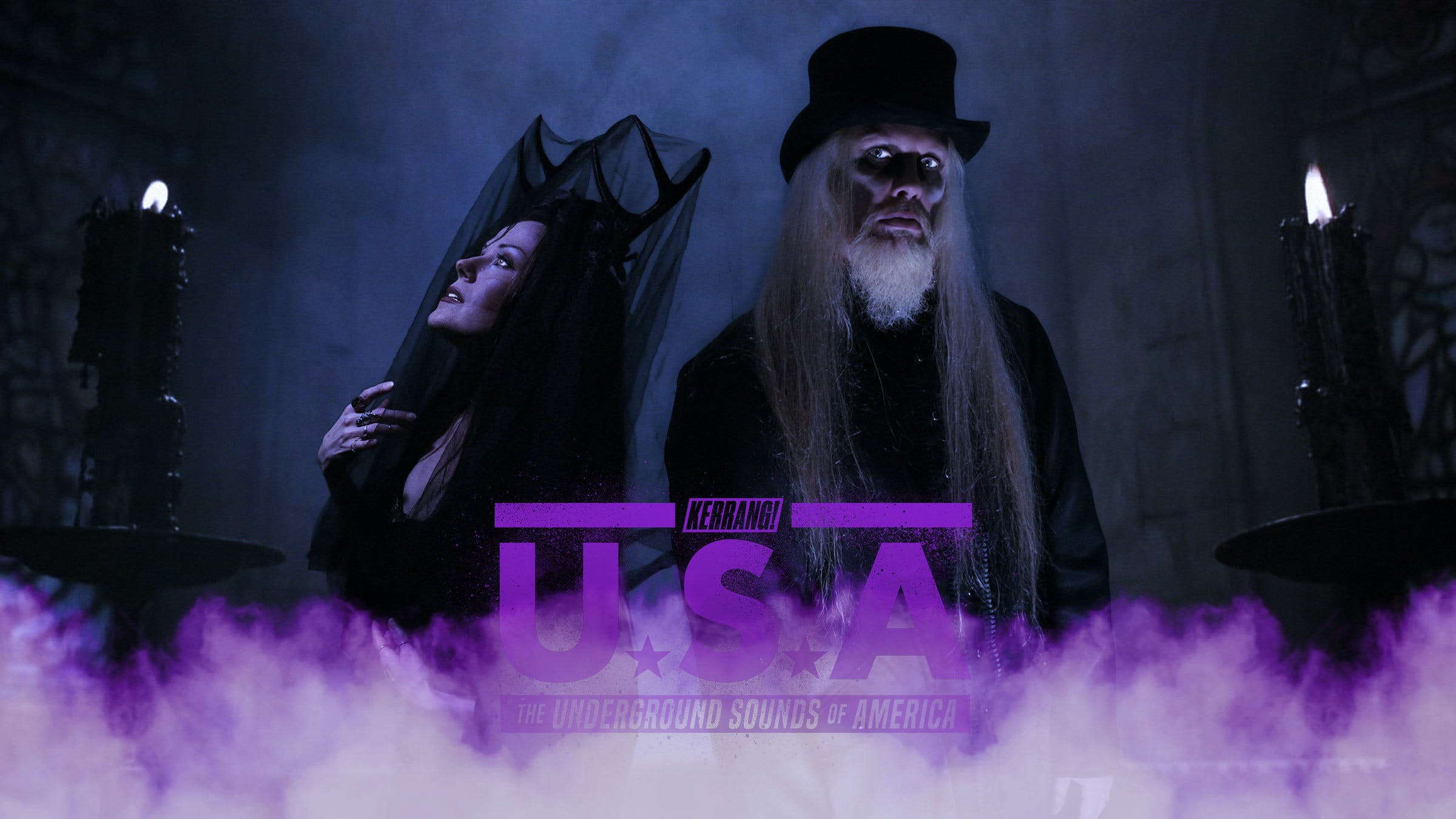 Somewhere up in the mountains above Asheville, North Carolina, Bloody Hammers are writing your favorite new horror-rock song. The husband and wife duo of Anders Manga and Devallia (yep, just Devallia) have released an impressive five albums -- along with a handful of singles and EPs -- in the band’s mere seven-year existence. With an occult-inflected sound that’s part doom and part midnight movie soundtrack, their style ranges from hard-charging rock to somber mood pieces.

“I get disappointed when I buy a record and each song kinda feels the same,” Manga offers. “What I like about old Alice Cooper or Pink Floyd records is that each song has a different style. We try to do that -- take people on a journey with different moods.”

Bloody Hammers’ latest full-length, The Summoning, boasts some of their best (and catchiest) songs yet, which isn’t usually the case when a band is five albums deep.

“I’m kind of a late bloomer,” says Manga, who plays all the instruments on The Summoning -- minus the keyboards, which are handled by Devallia. “I’ve been making music since I was in my teens, but I sucked horribly through my twenties. I’m in my early 40s now, so I’ve gotten better as I get older.”

We recently spoke with Manga and Devallia about their new album, horror flicks and homemade Ouija boards…

1) If you had to play a newcomer one Bloody Hammers song to introduce them to the band, which would it be and why?

Anders: I would probably say Let Sleeping Corpses Lie from the new album. It has the heavy parts, the softer parts, and the melodic parts. It’s a good middle ground, because we have a really hard time staying in our lane. It drives our record label crazy, because we have some dark, moody stuff that’s not really very heavy at all. But I think Let Sleeping Corpses Lie has a little bit of everything.

2) The title of that song and Now The Screaming Starts, the next song on The Summoning, comes from a 1970s horror flick. What draws you to that era?

Anders: When I was a kid, I’d go to video stores and see movies on the shelves that I wasn’t old enough to rent, but the titles were awesome. I remember seeing The Town That Dreaded Sundown at a video store -- it was such a cool title that I thought, 'Man, I have to write a song called that one day.' I didn’t even know how to play anything back then, and I didn’t see the movie until later. But it stayed in my head, and I eventually wrote the song.

3) Are there any songs on the new album based on real-life experiences?

Anders: I lost my sister last year to a drug overdose, so Let Sleeping Corpses Lie is kind of a metaphor for letting go. I actually lost my mom and my sister to opioids. It’s bad down here. I know people are trying to raise awareness, but there needs to be more, I think. In rural areas like ours, there are a lot of people dying. But that song is saying that you gotta keep moving and leave the past behind. Don’t let depression get you, you know? That song and a couple others have a deeper meaning for me, but they’re shrouded in a horror rock façade.

4) What are the pros and cons of being in a band with your significant other?

Devallia: There aren’t really any cons that I can think of, but it’s fun to do creative things together. That’s definitely a pro. We entertain ourselves...

Anders: We’re both laid-back Southern people. We never argue. It’s a really bizarre relationship, I guess. We live up in the mountains in North Carolina, and we don’t really know anybody in this town. We just have each other. The biggest con for us is finding other people to play in our band.

5) We like to ask bands about their hobbies outside of music, but I’m told that you guys make your own Ouija boards. Is that true?

Devallia: Yeah, we do. It got started because we had bats sleeping in our attic grate, and I wanted to build a bat house for them to move to so they wouldn’t be shitting all over our porch. So I built one, and was thinking about building more to sell but I figured out pretty quickly that it wasn’t something other people would wanna buy. So spirit boards became one of the things that we chose to design and build on our own.

Anders: We set up an Etsy store called DrabHaus. We make higher quality carvings for people who like oddities -- and wooden signs for weirdos.

Bloody Hammers' The Summoning drops Friday, June 28, via Napalm Records, and is available for pre-order.