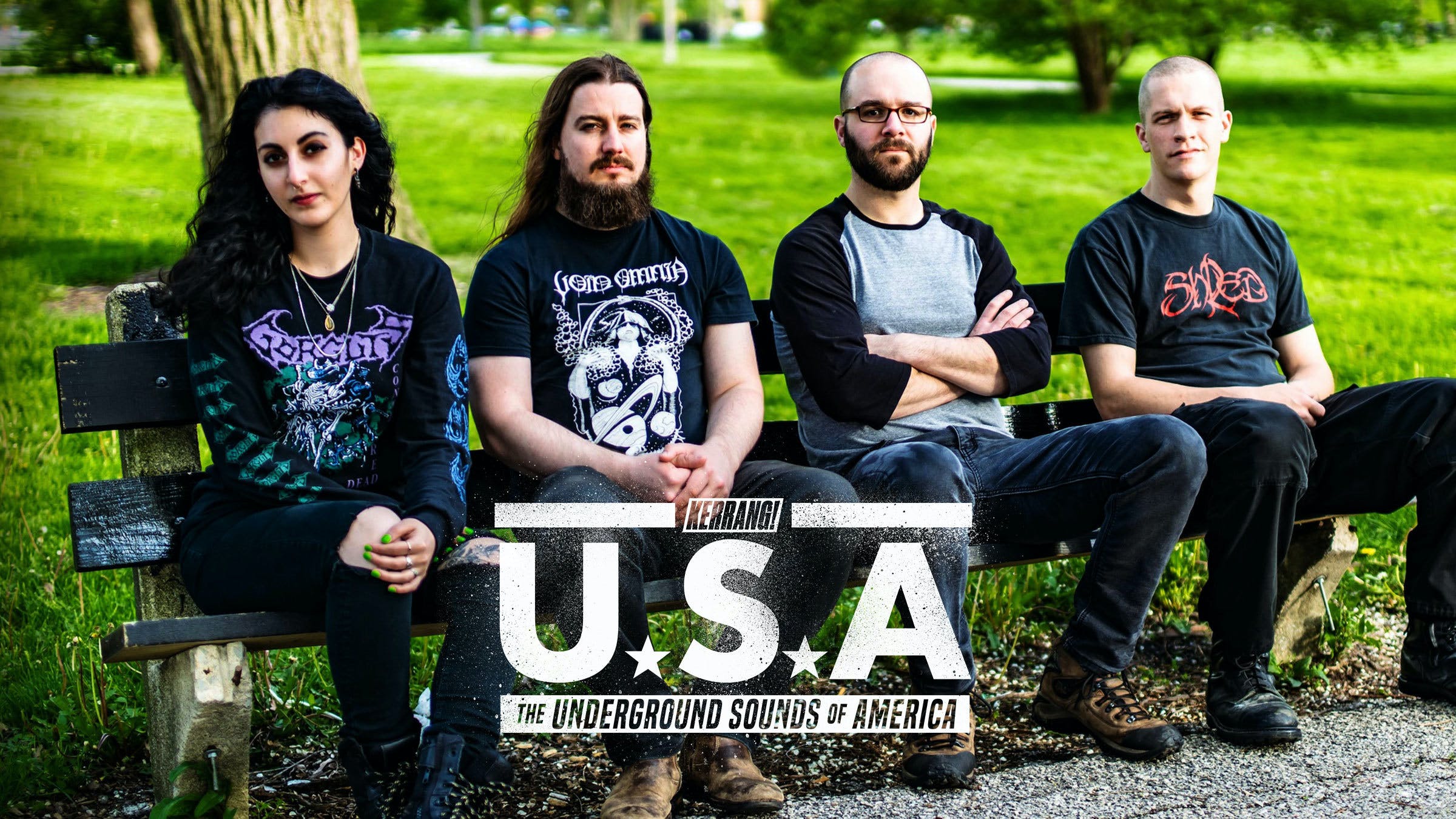 It’s hard to describe Immortal Bird’s music as a specific genre, rather than just the all-purpose designation of 'Brutal shit.' The Chicago-based quartet’s sound has never burrowed itself in one metal niche or another -- sometimes, it’s grinding death metal; others, it’s acidic black metal; occasionally, it’s harsh-as-fuck noise rock. In truth, their ability to move between these sounds is what makes them so exciting -- there’s a volatility to Immortal Bird's music that makes it extra intimidating. The minute you're comfortable, that's when they go for your throat.

“We try to write as organically as possible, but we're always striving for dynamics,” says vocalist Rae Amitay. “At this point, we've had so many microgenre tags thrown at us, we aren't worried about sounding a particular way or engineering a song to be more or less blackened/deathy/grindy/etc. Sometimes I have to challenge myself to make riffs more engaging and fully fleshed out, but Nate [Madden, guitars] is an incredible asset in that regard.”

The band’s upcoming new album, Thrive On Neglect, certainly doesn’t need to concern itself with its severity. From start to finish, the record is a rolling boil of contempt, dismay, and mordant scorn. The album’s second single, Vestigial Warning, is a frenzied whirlwind of blastbeats, pulverizing riffs, and demonic screams. The track sounds a lot like its inspiration: not one immediately point of rage, but every frustration imaginable, coming at the listener simultaneously.

“Vestigial Warnings is essentially railing against multiple stressors, and is meant to be very open to interpretation, especially regarding who ‘they’ are at the end,” says Rae. “‘They'll tell you this is how it has to be. Abandon hope and worship apathy.’ It has a lot to do with being an overwhelmed individual without much optimism, who feels trapped by institutions and ideologies that seem to promise the end of us all. The ‘sickly white, dying still, choir of weakened gasping’ refers to those aforementioned groups, however. They become more invalidated each day, their time grows scarce, but they still have enough power in their death throes to strip people of their humanity, and poison the world -- perhaps irreparably -- with an inconceivable level of self-interest.”

Enthralled by the loathing of it all, we asked Rae about Immortal Bird’s driving ethos -- and, more importantly, awesome dogs.

1) If you had to play a newcomer one Immortal Bird song to introduce them to the band, what would it be and why?

I would either play them Saprophyte from 2015's Empress/Abscess, or Anger Breeds Contempt from our new album, Thrive On Neglect. It's hard to explain or pick one without sounding pretentious or overly analytical, but I just think those two songs encapsulate our overall sound really well. They're vicious, thoughtful, and despondent, and I'm usually at least two of those things at any given time.

2) If Immortal Bird could put together a dream tour, who would be on it?

I don't want to go FULL fantasy on this one...Let's go with the semi-attainable and brutally stacked package of Cattle Decapitation, Inter Arma, and Mare. Y'know what? Let's get weirder and also say Gorguts, The Jesus Lizard, Napalm Death, and Sleepytime Gorilla Museum. That'd be a five-band bill with us included, and I feel like even in my fantasy we'd be first on. It's like when Dwight from The Office talks about how even in his wildest dreams, he'd be co-managing a bed-and-breakfast with Satan in Hell, making 80k a year. Actually, scratch all of that, we'd have the Dillinger Escape Plan get back together and take us out as direct support.

3) What's one time on the road that everything went terribly wrong or miraculously right?

Well, we hate to bring this up, but there was that one time our entire van was stolen with all of our gear and merch when we were only a few days into a US/Canada tour with Withered in 2017. That was, uh, really bad. The most recent time something went miraculously right...I completely blew out my voice for the first time on this last run with Gadget and Cloud Rat, and we happened to have a day off with wonderful friends in Salt Lake City the following day. It was a massive relief to have that recovery time, especially in such a peaceful and pleasant environment.

4) Tell us about working with Dave Otero. What did he bring to the table that you felt aided Immortal Bird's sound?

He makes drums sound better than damn near anyone we've ever heard. He has a resume that speaks for itself. I also appreciated how he embraced the intricacies of our music and put a lot of thought into its production. The day I was supposed to record a certain song, I felt some type of way and scrapped 100% of the lyrics and completely rewrote it. Dave was a great help with vocal pattern/placement ideas in the 11th hour, and I'm stoked on how things turned out (with that song, but also in general)!

5) A recurring theme on your Instagram is you hanging with rad dogs. Does playing and touring with Immortal Bird provide you the chance to hang with many awesome dogs? Is there a dog you've met in this band that you will never forget?

We've met so many phenomenal dogs (and cats) on tour, it's a joy to reflect upon. There are so many unforgettable pups, but there is one in particular that I thought of immediately when you asked this question, though. We were in Louisville in April 2016 with Pyrrhon, sitting outside of the venue before our show. A guy walked up with an eight-week-old German Shepherd. Game over for me. It was so cute...so fluffy...so adorable...so baby...that I actually cried. I had the opportunity to play with him, and afterwards I just sat back down, still in tears, unable to form words. It was the cutest puppy I've ever seen in my life. I'm almost losing my mind right now thinking about it.

Immortal Bird's Thrive On Neglect comes out this Friday, July 4th, on 20 Buck Spin, and is available for preorder.