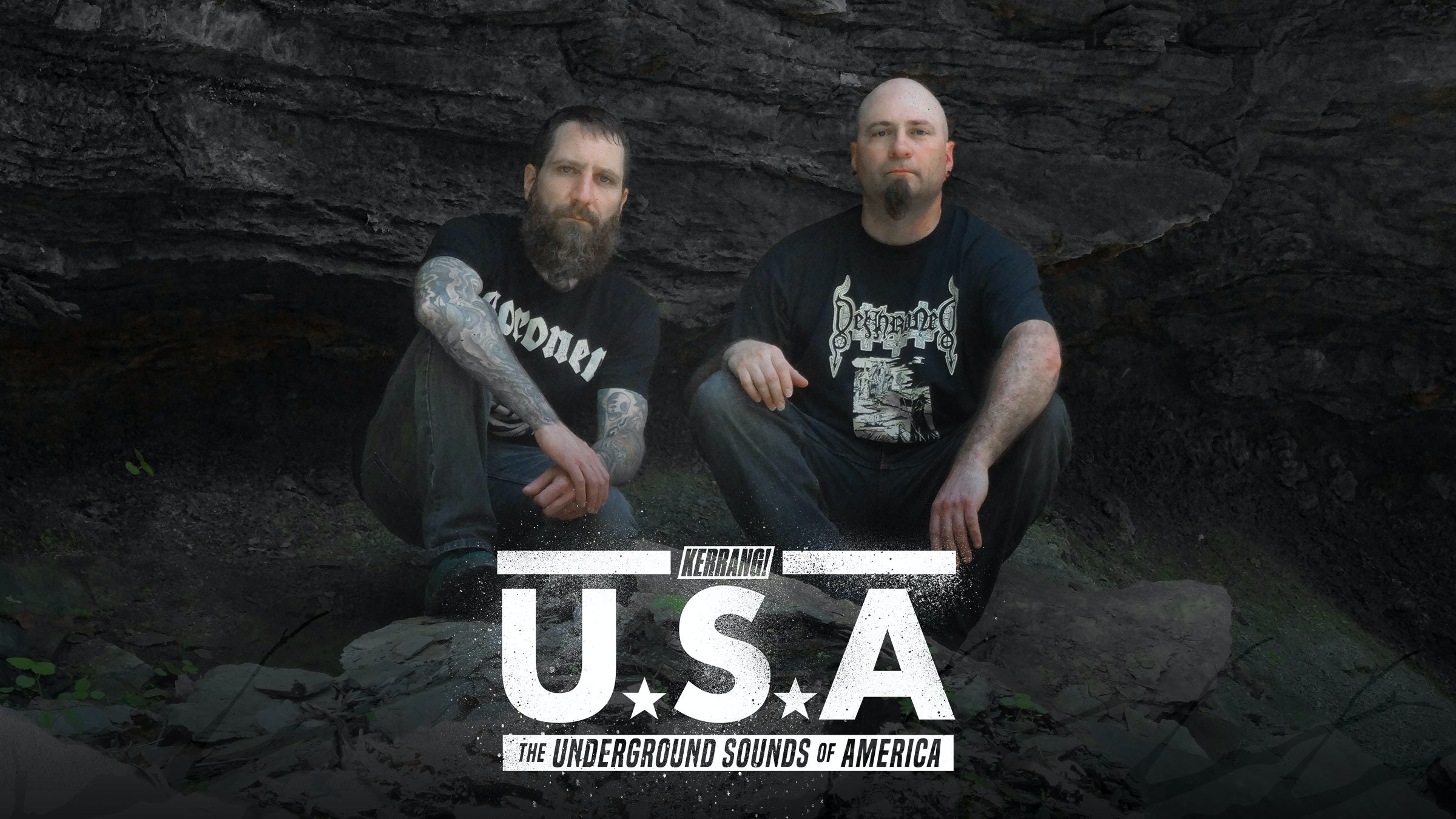 Black metal isn’t the kind of music most people want to listen to around a campfire with friends, but West Virginia’s Nechochwen might change that. The two-man band merges glimmering Appalachian folk music with atmospheric black metal to create a woodsy musical hybrid that’s both dulcet and empowering. But unlike many metal acts who incorporate folk elements into their sound, Nechochwen don’t play at being drunk Vikings, and don’t just add folk to metal or vice versa; instead, the band pays homage to the lore and atmosphere of their home, and intertwines metal and folk effortlessly to create music that’s strikingly organic.

At least, that’s how it sounds -- though if you ask vocalist, guitarist, and keyboard player Aaron Carey, there’s more hard work to this balancing act between folk and metal than meets the ear.

“I struggle with it constantly,” says Aaron. “Eventually, it naturally works itself out but the difficulty is more in finding a balance over the course of an album rather than in individual songs. I write most of the riffs on an acoustic guitar and usually these parts become distorted riffs on an electric. Sometimes for months, all I come up with are classical and acoustic parts and I start considering whether we should release another acoustic album, like our debut, Algonkian Mythos and let them flow naturally rather than pairing them with heavy riffs. The amount of metal parts is increasing with each album and we are continuously trying to find the right balance.”

Aaron’s struggle is paying off. Nechochwen’s new career-spanning compilation, The Ancient Pulse, is an eerie collection of songs that evoke the brooding vastness of the forest. And while many songs are almost entirely beautiful folk music, tracks like Winterstrife and Charnel House blaze especially bright with the moments of energetic extreme metal that flare up in sweeping crescendos. As either purely folk or metal songs, the tracks would be entertaining; the incorporation of both makes them enthralling.

But according to Aaron, though Nechochwen’s merging of sounds has suited them well, it wasn’t intentional.

“I never wanted to fuse bluegrass or country with metal even though those styles are associated with West Virginia,” says Aaron. “although I did study the structure of folk songs in college and used a bit of that in songs like On the Wind and October 6, 1813. Thinking about the prehistory of West Virginia with its mounds, stone walls, and the more recent violent history along the Ohio River puts me in the mood to write music and it comes out sounding how Nechochwen sounds, blended with the metal I grew up listening to and the classical guitar studies I did in college.”

Fascinated by their unique sound, we reached out to Aaron to figure out how Nechochwen creates such a stunning two-headed monster.

1) If you had to play one Nechochwen song for a new listener to introduce them to your music, what would it be?

2) Who are you five greatest musical influences?

3) What are you most passionate about besides music?

Being a dad to an awesome kid. I'm also passionate about being in nature, teaching, and studying and preserving local Native history. Until recently, I spent a lot of time in nature. I grew up hunting, fishing, camping, backpacking, et cetera, and have been interested in expanding my awareness in nature and learning primitive skills for a very long time. Lately, I have been teaching and performing classical and fingerstyle acoustic guitar gigs frequently while working on a Master of Education degree. I miss being outdoors all the time and having the time to study local history, especially frontier and prehistoric history of the Upper Ohio Valley.

I think folk music was always around in some form but it wasn’t like, “Hey man, let’s hang out this weekend and listen to folk music!” My friends and I were always looking for the heaviest stuff we could find. I learned to play the banjo out of necessity for a teaching job but later learned about clawhammer and frailing on the banjo and even found some West Virginian songs about relatives of mine. This style worked its way into some Nechochwen riffs, including some that I haven’t released yet. I would say that I am much more influenced by the Appalachian music of Algonquian and Cherokee origin. The acoustic and classical guitar music that I write is influenced by many composers from Europe and the Americas as well as fingerstyle players like Michael Hedges and Phil Keaggy. I’ll admit that it’s an unusual mix of influences, but I did not grow up hearing a lot of folk music (and own only a handful of albums I would consider folk) and I have heard a variety of eclectic styles that I liked along the way.

5) How has being from West Virginia informed or influenced Nechochwen’s sound?

I grew up in the country and there wasn’t a lot to do when I was younger, so I practiced guitar and listened to music a lot. I talked constantly with my friends about certain bands -- there was a mystique around some bands being from remote, forested areas of Europe and how these bands somehow conveyed where they came from in their music. This and the depressive elements of doom bands appealed to me more than bands that focused on gore, politics, or religion. I liked bands like Amorphis and Master’s Hammer in the early 90’s and then the Scandinavian black metal bands, of course, that took isolation, folklore, and frozen forests to a new level. It was easy to develop a fascination with faraway places like Finland, but I knew that there was enough dark history and grim landscapes in our own backyards in West Virginia to write important music here, too.

Nechochwen's The Ancient Pulse is out now on Nordvis. Purchase it here.

5 movies and TV shows to ease you into December

From deep dives into metal culture to deep space exploration, there's a lot to watch this week…