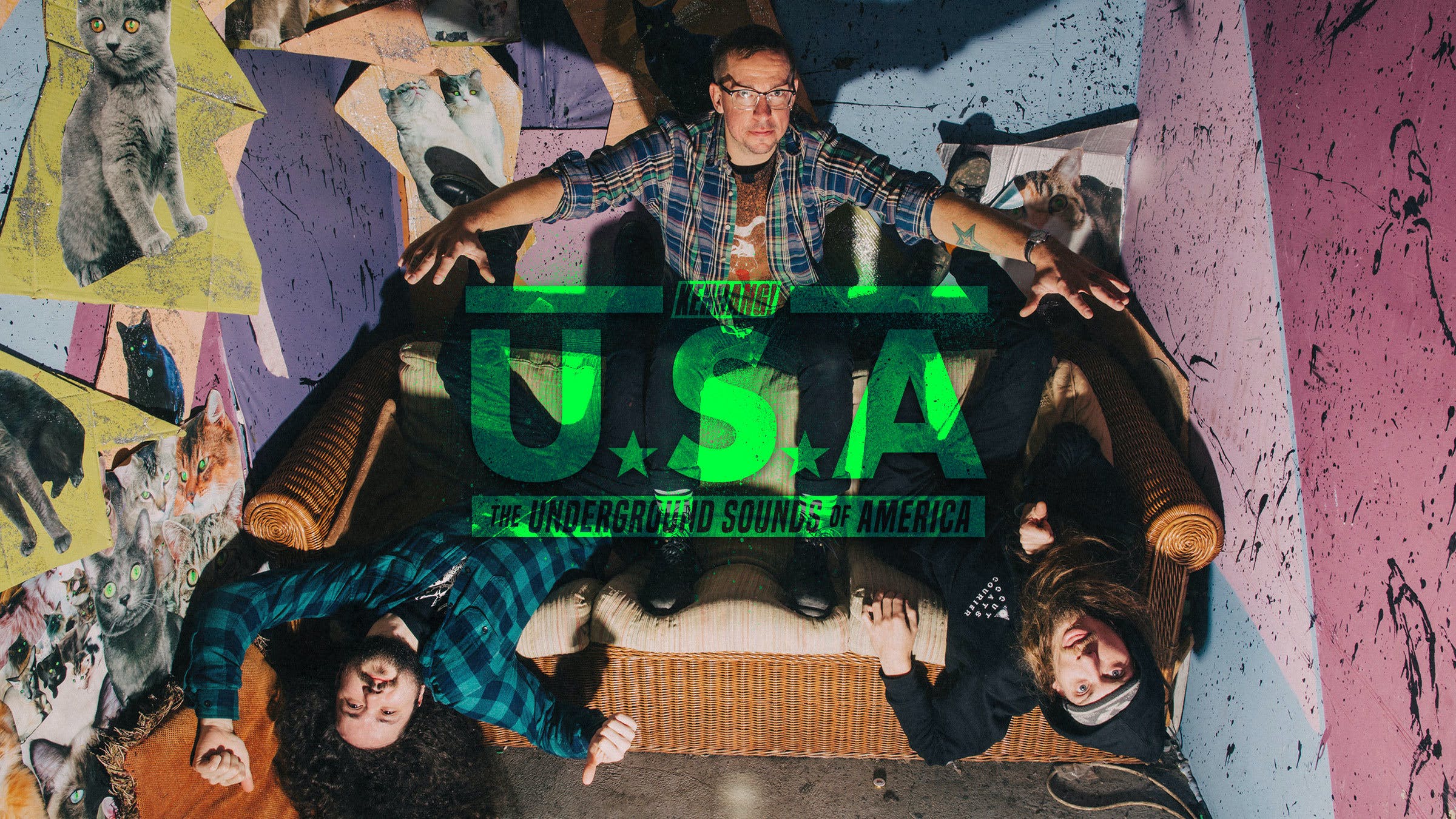 In Oozing Wound’s world, only posers act like they’re not extremely worried. The Chicago-based alternative thrash crew's new album High Anxiety blazes forward with harrowing riffs, frantic drumming, and strained shrieks, merging old-school thrash with aspects of noise rock and black metal to create a sound all their own. But for all their command of this awesome new sound, a sense of urgency and cynicism bleeds through at every moment, searing away the confidence and bravado of old-school metal in return for a raw, honest, sense of panic.

So what exactly is it that Oozing Wound are so anxious about?

“Literally everything?” answers guitarist/vocalist Zack Weil. “How about the mass-level extinction going on around us? Global Warming? The rise of fascism, racism and totalitarianism? The continuing revelation that almost every man with any level of power is disgusting and likely any artistic hero will soon be exposed as a piece of shit? My student loans that I don't think I am ever going to pay off, or the fact that I will likely never own a home? Maybe that the internet, though obviously amazing, has ruined most forms of art or at least the ability to make a living off of it? There's honestly so much to be freaked out about.”

This sense of feeling attacked on all sides is part of what make Oozing Wound arguably the most relevant thrash act out there today. While so many bands either focus only on the positive or go after easy, lofty targets like religious institutions and phantom bullies, the Wound seem to be lashing out at real-life enemies and aggressors that fans in 2019 know all too well. Tracks like Tween Shitbag bristle with hostility towards the fake commodity of rock'n'roll cred, while Birth Of A Flat Earther spews venom at flat earthers and other people who would have you put your faith in ignorance for the sake of following them.

“Samuel Shenton was the founder of the Flat Earth Society and the Zetetic Society, and also happens to be the number one person you can blame for all this flat earth bullshit,” explains Zach. “Before we actually started launching crap into space, he was heralded as an intellectual, but by the time the moon landing came around he could only get lecturing jobs for children who all ended up laughing at him. He truly believed we were being lied to, and yet, he like everyone else who insist on this version of the world, cannot ever give a reason as to why this would be so...These are people who ignore real, actual problems because they'd rather focus on whether a floating orb is actually a floating plane. It doesn't matter. How about Universal Healthcare, assholes? I wrote the song from Shenton's perspective of believing he is making valid points, but ultimately being undone by things like facts and reality.”

Trying not to freak the fuck out about the mounting issues of the world, we contacted Oozing Wound to find out what goes into making such awesome music with its hackles perpetually up.

1) If you had to play a newcomer one Oozing Wound track to introduce them to the band, what would it be and why?

As much as I love our songs like the little bitty babies they are, I am definitely partial to the new jammers. Tween Shitbag is a great start because it should chase away the riff-raff with its alternating 6/8s and 7/8s. Try headbanging to it! For that classic Oozeness, though, it's hard to go wrong with Call Your Guy, which summed up everything we needed to say and then some.

2) How has being from Chicago informed Oozing Wound's music?

This ain't a city for pretending and posturing, that's for sure. Those jokers eventually move to New York to pursue their fake realness or to LA to live out their real fakeness. In the midwest, it is more about being true to yourself, which for us is being gross and loud and maybe not trying to write songs for everybody. The history of bands, especially in the noise rock lineage of Big Black or Jesus Lizard, is where we view ourselves. It is not quite RIO levels of abrasiveness, but it's not radio fodder either.

As a band: Nirvana, High On Fire, Jesus Lizard, ABBA, and let's say DEVO as a wildcard fifth. I have always found this question difficult, because these aren't necessarily the bands that we listen to a lot or anything, but sound-wise I think it's a distillation of these things. We get compared to Slayer fairly often, but truth is, we barely listen to them ever, if at all. We hardly listen to metal at all anymore. It just does not really excite us, but there is hardly anything as fun to play. I try to write things I think are as catchy as ABBA, as deconstructed as DEVO, as heavy as High On Fire, as tormented as Jesus Lizard and as cathartic as Nirvana was to me as a teen. We're probably failing at that, though.

4) What aspects of the new album are you most excited for people to hear?

I think we finally nailed the sound on this one. Matty Russell – the engineer on our first three records – really helped us hone in on what the best aspects of our band are, but I think it really helped having an outsider recording us this time. Gregoire [Yeche, engineer] did a great job and these songs sound absolutely pummeling in a way that maybe only Retrash does. A big part of that is probably recording at Electrical Audio again. It is the best sounding place I know of. Beyond that, I think we got a better crop of songs this time around. All seven of these little oozers sound like they could be a single or something. I know that Whatever Forever had some moments that slowed the pacing down and a few years on, there's some stuff I would do differently. High Anxiety is likely going to be hailed as either a return to form, the next big thing, or another brick in the ooze wall.

5) What's the worst thing that's ever happened to Oozing Wound at a show or on tour?

We've blown tires, broken strings at the worst possible moments, arrived hours late to gigs, been locked out of Airbnbs… I once even willed the engine of a van we rented to die because I hated it so much. But the worst was the 36-hour nightmare trying to get home from Milhous De Festa in Portugal.

We got rerouted in the air because of a massive storm which put us in Boston in the middle of the night. We got stuck on the tarmac for five hours, so by the time we got off there were no flights, hotels, or food anywhere. Kevin managed to find tickets for another flight back to Chicago in Maine, but we had a really small window to get there so our drum boy at the time, Casey, went and rented a car for, like, $1,000 because they wouldn't let us rent it for just a few hours, it had to be for four days or some crazy shit. So we did it because we were delirious, hungry, and had jobs to get back to. We drive real fast and actually make it there in time, drop off the car keys at the rental spot and run into the airport. Kevin tries to check in, and… there is no flight. Whatever system he bought it on created a fake flight due to over selling or some shit. Either way, now we're at a different airport, we don't have the car anymore because we dropped the keys and there isn't a flight.

I started panicking because I'm sleep deprived and haven't eaten anything for almost a day. We miraculously find a flight to Chicago, but it is back in Boston where there hadn't been a flight earlier. So, Kevin and I take a cab to a bus and ride back to the airport we left four hours before. Casey, who lives in Wisconsin, got a different flight back to Milwaukee, but his flight got grounded for maintenance and so he got stuck for a while longer. Kevin and I did manage to finally make it home but it took roughly 26 hours longer than it had been meant to. And that, hopefully, is the worst tour experience we ever have.

Oozing Wound's High Anxiety comes out this Friday, March 15, on Thrill Jockey Records, and is available for pre-order.

Make sure to get worried as hell while catching Oozing Wound live at one of the following dates this year: