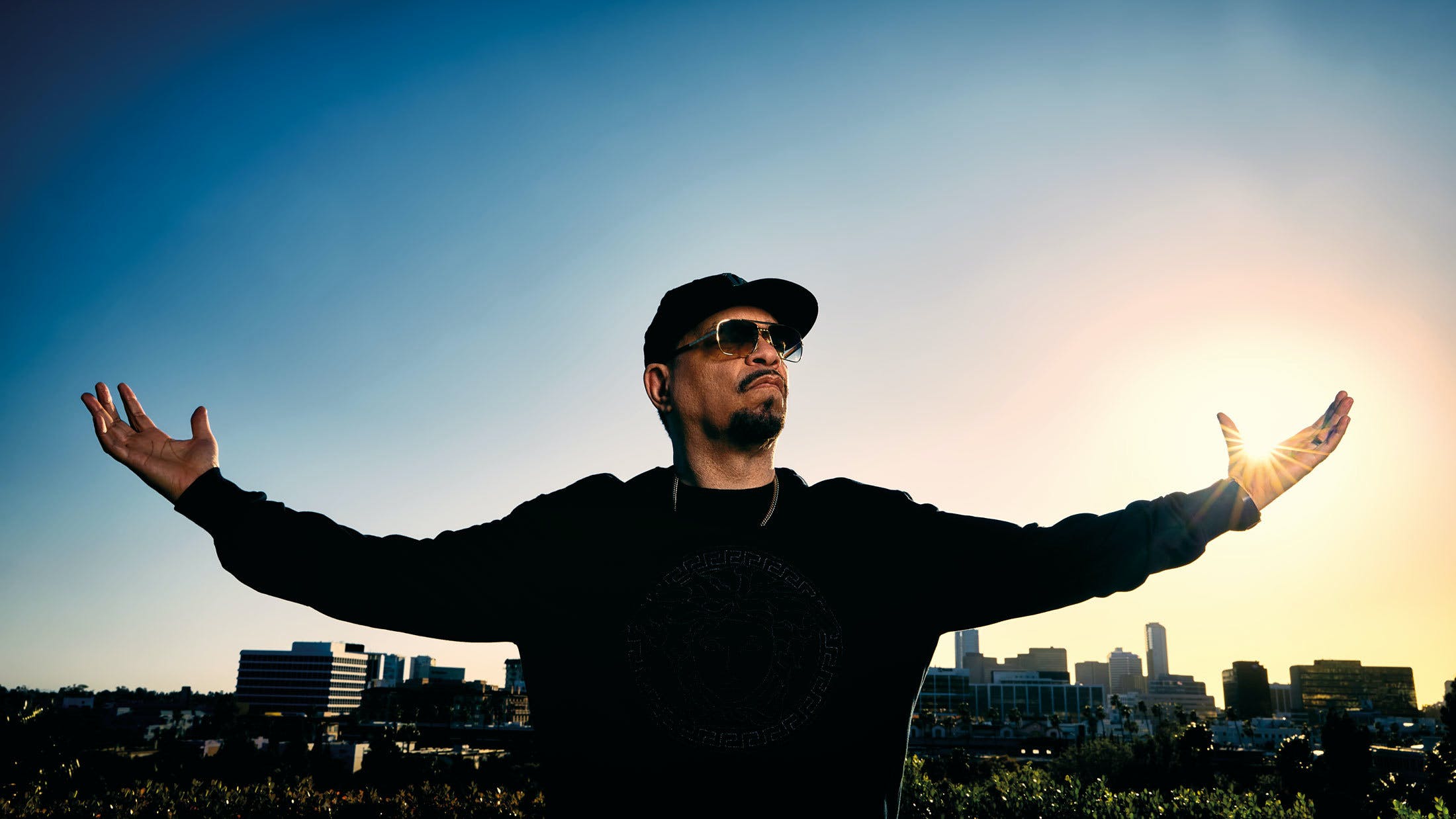 There are few people in the world of rock’n’roll who live up to their name as perfectly as Ice-T does. Cooler than a chilled beer on a hot summer’s day, he has been there, done that, and come out the other side looking… well, cool. Maybe it’s the voice, that distinctive timbre, recognisable in an instant as belonging to no other, but more likely it’s that he has lived a life like no other.

Born Tracy Lauren Marrow, in Newark, New Jersey, February 16, 1958, he moved, at the age of 12, to live with his aunt in South Central Los Angeles after the deaths of his parents, and grew up in the heart of gang territory. By 17 years old he was out on his own, selling weed and stolen car stereos to make ends meet, before joining the U.S. army as a means of escape. Despite going to military jail for his involvement in the theft of an infantry rug, and going absent without leave, he received an honourable discharge in 1979, returning to a life of crime, including pimping and robbing jewellery stores.

Like so many others from the wrong side of town, Ice (who earned his nickname by reciting the works of author Iceberg Slim) could have easily ended up incarcerated for the rest of his life. Instead, when many of his friends were sent to prison, he decided to make his name as a DJ and then a rapper, winning an open mic competition in 1982 and ultimately becoming a platinum-selling artist in his own right. Not content with dominating one genre, he formed the metal band Body Count in 1990, stoking controversy with the song Cop Killer on their self-titled debut album, and later worked with legends as distinguished as Slayer, Motörhead and Black Sabbath.

Oh, and then there’s an acting career that has seen him in everything from New Jack City and Tank Girl, to 30 Rock and Law & Order, playing roles as diverse as a cop, a kangaroo and er, a cop again. He had his own successful reality show, Ice Loves Coco, with his wife, former model Nicole ‘Coco’ Austin. And while it may only be 13 miles from South Central to Hollywood, the gulf between the two is far greater. Ice-T has bridged it on his own terms. If anyone knows a thing or two about the ways of the world, it’s him…

“Celebrity is objective. You could be a major tennis player, but because I don’t watch tennis you could walk by me and I wouldn’t care. Never confuse notoriety with respect. If you put a grapefruit on television every day for an hour, at the end of the month you could rope it off in Times Square and people would take a picture with it. It’s an interesting concept, but it’s all objective. I don’t think there’s anybody that everybody likes – even Jesus had haters!”

“I don’t have a problem with anybody’s eating habits – I have a problem with anyone who pushes their eating habits on other people. If you’re vegetarian, if you like meat, or you’re a vegan, God bless you. But I think vegans are psyching themselves into thinking they’re not harming things. On [2020 Body Count album] Carnivore, I’m explaining that humans eat life – we eat things that are alive. Plants are alive, and if you’re eating them for health reasons, I understand, but if you’re eating them to make yourself feel better then you’re psyching yourself out. The title Carnivore is really saying that humans are bloodthirsty, and we should stop denying it.”

“I’ve stopped talking about him. I’ve even stopped saying his name, Beetlejuice-style. I don’t think there’s anything else that can be said about him that hasn’t already been said. He’s the ultimate troll. He just wants to be focused on, so I don’t like validating him by saying his name. We already know what type of person he is. He’s like an arch-criminal and Batman has to go after him now. He operates like a gangster, based on loyalty, and now he’s on a revenge path because of the impeachment enquiry, and he’s got everyone scared. He’s a motherfucker!”

“I realised early on that Twitter is just a huge chat room, and when you follow somebody it means you might be interested in what they say. It gives me a way to reach my fans. With Twitter I can reach out and sometimes engage in conversation, but then you’ve got the occasional dumb fuck who just wants to say something stupid. I have fun sometimes, replying to them. I call it target practice. When you’re on social media you’re talking to the world, and some people care what you say and some people say dumb shit.”

“The ’hood is just another word for the ghetto. But if you live there then it’s not so much the ghetto – it’s your home. Some kids live in the suburbs, and that’s their ’hood. But LA is a very interesting place, because most people get off the plane and they head north. They cross Wilshire Boulevard and they don’t see the 40 square miles of black people and Hispanics. It’s basically a low income area, and the world isn’t so much racially segregated as it is economically segregated. If you wanna get out of the ’hood, you cross Olympic Boulevard and the rent jumps $800! If you cross Wilshire, it jumps another $1,800! I knew a guy from Norway, a journalist, who was only paid $600 a month, so he was staying in a room in the back of a house in the ’hood. As soon as he got there it was, ‘Who’s the white boy?’ Later on he became ‘the white boy’, then he was ‘my man’. When he made it to ‘my n***a’, that’s when he knew he was safe. Once everybody realises you’re on the same playing field, like, ‘Hey, I’m as broke as you,’ then they’re cool. Racial hatred isn’t really an issue. They don’t have enough time to worry about white people, they’re worried about surviving. The crazy thing about South Central is you can see the Hollywood Hills. You can see where the money is.”

“I believe we’re all the same age, because you’re either alive or you’re dead. None of us know our due date. I know Kobe [Bryant, the basketball star who died in a helicopter crash at the age of 41] didn’t expect to go. I plan on living until I’m 100. I checked my schedule and I didn’t see a funeral in there. I’m healthy and I’m still touring, and I’ve got role models like Mick Jagger, Iggy Pop and Ozzy Osbourne still out there, banging it. Music is the fountain of youth. Age doesn’t have anything to do with it. It’s all about attitude.”

“I come from a background with no love. I’m an orphan – I lost my parents by the time I was 12 years old. I left my aunt’s house when I was 17, and I’ve been on my own ever since. I haven’t dealt with any living relatives, so love was something rare. I’ve had my heart broken on many occasions, whether it was guys who I thought had my back, or a girl that I might have really dug and it didn’t work out. But love is the safest place, because it’s like bliss. I’ve got a little daughter and she looks at me and kisses me, and I can’t find a better feeling than that.”

“I watch so many shows about it, and they say that the thing that will take out most of the population will be some form of the flu. Like coronavirus or whatever. I’ve never seen a movie about the future that wasn’t post-apocalyptic, it’s always like, ‘Okay, we’re restarting life because we fucked up!’ I don’t think anybody’s written a movie where everybody’s happy in the future. I think we’re headed towards a weird place. When I was born there weren’t even cellphones or flat-screen TVs. Thinking about my daughter’s life and what she’ll witness as she grows up, there’s gonna be lots of wild shit going on. But I don’t know where we’re supposed to be. [Legendary producer and musician] Quincy Jones told me, ‘If you wanna lose a fight, fight the future.’ I think we’re all stuck in our ways, because that’s what we’re familiar with, but I’m not here to say what’s right or wrong. New things will always seem odd. I watch a lot of Black Mirror. That shit is fucked up!”

“You have the freedom of speech – but watch what you say. You have the right to say anything, but if you’re using someone else’s platform to say it, then they have the right to control it. If I say something crazy and put it on social media, they can take it down. There’s always gonna be some form of censorship, so don’t be surprised at the ramifications of what you say. If you wanna say something bad about gay people, don’t get mad when they attack you back. They have that right. And if I wanna sing Cop Killer, I can’t get mad if the cops get angry. Freedom of speech is not completely free. You’ve gotta pay tax on it.”

“There’s always something going on behind the scenes, but I’m not into all that. Some of them might be right, but sometimes the simple answer is the right one. Take this flat world shit – for the world to be flat, there’s gotta be so many compounded conspiracies, like every satellite that’s taking pictures and every space probe, they’d all be in on it and everybody’s lying! What’s the benefit of lying about it? Flat earth has got to be the dumbest one!”