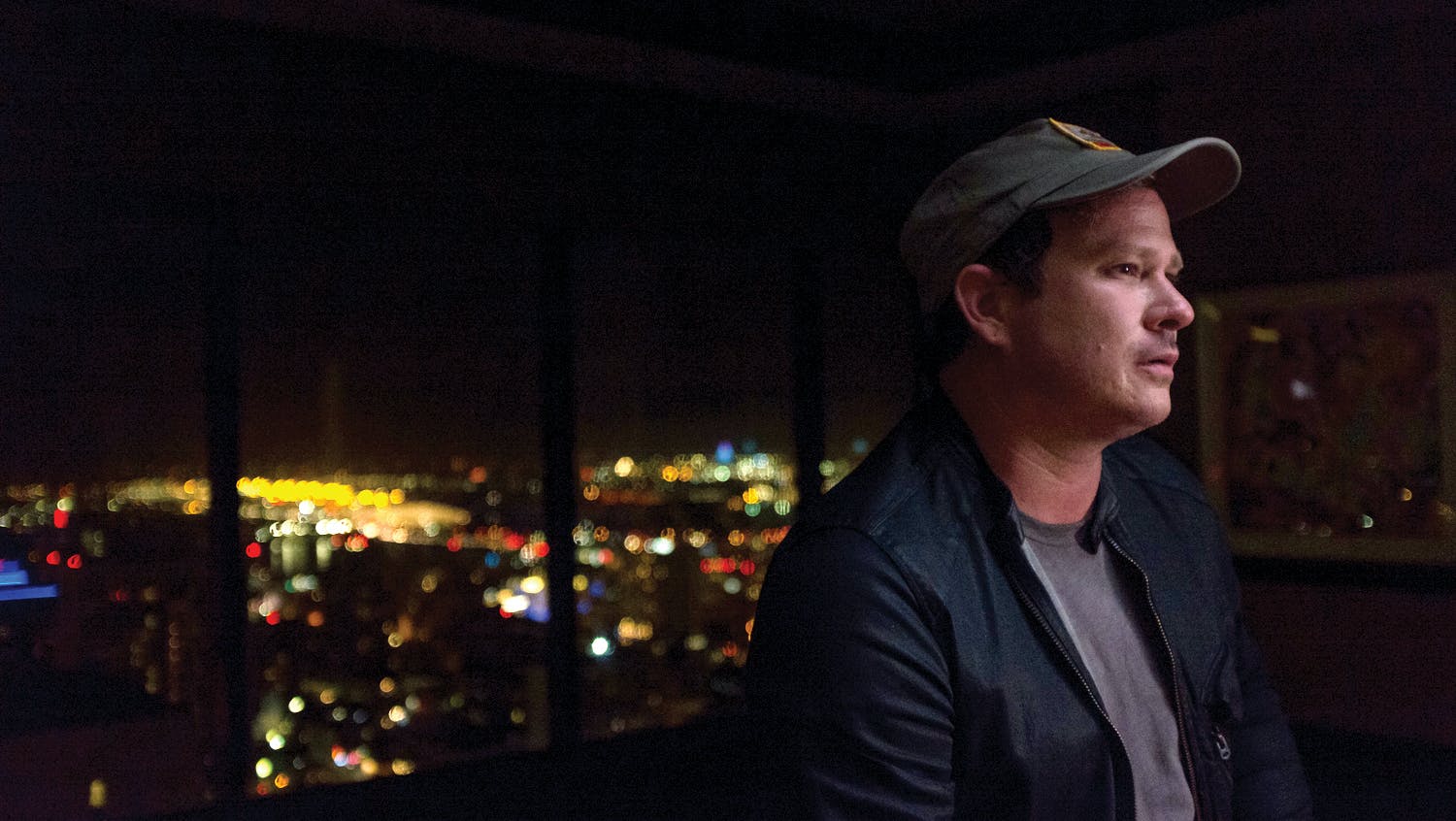 "I grew up with two passions,” says Tom DeLonge. “One was music, and one was this.” That this he’s talking about is his lifelong obsession with UFOs, of course, a passion that took a back seat for a reasonable chunk of his career in blink-182.

But it’s a passion that never left him. After leaving blink the first time in 2005, Tom went on a spiritual journey that involved shutting himself away for weeks, culminating in the launch of Angels & Airwaves, a band he once boasted would be the greatest in the world and bring about a musical revolution. Such enormous, grandiose claims were followed by equally monstrous, sweeping space-opera concept albums, which arguably didn’t quite match his promises, commercially or critically. Some incredibly ambitious plans didn’t come to pass, it seems, but wheels started spinning and ideas were set in motion for where Tom, now 43, finds himself today. Not that the grandiose claims have been left behind.

“Once I felt like I’d conquered music,” he says, “I wondered if there was a way to jump in and try to conquer this subject a little bit, at least with some credibility.” He set up a company for trans-media projects around Angels & Airwaves, which has over time evolved into his To The Stars Academy Of Arts & Science, an outlet that proclaims itself to be ‘a revolutionary collaboration between academia, industry and pop culture to advance society’s understanding of scientific phenomena and its technological implications’.

It’s a complicated offering – part entertainment corporation, part private technology company, part… UFO investigation outlet. Imagine if Elon Musk fronted a band, produced films and wanted to harness alien technology and you begin to get a sense of the scope of Tom’s ambitions.

To The Stars, in addition to handling all of his creative projects, employs a large amount of academics, former government agents, aeronautical engineers and biotech experts. The goal is to investigate UFO phenomena, figure out how to utilise technology that might be taken from them, and to educate the public about top secret government programmes and interactions with craft of extraterrestrial origins.

Those are eyebrow-raising aims, and it would be easy enough to think Tom had simply swapped his Atticus baseball cap for a tin-foil hat because he had made so much money that he’d let his imagination run away with him. But ever since a front-page New York Times story in 2017 (Glowing Auras and ‘Black Money’: The Pentagon’s Mysterious U.F.O. Program) revealed that the U.S. government have invested millions of dollars into the Advanced Aerospace Threat Identification Program, investigating unexplained aerial phenomena and logging incidents involving interactions, his mission has been vindicated.

READ THIS: Tom DeLonge: "Every artist is insecure about what they're creating"

A new Tom-produced documentary series, Unidentified, recently aired on the History Channel, followed insiders and experts as they examined government awareness of these phenomena. Further revelations have come out that are claimed by Tom to be direct consequences of To The Stars’ work, and earlier this year, the U.S. Navy announced new protocols for pilots to report encounters with UFOs. Then there was this.

“We’ve taken the subject out of the basement of the Pentagon and brought it to our elected leaders,” he says. “I never in a million years thought I’d make any traction like this. It’s one of those points in life where everything has come together, and the next thing you know, you’ve stumbled into a flowing river that’s pushing you down a canyon, and you don’t have much say anymore. It’s pretty insane.”

Tom’s career transition hasn’t received unanimous support, however. There has been a lot of online sneering with every new development, as people struggle to get their heads around the idea of the guy who once sang juvenile songs arranging clandestine meetings with government whistleblowers to discuss matters of international importance.

“The credibility question is a totally valid one,” he concedes. “Like, ‘Why are these guys that are Nobel nominees, people from the highest levels of the intelligence community in the U.S. government, CIA, and Department Of Defence, talking to this guy Tom?’ I totally understand questioning that.”

He is, however, adamant that his role makes perfect sense to everyone involved. He’s there as an entrepreneur, he says, as a guy who can offer a voice to people with information that they don’t know how to share, and who can ensure that publicly discussing a subject as taboo and stigma-ridden as UFOs isn’t a “career-killer” for people coming from positions of governmental authority.

READ THIS: 11 songs about aliens and UFOs that are out of this world

It turns out there are other advantages to having a company headed up by a rock star trying to do something that hasn’t been done before. The same kind of unconventional, out-of-the-box thinking that made Tom a household name works just as well when applied to large-scale investigative projects as stadium-filling choruses.

“What Tom brings to the table is something that none of us in the government had – it’s not about his star power or popularity, but his intellect,” says Luis Elizondo, former head of the aforementioned Advanced Aerospace Threat Identification Program, who left the organisation in protest at what he considered insufficient work being done to address threats posed to national security by UFOs. He now works at To The Stars.

“Tom has a very creative, very unique way of looking at problems,” he believes. “Most of us from government backgrounds have a binary way of solving problems. We approach things conservatively. A guy like Tom? Forget about a bull in a china shop, he’s a hand grenade in a crystal punchbowl!”

“I don’t have any security clearance I have to abide by,” says Tom. “I can be creative, outspoken, and an engine that’s always running. Now I work with people who are good at making sure I’m running in the right direction. Otherwise I would just run and run, and bulldoze anything that’s in my path.”

Interestingly, Tom doesn’t see his music career and his work with To The Stars as separate entities – a large part of his vision includes using entertainment to further the global conversation about UFOs.

“How do we bring public outreach, scientific study and new technologies together?” he asks. “How do we galvanise the public? How do we include them? And how do we bring these unknown technologies out to the world to better humanity? I can’t do all that stuff, but there’s nobody in government that’s strategising how to make movies, documentaries and books. This is one of those subjects that’s going to raise the hairs on the back of people’s necks.”

READ THIS: Every blink-182 album ranked from worst to best

Hence the documentary, and Tom’s upcoming TV show Strange Times – a paranormal skateboarding drama based on his 2015 graphic novel. He sees his role partly as aiding the global discussion about UFOs. He cites a conversation between Luis and members of the Italian government that could only take place because Tom had set up a company that allowed Luis to share what he knew, without rendering himself unable to work.

“They wanted to meet him and talk to him about his experiences, not meet Tom DeLonge, you know?” he says, seeming to relish his role as a facilitator for those privy to secrets about nighttime goings-on. Unidentified aerial phenomena are being discussed, and as far as he’s concerned that can only be a good thing.

It’s very probable that Tom will be involved in UFO research for the rest of his life. Whatever happens with Angels & Airwaves and his other creative outlets, it doesn’t look like his passion for looking to the skies is going anywhere.

“There’s no real endpoint,” he says. “We’re talking about studying nature – it’s not like we’ll ever learn everything and just stop. There’s no endpoint to technological breakthroughs. What I want to do is create a company that’s robust enough, and has the resources, to do what governments usually do.”

“Look at the internet – the government created it, but then Google came in and now look at them. That’s my goal.”

In any other era, revelations from the Pentagon that UFOs are real enough that there are now rules for what to do when the military encounter them would be the biggest news story in the world. But we live in tumultuous times, overshadowed by day-to-day politics and division. Tom, as much a dreamer as a businessman, sees a potential and necessary end to that division, though. Entities from another world would transcend political borders and force some kind of global unity.

“It’s imperative that the world comes together over this,” he says. “We might find out one day that our ancient religious stories are connected to this, or that these visitors, whether they’re life-forms or robots or whatever, might be playing with the social engineering of the planet. If there’s been some type of influence on us – even if it’s not bad – then that calls on all countries to ask, ‘Who are we? Where did we come from? Where are we going? How do we get there together?’”

It sounds almost like sci-fi utopia – the whole planet coming together to answer enormous existential questions. Can the world really be united in peace, harmony and intellectual exploration by the guy who ran naked through LA in a pop-punk band?

“This is everywhere,” says Tom. “It’s an international issue. What are we going to do about it? A lot of people ask me, ‘Is it all bad? Is it all scary?’ And no, it isn’t. This is one of those times in the history of the human race where it really can pull us together. There’s no other choice, and that excites me.”

It’s hard not to feel at least slightly stirred by the scope of Tom’s dreams and the scale of his ambition. He and the team he’s put together might end up discovering knowledge that has eluded mankind for millennia. They also might not. There are certainly much worse ways to spend those pop-punk millions.

Angels & Airwaves’ upcoming March tour has been cancelled: “We are absolutely gutted to not be making it back overseas this spring, and are working on returning as soon as we can…”