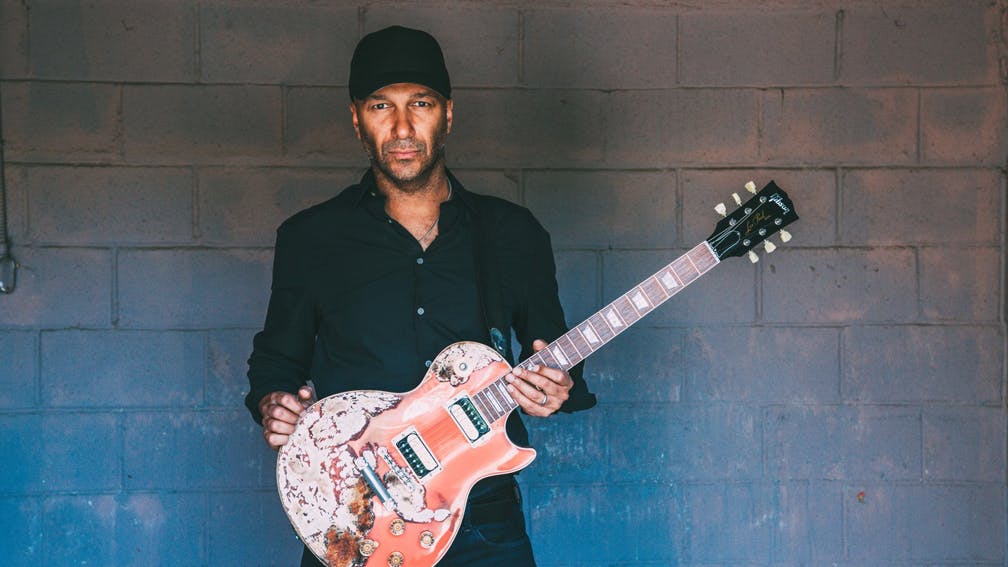 Let’s not beat around the bush – Tom Morello shits out riffs for breakfast that most musicians would be grateful to write just once in their career. Strip away any of his songs down to just the guitar and you’ll hear a master at work, sowing seeds of change into the unholy noise booming out of the same Marshall head and Peavey cab that’s sat behind him throughout most of his career.

Rage Against The Machine – Killing In The Name

If ‘Fuck you I won’t do what you tell me!’ are the immortal words chiselled into the very cornerstone of Rage Against The Machine’s legacy, it’s because they belong to one of the greatest build-ups in music history. The riff that explodes towards the end of the song, despite its four chorded simplicity, funky shuffle and notable lack of distortion, is everything that censorship busybodies PMRC had been fearing – rap aggression taking up arms with metallic rebellion to pinpoint the failure of the American dream. The world was never quite the same after.

Talking to this writer in 2018, Tom admitted if there was one song he wanted to be remembered for, it would be the lead single off their game-changing 1992 debut. “It’s the one that continues to have the visceral impact everywhere from South Korea to Johannesburg. I still hear it everywhere I go… and of course I’m very happy about that.”

Rage Against The Machine – Bullet In The Head

With its nuclear mix of homemade police sirens, anti-governmental lyrics and hip-hop bass lines, RATM’s follow-up single was equally as damning of the so-called ‘free world’. In many ways, these songs were the soundtrack to the 1992 LA Riots happening around them at the time of recording.

If there are notable similarities between the carnage unleashed by the whip of Brad Wilk’s snare near the end and the breakdown in early Tool song Cold And Ugly, it may be because Tom and Tool guitarist Adam Jones were classmates at Libertyville High School, Illinois, and started their first band, Electric Sheep, together.

Rage Against The Machine – Wake Up

Anyone that’s seen The Matrix will remember how its dramatic finale gets torpedoed into the end credits by RATM at their deadliest. It’s a moment of minimalist perfection – a single chord getting beaten to within an inch of its life as one single lead note machine guns itself up and down half a step. ‘I think I heard a shot!’ cries Zack as all hell breaks loose again halfway in – igniting with the kind of hellfire only this band could ever conceive.

Rage Against The Machine – People Of The Sun

You’d be forgiven for not realising it’s a guitar that introduces the mayhem that unravels within Evil Empire’s second single. The shrill, almost sample-like noise comes from Tom scraping an allen key against his fifth string – one of many life hacks the visionary has employed over the years to invent his own hybrid sound. Other party tricks include pulling his instrumental cable out and buzzing it against his bridge, using his toggle as a killswitch and scratching with his strings through a wah pedal instead of turntables. By his own admission, the man thinks like a DJ as much as he does a guitarist.

Rage Against The Machine – Snakecharmer

Snakecharmer certainly sits among the stranger tracks among RATM’s three albums of original material, straying from the template that worked so well on the bigger singles. Its grungy verse builds in intensity and reaches boiling point with a bloody nosed hook that’s as much Metallica as it is Black Sabbath.

Master architects of violent endings to their uncompromising noise, the track sits in their finest melodic exits – disintegrating into feedback as Zakk repeats the words ‘Interested in you!’ like he’s stuck in a trance.

Rage Against The Machine – Born Of A Broken Man

The sixth track from The Battle Of Los Angeles champions Tom Morello at his most crushing. The eastern mysticism of its Jimmy Page-inspired intro draws you in before the distorted detuned guitars swell and hammer you sideways. Making the riff heavier still are the four punches that sit in the middle with the kick drum, bass and guitar pounding together in a Bay Area-rivalling fit of metallic rage.

More personal than political, it sources a different side of aggression from Zack De La Rocha – the voice of a haunted son whose student mother was left no choice but to struggle after his artist father left. “We had no money,” commented the singer in 2000. “It was so unfair what he did to her, and what he did to himself. His work inspired me so much but it’s like… you gotta put food on the table.”

As far as opening gambits go, this was a blinder. Cochise proved a Chris Cornell-fronted RATM was every bit as tantalising as it sounded, harnessing his Robert Plant-esque wail for their urgent grooves while giving us a taste of how they’d dabble with the darker, moodier rock he was known for during the middle eight.

And – in case you were wondering – those helicopter-like noises during the intro were made by Tom drumming on his strings with a pencil through a delay pedal. Any doubts of Audioslave living up to the hype were silenced in three minutes and 42 seconds of gravity-defying rock. It was very much mission accomplished.

Tom Morello generally doesn’t play doom metal. But actually, he kinda does on this deeper cut from Audioslave’s debut – it’s driven by a biker heaviness that stands shoulder-to-shoulder with anything Zakk Wylde has recorded over the years, while perhaps also paying tribute to Chris’ work in his former band. Truth be told, it’s as Soundgarden as Audioslave gets – which is no bad thing at all…

“He had a very wonderful and unorthodox songwriting talent,” remembered Tom in the aftermath of the singer’s untimely end. “It was sort of part-Beatles, part-Black Sabbath, but he had this internal non-4/4 time signature clock in him that was really interesting, and it’s in some of those Audioslave songs where he would contribute chord progressions.”

After Chris Cornell’s exit from Audioslave, which the singer attributed to “irresolvable personality conflicts as well as musical differences”, the guitarist’s next moves were to start a band with Boots Riley from Oakland funk rappers The Coup – which brought him back to America’s biggest stages opening for Nine Inch Nails and Jane’s Addiction on their 2009 NINJA tour. Street Sweeper Social Club’s one EP and studio album may sit among the more obscure collaborations over Tom’s career, but the soul-charged potency songs like Ghetto Blaster remain strong to this day.

Prophets Of Rage – Strength In Numbers

Having grown bored of police sirens and helicopters, Strength In Numbers treads new sonic ground for the guitarist – this time making his instrument cluck like a chicken. Then there’s that earthquake-inducing riff, eschewing his trademark 4/4 feel in favour of something pushing on odd-time, in a way that sounds as if a CD is skipping. Just like Cochise for Audioslave, it’s a song that deftly welcomes and exploits the wealth of talent coming into the fold with the core three.

The final track from Tom's 2018 solo album The Atlas Underground enlists Wu-Tang Clan legends GZA and RZA, as well as Herobust, in its devilish whirlpool of dubstep, Jimi Hendrix chords and distorted bass. While it would be impossible to top the onslaught of ground-breaking guitar work on RATM’s debut, the songs that make up the LP are the mark of a man still firmly rooted in rebellion, continually finding ways to think outside of the box and blow our minds with wild inventions.