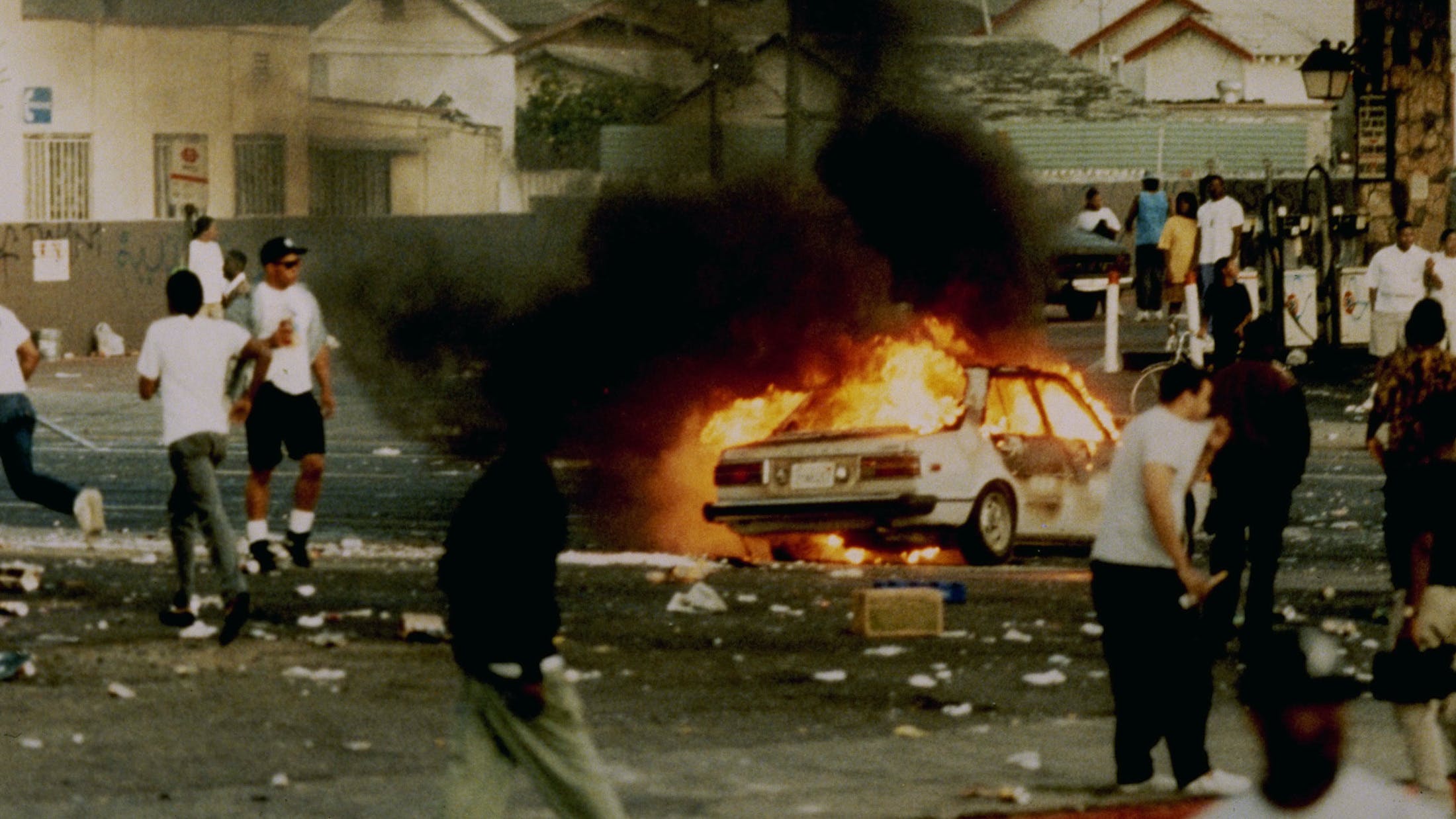 On April 29, 1992 – 28 years ago today – a jury acquitted four LAPD officers of charges relating to the arrest of construction worker Rodney King. King had been tasered and beaten with batons by LAPD officers during an arrest. Many Los Angeles residents of the time have claimed that such treatment was not uncommon but this time there was a difference. At a time before smartphones had put video cameras into millions of pockets, the arrest was recorded by a local man using a camcorder on his balcony.

The recording made worldwide news and the behaviour of the police drew widespread condemnation. When all four officers were acquitted of assault and three of using excessive force (the jury failed to agree a verdict on a fourth charge of excessive force, which amounted to the same thing), Los Angeles erupted. For six days the city burned and there was widespread looting and disorder. By the end of it, 63 people had reportedly died, more than 2,000 had been injured and more than 12,000 had been arrested.

The Rodney King verdict was the spark that ignited the flame but there were simmering tensions long before then.

FEVER 333 frontman Jason Aalon Butler, who grew up in Inglewood in in southwestern Los Angeles County told French website Rock Ur Life: “This man gets beaten on a camera and people get acquitted for that. It’s fucked up, no question. But below the surface there was frustration, relegation, subjugation, racism. All these different structural disadvantages that Black culture was feeling for so long. It was only a matter of time before it was gonna boil open. The moment just snaps it. Like in France, the oil price went up, but it wasn’t just the oil price... It was all the frustration French people were having and oil was just a spark. Rodney King was like that for me.”

Body Count, the LA rap-metal outfit fronted by Ice-T, had written the now notorious Cop Killer the year before as a response to police brutality.

Ice-T told Kerrang! earlier this year: “When we wrote Cop Killer, I was in rehearsals singing Psycho Killer by Talking Heads, and my drummer Beatmaster V, rest in peace, said we need a cop killer. He’s like, ‘Cops are out there killing people, doing their bullshit, and getting away with it.’ And this is before Rodney King, but it was happening in the hood – we knew it and we felt it.”

Released a month and a half before the verdict and subsequent riots, Cop Killer name-checked Rodney King and was adopted by many as an anthem of revolt. It was also targeted by the powers that be in the aftermath, in an attempt – many believed - to deflect attention from issues such as police brutality and the root causes of the rioting.

“At the end of the day, Cop Killer was basically authority killer,” Ice told us. “People don’t like authority, that’s really what it is. And that’s the core of rock‘n’roll.”

Indeed, the ’92 riots had a galvanising effect on the more revolutionary end of the musical spectrum. Hip-hop luminaries including Ice Cube and Dr. Dre addressed the riots directly but so did the likes of UK rap-metallers One Minute Silence on Stuck Between A Rock And A White Face, and political LA punks Bad Religion, most notably on Don’t Pray On Me from their classic 1993 album Recipe For Hate. Fellow Los Angeles residents and rapcore pioneers Downset took aim on the track Anger, which also referenced the death of frontman Rey Oropeza's father at the hands of the LAPD: ‘I hate L.A. swine with a passion gee / 'Cuz my pops was killed by the fucking LAPD / Yes they killed my daddy, yup they killed my daddy / And if I don't blast 'em back / You know they gonna fucking kill me.’

Machine Head’s Real Eyes, Realize, Real Lies included sampled news reports and interviews from around the riots, while A Nation On Fire from the same classic album (1994 debut Burn My Eyes) dealt with the reverberations that were felt throughout California and beyond.

Frontman Robb Flynn told Kerrang!: “The LA riots had just happened, after the Rodney King trial, and those riots happened everywhere; they happened all over Oakland and all over Berkeley.

“I literally rode my mountain bike into this riot that was happening on Telegraph Avenue, because I wanted to feel alive and absorb this crazy moment it time. It was insane! There was people lighting cop cars on fire, and tear gas between protesters and police. I got chased by a gang of protesters and then went right into a gang of police, and they were chasing me. I’m literally pedalling for my life and people are taking swings at me. It was crazy. After that, all of those lyrics for A Nation On Fire just came pouring out.”

Sublime’s late frontman Bradley Nowell also provided a first-hand account, this time of the actual LA-centred riots, on the track April 29, 1992 (Miami). Admittedly he got the date wrong in the song itself but the ska-punks kept the mistake in because it was the best take.

‘April 26th, 1992, there was a riot on the streets / Tell me where were you ?/ You were sittin' home watchin' your TV / While I was participating in some anarchy,’ he sang, before going on to detail his crew’s looting spree.

There were and still are complex race-related issues at play, but the period did see an unprecedented coming together of cultures and musical genres. Other bands had dabbled in bringing rap and rock together, including the aforementioned likes of Body Count and Downset. Not to mention Aerosmith, who had collaborated with Run-DMC on the crossover remake of their song Walk This Way - and turned out to be one of the more surprising acts to be inspired by the Los Angeles riots, writing Livin’ On The Edge about the period.

It was, though, Rage Against The Machine who really nailed the form. While most of the tracks on their eponymous 1992 debut album had already been featured on a demo the previous year, they were forged in the same building tensions and exploded in the aftermath of the riots, perfectly capturing the spirit of the times.

“No one was more surprised than I,” guitarist Tom Morello told The Telegraph of the band’s huge success. “I didn’t think that Rage Against the Machine would be able to book a club show (in the beginning). Music was ghettoised. It was an apartheid-type world, racially and musically. Black music was played by black people; white music was played by white people and never the twain shall meet. There was no thought that Rage Against the Machine could be anything more than four guys in a rehearsal room.”

A lot of bands followed in their wake and one interesting artefact from the period was the soundtrack to the ’93 film Judgment Night, featuring a series of collaborations between hip-hop and rock and metal artists. Arguably the best was Slayer and Ice-T’s Disorder – a raucous medley of three songs by UK punks Exploited, with the chorus to the song UK 82 being changed to ‘LA 92’ to reference the riots.

Some bands also took inspiration from the riots without singing about the events directly. Released in 1995, Fear Factory’s Demanufacture was a landmark slab of drilling industrial metal. It was also a science-fiction concept album with a man-versus-machine theme, but the inspiration was taken from real-life as much as it was from The Terminator.

Looking back at the period around the album’s conception, vocalist Burton C Bell told The Indian Express: "We were struggling to survive in Hollywood then. We experienced the LA riots first-hand. We remember the National Guard patrolling the roads of LA, setting up post at the 7-11 across the street. This was not science-fiction, this was pure struggle. But these are the experiences that create science-fiction; because we were struggling, we were fighting the establishment; the machine."

Beyond its impact on the music of the time, the period would have an enduring effect on the politics and worldview of younger artists in the making.

The Bronx frontman Matt Caughthran, for example, was 13 at the time and getting ready for a night at the theatre to see Phantom Of The Opera with his family when the verdict came through. Cancelling the outing, Matt’s father placed guns in easy reach throughout the house instead and prepared to hunker down. “From the safety of our home, surrounded by our well armed father, we watched the riots go down,” the singer told Kerrang!. “That was a dark day for LA; it was super fucked-up. I wasn’t an adult at that point, but I knew how fucked up it was.”

Asked whether it introduced him to the notion that chaos can quickly descend on even the most apparently civilised of places, he responded: “100%, absolutely. I kind of knew it already but I didn’t know it on the scale of the riots. The riots were a big deal. So you can say a 100% that that’s true.”

Jason Aalon Butler was even younger but is just as much a product of his environment and its history.

Speaking about his introduction to politicised music, he told Colorado Springs Indy: “Well, I’m from Inglewood in Los Angeles, where we’re kind of immediately introduced to disenfranchisement. It’s almost synonymous with our local system and our perspective on things. When you’re from these places that are underserved or underprivileged, you just ask questions. So growing up there prompted me to do that early, and then I found things that spoke to that. Things like N.W.A., a lot of gangsta rap, a lot of West Coast rap. And when I was around 10 years old, I got into punk rock and then, of course, Rage Against the Machine, who were directly speaking about these political and economic issues.”

While many of the questions raised by the 1992 Los Angeles riots would appear to remain unanswered in a time when it still needs to be stated that Black Lives Matter, there’s no doubting that it was a historically important period with cultural and musical reverberations that can still be felt today.