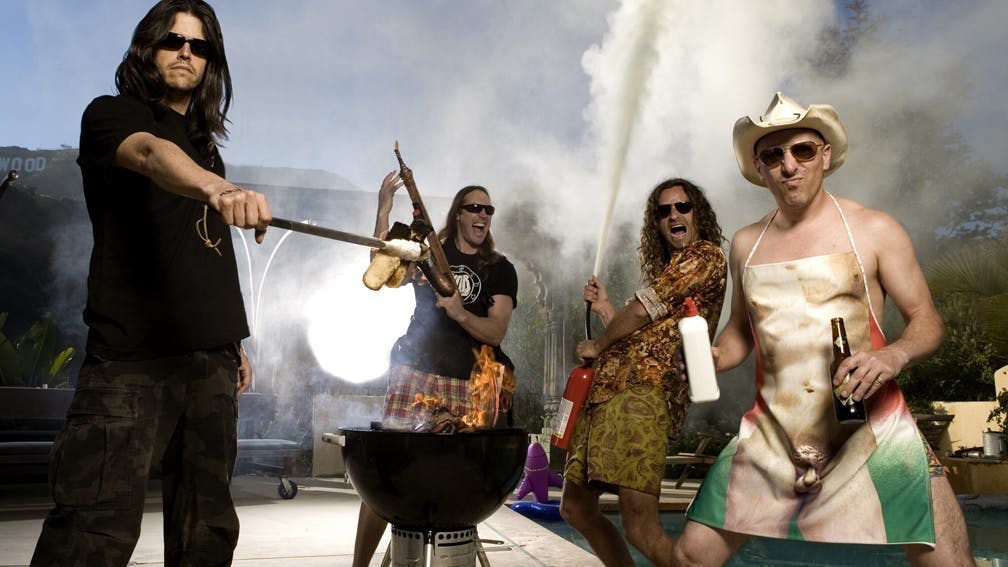 This week sees the release of one of the most anticipated rock albums of our time: Fear Inoculum, the first new release in 13 years by California progressive metal act Tool. The lead-up to Fear Inoculum has been so hotly watched that the band’s desire to take their time and do things at their own pace has become a meme unto itself. In the eyes of cynics, waiting for the album was a snipe hunt — the search for a coveted animal that never existed — and now here we are, getting ready for it to drop this Friday.

To consider Fear Inoculum’s mounting hype, and the special place Tool has in the hearts of their fans, one must consider all of the rumors, false starts, and ideated fantasies that have sprung up during the 13 years people have been waiting for it. At any given moment, fans had a brand new zany notion about Tool’s upcoming album — either it was never coming out, it was coming out tomorrow, or it had already come out and was being listened to by Tupac and Napoleon on a secret island somewhere.

Here, for your amusement and amazement, is a timeline of the rumors leading up to Fear Inoculum’s release this Friday (special thanks to the folks over at MetalSucks, whose rabid Tool megafandom helped fuel this piece):

February 2008 - Tool are already preparing to record their new album

In an interview with MTV, frontman Maynard James Keenan said that the band were “going to start writing the new Tool record right away.” However, he also made it clear that there was no timetable for the album, and it would come out when it came out.

A reference in the band’s March newsletter suggests that the instrumental members of Tool are getting together to work on the new album while Maynard wraps up his work with Puscifer. The Internet rejoices.

June 2011 - Tool guarantee a new album...when the world is supposed to end

In a post on their website railing against doomsday prophet Harold Camping, Tool “guarantee” a new album in 2012, right around when Camping said the world would end. The joke does not register with all of their fans.

In a post on the band’s website, it’s said that Danny Carey has been playing music that “sounds like Tool.” The writer goes on to say that if they had to guess, the album is more than halfway done.

In his now-deleted 666th Instagram post, Maynard said he was making new music “on ALL fronts,” with an @tool thrown in at the end. This, it should be noted, is the first rumor on this timeline that is perhaps true, as Fear Inoculum took the band around six years to make.

When a fan at a VIP meet-and-greet in Portland asked Adam Jones about the new album, the guitarist joked that the album was “100% done” and would be released “tomorrow.” Said fan was obviously not versed in Tool’s sense of humor, and wrote a story about the quote that was shared all over the Internet. Jones later had to confront the rumor on his Twitter, which we’re sure made everyone involved feel very silly.

In a video on his Facebook, Motorhead drummer Mikkey Dee said that Tool were in the studio next to his. Fans took this to mean that the band were finally recording their new album…until Maynard tweeted at The PRP’s announcement of this news with the hashtag ‘#gullible’.

In an interview with TeamRock, Melvins guitarist Buss Osborne said that the band hadn’t even started recording their new album, and that Adam Jones told him the shortest song on the record is 12 minutes long. Given that the album’s first single, Fear Inoculum, is already under twelve minutes, it stands to reason that either Buzz got bad intel, and/or the band was indeed still in the writing process.

In a Reddit thread that got picked up by Ultimate Guitar, it was posited that Tool had a double album named Decem already mixed, and that it was scheduled to come out in the fall of 2016. The rumor even came with a tracklisting that clocked the album in at over two hours. Maynard, in his infinite wisdom, responded with a succinct hashtag:

A graphic appeared on Twitter and Reddit that a massive announcement about the new Tool album would occur on the Adult Swim show World Peace. The whole thing was, predictably, a hoax, and the album continued to be unannounced.

In an interview on the MetalSucks podcast, Danny Carey said that the album would be out in 2018. This is also the moment in this timeline at which these “rumors” become possible misconceptions and/or miscommunications among the bandmates and their team, rather than straight-up speculation.

February 2018 - A new Tool video will come out this year

In an interview with Yutani.blog, visual artist Dominic Hailstone — known for creating concept art on such projects as Alien: Covenant — says that a new Tool video would drop later this year. Whether or not Hailstone had actually done work on a new Tool video remains to be seen, but it obviously did not come out in 2018.

January 2019 - The new Tool album will arrive in April

In January, Danny Carey claimed that Tool’s new album would be released in April of 2019. Though closer than any other rumor, this one was later proved false by Maynard who responded with his customary long-windedness: “No.”

The rumors come to an end as Tool reveal their new album’s actual release date. This is shortly followed by a cover reveal and the first single (which can be heard below). The world rejoices as though having discovered the existence of Santa Claus, and prepares for the madness that will no doubt ensue this Friday.