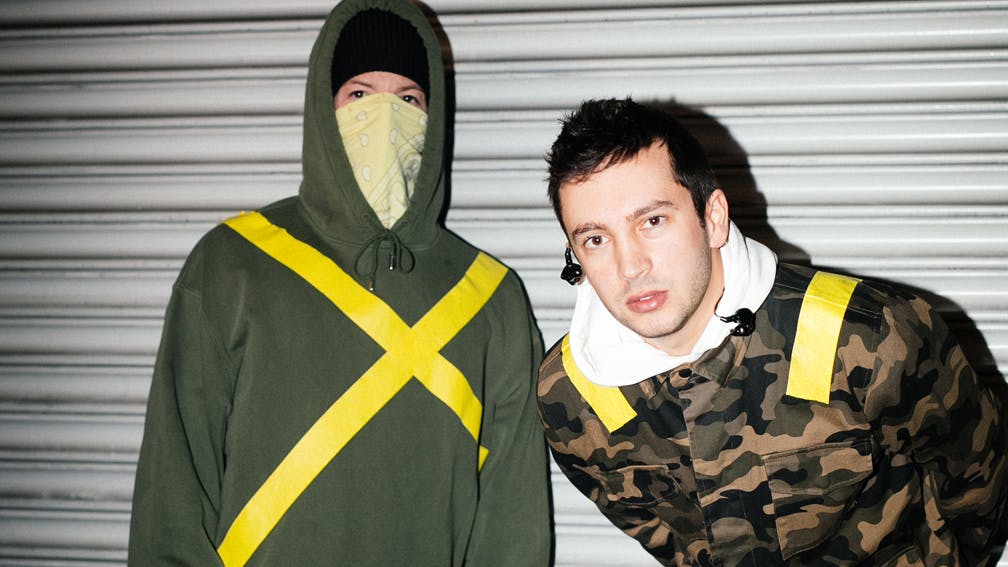 The impact that twenty one pilots have on fans' lives with their heartfelt honesty is incomparable. But what inspired Tyler Joseph and Josh Dun? Donkey Kong, apparently...

The first song that I remember hearing…Barbara Streisand – Hello, Dolly! (1969)

Tyler: “I don’t know how old I was, but my mom and dad would sing it – poorly, in fact! ‘(Impersonates Louis Armstrong) You’re still glowin’ / You’re still crowin’ / Mmm…’ My dad would do the growly voice and my mom would do Barbra Streisand.”

The song that reminds me of my childhood…Donkey Kong Country – King K. Rool (Final Boss) (1994)

Tyler: “Oh my gosh, I love that song with all my heart! I spent a long time on that game, and I still play it every once in a while. When I hear it now, I can see the living room of my house, and we’re trying to get the last few games in before my mom tells my brother to go to bed. That’s my childhood.”

Tyler: “I was writing songs before I realised that I wanted to be in a band. I definitely wrote a song like Trees before I even fathomed actually playing it in front of people.”

Tyler: “It was when they played the Newport Music Hall in Columbus. I went nuts for that show, and honestly at that point you’re not really listening to the song – you’re just trying to stay alive and not suffocate (laughs).”

Josh: “I was in downtown Columbus, for the Fourth of July, and I rode my bike down there to meet with some friends for the fireworks. But I got down there and there’s, like, 200,000 people…”

Josh: “So, there’s a lot of people (laughs). I get down there and realise that, because there’s so many people, I have no cell service. So I was just like, ‘Well, I’m gonna watch the fireworks by myself.’ So I just put my bicycle down and sat by it, and the radio station in Columbus – there’s a station that plays a playlist for the fireworks, and everyone tunes in – played that song, and it was the first time I’d ever heard it on the radio. Even though I was by myself, I felt like there were people turning around surrounding me that knew it, and it was one of the weirdest things. Even now it still feels kinda weird, but it’s really cool.”

Tyler: “It’ll never not be weird!”

Josh: “As a teenager playing music and hoping for your band to make it, you maybe sort of imagine hearing your song on the radio, but that’s a big deal.”

My favourite song to play live…twenty one pilots – Jumpsuit (2018)

Tyler: “Jumpsuit has taken the top spot pretty quickly. It’s exactly what I saw in my head when I was writing it – I knew it was going to be at the top of [Trench] and the top of the show. I think the song gives off the energy that is required to be injected into a room that can sustain for the course of an entire set. It’s a very useful song.”

Josh: “Yeah, I like to wallow in it when I’m sad. Or Sigur Rós. I like Fljótavík, and there’s naked guys on the cover, so that’s cool (laughs). It feels like it’s a soundtrack to my thoughts…”

Tyler: “Yeah, Sigur Rós songs always lack a bit of a set tempo or structure – and that’s always the most difficult type of song to write. But a lot of times, what you’re going through and the emotions that you’re wanting to enhance while listening to a song feels best when there are no boundaries or guidelines in the actual sonics that are coming through to you. That’s what Sigur Rós do so well.”

Tyler: “Bawitdaba by Kid Rock. We’ve listened to that a lot (laughs).”

Josh: “We keep bringing up Death Cab, but we listen to them a lot, too. Bixby Canyon Bridge is a good one.”

Tyler: “‘(Starts singing loudly) The Bixby Caaaanyon Bridge!’ That’s a good chorus for when you’re driving and you get to a stoplight, perfectly timed with when the bass and drums drop!”

Josh: “Does playing Trees every night make me sick of it? No!”