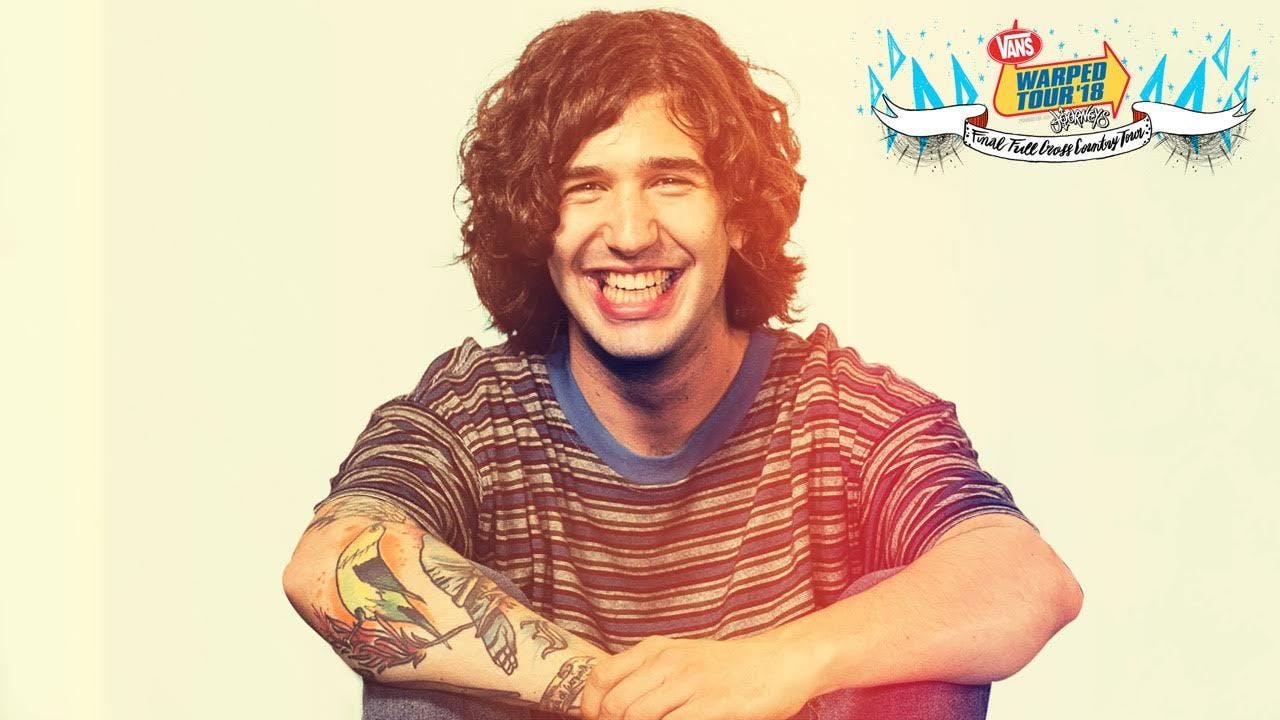 Dan Lambton went to his first Warped Tour in 2006 as a wide-eyed 15-year-old kid and has been going ever since. Seven years later, however, he was no longer attending as a fan, but as the singer of cerebral and emotionally-vulnerable pop-punks Real Friends.

Formed in a suburb of Chicago called Tinley Park in 2010, the five-piece first performed at Warped in the summer of 2013, playing 13 dates of the travelling festival on one of the smaller stages. By 2016 – their third time on the tour – they’d graduated to playing its main stage, somewhere they’ve found themselves again on this year’s final cross-country run.

They are, then, a band who may well have cemented a place for themselves as regular Warped headliners for years to come, had festival founder Kevin Lyman not decided that 2018 was going to be its last year. As bittersweet as that may be for Real Friends, Dan is nevertheless full of a positive energy and attitude about Warped coming to a close, and immensely thankful that he and his band even got the chance to play it at all – let alone headline it twice.

How has this final run of Warped been for you, Dan?
It’s been awesome. We’re at technically the halfway point as far as days go, but in terms of shows there’s a 20 day stretch that’s about to happen where two-thirds of the shows are taking place. So the fractions are a little up in the air right now, but it’s been a great time.

How many times have Real Friends played Warped before and how do you feel about being part of its last ever cross-country run?
This is our fourth time on Warped Tour in some capacity and I’m not 100 per cent sure how I feel right now. I thought I knew, but I feel like it won’t fully hit me until either it’s over this summer, or next summer rolls around and Warped Tour isn’t a thing. Because I grew up going to Warped Tour since I was 15 in 2006. I’m 27 now, so it’s been a big part of my summers. I always looked forward to it every year and I got to see a lot of my favourite bands like Senses Fail, Circa Survive, Motion City Soundtrack, The Starting Line, The Matches, Set Your Goals, Four Year Strong, Every Time I Die – the list goes on and on. Every year, it didn’t matter how few or how many bands there were – I always wanted to go and experience it. It was my Christmas every year.

What was it like making the transition from fan to artist? It sounds like it must have been a dream come true...
It was definitely surreal. We did it for the first time, in a van, in 2013, and I just remember it was awesome. It didn’t matter that we were burning our asses off in the heat and not necessarily having AC to go to at any point in the day like we do now with the RV that we have. It was still awesome. We just took what was given to us and we ran with it, and we loved every second of it.

You’re playing the main stage this year, which means you’re one of the headlining bands on this final run. How has that been?
It’s been awesome! We’re lucky enough to have this be our second time playing on the main stage. The whole stage crew is awesome, all the bands that are on the main stage are awesome, we have a lot of friends out on the tour – it’s been a great time. And the kids coming out to the shows are very receptive of everything – they just want to come out and see bands. It doesn’t matter how long they’ve been there or how much heat there’s been or how much rain there’s been. I just think everybody here wants to have a good time.

How would you say Warped has helped you over the years – either as someone coming as a fan or as a member of a band? Or both! What has it given you?
Honestly, as a fan, I think it’s given me some of the first opportunities to see a lot of my favourite bands and as an artist it’s given us a lot of our first opportunities. Like, Warped Tour was one of our first opportunities to go to the West Coast when we started playing it in 2013. They gave us a lot of chances early on that I feel like exposed us to a lot of new people – especially with the way the dual stage set-up is with the stages we were playing, because sometimes we’d be playing next to a band that would be completely different to us, but just because we were playing next and some people didn’t necessarily have another band to go see, they’d just go to the next stage and watch us and have a new band to listen to. And that’s the same with any other band – and it’s great because the schedule isn’t set every day, so people can’t just go at 6pm and see band A or come at 2pm to see band B and just leave. They have to come early in the day, they get the schedule and they’re there for the entire day, so in the lulls they’re able to go and maybe sit in the amphitheatre and while they’re catching their breath or whatnot they get to see a couple of bands that might not have gotten to see otherwise. I think that’s a great opportunity for new bands and old bands alike to capture some new fans.

As an artist, what do you think about the sense of community of Warped Tour? Are bands always helping each other out, or can it become a little tribal depending on genre?
I think that there can definitely be cliques – not necessarily in bad way, just on terms of the bands that you’re put around – but I think that everybody wants to help each other and wants to keep each other safe throughout the process. Like, we’re going into this 20 day stretch and I think everybody is going to want to be having people around them that they know and be able to blow off steam and have something to do and be able to be there for each other if it gets a little difficult. So I’d say it is a little bit of both. There are people that I never would have thought I’d meet on Warped Tour and then there are some people we don’t encounter for the entire tour and don’t know.

Do you have a highlight of this Warped Tour – and of your entire history of going to it, either as a fan or playing in Real Friends?
So far, I think, one of our collective favourite shows has been in San Antonio. I don’t really know what it was, but I feel like everything just kind of clicked there with us and the crowd and everybody in the band. Because this Warped Tour was the first tour we’ve done all year and it’s the first tour we’ve done in about six or seven months since we went out with Neck Deep and As It Is in the UK and Europe back in November. So I feel like it did take us a little while to get back in the swing of things, but once we did I feel like it was in San Antonio and it just all felt really good and it’s been clicking ever since. And then overall, I’d say anytime we get to play Warped Tour in Tinley Park, Illinois, which is the Chicago area date of it, is just really special, because that’s where I got to see all of those bands I was talking about earlier, where I’d go to Warped Tour every year. I remember the first time we played it, we played in the amphitheatre and there’s just something indescribable about it. The first Warped Tour that we did, we only did the West Coast and we didn’t get to play the Tinley Park date, so to be able to get to experience the whole tour and then get to play the hometown date, there’s something really special about that. I don’t think any of us will ever forget that.

Warped is obviously very important to this scene and to alternative music and culture. Do you think anything can replace it or will there just be a huge vacuum once it’s gone?
I don’t know. I keep hearing all these things that somebody’s going to come up and fill that gap, but I feel like it wouldn’t be the same. But on one hand, maybe it’s good that there’ll be fresh blood out there making a new tour and starting something new and exciting. Not to say anything against Warped Tour, but maybe it would be a good thing for a new tour to sprout up in its place and maybe have some different bands playing and mixing that might not have happened during Warped Tour. It’s really hard to say, but I hope somebody can step up because it’s definitely going to be a little more difficult at first for some bands to find something to do to fill the summer. A lot of us depend on Warped Tour to fill that void.

Be sure to check out our Warped Tour playlist on Spotify...

There's a brand-new single, too!