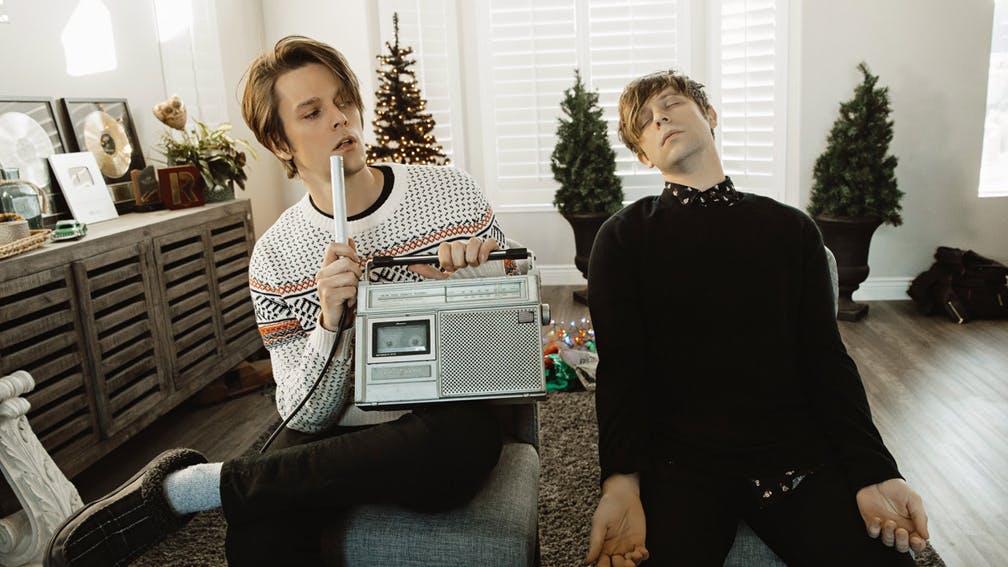 Following last Friday's surprise release of their three-track Christmas Drag EP, iDKHOW have unveiled a suitably festive video for their cover of Slade's Merry Christmas Everybody.

In the clip, the duo – Dallon Weekes and Ryan Seaman – are looking all ready for the big day, though drummer Ryan doesn't seem quite as into things as the frontman. In fact, he barely even notices being tied up in lights. Maybe he's having a post-Christmas dinner nap or something?

Read this next: Dallon Weekes on iDKHOW's debut album

Merry Christmas Everybody takes its place on the Christmas Drag EP between the title-track and Oh Noel. “I wrote Christmas Drag over a decade ago," Dallon explains. "I’ve always been a sucker for Christmas music, and this was one of the first Christmas songs I ever wrote for myself. I’m happy I got a chance to give it a proper recording and release. Oh Noel was recorded in one take, on the first try. I recorded it with a fella named Stu Maxfield, who is this fantastic musician from Provo. After we did the first pass, the engineer asked us if we wanted another take. We looked at each other and said no at the same time. A pretty special studio moment."

Watch the video for Merry Christmas Everybody below:

Catch iDKHOW at the following dates this year:

Read this next: A rare and revealing interview with blink-182's Travis Barker