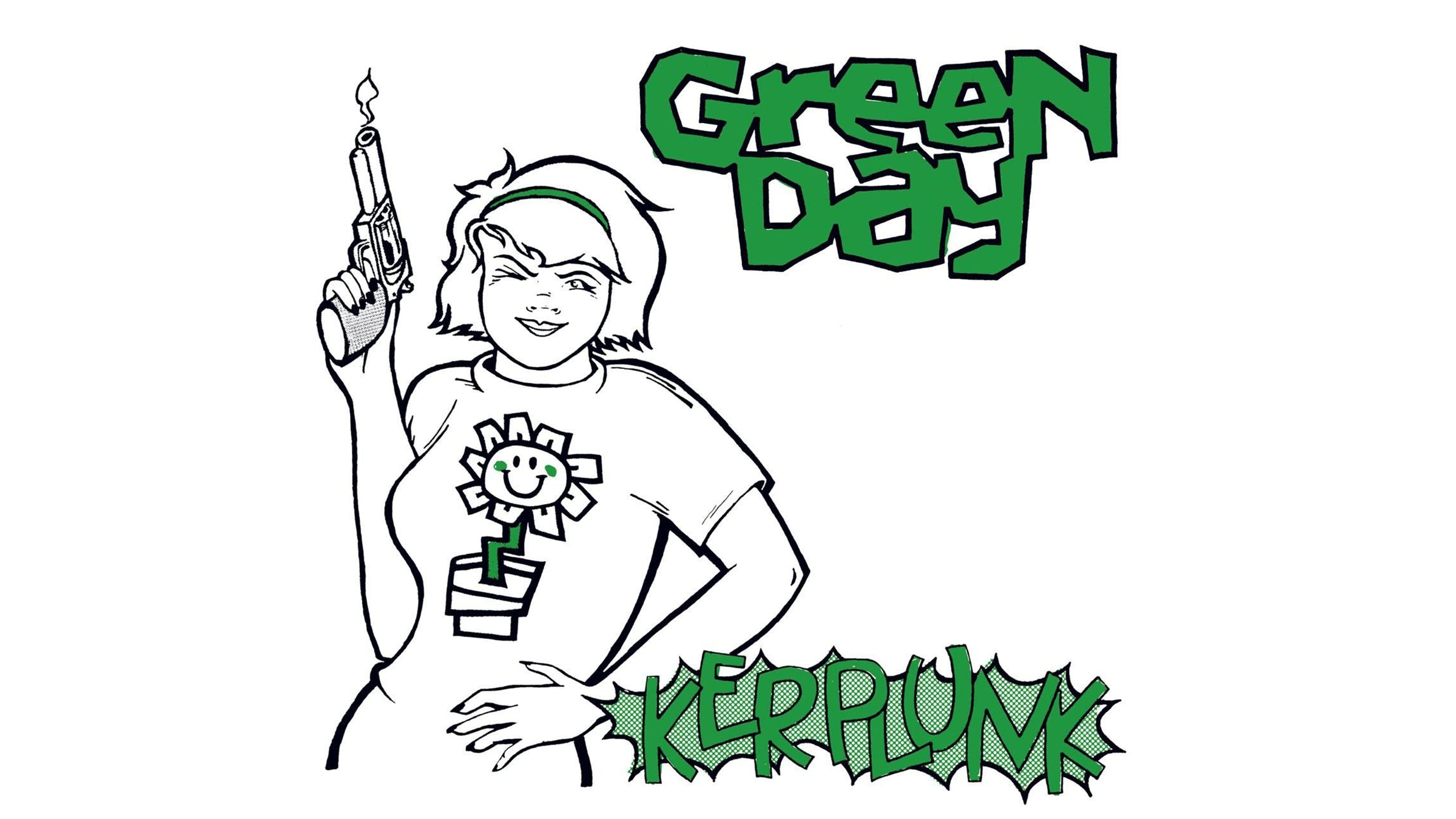 On December 17, 1991, Green Day were presented with vinyl copies of their second album, Kerplunk. On this chilly winter’s evening, the band were appearing at the Joiners Arms in Southampton, an event that quickly became an impromptu album release party at which the musicians wore all of the clothes and wigs they’d accumulated during their first overseas tour, and which culminated with Billie Joe Armstrong falling off the stage.

By this point Green Day had been in Europe for almost two months. The band travelled in a van that caught fire en route to snowbound gigs at which four people had paid entry. One night they slept in a storeroom alongside a human head in a jar of formaldehyde. On another, their place of rest was a venue in Copenhagen in which a couple noisily had sex on the stage. In Germany, they had a gun pulled on them. In Wigan, the trio staged a nativity play that featured the Easter Bunny and Santa Claus, and in which Tré Cool played the role of baby Jesus. Days later, the three Californians spent Christmas Day in a squat in Bath taking magic mushrooms and inhaling the smoke from pot that had been placed on hot knives. By the tour’s end, Billie Joe Armstrong had spent so much time in Germany that his speech had slowed and he had lost much of his Californian accent. Conditions were so squalid that the frontman contracted body lice and was required to shave every hair from his body.

“When we got to Europe we didn’t know anything,” says the frontman. “We were, like, ‘Sure, let’s book some shows in Europe!’ But when we got there, suddenly we were nervous. Some of those shows were scary. We were in a situation where a band on tour has to lose their minds and be able to find each other to try and make life make sense again. That’s why people quit, because they start losing their minds. We felt like we were a bunch of clowns in a small car. It was great.”

The records that Green Day held in their hands in Southampton were brought to them by Larry Livermore. At Heathrow, the Lookout! boss employed the technique of talking until the listener loses the will to live in order to convince a Customs and Excise officer that the albums he was ferrying into the UK were intended only as gifts. As he exited the airport, he had no idea that the music he was carrying would be the last the band would record for his label.

Comprising 12 tracks, Kerplunk was slow to cohere. As the band’s attention turned to returning once more to Art Of Ears studios, Billie Joe realised that material was in short supply and so began looking at half-remembered and unfinished songs that might prove ripe for excavation. One of these rescued gems tells of the experience of swapping a family home in Rodeo for a squat on the mean streets of Oakland. Written in the form of a letter to his mother, the song was titled Welcome To Paradise, and it would prove to be so evergreen that it has remained a staple of the band’s live set for 30 years. “It would have been a nightmare had we not put it on there,” laughs Billie Joe today. The track – later re-recorded for inclusion on Dookie – joins Christie Road, 2000 Light Years Away and One Of My Lies among Kerplunk’s finest moments.

Within 11 hours of the vinyl release of Green Day’s new album (the CD version was issued one month later), the record had sold 10,000 copies in the United States alone. Within a year, Kerplunk had made its way into the homes of 50,000 American listeners. By this point, the band was playing to as many as 2,000 people a night, and demand for their music was such that Lookout! Records could no longer keep pace.

Mike Dirnt recalls a show at the City Gardens in New Jersey in January of 1993 at which many fans complained to him that copies of Kerplunk were hard to come by. On the pavement outside a club that had paid the Californians a fee four times in excess of their guarantee, the bassist “kept being asked again and again, ‘Where can I get Kerplunk?’ And I was saying, ‘We’ve got to get our records out to more people, man.’ We were bottlenecked. We couldn’t sell as many records as we were drawing people.”

By this point, word on the streets of the East Bay was that Green Day were interested in a new record deal. Increasingly concerned, Larry Livermore convened a meeting with the band at the Au Coquelet eatery in Berkeley at which Billie Joe informed him of their desire to move on to pastures new.

At a second meeting the following week, the two parties met and agreed the terms of their separation. Larry handed the band a contract which read, ‘Lookout! Records and Green Day agree to treat each other with respect and openness at all times, and recognise that while this agreement provides specific guidelines as to what is expected of each other, the truest contract is one based on trust and friendship.’ Next to his signature, Billie Joe drew a doodle of an amplifier. The band made no effort to reclaim ownership of the music they recorded for Lookout! Records for as long as Larry worked there, and only did years later after a legal dispute over unpaid royalties.

With this, in 1993 Green Day were at liberty to sign a new recording contract with any company of their choosing. Despite numerous suitors, the label they chose was Warner Bros., for which the band were awarded an advance of $225,000. The man who signed them was Rob Cavallo, a then low-ranking A&R employee who would also become their producer. That same year, Green Day and Rob would unite to record an album that would help change the fortunes of punk rock forever…