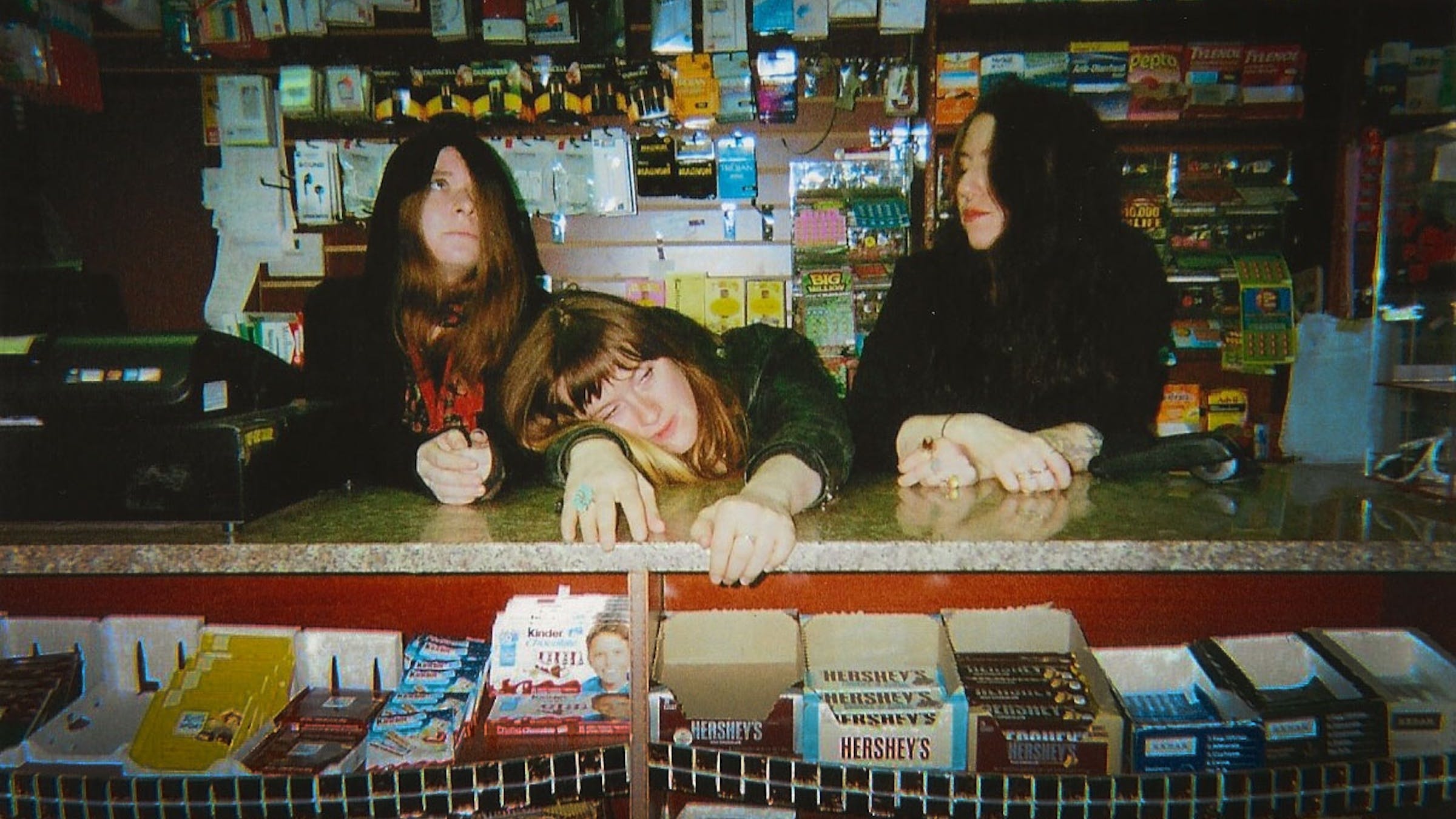 The harsh truth about Weeping Icon is how relatable their music is. The Brooklyn three-piece's imbalanced, noise-driven riot grrl may feel a little ambitious for your average punk rock head. But the more one listens to it, the more one begins to hear the chaos and disassociation of life in 2019 echoing back at them through it. As such, the band feel less like simple reactionary punks, and more like the part of your conscience telling you to have another smoke because everything's on fire anyway.

The trio's new self-titled LP is a reverb-drenched journey into what you think about during your commute. The band combine fast, unstable punk and echoing noise rock, with just a pinch of growling garage menace thrown on top. Tracks Be Anti and Like Envy confront social media's stranglehold over our self-esteem, while Power Trip and Natural Selection take darker, more introspective looks at modern-day survival, all with ambient numbers like (in the news) dividing them up. The result is a record that feels familiar in an awesome if disheartening way.

We caught up with Weeping Icon and spoke to them about where they're coming from, and what keeps their hackles so raised.

What are you most excited for fans to hear on the new album?

It’s been a couple years since we released our first EP, which for us, was very much a fresh and raw burst of energy. We’ve developed a lot as a creative unit and as individuals over the past couple years, and that change is documented over the course of the album. We’re really excited to share the lyrical content, which moves beyond the pre-#metoo-era fury that was stirring so much a couple years ago (which drove a lot of the prior album), and into vaster territories of generational existential woe. The sociopolitical climate over the past couple years has obviously been pretty morose and it’s reflected in the heaviness of the music we wrote. We try to be intentional with every aspect of our art, so it’ll be interesting to see people’s reactions to the deeply mediated choices we made throughout these divisive, frictional times.

You hit a solid middle ground between punk, indie rock, shoegaze, and other genres -- is that your patented sound, or something that's evolving? Do you have a name for it?

We don’t exactly have a name for what we do -- we tend to change the genres and musical references we use to explain our music a lot. It might make it hard to pinpoint what Weeping Icon is in the greater musical landscape, but our music is a direct reflection of what we like and how we’re feeling at any given time, so it’ll always be subject to change. We love a lot of genres so it’s kind of all in there and will probably get weirder over time. It’s fun to hear what others hear in our music though, so if you have a good comparison or name for what we do, we’re all ears!

You guys have a specifically New York feel to your music. What is it about New York that inspires or informs Weeping Icon's sound?

Growing up in a city like this seasons you. Every opinion is in your face, every disagreement under the sun plays out before you, and by the time you’re a young teen you’ve seen pretty much everything humanity has to offer. The only place you can go from there is to contemplate the psychology of everything around you. Spending our lives sardined into a handful of miles with another eight million people has made us fiercely defensive of morality, equality, respect of others’ experiences and social justice. Watching so many people fight to be heard over the cacophony of personalities and capitalist trash demanding your attention at all times makes you really think before opening your mouth to say your piece. It’s given us a sense that art must be worth the attention it asks for.

The more traditional songs on the album are divided up with ambient instrumental tracks. What do these interludes bring to the table?

The interludes between songs evolved from a trick we used when we started playing live to cut out the awkwardness of silence, stage banter, applause. We just kept the sounds going, which felt good to us, because the performance stayed intentional, and it also provided a freedom to explore our most bizarre and abrasive creative impulses without muddying the more intentional aspects of our project. Over time we’ve likened the interludes to meditations, because they serve as breathing room between all of the intense subject matter we work through in our songs. They’re kind of like recitative between arias in opera music, but for noise-heads.

Both the Ripe For Consumption and Like Envy videos have focus on cell phones. What is it about that technology that draws or fascinates you -- or does it just inundate your everyday life?

It’s cool that you mention this, because we’ve realized over the past year that it’s the theme we want to expand on the most within the visual/conceptual aspect of our project. Our concept for the Weeping Icon (traditionally statues of Christian saints that are said to cry tears or blood) is a motherlike figure who cries for our generation, and what we have lost in this rapidly evolving technological landscape (not just outdated tech items like VCRs and clunky keyboards, but broader concepts, like what we lose when we blur the lines between personal identity and brand identity in our social media expression). We think of our Weeping Icon as a figure who lives in a digital anti-reality where old technology and all of the idling, forgotten history documented on the internet goes to waste away for eternity.

Being part of the last generation to remember a time before internet and 24-7 connectivity, we’ve seen so much old tech disappear from the common consciousness. So we’re really fascinated by this concept and love to incorporate tech nostalgia as much as possible in our art. We actually created an art installation this summer called Ritual Wateland (alongside a lathe of noise music with accompanying zine by the same title released by Cold Moon Records) and we’re hoping to create more installations based on this developing idea in the future.

Check out our exclusive stream of Weeping Icon's self-titled album below:

New Yorkers should make sure to catch the band live tonight at their record release show at Saint Vitus in Greenpoint, Brooklyn.