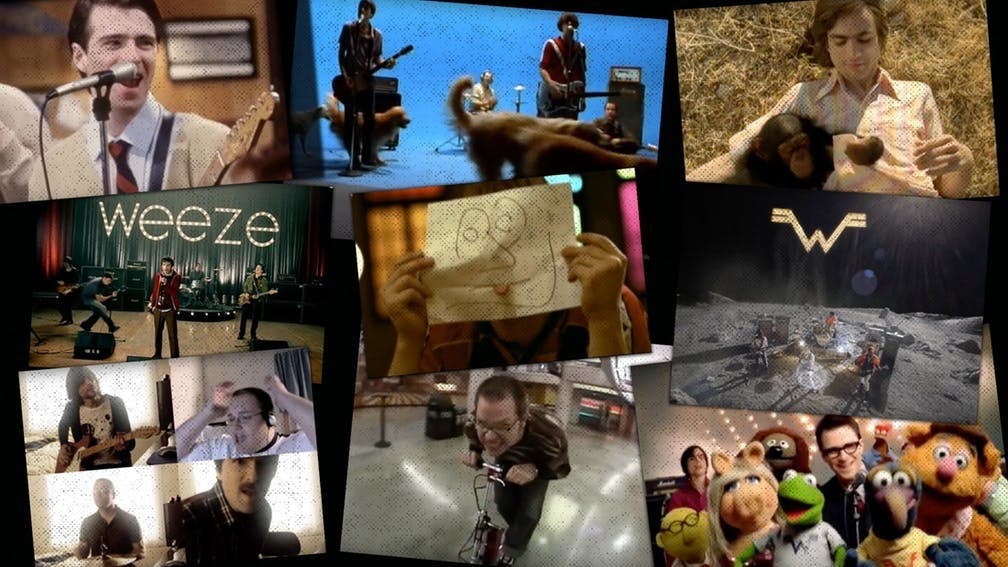 Nerdy rock legends Weezer have made close to 40 music videos over their long and varied career. They’ve made expensive videos, cheap videos, high-concept ones and super simple ones. There are some real curiosities in there: frontman Rivers Cuomo’s dedication to off-putting weirdness in Troublemaker (where he sports fake tattoos, a moustache and the worst-fitting baseball cap in rock history), the incongruity of the Weezer / The Girls Next Door crossover presented in Beverly Hills, the unheimlich special effects of (If You’re Wondering If I Want You To) I Want You To or the slightly creepy rom-com of Go Away. But there are also masterpieces – iconic, era-defining clips that helped make millions of fans fall in love with them and commit themselves to the agony that is being a Weezer fan.

It’s hard to rank the best into an ordered top 10, but here we go…

An internet time capsule, the GRAMMY-winning Pork And Beans video makes little sense these days. In what must have been a complete admin nightmare, it brings together dozens of the stars and concepts of 2008 and 2009’s biggest YouTube videos – people like Tay Zonday, Afro Ninja and Chris Crocker, Fensler Films’ GI Joe videos and Mentos being dropped into Diet Coke. Watched over a decade later, some of it is completely incomprehensible, but as a celebration of online creativity, collective silliness and wasted fizzy drinks. It’s pretty infectious.

A celebration of touring life as a band of nerds, stitched together from hours of behind-the-scenes footage, Photograph is as unpolished and non-flashy as it gets, full of terribly-lit shots of quite average football on a cloudy day and the band doing decidedly non-stunning things like walking across a road wearing a jacket. That’s the thing that’s always made Weezer such a fascinating band, though – that seeming contradiction where they are simultaneously stadium-filling rock stars and polite, pleasant chaps away from the stage. Plus, there’s a barely-clad Tenacious D!

8. Back To The Shack

One of the more bombastic videos in Weezer’s oeuvre, all lens-flare, slow-mo, glistening chrome and dust clouds, glamorous, lingering jumping shots and guitar close-ups. It fits the song perfectly, though – a back-to-badass-basics manifesto, and a ‘no gimmicks other than being on the moon’ performance video that is majestic as fuck. It also features the best culmination of a slow-motion shot in music video history, the perfectly-timed tom and snare hit after the line, ‘And Pat should play the drums.’

A deadpan acting showcase for drummer Pat Wilson who, just like Sir Michael Caine in A Muppet Christmas Carol, manages to completely hold his own performing with the Muppets. From penguin backing vocalists to Statler and Waldorf’s pleasingly crappy post-heckle, to Animal’s drumming, and Chekhov’s Lampshade being deployed, it’s a total delight throughout. It’s also pretty adorable – look at Rivers’ childlike delight at the beginning as he interacts with Kermit and Fozzie, and barely-contained glee throughout. Bonus points for bassist Scott Shriner’s excellent ‘For good luck rub my tummy’ shirt.

A simple combination of high-end lighting and low-end farting about, El Scorcho features four very different performances: Rivers like a rabbit in headlights, guitarist Brian Bell giving it the full flamboyant treatment, Pat channelling his inner robot (and, momentarily, chicken) and bassist Matt Sharp being silly. It’s an inconsequential video, what looks like an afternoon or so’s work, but at the same time it really makes you want to stop what you’re doing, put responsibilities aside and form a band immediately.

A non-canon origin story, the Perfect Situation video repositions Rivers as the long-suffering boyfriend/mic-tech of ‘Weeze’ frontwoman Elisha Cuthbert (of 24 fame). She plays a pissed-up, violent, egocentric monster, mistreating the rest of the band and laid in the recovery position by her put-upon beau, until a no-show leads to him stepping up to the mic, reinventing the band and creating a legend. It doesn’t really make sense, but it works, and Elisha’s excellent performance coaxes an equally great one out of Rivers. With nods to Van Halen’s famous M&Ms story, a cameo by Weezer’s webmaster/archivist Karl Koch as the merch guy and fantastic accessorising work, particularly by Pat and Scott, it’s an oddly moving, miniature A Star Is Born. (The entire crowd is breaking the cardinal rule of non-Maiden band shirts, but that’s forgivable.)

4. Island In The Sun (second version)

There was a previous video made for Island In The Sun, a perfectly fine one directed by Marcos Siega set around a Mexican wedding, but supposedly MTV executives weren’t fans. So they drafted in Spike Jonze to film another one, resulting in this sun-soaked, whisker-filled, mammal-tastic clip, featuring Rivers, Brian and Pat – ex-bassist Mikey Welsh had freshly left the band – cavorting with ridiculously beautiful baby animals on a hill outside Los Angeles. Never has crawling into a music video to have a big lovely sleep seemed so appealing.

Made while Rivers sported both the worst haircut in the world and the best haircut in the world, this chaotic one-shot video inadvertently featured the band slightly unravelling like the sweater of the song – they had done nearly 20 takes by this one, and a dog had done a shit in the drum kit, and nobody could concentrate anymore. This resulted in mugging, sitting down and outright giving up, and a massive hit video. It also inspired Weezer’s best completely-Weezerless video, a quasi-remake starring ‘Weird Al’ Yankovic for their cover of Toto’s Africa.

Weezer had been away for five years after Pinkerton, but returned with a bang (and a ‘Hurggh!’) with Hash Pipe. Straightforward in concept – alternating between the band performing in a sumo wrestling dohyō, and the wrestlers themselves both competing and singing – but incredibly kinetic and energetic in execution, it’s a bit of a mission statement. ‘We’re back,’ they seem to be saying, ‘and god damn it, we’re Weezer.’ In just under three minutes of glaring, grunting, hair-shaking, unconventional layering and rippling buttock flesh, they stake their claim to the 21st century.

Not just Weezer’s best video, this Happy Days tribute/pastiche is a contender for the greatest music video ever made, a masterpiece of editing that we’ve gone very, very deep into in the past.

The ending theme to Jackass 3D, and featuring the cast on backing vocals, Memories is a sun-bleached Super-8 love letter to summer, skating and stupidity, a nostalgic paean to youth made all the more poignant by the presence of the late Ryan Dunn. End-of-an-era stuff that conjures up a bunch of pollen in the air every time.

The band’s first song to ever feature the F-word has a nonetheless magnificent video centred on a truly committed performance from U.S. comedian Patton Oswalt as a bumbagged, crotch-chopping mega-patriot. The band’s presence is limited to Rivers’ appearance as a Secret Service agent, though, which excludes it from a place on the main list, probably.

Oh, you’re into Weezer? You get we’ve got a ton of stuff about Weezer, right?