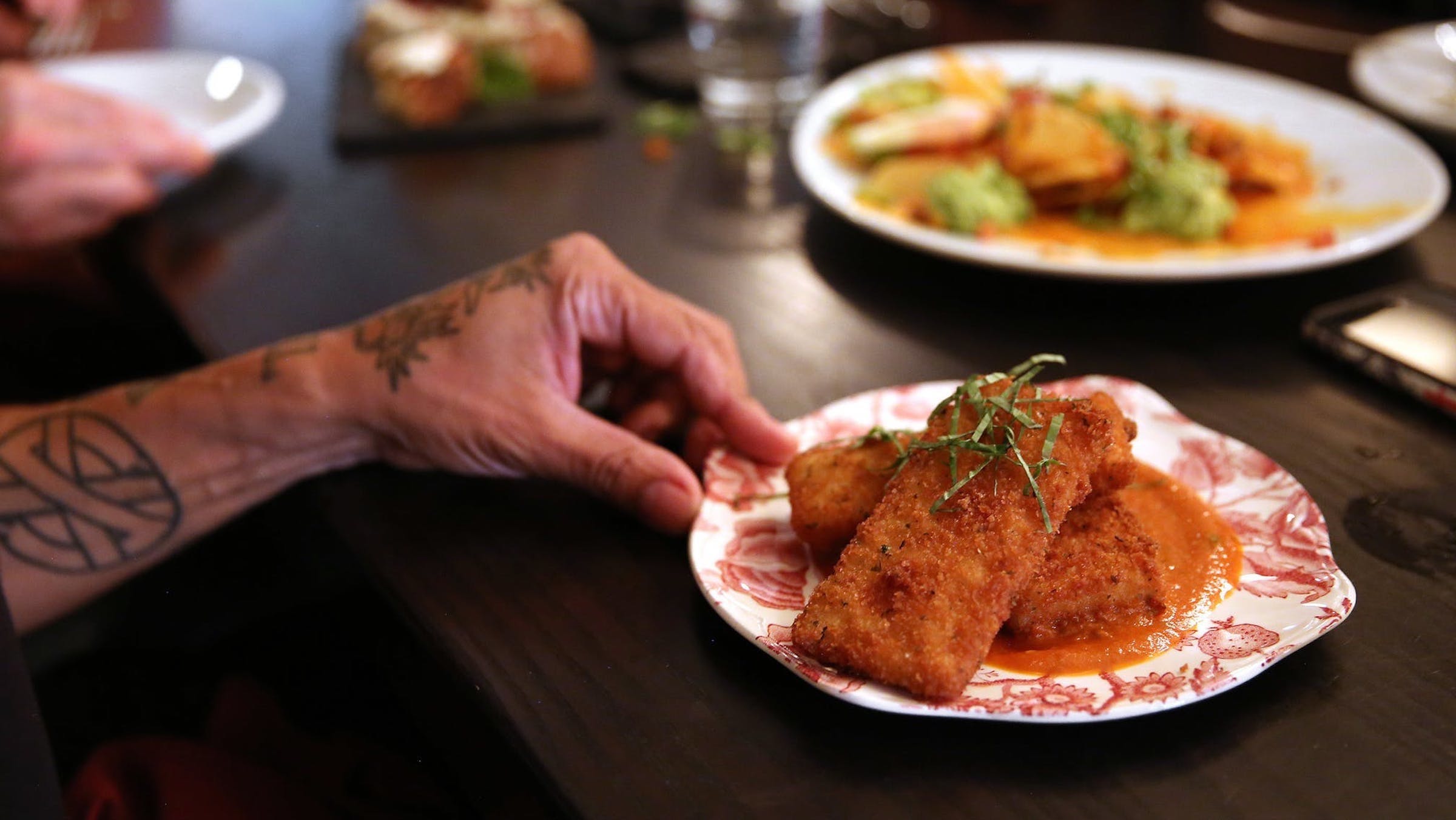 In March, I had the privilege of interviewing a table full of metal, punk, and hardcore stars as part of a feature on veganism in extreme music. Around the table were John Joseph of Cro-Mags, Sergio Vega of Deftones and Quicksand, Alissa White-Gluz of Arch Enemy, and Doyle of The Misfits. While it was an honor to break bread with these musicians – delicious, cruelty-free bread, courtesy of Brooklyn’s Modern Love – it was Doyle that hit me the hardest. As a kid obsessed with horror and sleaze, the Misfits shaped me deeply as a teenager, and seeing Doyle in his devilock and ghoul paint made me a giddy fanboy.

“We should do an elementary school trip to the slaughterhouse!” said the guitarist during our dinner. “We can give them a first-hand experience at what is going on. What if an alien race came down and started eating all of us? That would be so fucked up. But it’s totally okay if we do it to a race we consider smaller than ours, right?”

Listening to these musicians talk about the benefits of veganism – and the horrors of the meat industry – inspired me. My whole life, I’d been an inveterate meat-eater who scoffed at vegans under the basic principle that “meat is good”. But I like to think of myself as a force for good in this world, and taking part in what I know deep down is a cruel industry perpetuated by huge businesses didn’t feel very punk rock. As I walked out of Modern Love, I decided that this year, I would challenge myself. For the entire month of July, I would go vegan. The results didn’t go quite as planned – and taught me a lot about what it means to be hardcore.

A little background: when you imagine a vegan, you picture someone who isn’t me. I’m a hairy, sweaty dude with a beer gut who weighs over 200lbs, and much of that weight comes from a love of junk food. My wife is a professional cake-baker who goes through sticks of butter the way Lemmy ripped through Marlboro Reds. My favorite type of cheese is sauce. This was not going to be easy.

My first day as a vegan was actually pretty nice. A cashew-milk smoothie for breakfast, and a salad with nuts and vegan dressing for lunch. As I walked to Greenpoint’s Saint Vitus Bar that night, I ate a piece of vegan pizza from Williamsburg staple Vinnie’s; the cheese felt like Vaseline in my mouth, and the “pepperoni” squeaked against my teeth, but it wasn’t terrible across the board. This was doable. I could make it happen.

By day two, I was going through full-on withdrawal. Physically, I was fine – but emotionally, I was a goddamn train wreck. I was short with my coworkers and genuinely depressed about my next meal. Getting lunch at the deli that day, I almost ordered a bacon, egg, and cheese sandwich, but I got choked up as I realized that its name was just a list of things I wasn’t supposed to eat. It was a huge wake-up call as to just how much I took comfort in animal products, and how much my diet determined my emotional state. That was bullshit – here I was, tears pricking the backs of my eyes, because I wasn’t allowed to eat ham? Sounds like a pretty lame way to live.

The depression of that second day had opened my eyes. The next week was tough, but I weathered through it, pounding nuts and hummus at every meal, eating rice and beans like it was my job. July 4th was especially brutal, watching my family eat burgers and hot dogs around me with decadent abandon, but I suffered through it. Metal and hardcore had always been about going against the grain for me; I could stand a Garden Burger here and there if it meant being the man I wanted to be.

Strangely enough, though I’ve spent my whole life throwing my lifestyle in the face of anyone who disapproved, I found myself feeling rude when it came to being vegan. When my mom had grimaced at my more intense tattoos in the past, I’d rolled my eyes and told her to get over it. Turning down a dish she’d made, meanwhile, made me feel like a terrible son. The role food plays in society, and the perceived ingratitude of turning it down, became part of my everyday life. It felt good, to force myself to break away from a “normal” way of life, to politely insist on standing for something.

When I broke, I broke hard. I’d just finished covering a gig in Allentown, Pennsylvania, and somehow, as I drove away, I knew I’d cheat. But instead of getting a healthy egg-based meal at a diner, I went straight to Wendy’s and got a Baconator – a half-pound of beef, two slices of American cheese, and six strips of bacon. After the first bite, my entire world was a blur of grease, and by the time I realized what I was doing, the burger was mostly gone and I felt absolutely awful… and I loved it. The messages were clear: first, I was a fucking junkie, addicted to rotgut drive-thru food. The second was that I didn’t want animal products, I wanted crap. Feeling wretched was an inherent part of my love of meat.

The next few weeks, I maintained my veganism, but struggled. After breaking edge for the first time, I wanted to give in entirely – I was no longer a pure vegan, why not just throw it all to the wind – but I knew that was exactly the wrong kind of thinking. Thankfully, there were options available all around me. Indian food became my comfort zone, and peanut butter was my new dessert. It gave me a fresh sense of respect for John Joseph – imagine trying to do this in the ’80s, when most restaurants didn’t know what chickpeas were, much less had them on the menu.

Booze, I quickly found, was my enemy. When I got drunk, the only thing I wanted in this world was chicken tenders; when I was hungover, trying to soak up the poison in my belly with bananas and rice just made me feel worse. All of my other cheating moments came when I was drunk – cheese fries over tiki drinks, pizza after our Frank Iero In Conversation. In the past, I’d always assumed that the correlation between straightedge punk and vegan hardcore was about the two lifestyle choices’ unity in patting themselves on the back. Now, I knew that they were united in being true to yourself, and your principles.

That was the biggest lesson of my month as a vegan: despite what I told myself, my principles were kind of weak. I dreaded discomfort and embraced laziness in the face of adversity. While discussing how hard going vegan was for me, I told my wife that I couldn’t understand how someone like Alissa White-Gluz does it her whole life. My wife responded, “Well, she believes in this. You’re just trying it, but for her, it’s the right thing to do.”

In the past, I’d ripped on vegans for acting self-important because it made them feel cool, or different, or better than anyone. But 30 days as a vegan showed me that it was about more than that – it was about refusing to bow to pressure, and standing up for what you believe. That’s always been extreme music’s most important tennet: do what’s right, and fuck the world for trying to convince you otherwise. Not only was I kowtowing to society’s pressures, but I was giving into my baser need for gross, easy stimulation. That’s not punk rock, never has been, never will be.

Full disclosure: I’m no longer a vegan, but I’m significantly less dependent on meat and cheese than I was. My vegan July showed me that I didn’t need animal products all the time, and that my body could certainly stand for a break from them here and there (I lost about five pounds thanks to cutting out meat, dairy, and eggs). But more than that, it taught me that you can’t be truly honest with yourself about your principles unless you test them. Hardcore is about not turning away from the ugly and unpleasant things in the world just because it’s easier to do so. You might think you can handle that – but you’ll never know until you push yourself. Either you’re brave enough to make the effort, or you’re just like everyone else.